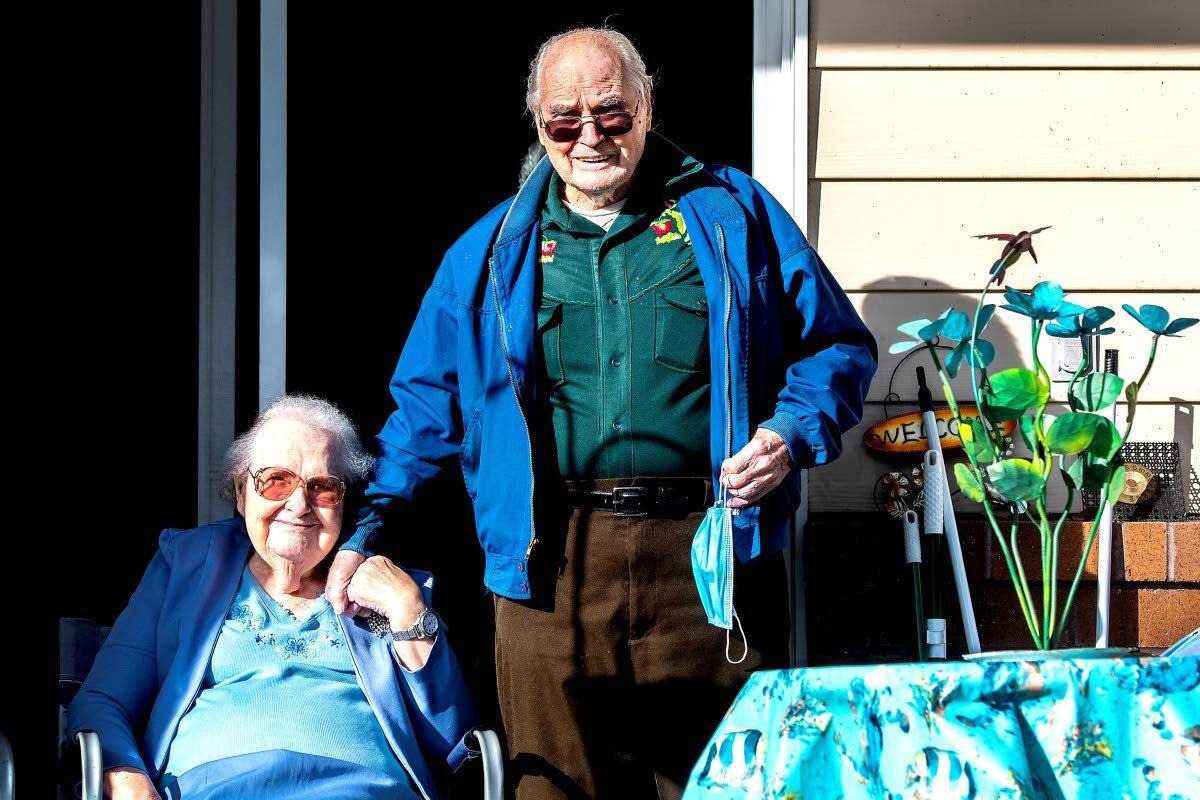 Jesse Main, 96, and Ethel Main, 93, pose for a portrait outside their home at Brookside Landing in Orofino. The two will celebrate their 75th wedding anniversary today. 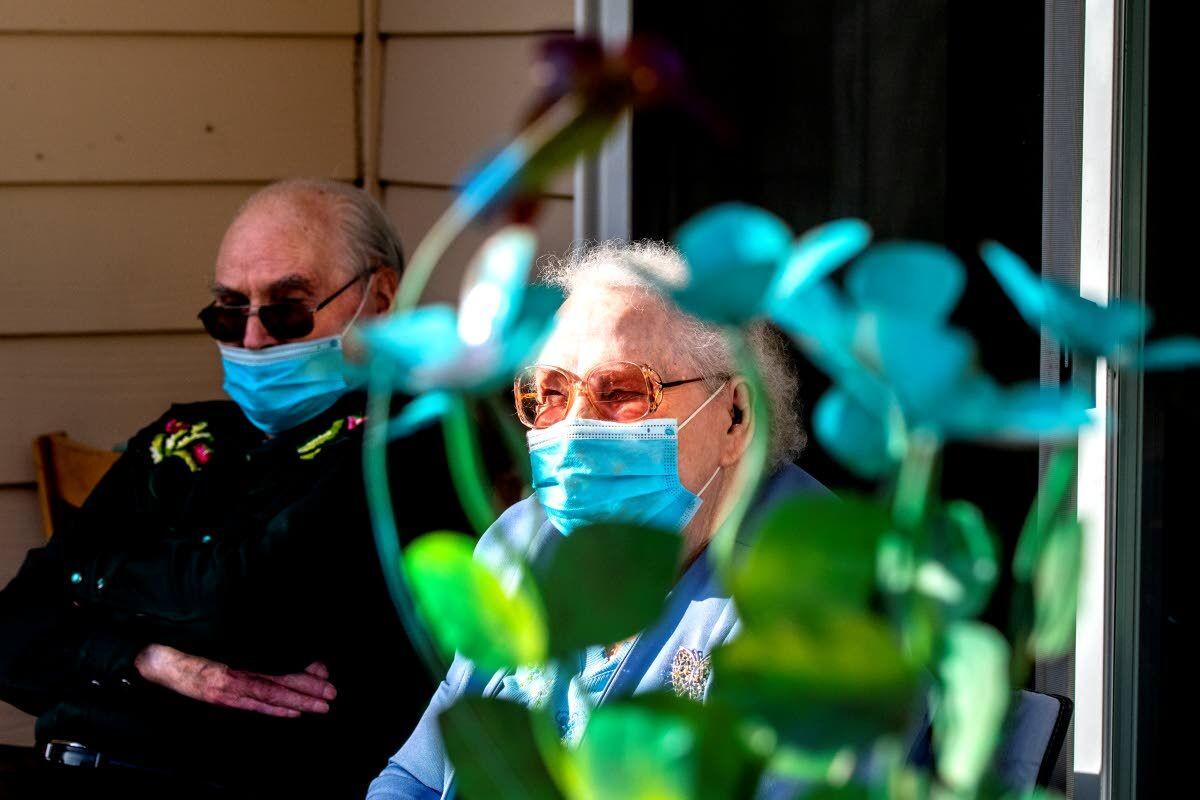 Ethel Main talks about her 75-year marriage to Jesse Main on their patio at Brookside Living in Orofino last week. 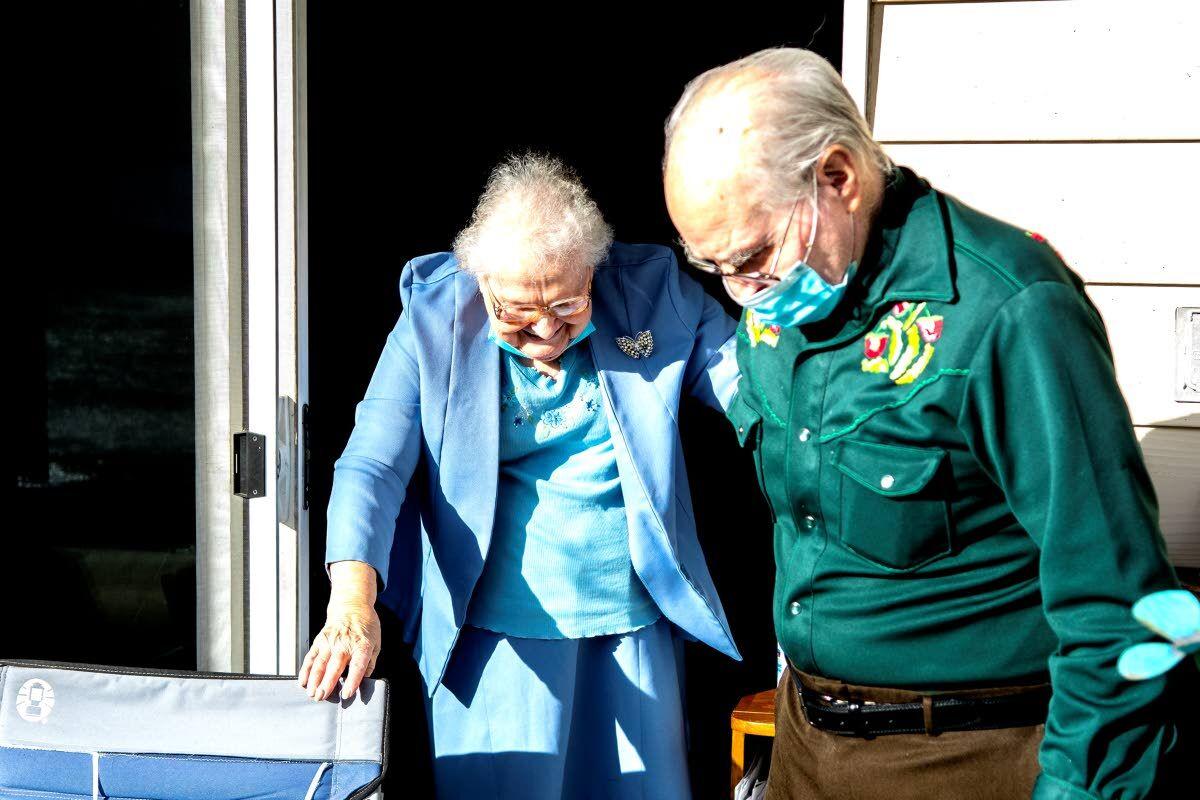 Jesse Main helps his wife of 75 years, Ethel Main, to a chair on their patio in Orofino last week. 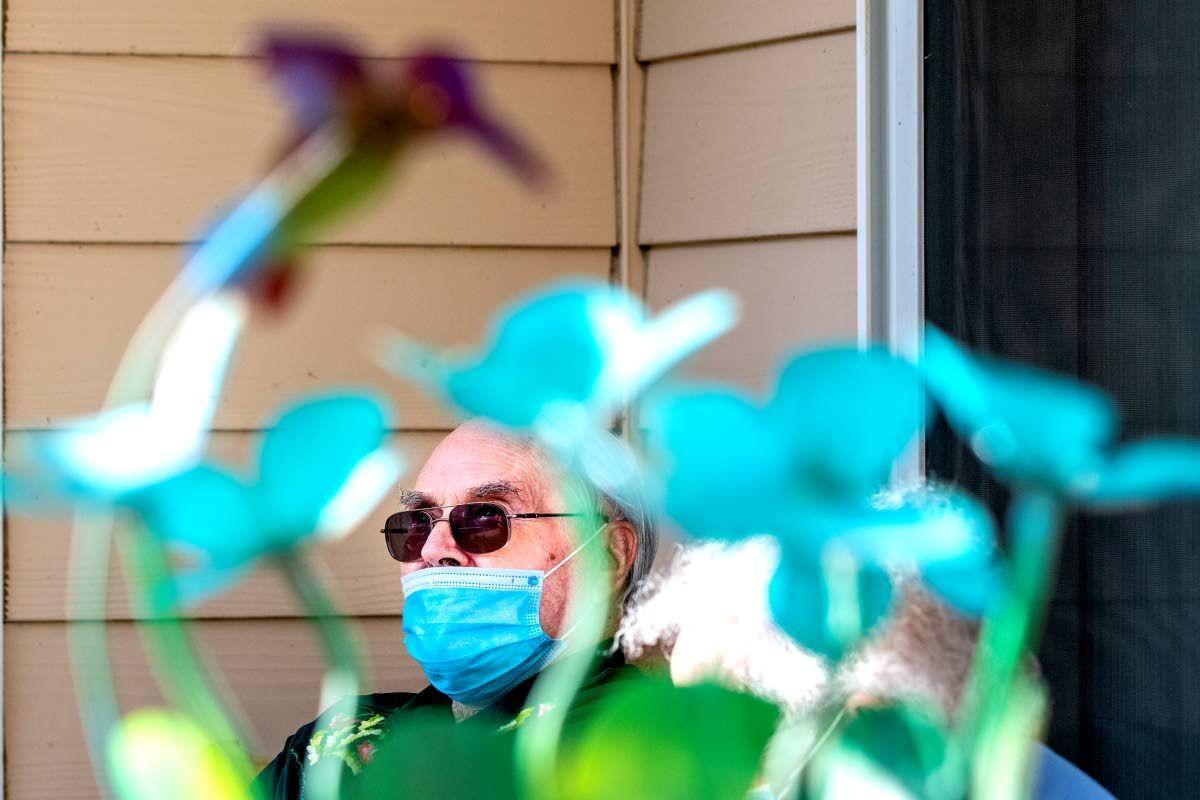 Jesse Main talks about his marriage to Ethel Main in Orofino last week.

Jesse Main, 96, and Ethel Main, 93, pose for a portrait outside their home at Brookside Landing in Orofino. The two will celebrate their 75th wedding anniversary today.

Ethel Main talks about her 75-year marriage to Jesse Main on their patio at Brookside Living in Orofino last week.

Jesse Main helps his wife of 75 years, Ethel Main, to a chair on their patio in Orofino last week.

Jesse Main talks about his marriage to Ethel Main in Orofino last week.

OROFINO — The first time Ethel Main laid eyes on her future husband, Jesse Main — she was 15; he was 18 — she was not impressed.

Living in Fruitland, Idaho, at the time, Ethel was friends with Jesse’s sister, who was eager for the two to meet.

“She met me in town and she says, ‘Ethel, you’ve got to meet my oldest brother who just got here,’ ” Ethel recalled recently. “Jess had been working in the hay fields and was expecting to go into the service.”

He arrived at their meeting in a car with a noisy crankshaft and wearing grubby clothes and a corduroy cap that he painted.

Later, when her brother-in-law asked what she’d thought of the new guy, “I told him, ‘You mean that one that came back from Nebraska?’ And I said: ‘I wouldn’t be seen walking across the street with him.’ ”

The next Sunday, however, when Jesse asked Ethel to go fishing with him, she accepted eagerly.

“If anybody would take me fishing, I’d go fishing with anybody,” Ethel explained. “Because I love to go fishing.”

Turns out they had a wonderful time together and discovered they had many things in common, including their love of fishing.

“And, anyhow, that’s when we started dating and started going together pretty regular.”

The rest is history. The couple, who now live at Brookside Landing in Orofino, will celebrate 75 years of marriage today. Jesse is 96 and Ethel is 93. It’s been a life of “ups and downs,” as Jesse said, but they’ve never doubted their love for each other.

Shortly after they began dating in 1943, Ethel invited Jesse to her home to meet her parents.

“My dad was very strict about that,” Ethel said. “He was downtown when Jess came in and he just started teasing mother just like he’d known her all his life. And after he left, I says to mother, I says, ‘What did you think of Jesse, Mama?’ and she says, ‘I think he’s a smart aleck.’ And I says, ‘Well, you might as well get used to it because I’m going to marry him.’ ”

Jess had reenlisted in the U.S. Army and was off to Germany shortly after he and Ethel got together. He saw combat overseas, but never was injured.

“He wrote to me all the time,” Ethel said.

In December 1945, Jesse took a short furlough from his base in Southern California to return to Idaho so he and Ethel could get hitched.

Ethel didn’t want a big wedding so they went to the Payette County Courthouse where they were married before a justice of the peace. Jesse’s parents were the witnesses.

On the way home after the ceremony, a car swerved in front of them. Some men got out, grabbed Jesse from the car and took off.

Ethel’s and Jesse’s folks followed to the Main Street of Fruitland, where Ethel suddenly found herself in the hands of friends who dressed her as a big baby and placed her in a wheelbarrow. Just about then, Jesse showed up, grabbed the wheelbarrow and started pushing his new bride down Main Street. Folks lined the sidewalks to cheer and congratulate the newlyweds.

After the chivaree, the Mains went on a short honeymoon and then Jesse returned to his base in Southern California. Ethel followed for a few months, and after Jesse’s discharge, they moved back to Idaho for good.

Through the years they lived in Fruitland, McCall and Post Falls, where Jesse worked as a planer for Boise Cascade mills and Ethel took odd jobs at restaurants or as a postal clerk. They also raised five children, and spent their vacations fishing and camping with their family.

In the meantime, they both converted to the Jehovah’s Witness faith. That has remained a strong bond between them.

“He worked steady; we never got on welfare and we never had food stamps,” Ethel said. “We managed with what we had. I canned, we fished and mainly our meat source was elk and deer.”

In 1993, the couple moved to Orofino to be closer to their son. Currently they live at Brookside Landing, an assisted living facility where they say they have plenty of friends and are well taken care of.

The COVID-19 pandemic has created its own problems, including being confined to their rooms and unable to celebrate their anniversary with their family.

But the Mains say they are grateful for the years they’ve had and the lasting quality of their marriage. Jesse reads the Bible to her every morning. And because they’re together, they never get lonely.

“If you get married with the idea that it’s forever, that’s what the Bible tells us — there’s only one husband and one wife and they become one,” Ethel said.

“It’s just a lot of ups and down — you got to give as well as take,” Jesse added. “Don’t wind up in any bars or anything like that. Stay forever.”