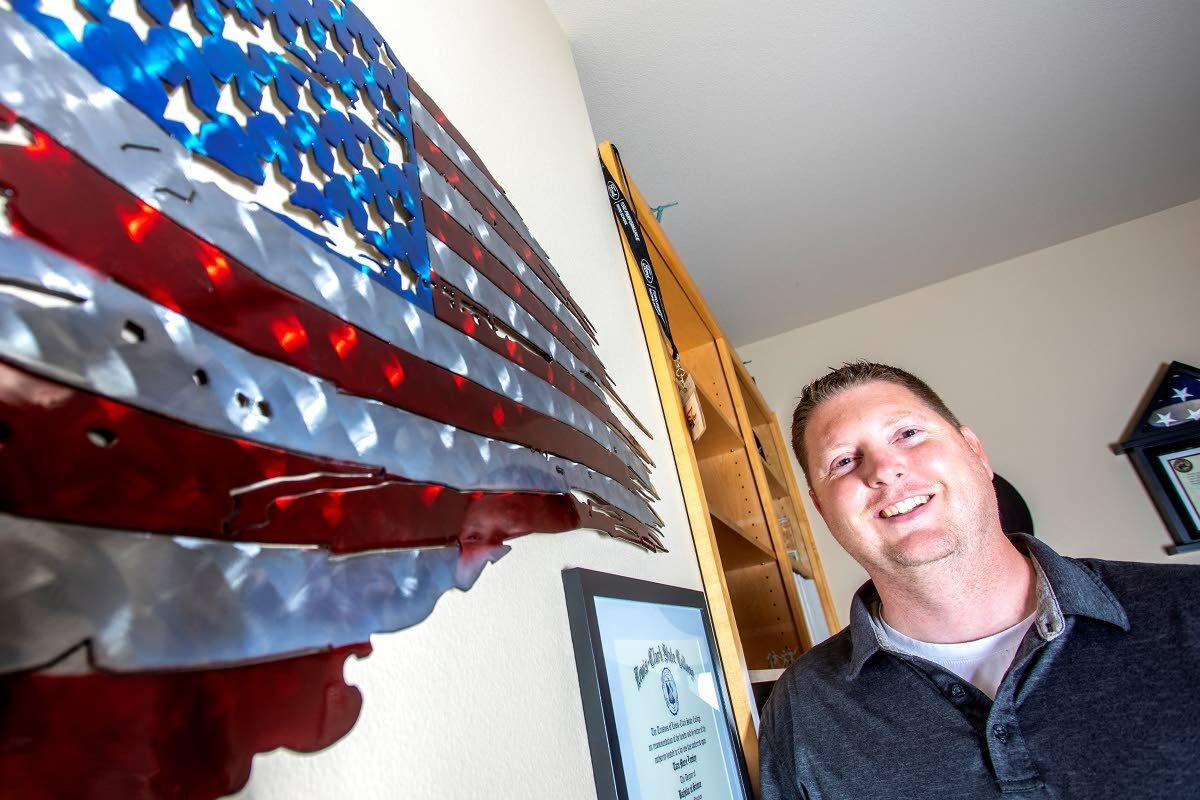 Eric Lumley stands for a photo in his home in Lewiston. Lumley served in both Iraq and Afghanistan. 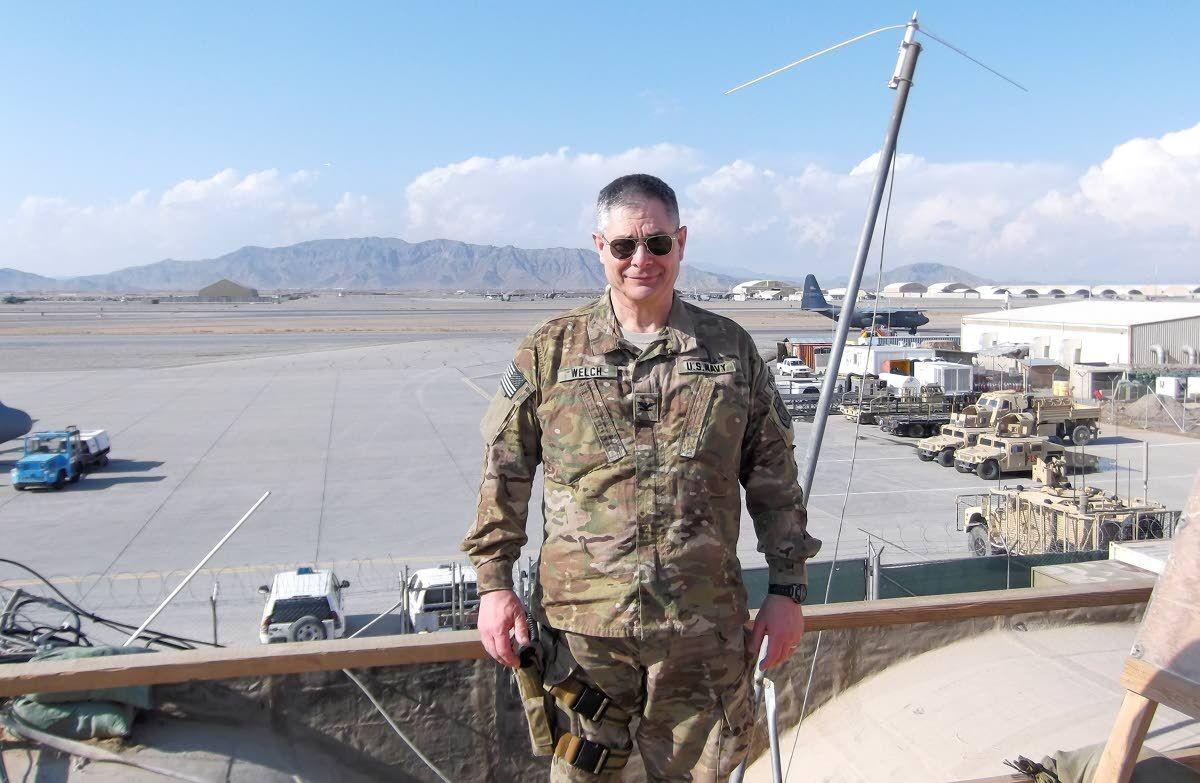 Doug Welch is seen in a photo from Afghanistan. 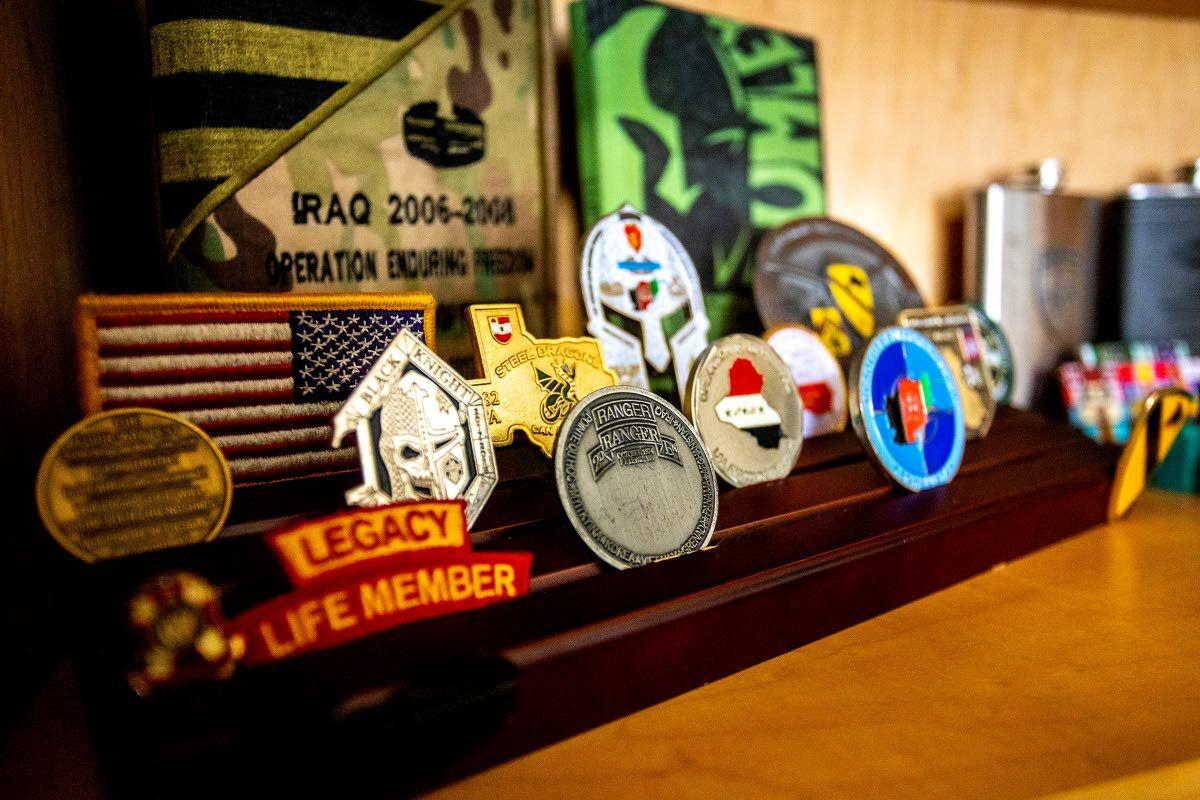 Various keepsake pins Eric Lumley earned during his time in the military sit out on a shelf in his home. 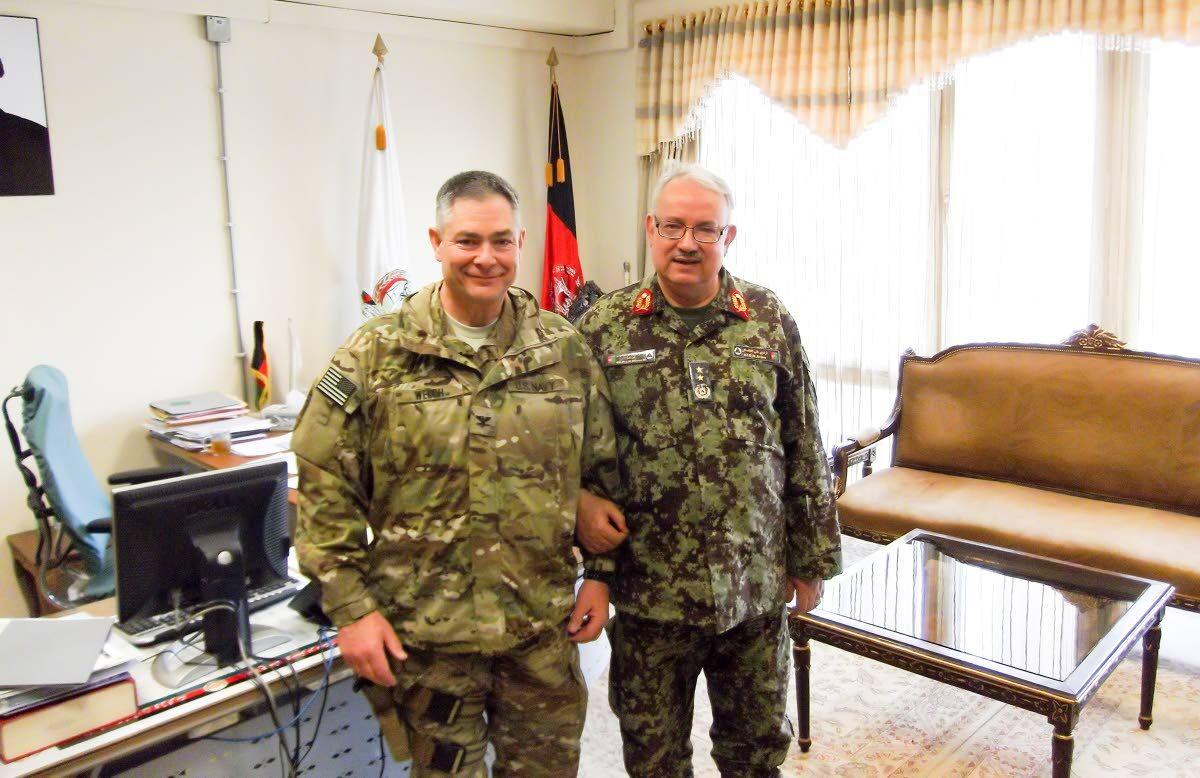 Doug Welch is seen in a photo at a military hospital in Kabul, Afghanistan. 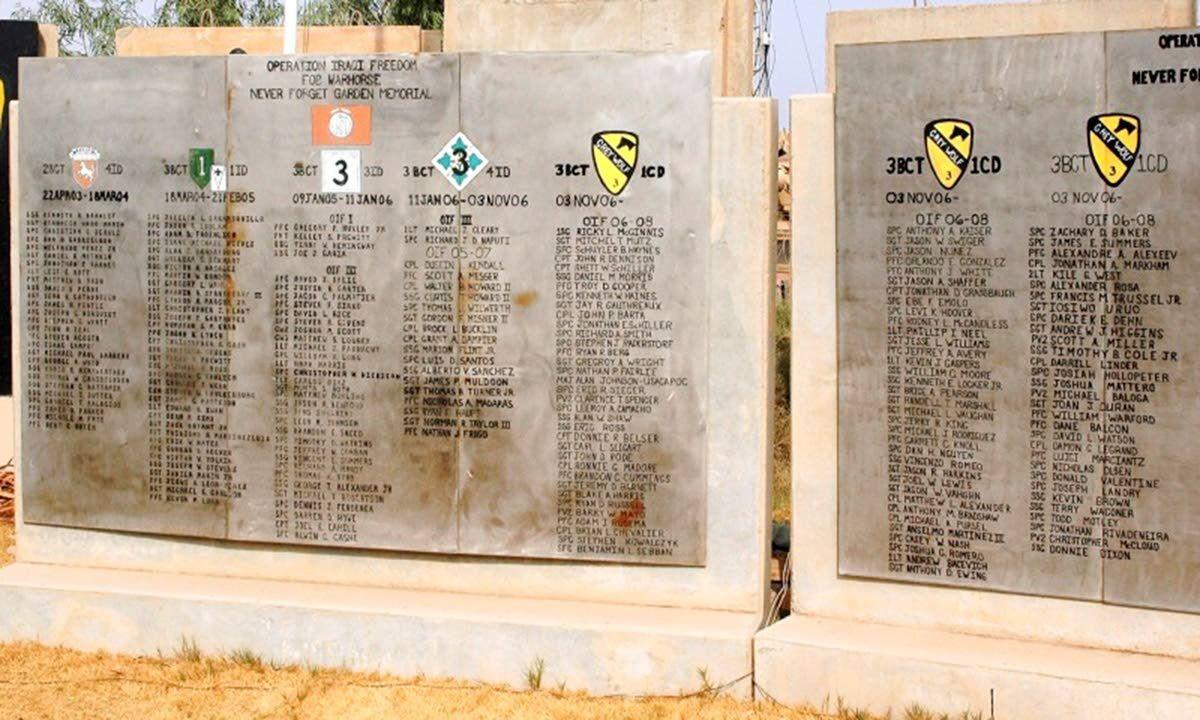 A memorial displays numerous names of soldiers lost during Operation Iraqi Freedom. Eric Lumley was part of a combat recovery team that recovered many of the soldiers. 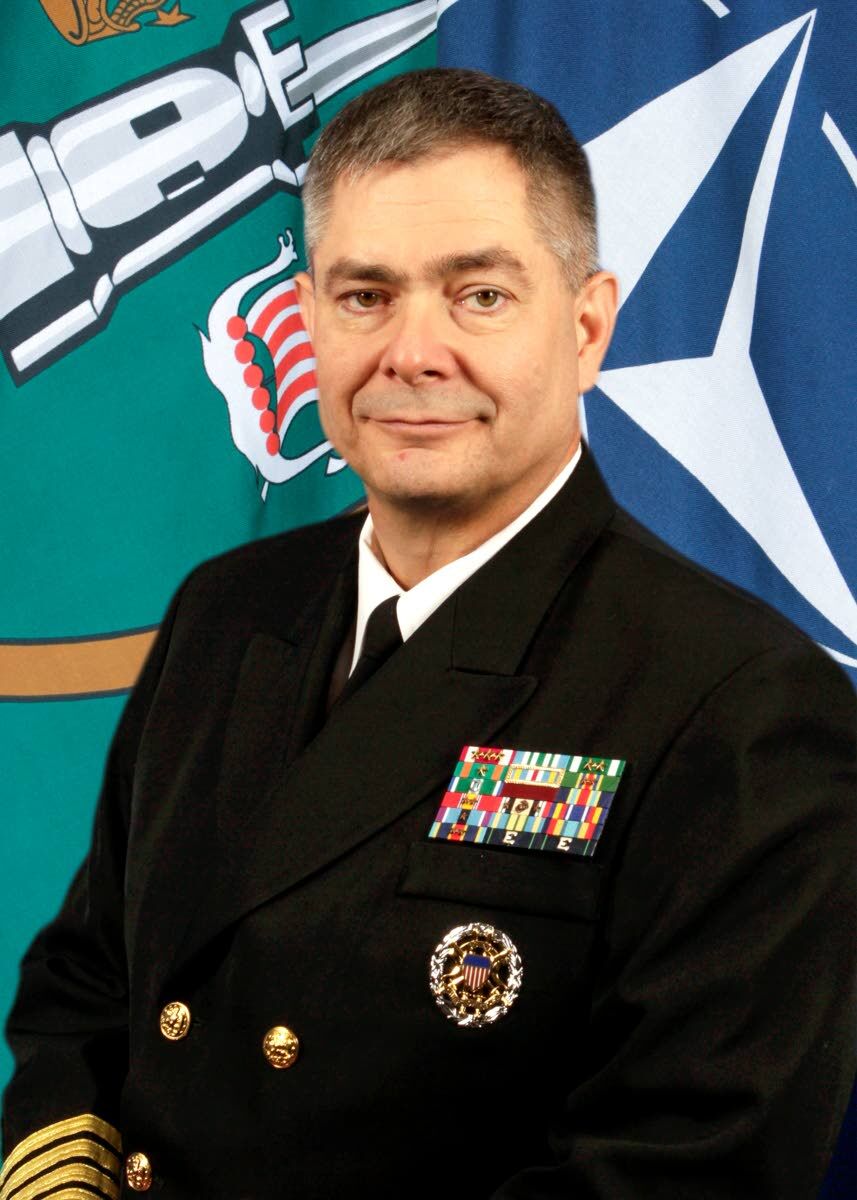 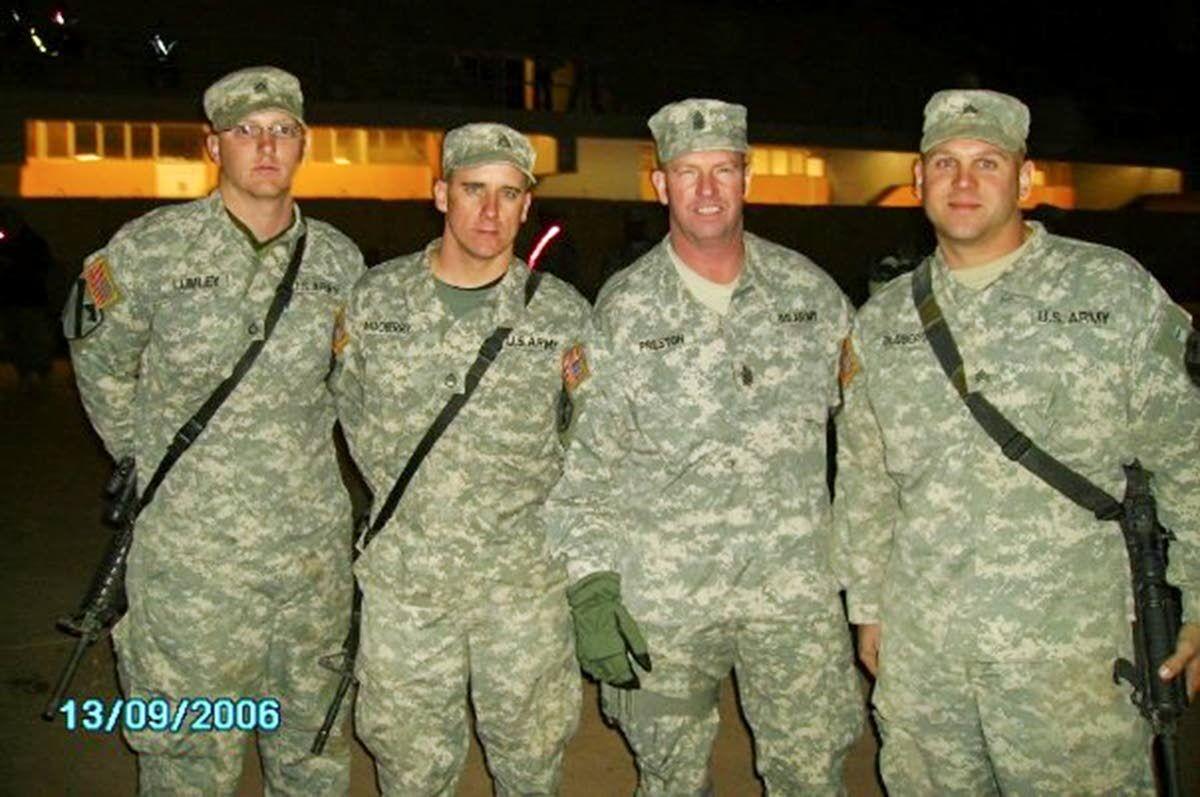 Eric Lumley is seen at left in a group photo in Iraq. 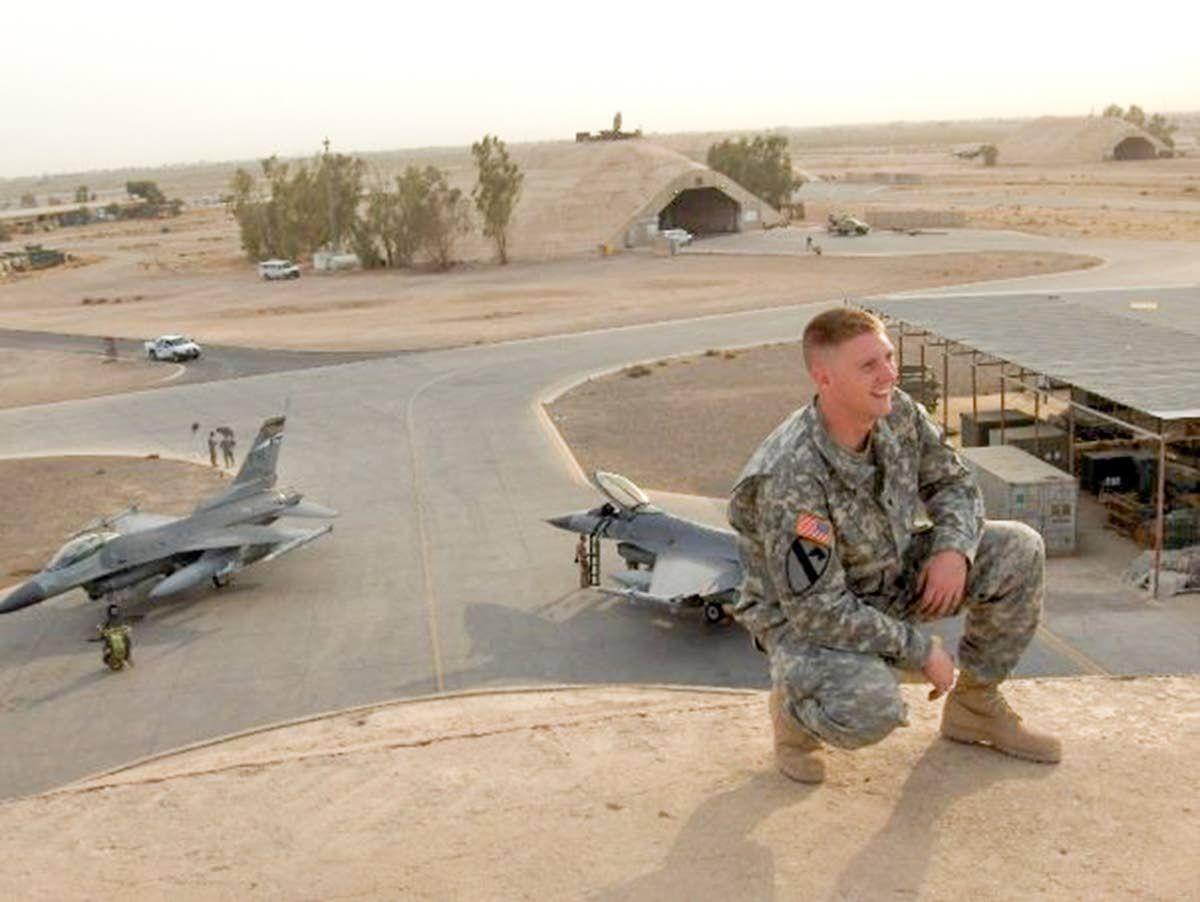 Eric Lumley is pictured overlooking an airfield in Iraq during his time in the military.

Eric Lumley stands for a photo in his home in Lewiston. Lumley served in both Iraq and Afghanistan.

Doug Welch is seen in a photo from Afghanistan.

Various keepsake pins Eric Lumley earned during his time in the military sit out on a shelf in his home.

Doug Welch is seen in a photo at a military hospital in Kabul, Afghanistan.

A memorial displays numerous names of soldiers lost during Operation Iraqi Freedom. Eric Lumley was part of a combat recovery team that recovered many of the soldiers.

Eric Lumley is seen at left in a group photo in Iraq.

Eric Lumley is pictured overlooking an airfield in Iraq during his time in the military.

President Joe Biden addressed the nation Aug. 31 after U.S. involvement in the region came to an end. He urged the American people to never forget the sacrifices made on foreign soil.

“I don’t think enough people understand how much we’ve asked of the 1 percent of this country who put that uniform on,” Biden said. “They will carry the cost of war with them their whole lives.”

The Taliban’s return to power in Afghanistan felt personal for many veterans and aid workers who served in the war and helped the country rebuild.

Eric Lumley, an Iraq and Afghanistan veteran living in Lewiston, is still processing the tumultuous end to a conflict he risked his life for.

“Everything that’s going on in Afghanistan — it’s a tough deal,” he said. “It feels like the sacrifices we made, the time and everything else we spent over there has been wasted.”

Lumley joined the U.S. Army in 2005 and deployed to Iraq from 2006-08 as part of a field artillery unit. When something, or someone, was under attack, his team would respond quickly with assistance. He also participated in humanitarian missions like building schools and bringing supplies to local villages.

At the time, Lumley said, there was a big push to recruit new soldiers for the war. During the time away from his family, he missed birthdays and other milestones.

“Our battalion at the time was losing a lot of people,” he said. “The feeling on that first deployment was that, at any moment, it could be the end for you.”

Just weeks after al-Qaida attacked the World Trade Center and Pentagon on Sept. 11, 2001, President George W. Bush announced the U.S. would bring leaders of the terrorist group to justice. Al-Qaida had planned the attacks from bases inside Afghanistan, which was governed primarily by the Taliban at the time.

Once inside the country, it didn’t take long for American troops to topple the Taliban government and disperse its fighters. From there, the U.S. “War on Terrorism” morphed into an effort to rebuild the region and establish a Western-style democracy with new schools, hospitals and public facilities.

When Lumley deployed to Afghanistan in 2018, the mission involved expanding military bases and helping train members of the country’s army. His tour was extended to 15 months.

“Up until that point, it seemed like everything we tried to do kept failing,” he said. “There’s a reason we were in Afghanistan for so long. It never felt like the Afghan army would actually fight for their country.”

Ahead of the planned withdrawal in August, the Taliban’s military captured significant territory, forcing widespread surrenders by Afghan forces.

In many cases, Lumley noted, their troops seemed to give up without a fight.

At the same time, civilian and military casualties in the country reached a record high this year, according to a report from the United Nations. While nearly 2,500 American service members died in Afghanistan, almost 48,000 Afghan civilians and 66,000 Afghan military and police members were killed amidst the decades-long strife.

Doug Welch, a retired captain and medic in the U.S. Navy Medical Services Corps, is intimately familiar with the ways blood can be shed during war. He served in Iraq from 2005 to 2006 as deputy surgeon for the second Marine Expeditionary Force.

During his time in Iraq, Welch worked with local medical professionals and any civilians who wanted to be trained. His team also took care of civilian and American military troops needing aid.

“The fighting was still pretty heavy when I got there,” he said. “There were times where Iraqi children would get hurt because of military weapons lying around. Sometimes they got sick, and with any kind of life-threatening emergency, we did what we could to help them.”

Before earning three degrees from Lewis-Clark State College in Lewiston, he spent five years in the Idaho National Guard in the 1980s. By the time citizen soldiers from Headquarters Company at Lewiston flew out to start their final training for the war in 2004, Welch was already on active duty.

From 2011 to 2014, he served as deputy medical adviser at NATO’s Allied Joint Force Command headquartered in the Netherlands. There he oversaw medical operations, including the teams sent in to train local Afghan physicians, nurses and technicians.

The Taliban would see anyone working with Americans as the enemy, Welch said, and treat them accordingly.

“I’ve had patients get dragged out of the hospital to be killed or even killed in the beds,” he said. “And medical people who got in the way would get killed or hurt.”

Welch never envisioned the war ending the way it did in August, as civilians swarmed the airfield in Kabul with desperation. He certainly didn’t predict Taliban forces would take over so quickly.

Even when planned in advance, he said non-combatant evacuation operations like the one carried out in Afghanistan can be very complex.

“Honestly, I am both disappointed and angry at the way things have been handled,” he said. “But at some point you just need to get out, and we needed to get out of Afghanistan.”

For him and many other medics, Welch said from his home in Lewiston, there’s “still a lot of emotion.”

The thought of any doctors, nurses or translators he worked with facing danger in the country keeps him up at night. Their fate, and the fate of so many other Afghan nationals, is again uncertain.

“Everybody has put in a lot of effort and time to make things better,” he said. “They were working in good faith.”

In the aftermath of the U.S. withdrawal, Lumley encourages people to reach out to individuals in the military and see how they’re doing. He’s currently a sergeant in the Army Reserve.

While he feels proud to serve his country, the level of sacrifice from his days in Afghanistan is still hard to explain.

“It’s easy to feel forgotten at times,” Lumley said. “For the soldiers who spent time over there, it’s going to be a tough bit.”