Anti-mask protesters wave signs and American flags outside the Lewiston City Library prior to a Lewiston City Council meeting on Monday evening. The group, which numbered approximately 100 people, was protesting against the City Council possibly reinstating a mask mandate. The mandate failed on a 3-2 vote. 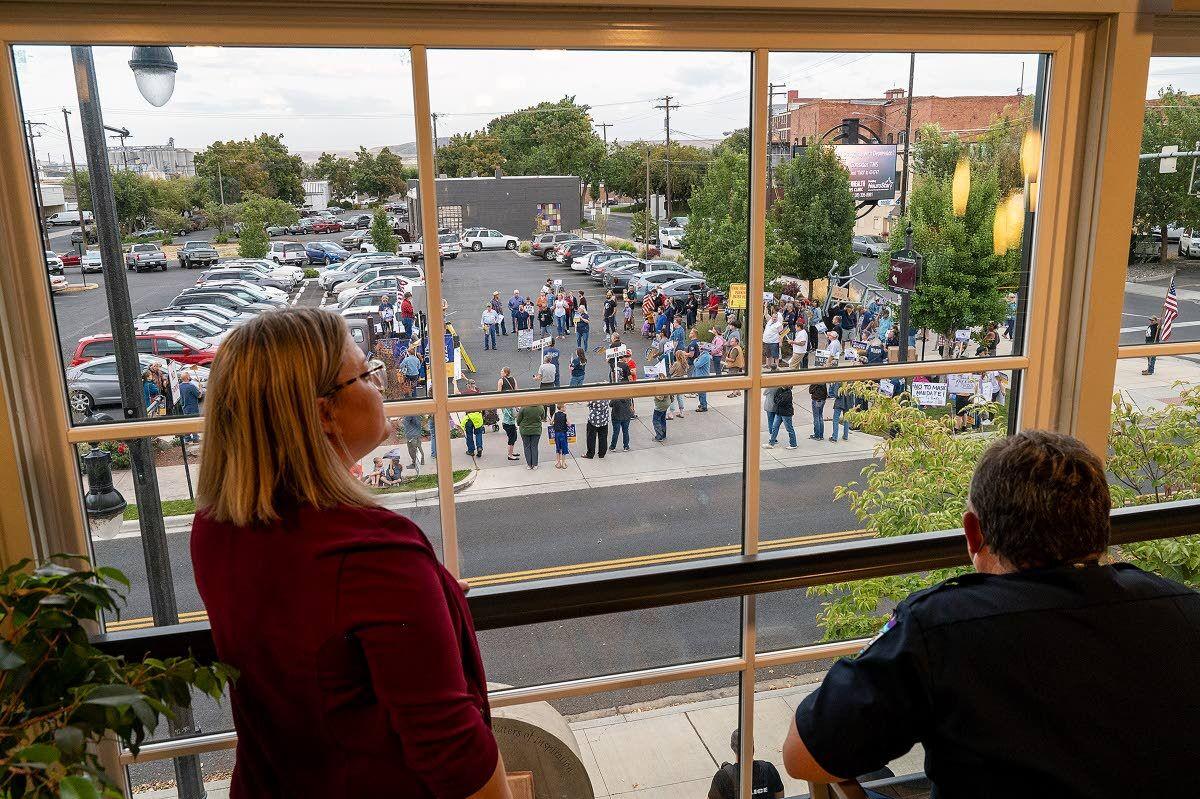 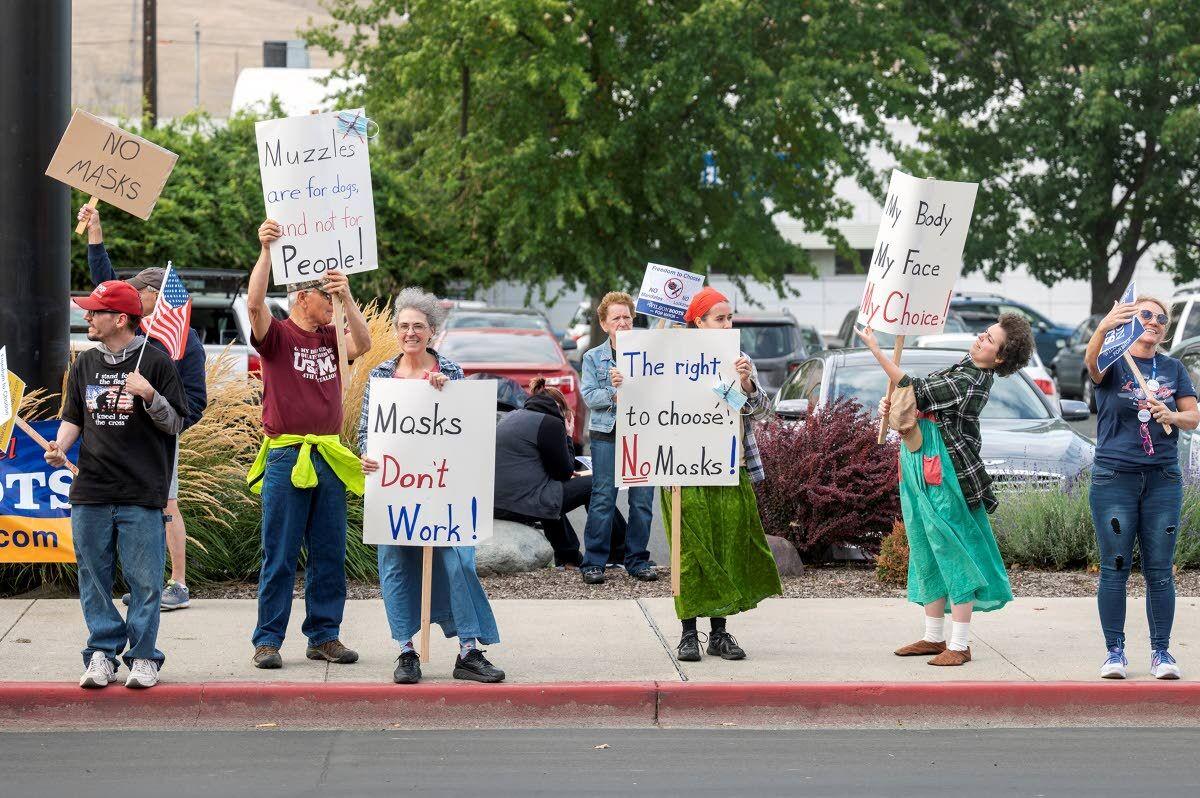 Protesters hold signs during a rally prior to the start of a Lewiston City Council meeting Monday evening.

Anti-mask protesters wave signs and American flags outside the Lewiston City Library prior to a Lewiston City Council meeting on Monday evening. The group, which numbered approximately 100 people, was protesting against the City Council possibly reinstating a mask mandate. The mandate failed on a 3-2 vote.

Protesters hold signs during a rally prior to the start of a Lewiston City Council meeting Monday evening.

The Lewiston City Council declined to reinstate a mask mandate at its meeting Monday night to help stem the drastic rise in COVID-19 infections, with Councilor John Bradbury’s motion failing 3-2.

The vote came after an hour and a half of public comment, which ran about 10-1 against bringing back the mandate the council imposed over last winter. Many of the commenters participated in an anti-mask protest outside the Lewiston City Library before the meeting began.

There was an extended period of confusion after the public comment period ended and the council took up the mask mandate. Bradbury made a motion to reinstate the mandate for six months, and Collins asked for a second. When none came, he declared the motion failed for lack of a second and members of the public began to leave.

But then Schroeder, who attended the meeting remotely via Zoom, said she couldn’t hear Bradbury’s motion and would have seconded it. This led to a lengthy discussion between councilors, City Attorney Jana Gomez and City Manager Alan Nygaard about how to proceed, with Gomez concluding that it would be acceptable for the council to revisit the agenda item that night.

But Bradbury and Pernsteiner said that wouldn’t be right because the majority of people who came to speak about the mandate left once they thought the matter was dead. Nygaard suggested that the council could vote to put the mask mandate on its next meeting agenda, but that failed when only Schroeder and Bradbury voted in favor.

That allowed the council to revisit the mask mandate, which Bradbury did in spite of his discomfort that he couldn’t respond in person to people opposed to the mandate who spoke earlier at the meeting. He didn’t hold back.

“To say they have a Constitutional right to not have a mask mandate is simply not right,” Bradbury said to those who claimed that the council has no authority under the U.S. Constitution to make decisions regarding public health. He cited a 1905 U.S. Supreme Court ruling supporting the authority of the government to impose vaccine mandates to protect the greater public health.

Bradbury then took issue with several commenters who told the council that it was playing God by forcing masks on city residents.

“Who’s playing God are the people who voluntarily and knowingly enter a room without a mask, knowing that a lethal virus might be transmitted to someone else,” he said. “We’re not playing God by saying we want to keep people healthy and alive.”

He also noted that when the council imposed a mandate last year, cases began to drop. Bradbury said he recognized that proving a connection would be difficult, but the evidence seemed to suggest that masks at least helped contain the spread. And he responded to the commenters who claimed that masks don’t stop the spread of viruses and bacteria that cause infections.

“Every day, millions of operations take place in this country’s hospitals,” he said. “Every doctor, every nurse, every anesthesiologist, every tech, they wear a mask. And why do they wear a mask? So the person being operated on won’t get an infection. It’s a barrier to the (respiratory) droplets carrying the infection.”

Councilors decided to revisit a mask mandate last week after hearing a dire update from local health officials about the high rate of infections and hospitalizations in the area, with the vast majority of cases striking unvaccinated individuals.

Lewiston mayoral candidate Wilson Boots seized the opportunity to stage a protest outside the library before the meeting that attracted more than 100 people and felt more like a campaign event. Boots has been a leader in the local anti-mask movement for more than a year, and protesters carried his campaign signs and others with messages like “No Mask or Jab Mandates.”