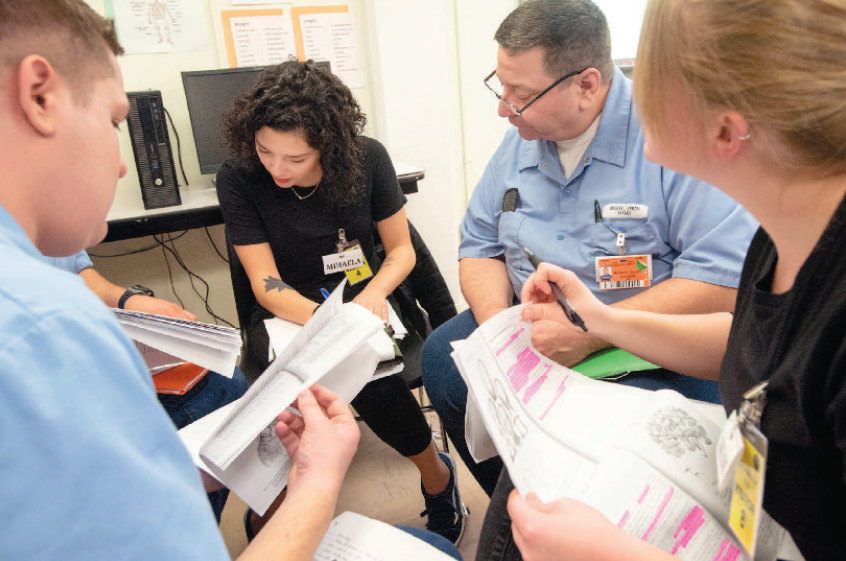 Mihaela (center) and LeRoy work in a small group last week to finish an assignment for a class they are taking through the University of Idaho at the Idaho Correctional Institution in Orofino. The class features several students from the Moscow campus and inmates from the prison who meet weekly for assignments, lectures and discussion.

Inmates Josh and Bob sit alongside University of Idaho students Mihaela, left, and Kortni as they listen to inmate LeRoy answer a question during class last week at the Idaho Correctional Institution in Orofino. 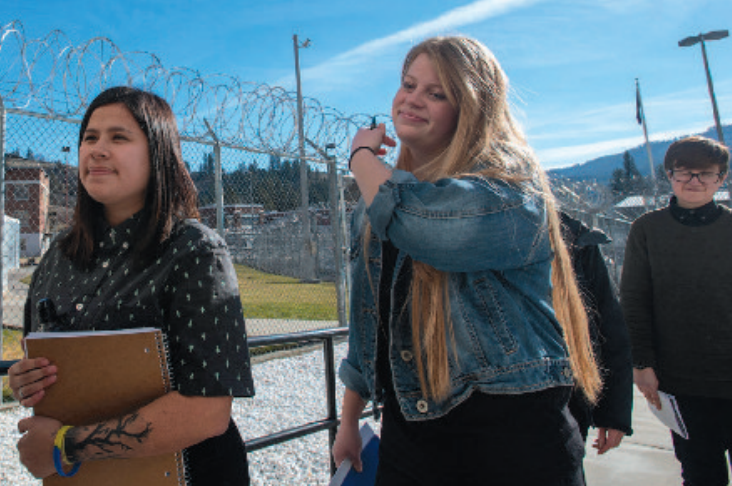 University of Idaho students in Biology and Crime course being taught at the Idaho Corrections Institution in Orofino enter the prison for class last week. 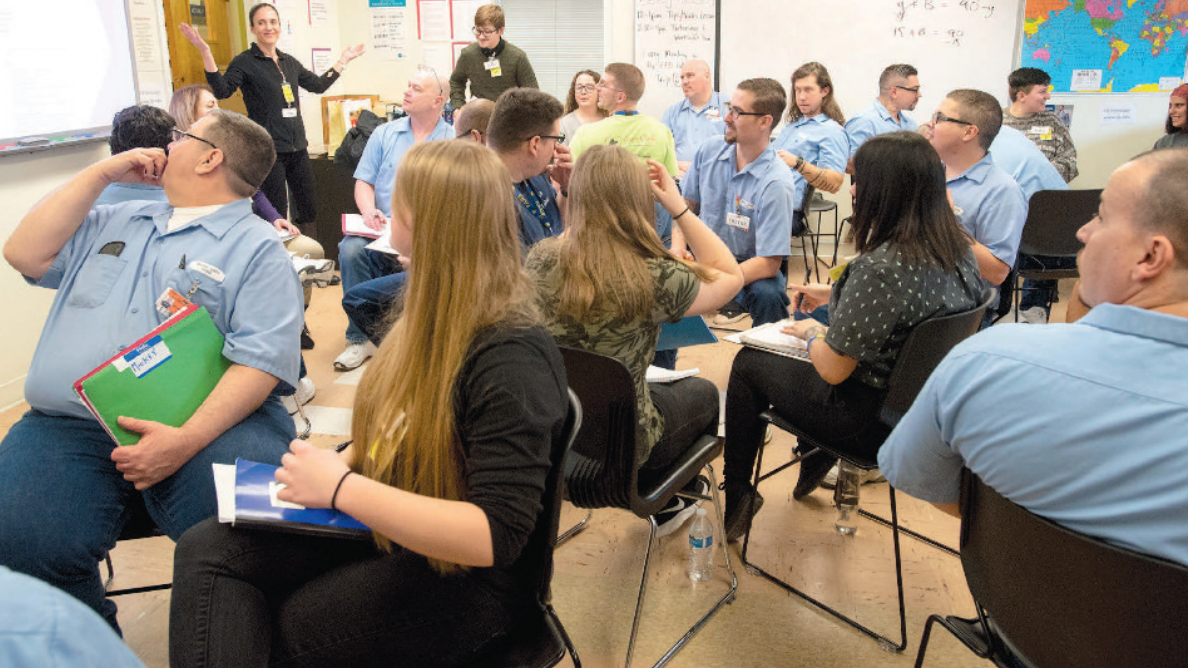 OROFINO — As a group of University of Idaho students make their way to class, they have to exchange their IDs for bright yellow visitor badges. They are escorted through a maze of hallways and several locked doors before they reach their destination: a classroom tucked away inside a prison.

For three hours every week, the students sit side-by-side with inmates at the Idaho Correctional Institution-Orofino as they pursue higher education goals through the Inside Out program.

It’s the first time the international program has been offered in the state of Idaho.

UI assistant professor Omi Hodwitz was instrumental to its launch. Hodwitz sees immense value in educational opportunities inside of prisons, in part because of her family background.

“My father served a sentence in prison when I was a lot younger, and from that early age I grew to really appreciate educational initiatives within an incarcerated setting, amongst incarcerated people,” Hodwitz said. “I know how valuable it can be.”

For the inmates, the program can build confidence and skill sets they can use once they’re released. Each prisoner must meet certain behavioral standards to participate. The class is free, but if the inmates want college credit for the course they have to pay about $1,200 in tuition. The inmates must have a high school diploma or GED certificate to be eligible.

As for the UI students, the majority of whose studies include an emphasis in criminology, it helps create an awareness and understanding of prison populations and the hurdles inmates face when trying to re-enter society.

‘All background baggage is left at the door’

The program requires some level of anonymity from both groups of students. Students aren’t allowed to interact outside of the classroom, so personal identifiers and last names are never shared.

The limited disclosure helps ensure everyone in the classroom has the primary role of student, according to Hodwitz.

Because of this Inside Out program policy, the students interviewed for this story are identified only by their first names.

‘We break down those barriers’

Both groups had preconceived stereotypes coming into the program, but their time together has allowed the students to see each other in a different light.

Kortni, a senior at UI, said some of her classmates have been surprised at what they’ve learned.

“Stereotypically, you think (the inmates) are not as intelligent because they’ve been locked up all this time, but they surprise you,” Kortni said. “They are super, super smart. Oftentimes smarter than us.”

The inmates’ contributions to discussions have changed her perceptions on a variety of topics.

“I think that I’ve learned things inside this classroom that could never be taught outside of a situation like this,” she said. “We break down those barriers where they see us as normal people and we see them as criminal people, but when we enter this classroom, we all become the same people. I feel like being allowed to relate on that level opens so many doors.”

LeRoy, an inmate, is taking part in the program for a second time since it launched last year. He, too, harbored stereotypes about the incoming students.

“When we first started last year, a lot of the students on the outside were very liberal minded,” LeRoy said. “I was brought up very conservatively, believe it or not, and I was like ‘you guys are crazy.’ But I’ve completely changed my way of thinking after that last class.”

The class has given him hope for what’s to come. He’s thinking about going to school again or changing his career after he serves his sentence.

“We are people that make mistakes, but a lot of us are trying to better ourselves,” Graydon said. “I think that’s something the outside students get to see is we are not just sitting here tattooing up, using drugs and things like that. We are trying to fix ourselves in whatever way possible so we can successfully return to the community.”

‘These people are going to be your next-door neighbors’

Deputy Warden Kent Shriver said the program, which is currently in its second semester, has been a success, thus far. The class has grown by six students this semester to 27 total.

“Most of our guys are going to be getting out, so having some skills in the different certifications or classes gives them a better chance to get a job when they get out,” Shriver said.

Crime is reduced and the state saves money if inmates are successful after their release, Shriver said.

According to a study by the nonprofit Rand Corp., every $1 investment in prison education programs saves between $4 to $5 down the line.

The Rand study shows inmates who participate in education programs were 43 percent less likely to return to prison within three years than those who did not partake in the programs.

It also leads to more employment opportunities once they are released.

“These people are going to be your next-door neighbors, and they are going to the grocery store with you, so to have them educated is important,” LeRoy said. “I’d rather have someone educated with goals in mind than someone who isn’t.”

Julie Oye-Johnson, the director of education for the nine prisons in Idaho, said about 50 percent of inmates have a high school diploma or GED certificate.

For many who participate in the Inside Out Program, it’s their first experience with higher education.

“To experience a success in education for the first time is eye opening, and I think it can be very shocking to them to think, ‘Hey, I’m not what I thought I was all this time. I can do it,’ ” Oye-Johnson said.

‘This is not a normal class’

Teaching assistant Steff King said the program has its challenges, since there is no way to directly communicate with the inmates outside of the classroom. They don’t have access to email, which makes on-the-fly changes to coursework difficult. Each activity has to fit regulations, which can be a unique challenge in itself, King said.

But the impacts of the class on the students are worth the minor struggles.

“It’s definitely very eye opening for both sides,” King said. “The (UI students) have been told what a prison is like and how the system works, but giving them this exposure firsthand is teaching them how to communicate with people they may work with later.”

UI student Mihaela said the atmosphere is “less heavy” than she originally expected. She considers it to be a normal class, just with a longer commute of about an hour and a half one way.

And Graydon said the course provides a little bit of normalcy while he serves his sentence. He has a bachelor’s degree in business, so he’s familiar with the higher education setting.

“What I enjoy is initially everyone was kind of scared on both sides, and then I could see, as they went through the class, there are friendships, there’s that camaraderie,” he said. “It didn’t even seem like it was in prison anymore. It seemed like a normal college class with conversations from everyone.”

“They are interested in the justice system in general, so getting to see the nitty-gritty and meeting the inmates, talking with them and going through a class, it’s a tremendous experience,” Manley said.