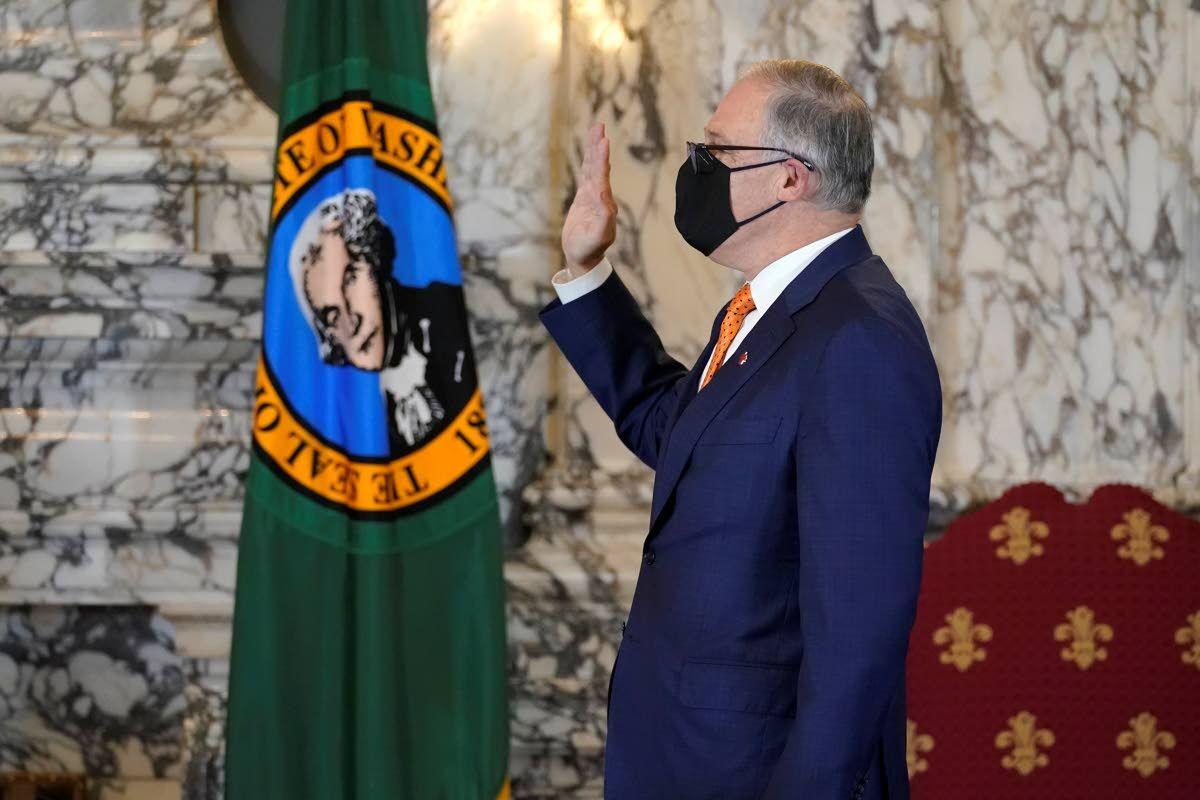 Washington Gov. Jay Inslee takes the oath of office for his third term as governor Wednesday during a ceremony at the Capitol in Olympia. 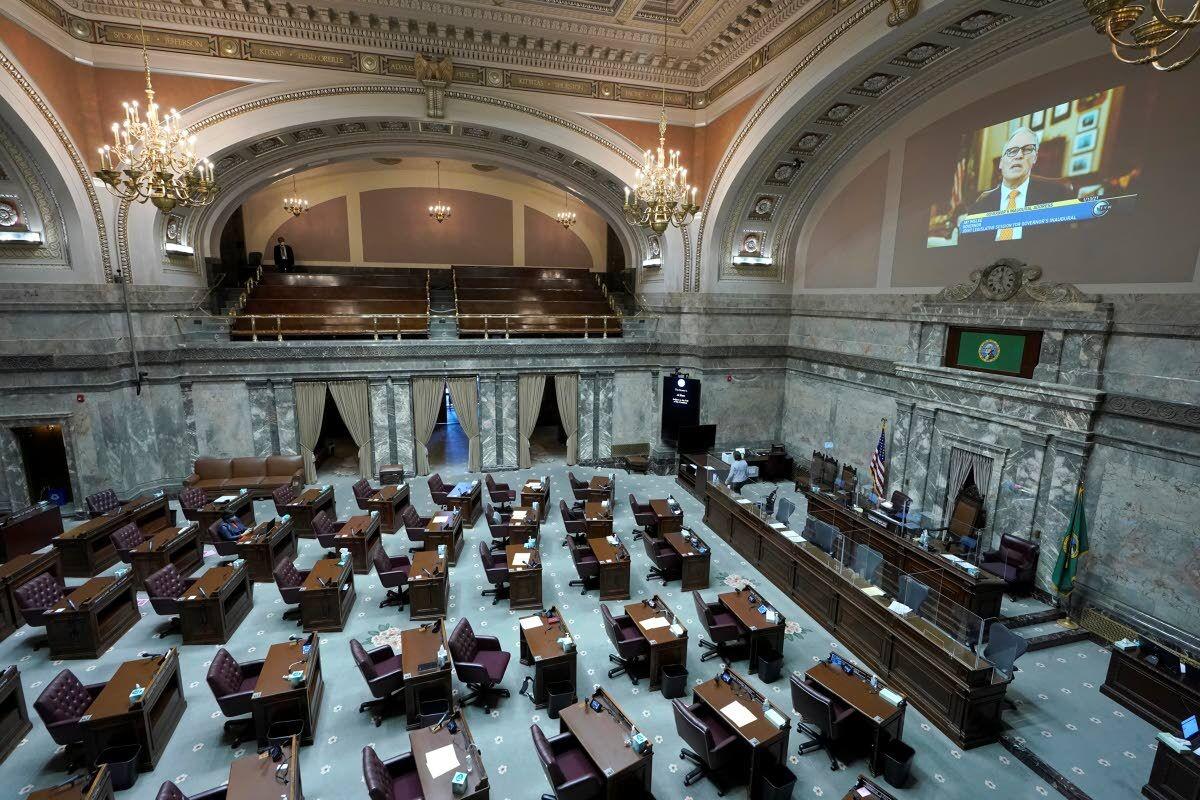 A pre-recorded video of Washington Gov. Jay Inslee giving his Inaugural Address is played in the Senate chambers, Wednesday, Jan. 13, 2021, at the Capitol in Olympia, Wash. (AP Photo/Ted S. Warren) 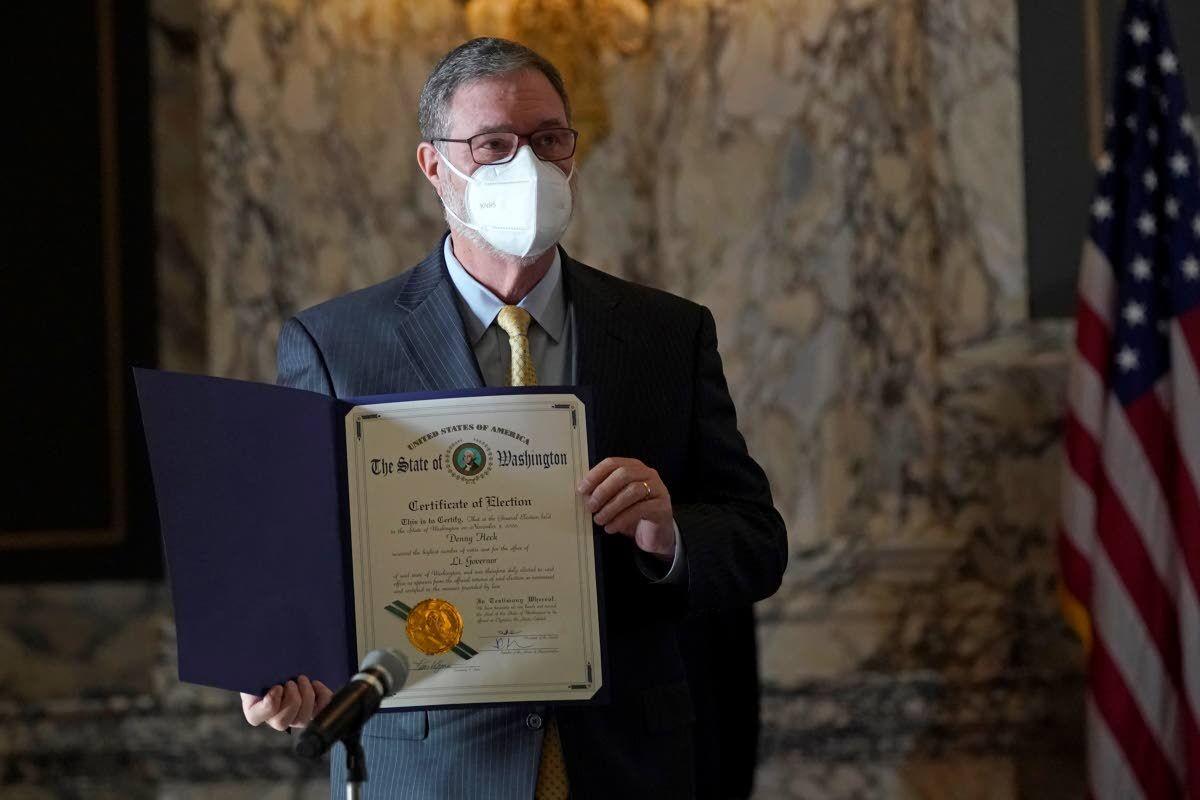 Washington Lt. Gov. Denny Heck holds his certificate of election after he took the oath of office, Wednesday, Jan. 13, 2021, during a ceremony at the Capitol in Olympia, Wash. (AP Photo/Ted S. Warren)

Washington Gov. Jay Inslee takes the oath of office for his third term as governor Wednesday during a ceremony at the Capitol in Olympia.

A pre-recorded video of Washington Gov. Jay Inslee giving his Inaugural Address is played in the Senate chambers, Wednesday, Jan. 13, 2021, at the Capitol in Olympia, Wash. (AP Photo/Ted S. Warren)

Washington Lt. Gov. Denny Heck holds his certificate of election after he took the oath of office, Wednesday, Jan. 13, 2021, during a ceremony at the Capitol in Olympia, Wash. (AP Photo/Ted S. Warren)

OLYMPIA — In a videotaped speech to a mostly remote meeting of the Washington Legislature, Gov. Jay Inslee on Wednesday told lawmakers that following the challenges of 2020, the state must move to a “new normal” that addresses a multitude of issues, including equity, affordable housing and climate change.

“We have big challenges that demand we take big steps,” he said in his third inaugural address, which was pre-recorded instead of being delivered live in the House chamber. “We are not going back to normal. We are going forward towards a new normal.”

Lawmakers convened their 105-day legislative session Monday under tight security and with strict COVID-19 protocols in place, with legislators spread out between the Senate and House chamber floors, public galleries, chamber wings and offices as they approved rules to run a remote session for the remaining weeks.

Inslee, whose video was played shortly after he was sworn in for his third term, pointed to the shared experience of the pandemic that has affected all corners of the state, including the way lawmakers do their work.

He did not mention a new capital gains tax and a tax on health insurers that he proposed last month as part of his two-year, $57.6 billion budget proposal. Lawmakers in the Democratic-controlled House and Senate will unveil their own budget plans in the coming weeks.

One of the issues Inslee highlighted in his speech was police reform, saying that the “police-citizen violence we saw in 2020 alone has traumatized the nation.” Several bills have already been introduced, including a bill that had a public hearing Tuesday and seeks to limit police tactics by banning chokeholds, prohibiting the use of unleashed police dogs during an arrest and not allowing the use of tear gas.

Inslee said the state will also be working “to incorporate an equity lens into health care, jobs, education, pollution, and more.”

Inslee lauded state residents who have followed safety protocols during the pandemic by wearing masks and physically distancing, and said he wants to help businesses that have been affected by the restrictions he’s imposed.

He said he is seeking to reduce increases in the unemployment tax on businesses and will continue to seek additional money from the federal government while working with the Legislature “to get more money into people’s pockets.”

Inslee also promised to get students back into classrooms “in a safe and healthy setting for everyone.”

“This is hard on young people, and no one knows that better than our parents and our educators,” he said. “No one today has a single answer, but we just have to provide the support these students need, whether it’s academics, mental health or nutrition.”

On housing, Inslee noted that tenants and small landlords are facing “unprecedented economic challenges” and said that the state must address affordable housing as home prices continue to rise.

Inslee also touched on the subject that has been the center of his agenda throughout his time in office, saying that the state “cannot let the short-term crisis of COVID-19 blind us to the long-term health cataclysm that is climate change.”

“Both the virus and climate change have fatal results,” he said. “Both can be solved through science and our own ingenuity. We can and we will pursue solutions to both at the same time.”

As part of his budget proposal last month, Inslee pushed for several climate related proposals, including fully reinstating a plan to cap carbon pollution in the state and a measure that would require fuel producers and importers to reduce greenhouse gas emissions associated with gasoline and other transportation fuels.

In a televised Republican response, Rep. Drew Stokesbary said Inslee’s refusal to call the Legislature into special session last year was a “Lone Ranger response” that made the fight against the pandemic more difficult.

“For the past 10 months, he has ruled by executive order,” Stokesbary said. “We’re not meant to be governed this way, even in times of great peril. We elect a citizen Legislature, not a king.”

Stokesbary called for the state to improve its vaccine delivery rate and to “extend a lifeline to families and businesses who are struggling to survive.”

He said lawmakers should use $200 million from the state’s so-called “rainy day” fund to issue one-time recovery rebate to families, and offer additional rental assistance to tenants who can’t work due to shutdowns, as well as $300 grants per student of low-income families to help with the financial burdens of remote learning.

The governor’s speech was played on the walls of the both the House and the Senate, though almost all members were watching remotely. In the House chamber, only Speaker Laurie Jinkins was present at the rostrum, along with newly sworn in Lt. Gov. Denny Heck, who also serves as president of the Senate.

Capitol campus buildings are closed to the public because of the coronavirus pandemic. The House will do its floor votes mostly remotely, with just a few leaders and staff on the floor, while the in the Senate, regular floor votes will be conducted in a hybrid format, with a mix of senators present in the chamber and others participating remotely.

All committee hearings in both chambers are being held remotely, with public participation. As it was before the pandemic, hearings and floor votes will continue to be broadcast or live streamed by TVW, the state’s government affairs channel, as was the governor’s speech. The planned videotaped Republican response was broadcast by TVW as well.

Inslee on Tuesday night said the Washington National Guard would continue to support security efforts at the Capitol at least through Inauguration Day “due to evolving intelligence on security threats” posed in all 50 state Capitols. Inslee activated as many as 750 guard members last week following the siege at the U.S. Capitol and a breach of the property around the governor’s mansion by a group of supporters of President Donald Trump.