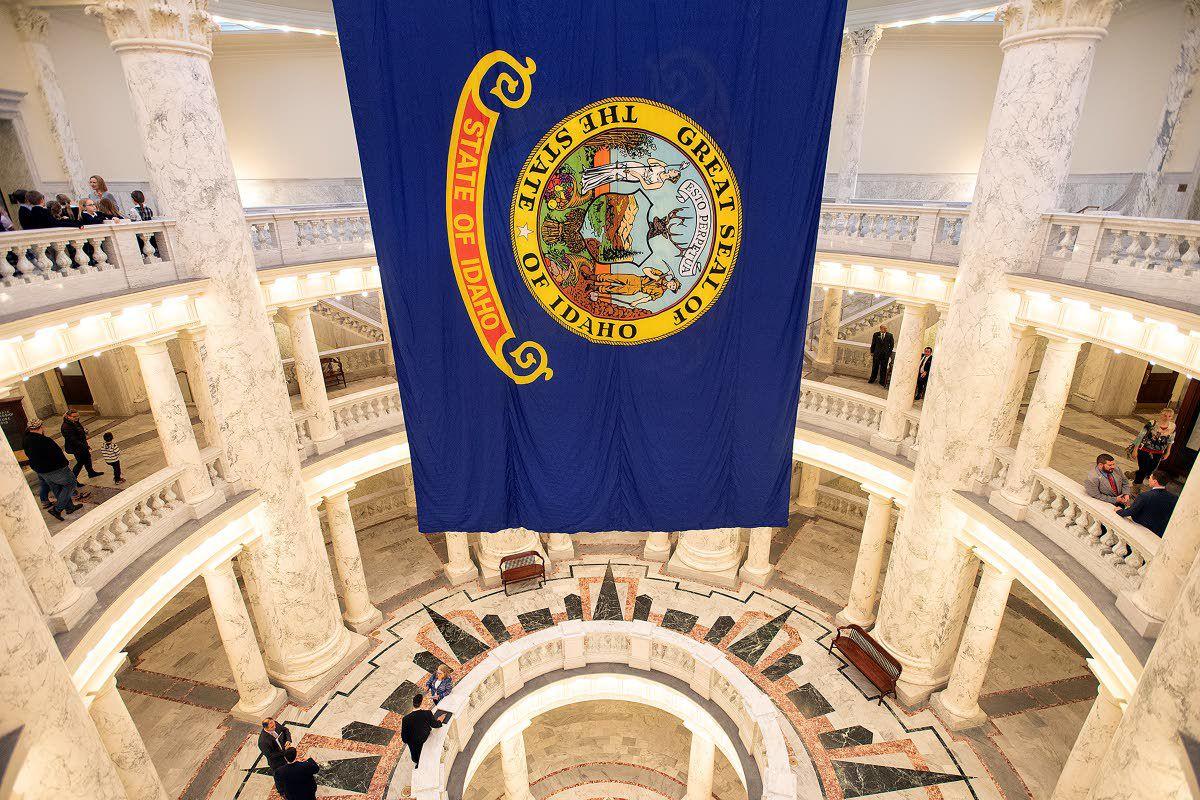 The Idaho state flag will be on display inside the Idaho State Capitol Building in Boise when lawmakers get together on Monday, as it was when this photo was taken the past February. Many of the key issues that didn’t get resolved during the 2019 legislative session also will be on display again this year. 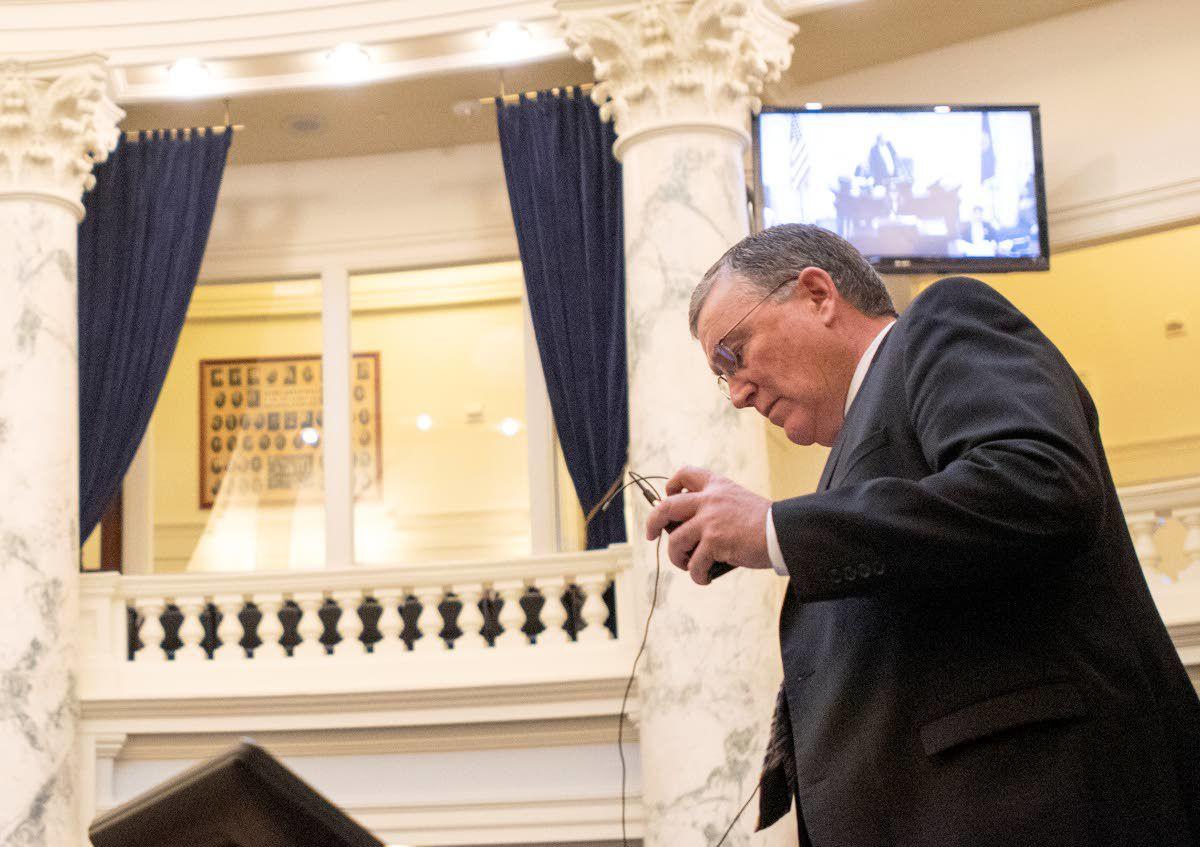 House Speaker Scott Bedke, R-Oakley, believes property tax relief will be one of the top issues for the 2020 Idaho legislative session, which gets underway Monday. 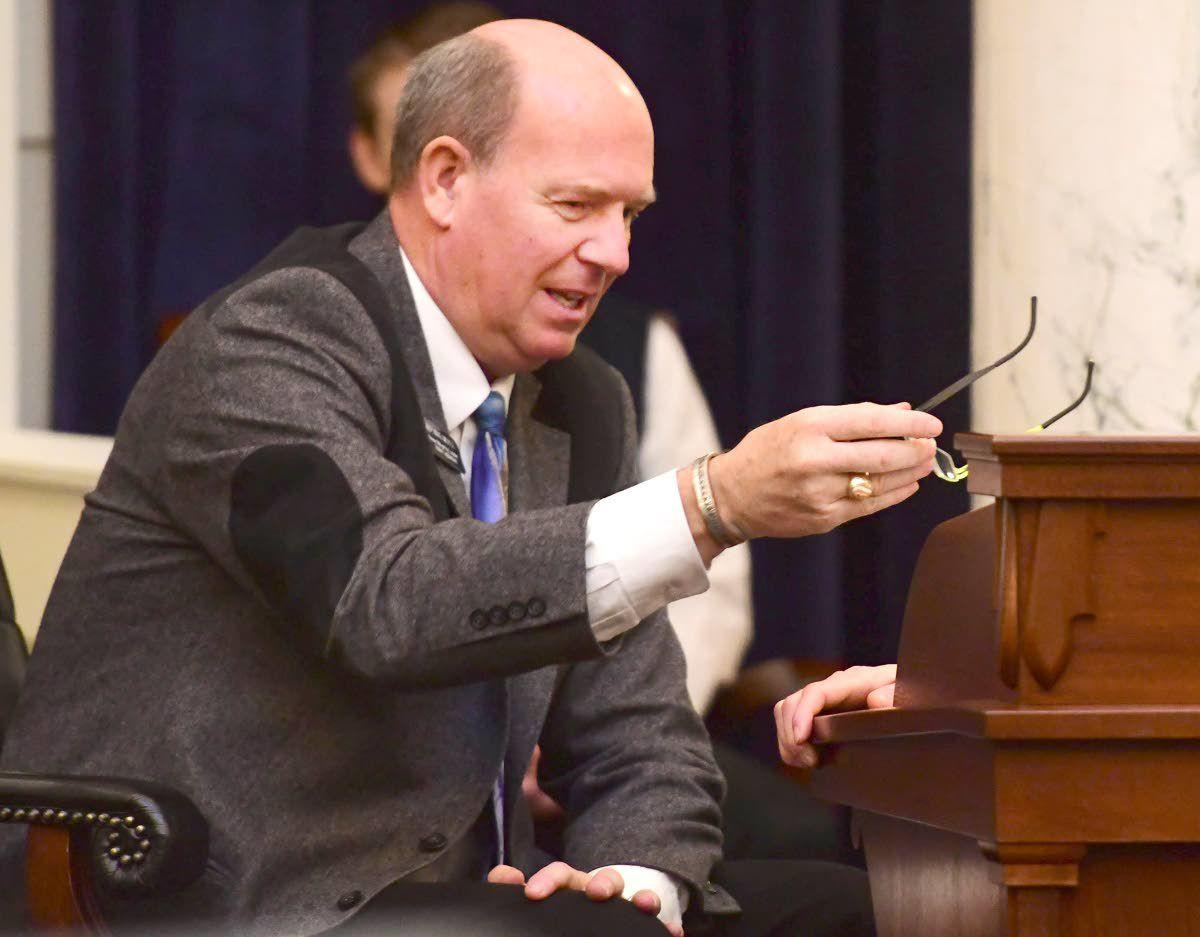 House Majority Leader Mike Moyle, R-Star, notes that “you never know what the big issue is going to be” before the legislative session is underway. 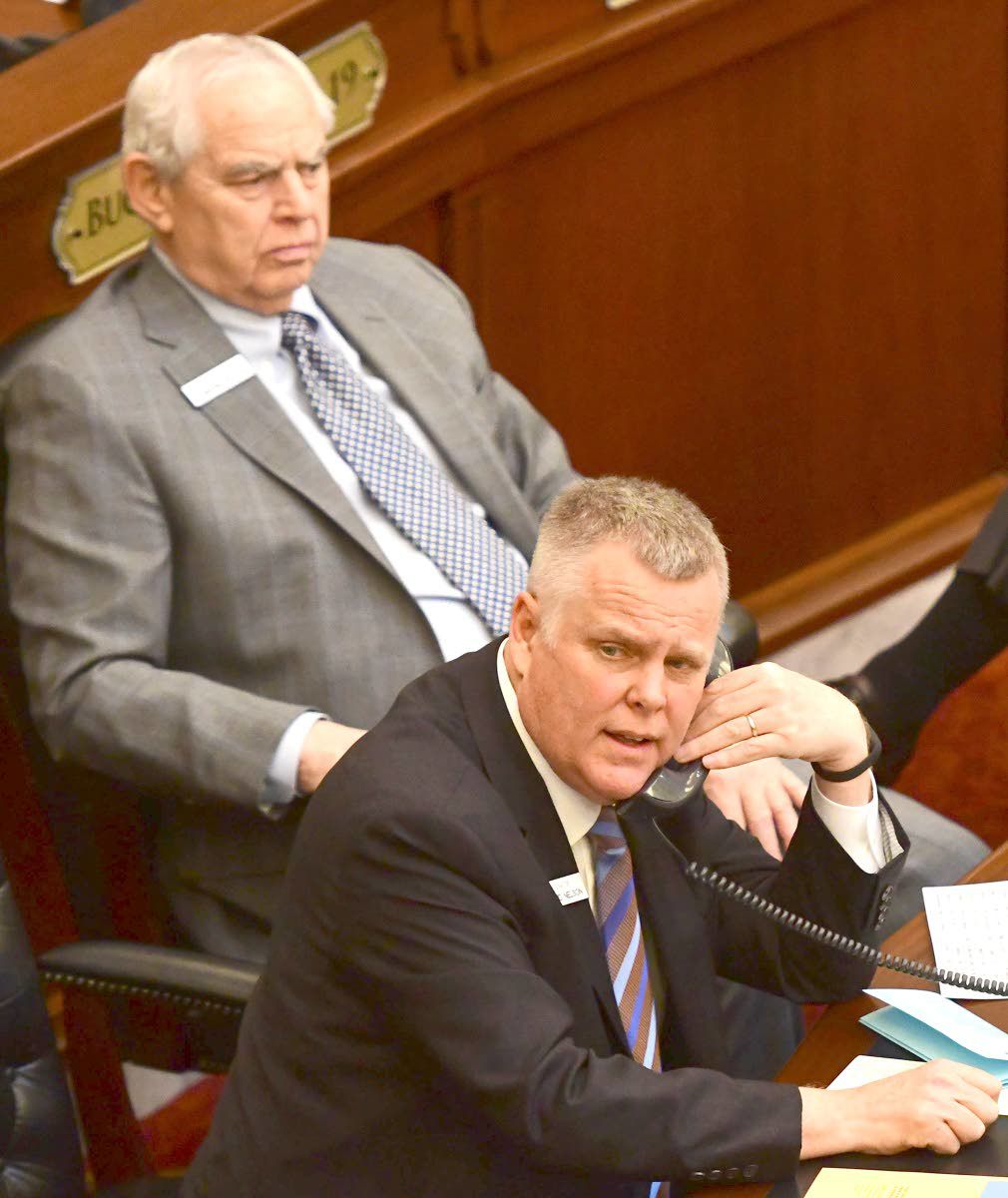 Sen. David Nelson, D-Moscow, who sits on the Senate Transportation Committee, looks to push this session for continuation of the “surplus eliminator” funding mechanism, which directs a portion of any year-end general fund surplus to the Idaho Transportation Department.

The Idaho state flag will be on display inside the Idaho State Capitol Building in Boise when lawmakers get together on Monday, as it was when this photo was taken the past February. Many of the key issues that didn’t get resolved during the 2019 legislative session also will be on display again this year.

House Speaker Scott Bedke, R-Oakley, believes property tax relief will be one of the top issues for the 2020 Idaho legislative session, which gets underway Monday.

House Majority Leader Mike Moyle, R-Star, notes that “you never know what the big issue is going to be” before the legislative session is underway.

Sen. David Nelson, D-Moscow, who sits on the Senate Transportation Committee, looks to push this session for continuation of the “surplus eliminator” funding mechanism, which directs a portion of any year-end general fund surplus to the Idaho Transportation Department.

BOISE — As lawmakers gather for the start of Idaho’s 2020 legislative session on Monday, “ditto” may be the operative word for the coming months.

That’s because, more than any other session in recent memory, many of the issues likely to be debated this year are carryovers of discussions that began in 2019.

All of which means the 2020 session could be even more contentious and stressful than last year’s 95-day slugfest, which ended in acrimony as the House and Senate rejected bills the other chamber wanted.

(In 2018, 34 of the final 40 bills introduced in the House and Senate were signed into law. Last year, by comparison, nearly two-thirds were killed in the waning days of the session. The casualties included a $7.8 million House leadership plan to construct permanent office space for all House members — a proposal the Senate gleefully slapped down, twice.)

So buckle up and get ready for a bumpy ride. Here are some of the issues that might prove bruising during the 2020 session:

The final act of the 2019 session came when the House spiked a traditional year-end measure extending executive branch administrative rules for another year. As a result, more than 8,000 pages of regulatory code expired July 1.

In order to protect public health, safety and welfare, state agencies had to re-adopt many of them as temporary rules.

One of the first things lawmakers will do this session is examine those pending regulations and decide if any should be rejected. However, the tensions that doomed the administrative rules bill last year haven’t been resolved.

“We don’t have closure yet on whether both sides need to agree, or on how much power committee chairmen should have to not hear rules,” said House Speaker Scott Bedke, R-Oakley.

Under current procedures, most temporary rules can only be blocked from taking effect if the House and Senate both reject it. A House committee, for example, could oppose a new school immunization rule, but it will still take effect if the Senate committee accepts it or doesn’t review it.

House Republicans find this particularly aggravating, given that they’ve blocked a number of regulatory proposals in recent years, only to see them fly through the Senate with nary a hiccup.

House Majority Leader Mike Moyle, R-Star, introduced legislation last year to change the rules review process. He wants pending rules to be approved by both the House and Senate. Previous governors have opposed similar plans, though, as it essentially gives a single legislative chamber veto power over executive branch regulations.

What to watch for: After discussing this issue for much of the summer, Bedke and Senate President Pro Tem Brent Hill, R-Rexburg, say they think they have “a good compromise that everyone can get behind.” They provided no details, but plan to roll out the proposal in the next few days.

If their plan doesn’t meet with approval from legislators, though, it could undermine bicameral cooperation on other policy issues for much of the session.

“Can the House and Senate get together and make a decision on how to deal with rules? Until that’s locked down, we may see nothing but chaos,” said Rep. Bill Goesling, R-Moscow.

“I’ve heard that the House intends to hold things up from Day One, if they don’t get their way,” said Sen. David Nelson, D-Moscow.

Alternatively, the Legislature could settle for a repeat of 2019 and simply let administrative rules expire at the end of the fiscal year. That worked out remarkably well last summer, as it allowed the governor to eliminate or simplify 75 percent of the state’s administrative code.

“It might have been unintentional, but the process worked,” said Alex Adams, Gov. Brad Little’s budget director. “It led to one of the largest regulatory cuts in the nation.”

Efforts to impose various conditions and sideboards on the expanded Medicaid program prompted some of the loudest public outcry during the 2019 session.

The sign-up period for the program began Nov. 1, for coverage beginning Jan. 1. More than 50,000 people enrolled. However, the eligibility restrictions — which include a 20-hour-per-week work requirement for most able-bodied adults — still await federal approval.

Given these uncertainties, lawmakers could consider additional changes or restrictions on eligibility rules. They also need to decide how to pay for the program.

Officials estimate Idaho’s 10 percent matching share of the costs might exceed $40 million per year. An interim legislative committee suggested three-quarters of that could come from savings in the state catastrophic care program, as well as other health care services. It recommended that Idaho counties chip in another $10 million, with any remaining costs coming out of the state Millennium Fund tobacco settlement money.

What to watch for: With this being a hot-button issue and an election-year session, conservative Republicans may seek additional conditions, or possibly try to repeal the whole program.

“I’m sure the Legislature isn’t done tweaking Medicaid expansion,” said Rep. Caroline Troy, R-Genesee. “There is a desire to make sure it reflects Idaho values, to make sure that no one is gaming the system. I also remain concerned about the cost.”

The Idaho Association of Counties will try to limit the burden on counties, but there appears to be little legislative resistance to the idea that they should contribute a portion of the costs.

“Under the Constitution, they’re responsible for indigent (medical) care,” Troy said. “They certainly benefited from the Affordable Care Act. It seems unfair if they don’t continue to participate in funding Medicaid expansion.”

That represents a $100 million, 5.3 percent increase over the current budget. It includes $38 million for projected growth in school enrollment, as well as $40 million in salary increases for veteran teachers.

If approved, it would be the sixth consecutive year in which the Legislature boosted K-12 funding by at least $100 million.

Lawmakers will also continue their discussion of potential changes to the school funding formula.

This was a major point of contention last year, in part because of the potential impact it had on district budgets. The new model shifts from a classroom-based approach to one that distributes money based on the type of students each district educates.

Lawmakers balked at approving any major changes to the formula last session. Instead, they asked districts to collect more data, so they could better understand the effects of the proposed changes.

“We’ll have that preliminary data this session, with better definitions of at-risk kids,” noted Rep. Goesling, who sits on the House Education Committee. “So the formula will be an area of continued discussions.”

What to watch for: All of the Republican lawmakers on the Our Kids, Idaho’s Future task force either abstained or voted against the task force recommendations — including the chairmen of the House and Senate education committees.

Consequently, if the governor wants action on the task force recommendations, he may need to strong-arm lawmakers. Given some uncertainty regarding state revenue collections, the Legislature could also balk at putting another $100 million into the K-12 budget.

Outside of these issues, lawmakers will debate a whole host of proposals.

House Speaker Bedke and House Majority Leader Moyle recently suggested that property tax relief and redistricting will be two of the top issues during the 2020 session.

Rep. Thyra Stevenson, R-Lewiston, also noted that many of her colleagues are eying revenues from an online sales tax bill that was approved last session.

The legislation directed out-of-state retailers to collect the 6 percent sales tax on online sales to Idaho residents. The money flows into a special tax relief fund. Through the first four months of the fiscal year, the fund reportedly had a balance of more than $20 million.

“Everybody wants a piece of that,” said Stevenson, who serves as vice-chairwoman of the House Revenue and Taxation Committee.

Monks, the assistant majority leader, has been working on the issue for several years. His basic proposal, which is opposed by the Association of Counties and Association of Idaho Cities, would essentially shift a greater proportion of tax revenue to the state’s most populated cities and counties.

“The reality is that some cities aren’t receiving a fair (per capita) distribution, compared to others,” he said during a recent town hall meeting in Moscow. “I’m hopeful that’s something we can look at this year.”

Monks also mentions transportation funding as an issue that could be addressed this session.

Nelson, who sits on the Senate Transportation Committee, supported that effort. He noted that one of the casualties of the House-Senate dispute last year was the “surplus eliminator” funding mechanism, which directs a portion of any year-end general fund surplus to the Idaho Transportation Department.

Re-authorizing the surplus eliminator “is something we need to do right off the bat, before we lose a construction season,” Nelson said. “We still have a significant (funding) deficit on our highways and local roads.”

“If we don’t adopt our own (management plan), Idaho will be the only state in the nation that gives up its sovereignty on this issue to the federal government,” she said.

What to watch for: Plenty of bumps and bruises — and if the above issues don’t prove contentious enough, something else will surely come up.

“You never know what the big issue is going to be,” Moyle said.