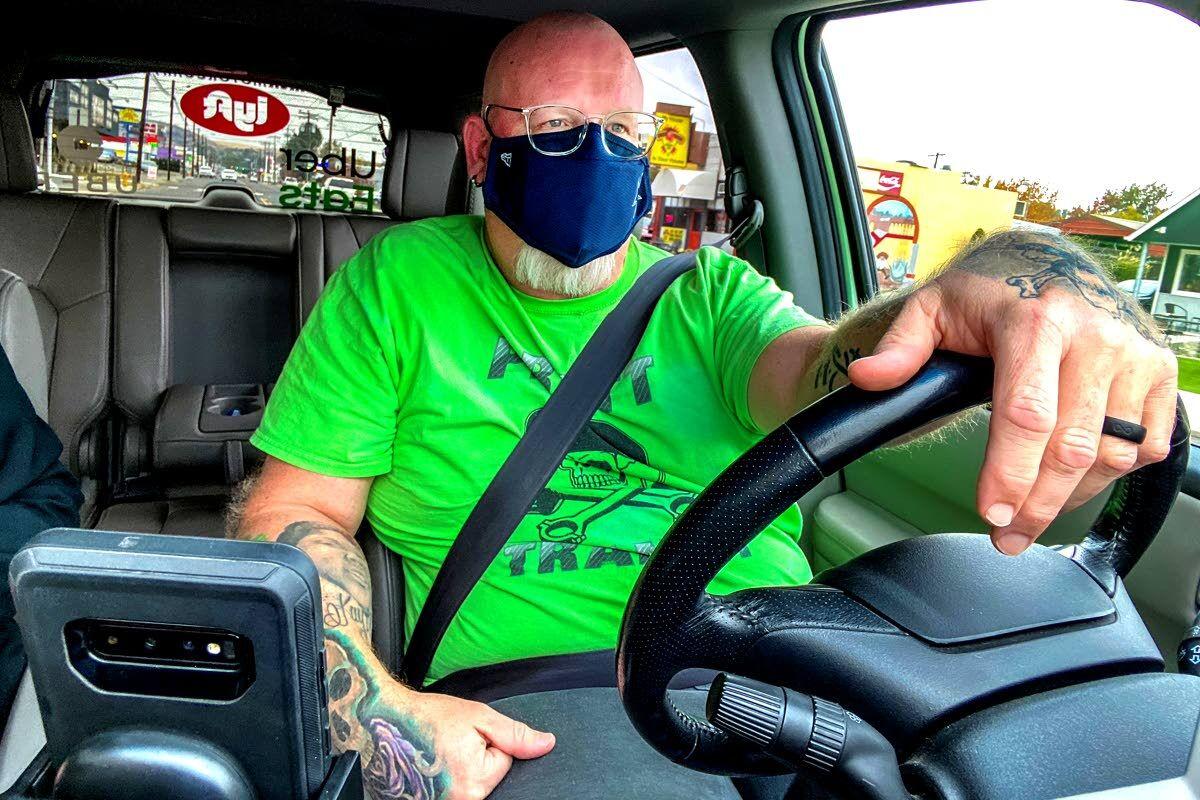 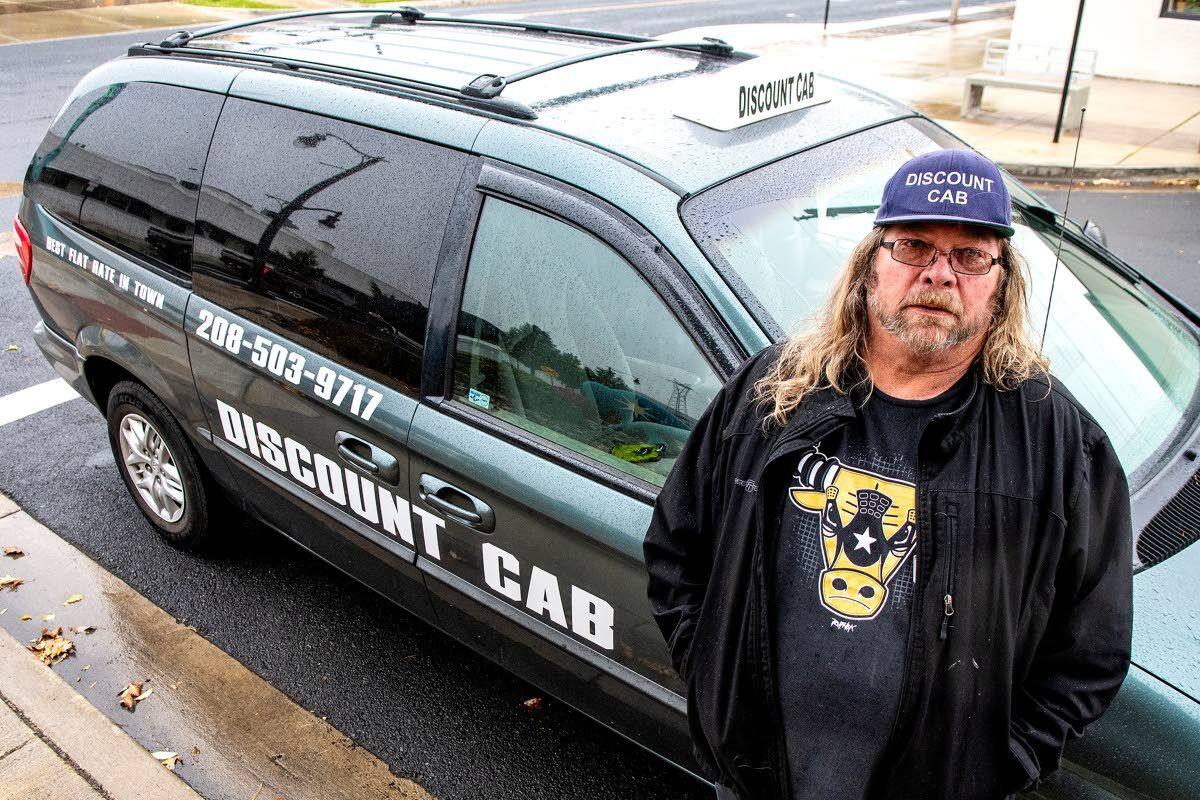 Larry Diebold, owner of Discount Cab, stands for a portrait last week in front of his cab. 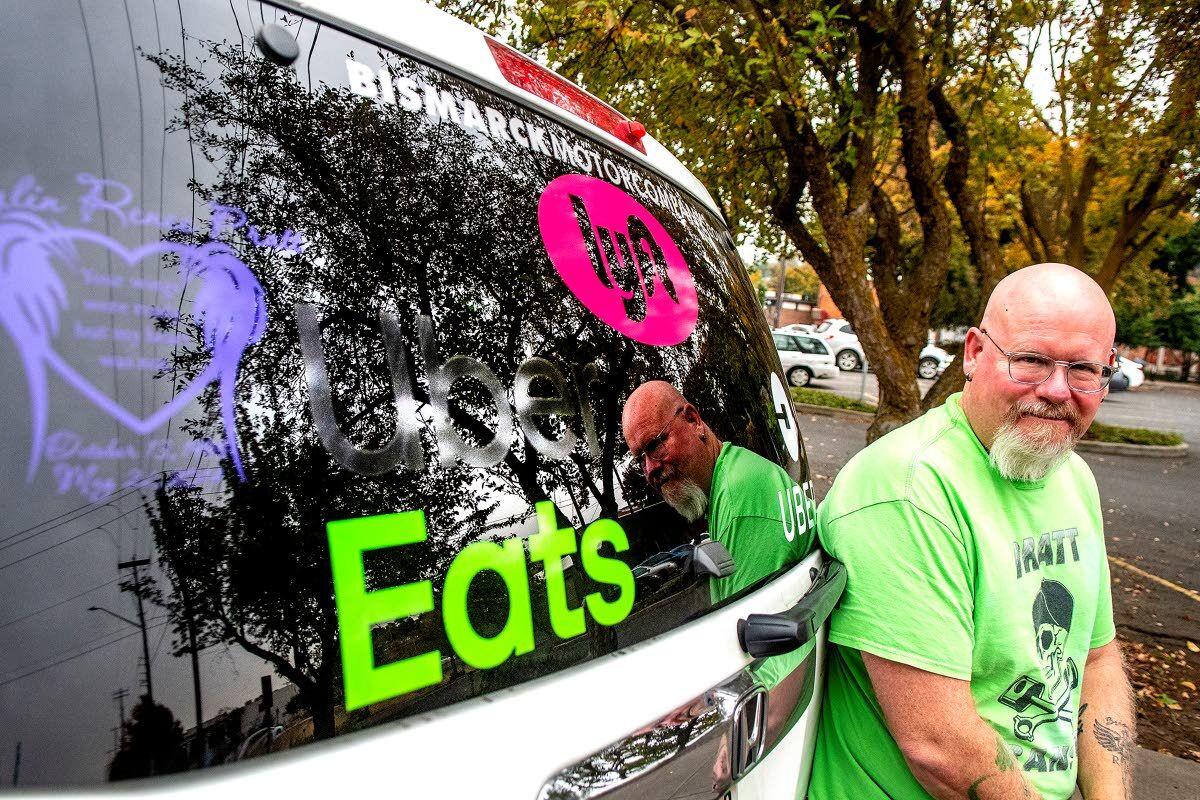 Mark Pratt stands outside his car, which sports logos for the ride-sharing companies he drives for, Uber and Lyft. Driving for Uber Eats has helped keep business consistent for Pratt during the pandemic. 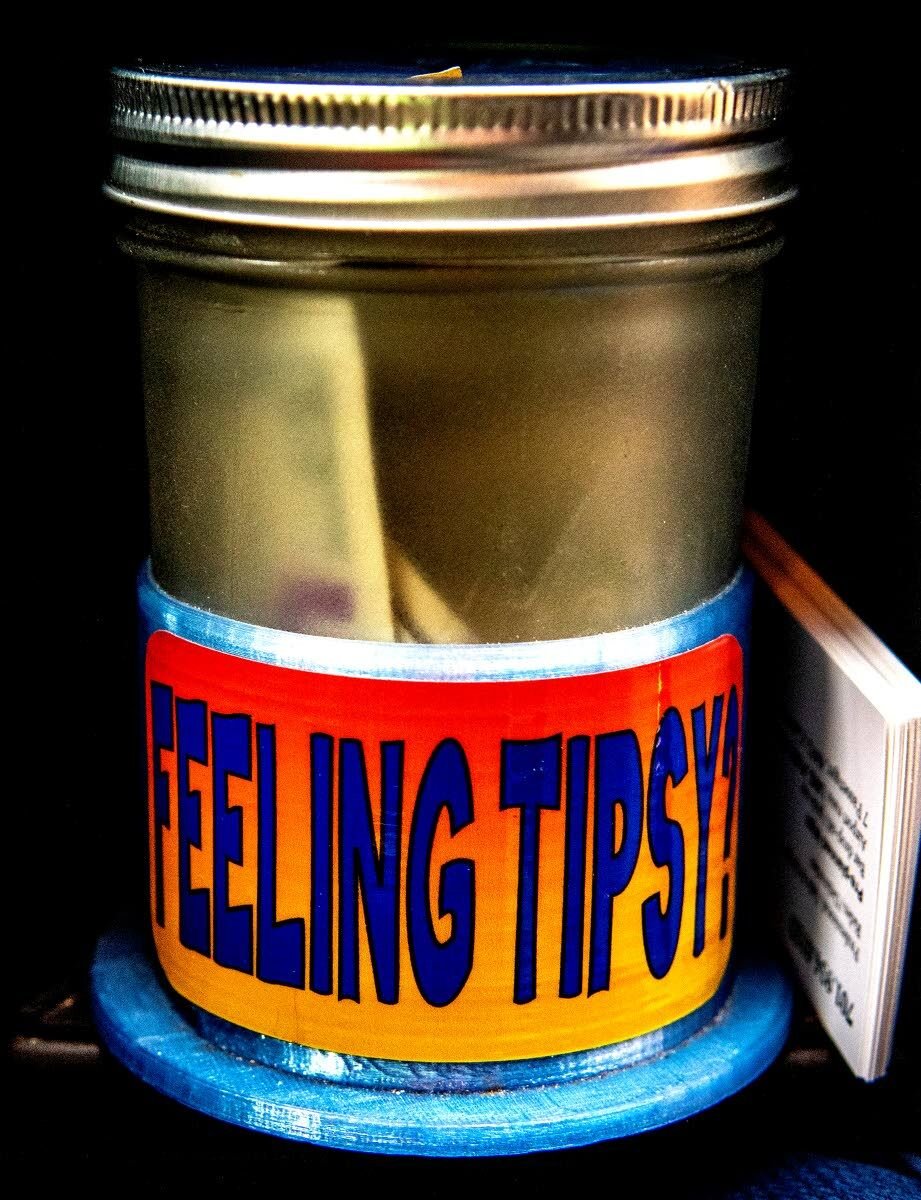 Mark Pratt's tip jar lights up when money is placed inside, something he said delights inebriated people he picks up from bars. 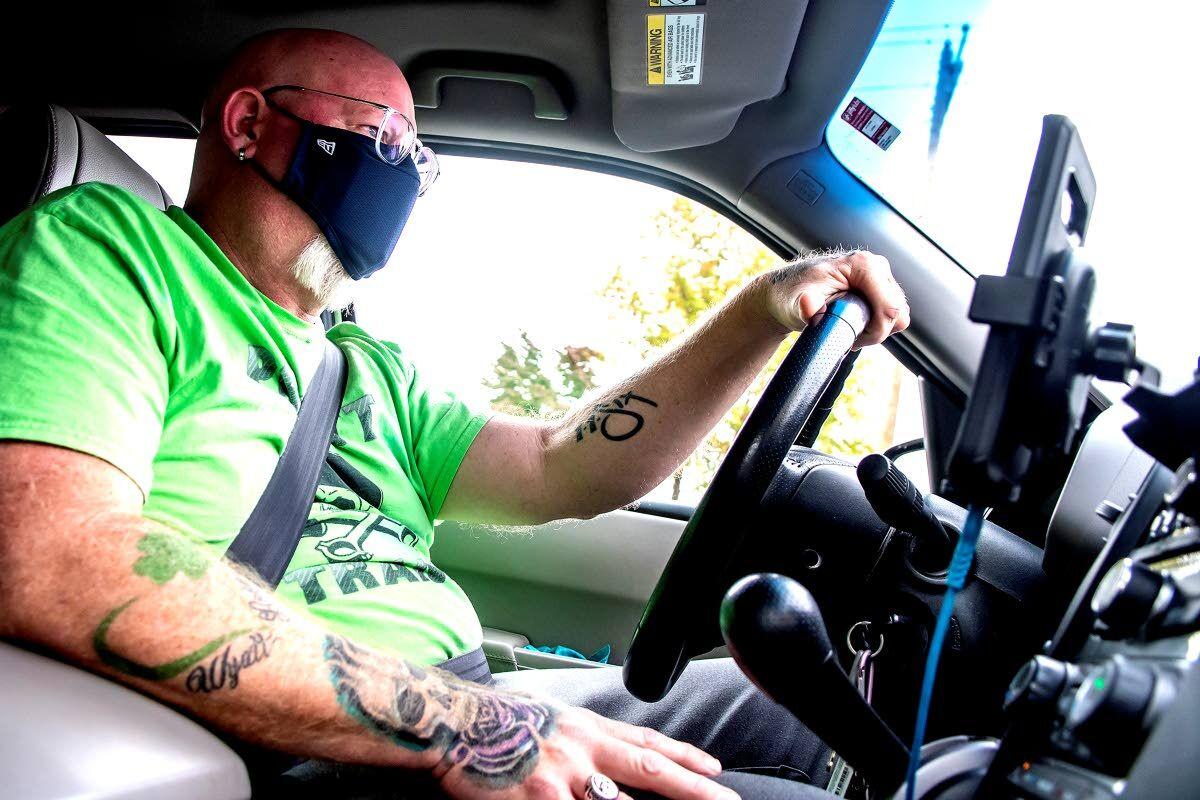 Mark Pratt, a driver with Uber and Lyft, drives through Lewiston. 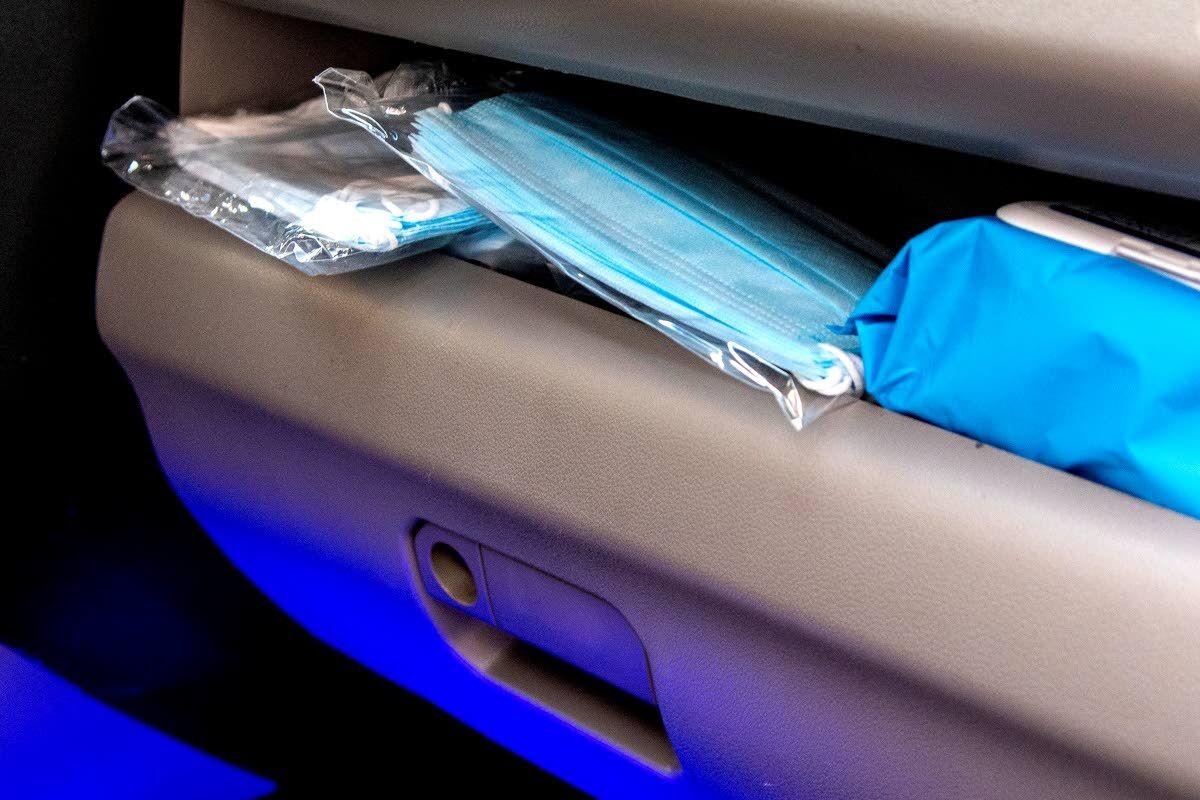 Masks and disinfectant wipes sit in Mark Pratt's car. Pratt, who drives for Uber and Lyft, is required to disinfect his car each day.

Larry Diebold, owner of Discount Cab, stands for a portrait last week in front of his cab.

Mark Pratt stands outside his car, which sports logos for the ride-sharing companies he drives for, Uber and Lyft. Driving for Uber Eats has helped keep business consistent for Pratt during the pandemic.

Mark Pratt's tip jar lights up when money is placed inside, something he said delights inebriated people he picks up from bars.

Mark Pratt, a driver with Uber and Lyft, drives through Lewiston.

Masks and disinfectant wipes sit in Mark Pratt's car. Pratt, who drives for Uber and Lyft, is required to disinfect his car each day.

In theory, hailing a ride to the airport or home from a bar after an evening that got a little out of hand is as easy as dialing a telephone number or ordering a driver on a smartphone app.

But in the Lewiston-Clarkston Valley, that isn’t always the case, even though the community has at least two taxi services and one driver contracted with Uber and Lyft.

The apparent scarcity of the service hurts the economy, making both locals and visitors less likely to venture out to bars or tour the area’s growing number of wineries, said Michelle Peters president and CEO of Visit Lewis Clark Valley.

“There’s not availability to get visitors who flew in from the hotels to downtown Lewiston and Clarkston,” Peters said. “If a visitor is in a hotel without a restaurant or a lounge, we’re losing money.”

The absence of consistent demand may be preventing more drivers from entering the market.

Canters Cab and Discount Cab both typically have at least one driver working in the Lewiston-Clarkston Valley and might sometimes add a second if there’s a special event, according to the owners of those businesses.

Mark Pratt began serving Lewiston as an Uber and Lyft driver in May. It’s a continuation of a business he started before moving to the area from Bismarck, N.D., to be closer to the extended family of his wife, Michelle Blewett Pratt, who was raised in Lewiston.

“It’s very typical (for people to do both Uber and Lyft),” he said. “We’re contracted. They can’t control who we work for, and they know drivers are driving both.”

Canters Cab began as a way to get patrons from Canters Inn in Lewiston home safely, said Ron Carpenter, manager of both businesses.

“It wasn’t paying the bills, so we had to open it up for the rest of the public,” Carpenter said.

Most times of day, Pratt said, taxis, along with Uber and Lyft, more than meet the demand for riders.

“I would never have more than two cars (even) on a busy night,” he said. “There’s just not the business to support that.”

Pratt is available at least 50 hours a week Monday through Saturday, taking Sundays off to watch football.

Since he works for Uber and Lyft in Idaho, not Washington, he can take passengers from Lewiston to Clarkston, but he can’t pick up passengers in Clarkston.

A large share of his business is early-morning travelers going to the Lewiston-Nez Perce County Regional Airport or on Friday and Saturday evenings driving people home from bars.

He also offers services such as shuttling kayakers and drift boaters back to their vehicles at the end of their outings.

In between transporting people, he does deliveries for Uber Eats, which recently expanded its service for national franchise restaurants to local eateries.

The popularity of Uber and Lyft might grow in Lewiston and Clarkston, he believes, if more drivers joined. That, he said, could encourage people to rely on the ride-share services for routine transportation such as going to and from work.

“Many people still (say) ‘I didn’t know we had Uber,’ and most people don’t have a clue what Lyft is,” Pratt said.

How affordable a ride is depends on a number of factors. Canters charges a per-mile rate of $2.25. The owner of Discount Cab, Larry Diebold, declined to provide prices because he doesn’t want his competition to have the information.

Pratt directed questions about price to the Uber and Lyft apps. A recent 1-mile ride in the Normal Hill area on a Thursday afternoon cost $5.89 after a 25 percent discount because a driver wasn’t available for a previous ride.

Riders, he said, can always check the price before they confirm the ride.

Uber and Lyft’s fees vary depending on the time of day and are a combination of a base rate for a ride plus the distance. The driver gets a little more than 50 percent of the fare and 100 percent of any tip.

“If you don’t get tipped, you won’t really make a whole lot of money doing this,” Pratt said.

Even if Uber, Lyft or a taxi seem a little expensive, the cost is minimal compared with the hazard of drinking and driving, Pratt said. (For passengers who vomit, a fee of $100 is automatically added so the vehicle can be cleaned.)

“I hope people realize (options) are out there, and there’s no reason to jump into your car or onto your motorcycle, even if you think you’re just a little buzzed,” he said.

The behavior of the drivers and passengers in taxis, Uber and Lyft is monitored in a variety of ways.

In Lewiston, any cab driver or cab company owner not with Lyft and Uber, is required to undergo a criminal background check, said Erika Stricker, the city’s business license coordinator.

The findings are reviewed to eliminate registered sex offenders, anyone with violent offenses and people who have had felonies of any kind in the last 10 years, Stricker said.

The city of Clarkston review would be for Uber and Lyft drivers and owners of cab companies, but it’s up to cab company owners to do background checks on drivers who are hired as employees, he said.

In Idaho, Uber and Lyft drivers adhere to the standards of those companies, Pratt said.

That process includes passing a background check that weeds out people based on criminal and driving offenses, he said.

Additionally, drivers and passengers both are monitored for their behavior and encouraged to rate each other on a five-point system, Pratt said.

Passengers and drivers aren’t paired together if either party has rated the other three points or below.

He takes those precautions one step further and has a video camera in his vehicle that also records audio. He’s only looked at the footage a handful of times, on the rare occasions he’s had issues, but views it as protection for him and his customers.

“I keep my car super clean,” he said. “I want (my customers) to have top-of-the-line service for however long they’re in the car with me.”

What’s up with that? is a reader and Tribune question-generated column that runs on occasion. To submit your question, call City Editor Mary Stone at (208) 848-2244, post to the Tribune’s Facebook page or email city@lmtribune.com with What’s up with that? in the subject line.