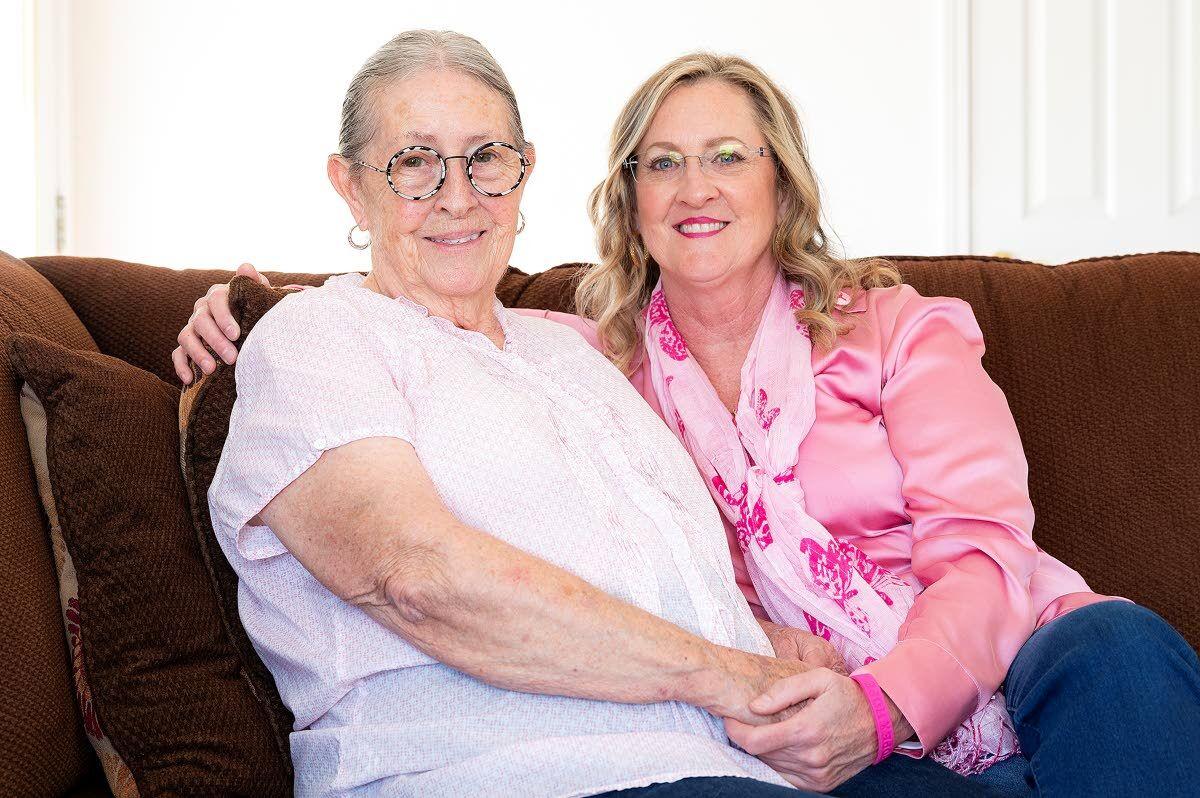 Louise Beavert and her daughter, Cindy Slatter, pose for a portrait at Beavert’s home in Clarkston on Wednesday afternoon. Both woman will participate in the Jog for the Jugs on Saturday morning at Lewiston. 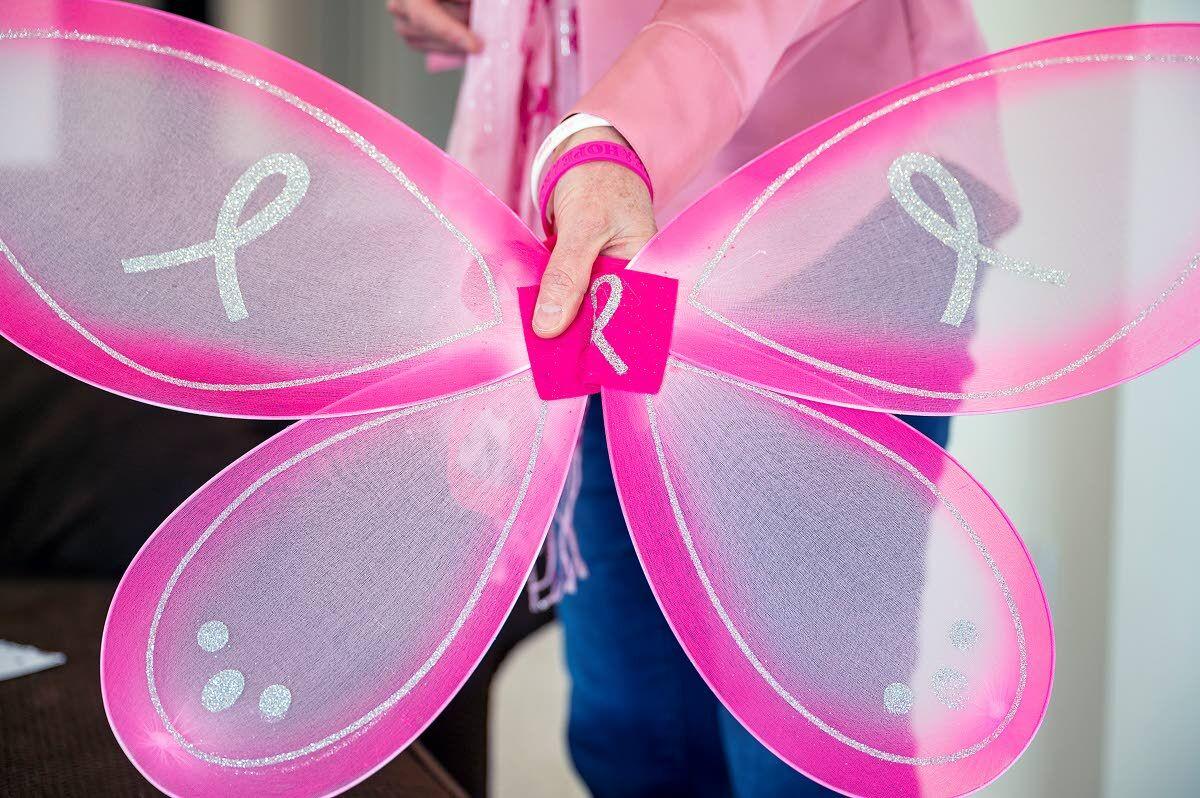 Cindy Slatter shows a pair of butterfly wings that she and her family plan on wearing during the Jog for Jugs fun run on Saturday at Lewiston.BELOW: Louise Beavert and her daughter, Slatter, pose for a portrait at Beavert’s home in Clarkston on Wednesday afternoon. 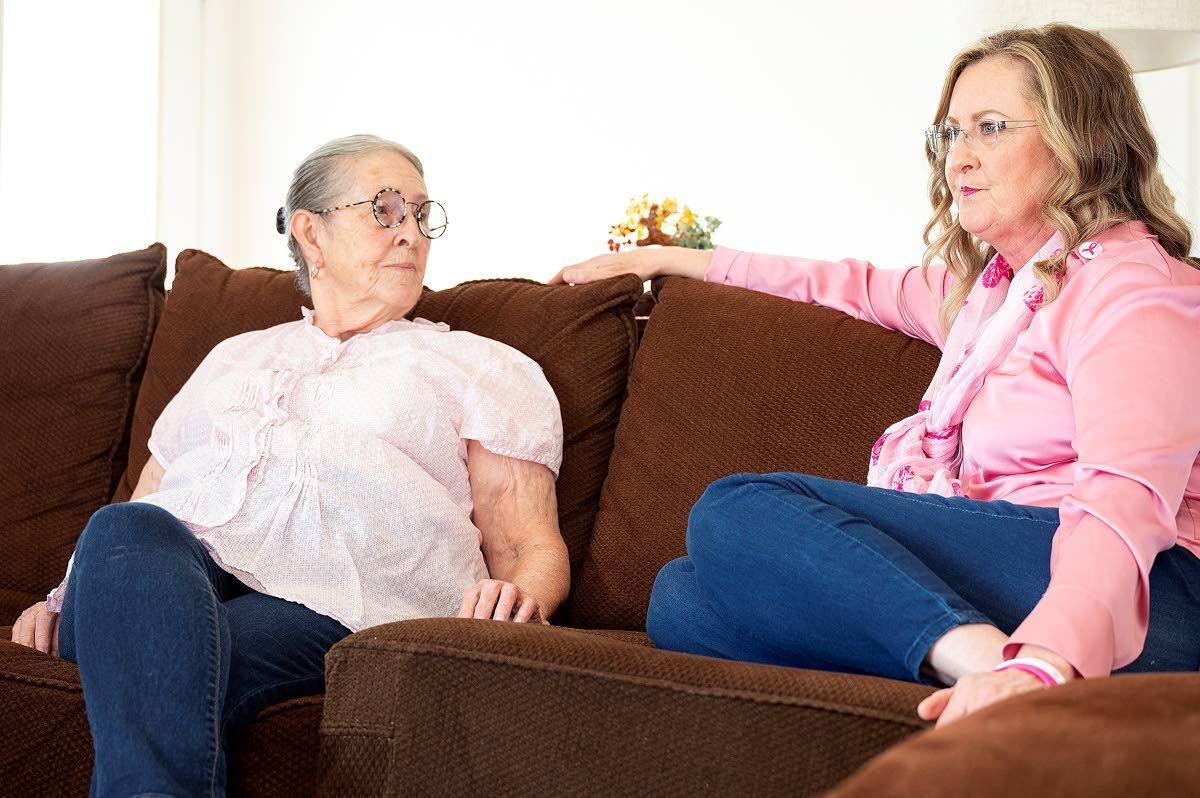 Cindy Slatter and her mother, Louise Beavert, talk about their experiences battling breast cancer over the past year while at Beavert’s home in Clarkston on Wednesday.

Louise Beavert and her daughter, Cindy Slatter, pose for a portrait at Beavert’s home in Clarkston on Wednesday afternoon. Both woman will participate in the Jog for the Jugs on Saturday morning at Lewiston.

Cindy Slatter shows a pair of butterfly wings that she and her family plan on wearing during the Jog for Jugs fun run on Saturday at Lewiston.BELOW: Louise Beavert and her daughter, Slatter, pose for a portrait at Beavert’s home in Clarkston on Wednesday afternoon.

Cindy Slatter and her mother, Louise Beavert, talk about their experiences battling breast cancer over the past year while at Beavert’s home in Clarkston on Wednesday.

Among the 250 participants signed up for the Jog for the Jugs fun run will be a mother and daughter who were both diagnosed with the disease last year and are now recovering. Dealing with breast cancer and multiple losses during a pandemic took a toll, but they are both grateful to the Gina Quesenberry Foundation for helping them during such a difficult time.

Cindy Slatter, 60, and her mother, Louise Beavert, 86, said they are happy to support the nonprofit organization’s fundraiser, and they’ll both be wearing butterfly wings along the route.

“We’re all signed up and wouldn’t miss it,” Beavert said.

Walking along the Snake River on a spring day will be a treat, after what the Clarkston women have endured in the past 14 months.

“It was a devastating year,” Slatter said. “Mom lost her only sibling to breast cancer in March and her oldest daughter, my sister, died of lung cancer on Aug. 3.”

Through testing, physicians have determined the family’s prominent cancer streak is environmentally related, rather than genetic.

Beavert’s grandma also had breast cancer in the 1950s, and she still remembers seeing her crying in pain after surgery. “In those days they removed a lot of lymph glands, too, and she was in so much pain,” Beavert said.

Medical technology is better now, but both women experienced some side effects from their mastectomies. Slatter said she had a great doctor in Spokane, while her mother underwent the procedure in California, which didn’t go as well.

Beavert, a mother of four, was diagnosed with breast cancer in the middle of July and had a double mastectomy in August.

“My surgeries were a fiasco,” Beavert said. “When I got home, my incisions turned black and opened up. I sent a picture to the surgeon in California, and she told me to contact someone locally to fix it.”

Beavert wound up going to Dr. Steve Ozeran in Lewiston for repairs, and she’s thankful for his skills and said she is feeling much better now.

“My cancer was in my milk ducts,” Beavert said. “But they were small cancers, which was a blessing. I thank God every day that they were little.”

In addition to going through two major surgeries within two months, Beavert was mourning the losses of her sister and daughter. She said it was overwhelming when she and Slatter received similar diagnoses in the middle of their grief.

“The worst year of my life was 2020,” Beavert said during an interview at her immaculate Clarkston Heights home.

As they shared their stories, Slatter, a mother of three who worked for the Clarkston School District for 27 years, leaned over and hugged her mom.

“She’s amazing,” Slatter said. “She’s 86 going on 20. She still digs every dandelion in the yard, rolls her own sushi and makes Quilts of Valor. She’s not just my mom, she’s my best friend. Thanks to her, I have the blood of many strong women in my veins.”

Slatter was taking care of her mother and working as an adjunct instructor for Spokane Community College when she got the news about her own cancer.

“I was in the middle of teaching a home health aide class in Walla Walla on Oct. 3, when my OB/GYN called me,” Slatter said. “He said my mammogram was like looking at the Milky Way, even though I had no symptoms. He referred me to a breast surgeon in Spokane, Dr. Carol Guthrie, who is one of the best in the region. She is wonderful, and after I contacted her, she called me back right away.”

Slatter had her surgery Nov. 23, which is also her late sister’s birthday. She recalled being especially emotional that day, and said the hospital staff took pity on her and allowed two family members to visit, despite the pandemic restrictions.

However, when she returned to Clarkston, her husband, Les, developed COVID-19 symptoms, and she had to be quarantined.

“I had to stay alone on Thanksgiving in a hotel,” Slatter said. “That was a tough one. I also called multiple area resources, which was a horrible experience. I was getting no emotional support, and I was asking for referrals for counselors and grasping for some help.”

Then she dialed the number of the Gina Quesenberry Foundation in Lewiston.

“Laynie (Moser) was amazing,” Slatter said. “She is a busy woman, but she took time out of her schedule for me and provided so much information. I was floored when the foundation sent me a $1,000 check to help with expenses and a $100 gift card at Christmas.”

Beavert also received money from the foundation and the Christmas gift, which was a big boost.

Treatment for this disease affects the entire family, and can be emotionally and financially devastating, said Moser, daughter of the late Gina Quesenberry, who died from breast cancer. Moser also has firsthand experience of the disease and underwent the same procedures as Slatter and Beavert to remove it.

“In memory of my mother, the purpose of this foundation is to help area breast cancer patients in need, offering financial assistance with chemo treatments, heating bills, wigs, or whatever the need may be,” Moser said on the foundation’s website. “Our hope is that this foundation will bring a measure of comfort to people suffering with this devastating disease, and to allow them to focus on their treatment.”

Beavert said she’s writing her own obituary and plans to ask people who want to donate to a charity in her name to support the Gina Quesenberry Foundation. All of the money is spent on local patients.

Slatter and Beavert said they are extremely appreciative of the foundation, and looking forward to Saturday’s Jog for the Jugs event.

“We’re going to have a pretty good crew there,” Beavert said. “My oldest daughter’s two sons are here for Mother’s Day, and they’re going to participate, too.”