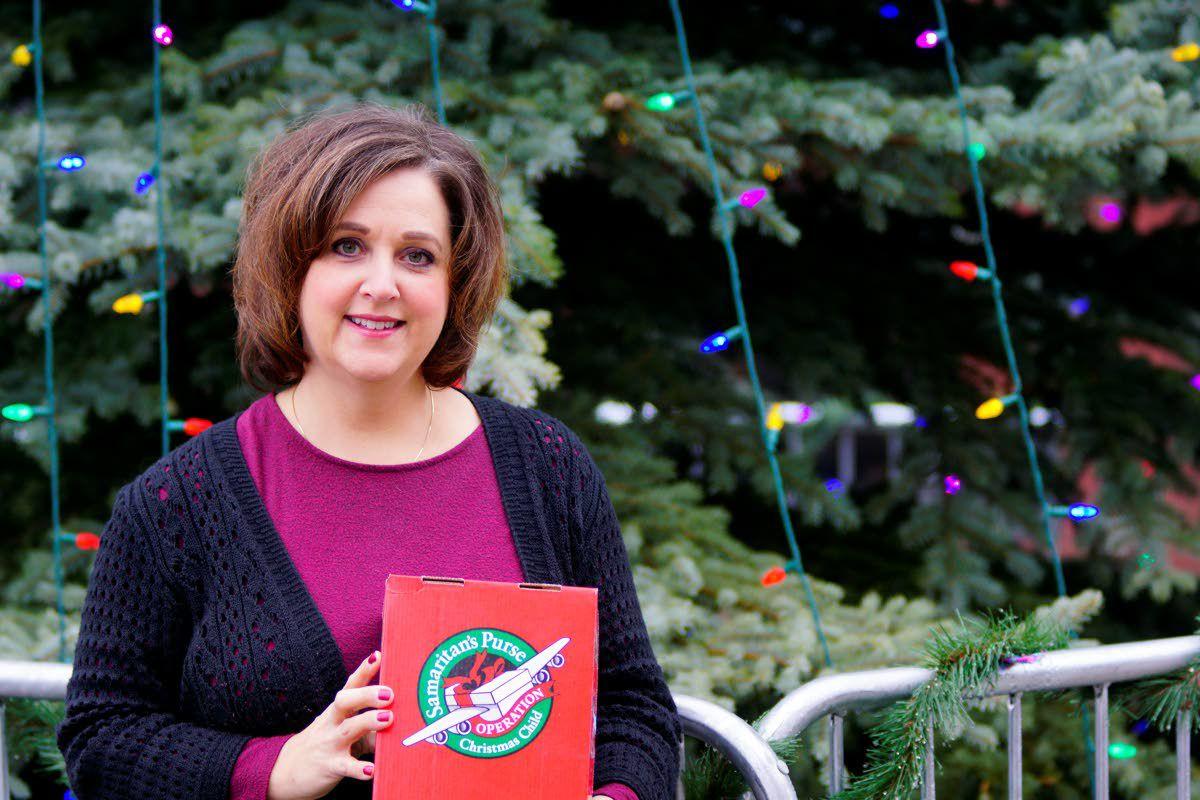 Jannell Farrell, of Moscow, holds a shoe box for Operation Christmas Child, a program that sends the small boxes of gifts to children in need. Farrell is the regional coordinator for the program. 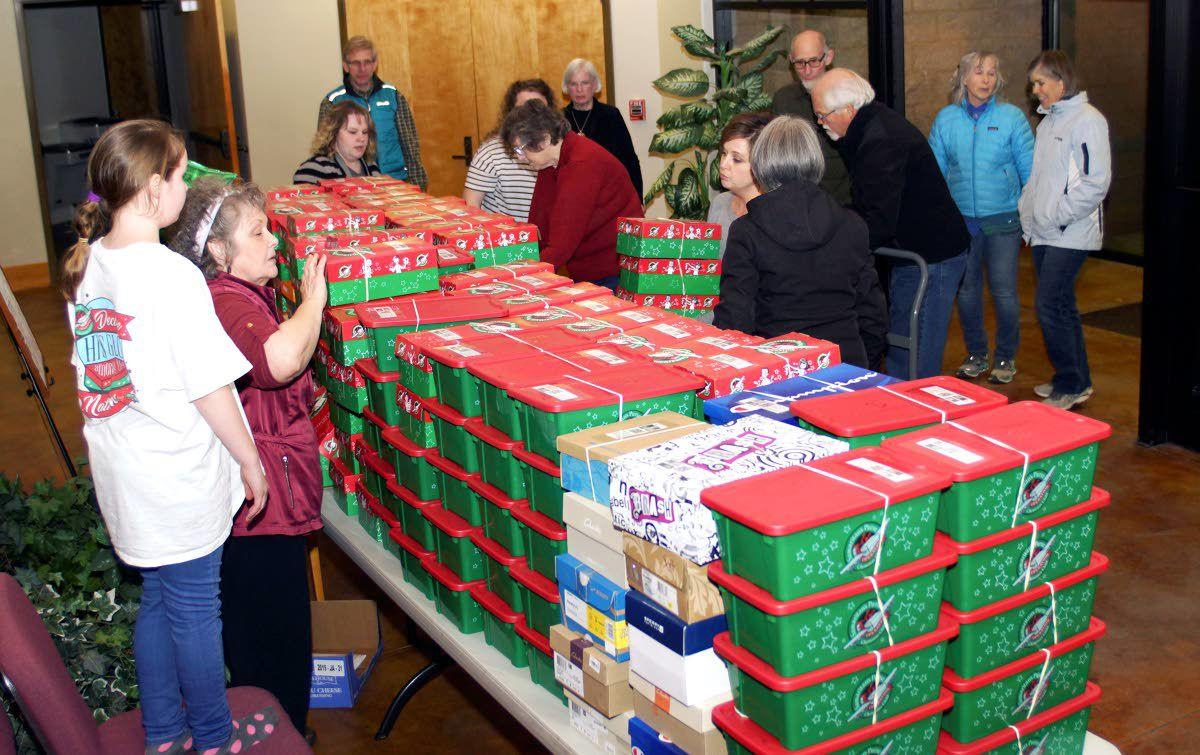 Volunteers at Trinity Baptist Church in Moscow stack and count the 249 shoebox gift packages assembled and delivered by the members of Jean Wall's Bible study group in Nov. 2018. The group has been taking part in filling the boxes for Operation Christmas Child for three years. It took the 15-member group about half an hour to complete them this year.

Jannell Farrell, of Moscow, holds a shoe box for Operation Christmas Child, a program that sends the small boxes of gifts to children in need. Farrell is the regional coordinator for the program.

Volunteers at Trinity Baptist Church in Moscow stack and count the 249 shoebox gift packages assembled and delivered by the members of Jean Wall's Bible study group in Nov. 2018. The group has been taking part in filling the boxes for Operation Christmas Child for three years. It took the 15-member group about half an hour to complete them this year.

MOSCOW — When Christmas came to the west coast of Africa last May, Jannell Farrell was there.

As the Palouse-Clearwater regional coordinator for Operation Christmas Child, Farrell was invited to help distribute hundreds of shoe box-size gifts to children in Liberia.

She remembers the looks on the kids’ faces as they opened the boxes, their stunned surprise and pleasure. It was like they’d been handed a tiny treasure chest, each one full of unexpected riches: pencils and erasers, a colorful scarf, maybe a toothbrush or a bar of soap, maybe even a soccer ball.

“I’d never seen such poverty,” Farrell said. “That might be the only gift they’ll ever receive. That’s what (Operation Christmas Child) is all about: We just want these kids to know that they’re loved, that they have value.”

She recalled one little girl who got a pair of red flip-flops.

“She was hugging them to herself, with just the biggest smile on her face,” Farrell said. “She said, ‘God knows my shoe size.’ ”

Operation Christmas Child is an annual program of the Samaritan’s Purse Christian organization. It collects shoe box-size gift packages from individuals, churches and community groups and, in partnership with international ministry groups, distributes them to children in war-torn or distressed areas around the world.

Farrell has been a year-round volunteer for the program since 2013. Her role is to oversee the various church and community groups that provide the gift boxes, making sure they have what they need and understand the restrictions on what can and can’t be included. She also coordinates training workshops for the individual project leaders, and generally serves as the program’s head cheerleader.

“That’s really my love — to be encouraging and help others reach their goals,” she said.

The Palouse-Clearwater region collected 6,189 gift boxes this year — a nearly 20 percent increase over last year. The boxes were shipped to regional processing centers in November. Farrell hasn’t heard yet where their ultimate destination will be.

“A lot of times it just depends on logistics,” she said. “In the past, a lot of our boxes have gone to Mexico, the Philippines, Haiti. We usually find out around mid-December.”

Although the boxes arrive in time for Christmas in some locations, they’re distributed year-round — as in the case of the boxes she helped distribute in Liberia.

“They have to go through customs, and then they go to the (local) headquarters and finally get delivered to different locations by bus or truck or boat,” Farrell said. “The logistics are amazing.”

More than 110 churches take part in the program in this region, she said, as well as a handful of community groups. However, about a third of the boxes come from individuals.

The boxes typically include one “wow” gift, such as a soccer ball or stuffed animal, as well as school supplies, hygiene products, clothing and crafts. Different gifts are recommended based on the age and sex of the child, but the person packing the box chooses what to include.

The contents typically cost around $20, Farrell said. That cost is borne by the person who provides the box; a $9 donation is also requested to cover shipping.

Some people provide one or two boxes, while others may provide 20 or 30, she said. One Moscow woman, Jean Wall, typically does between 200 and 500 boxes each year.

“That’s her ministry,” Farrell said. “She’ll shop all year round. She has a whole system for how she does it. We’ve learned a lot from her.”

Wall could not immediately be reached for comment. She told the Moscow-Pullman Daily News last year that her parents taught her to give.

“As my dad would say, ‘We have been blessed. Therefore, we should bless others,’ ” she said.

Although there is certainly a gospel component to Operation Christmas Child, Farrell said many people participate simply to help children around the world.

“It’s neat to see that we can be part of someone’s life story,” she said. “A simple, thoughtful gift can make a huge impact on the life of a child in need.”

Farrell saw that when she helped distribute boxes in Liberia. But the other memory from that trip was the look on the faces of the children who weren’t able to get a box, because there weren’t enough.

“That was the hardest part,” she said. “There’s always a need for more shoe boxes.”

More information about Operation Christmas Child can be found online, at www.samaritanspurse.org.

Today’s story marks the first in a series set to run periodically through December highlighting people in the Lewiston Tribune readership area whose generosity of spirit and willingness to take action — at the holidays or year-round — contribute to the community. Nominations can be made by calling City Editor Mary Stone at (208) 848-2244 or emailing mstone@lmtribune.com.

How concerned are you about the downturn in the stock market?