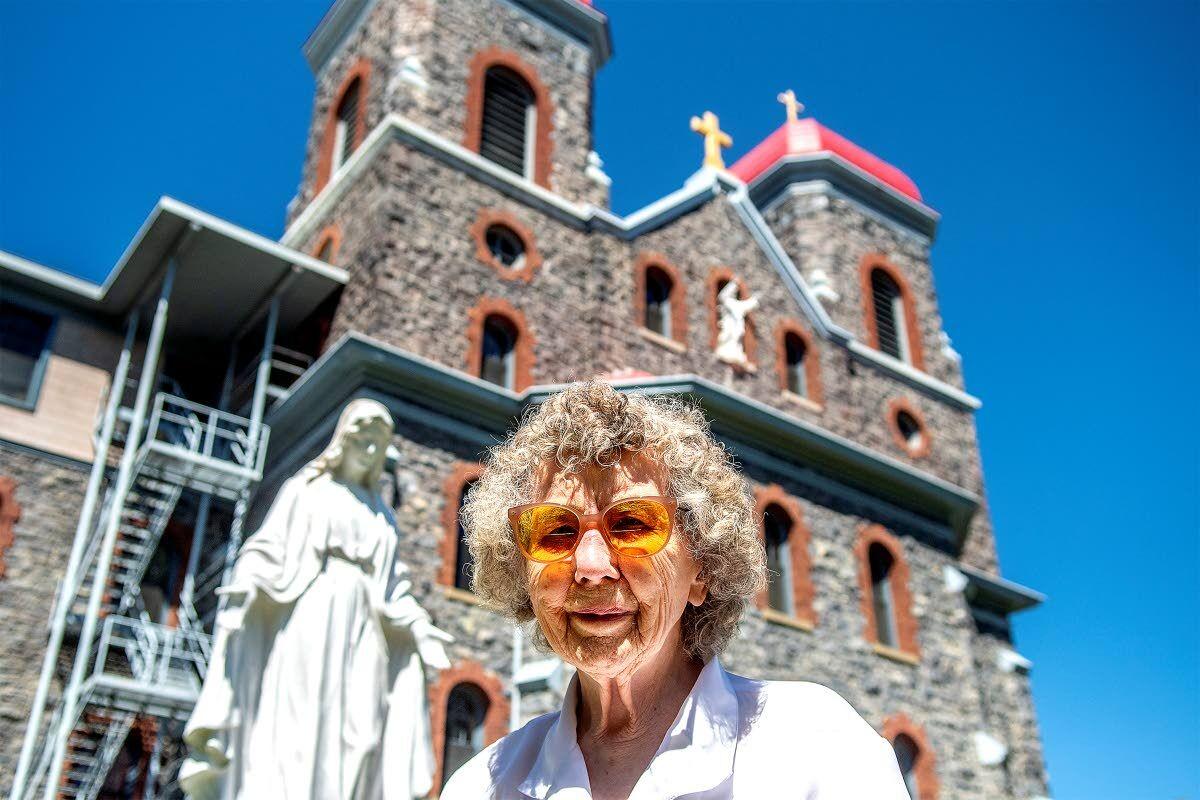 Sister Marie Elena Schaefers stands outside the Monastery of St. Gertrude in Cottonwood. Schaefers, 93, was a missionary in Colombia before returning to the United States, where she spent years ministering in prisons. She still corresponds with inmates whose lives she has touched. 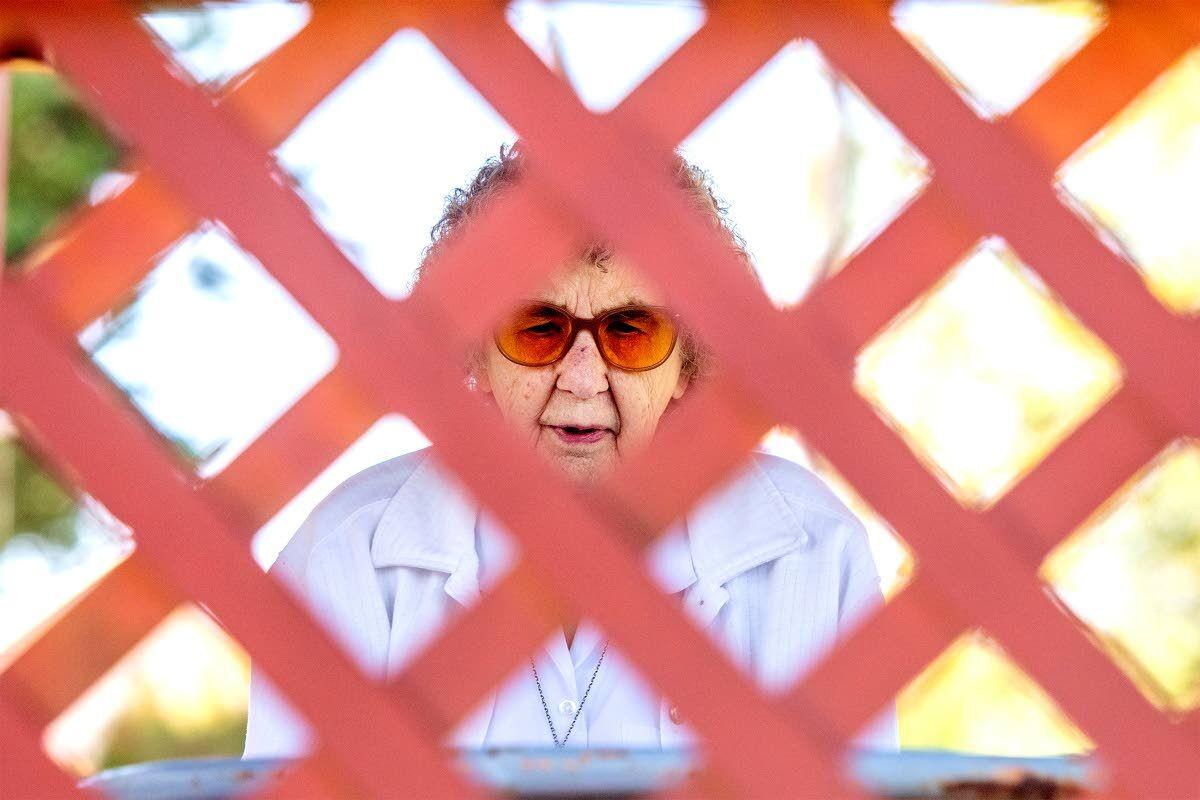 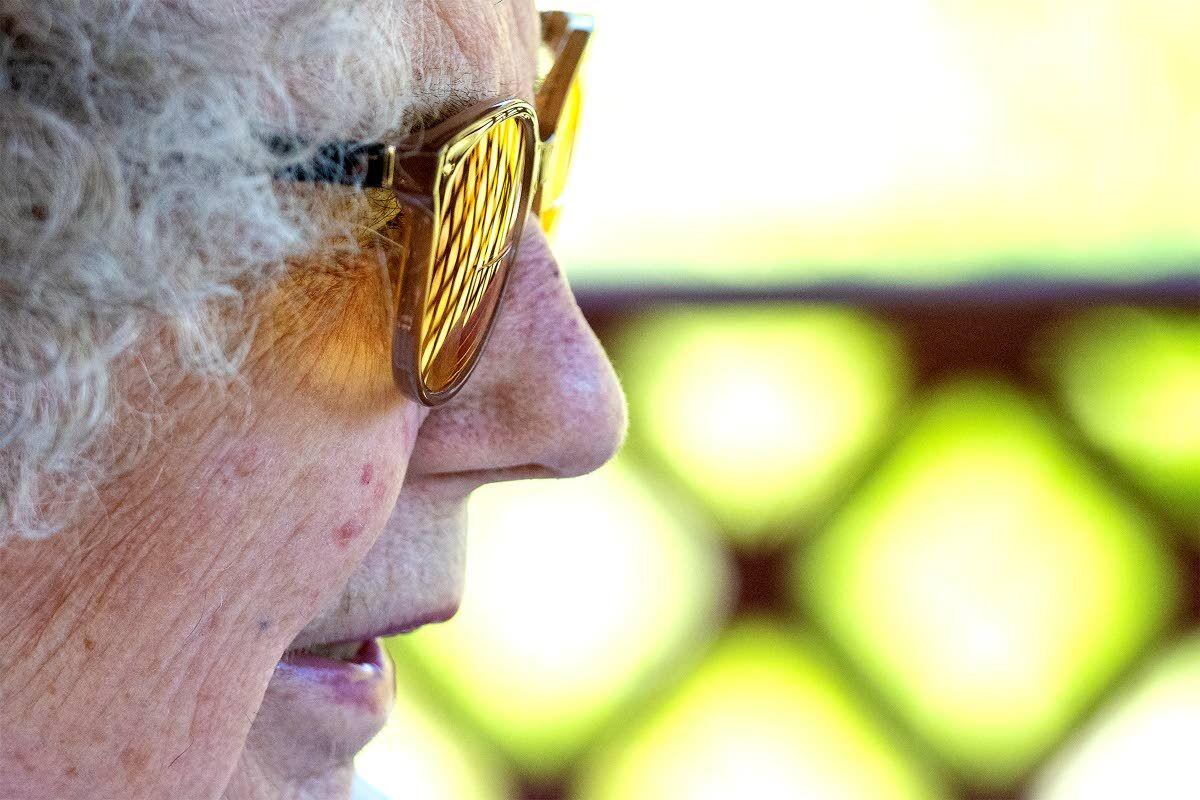 The sides of a gazebo at St. Gertrude’s Monastery in Cottonwood are reflected in Sister Marie Elena Schaefers’ glasses as she discusses her times working with the inmates at the North Idaho Correctional Institution. 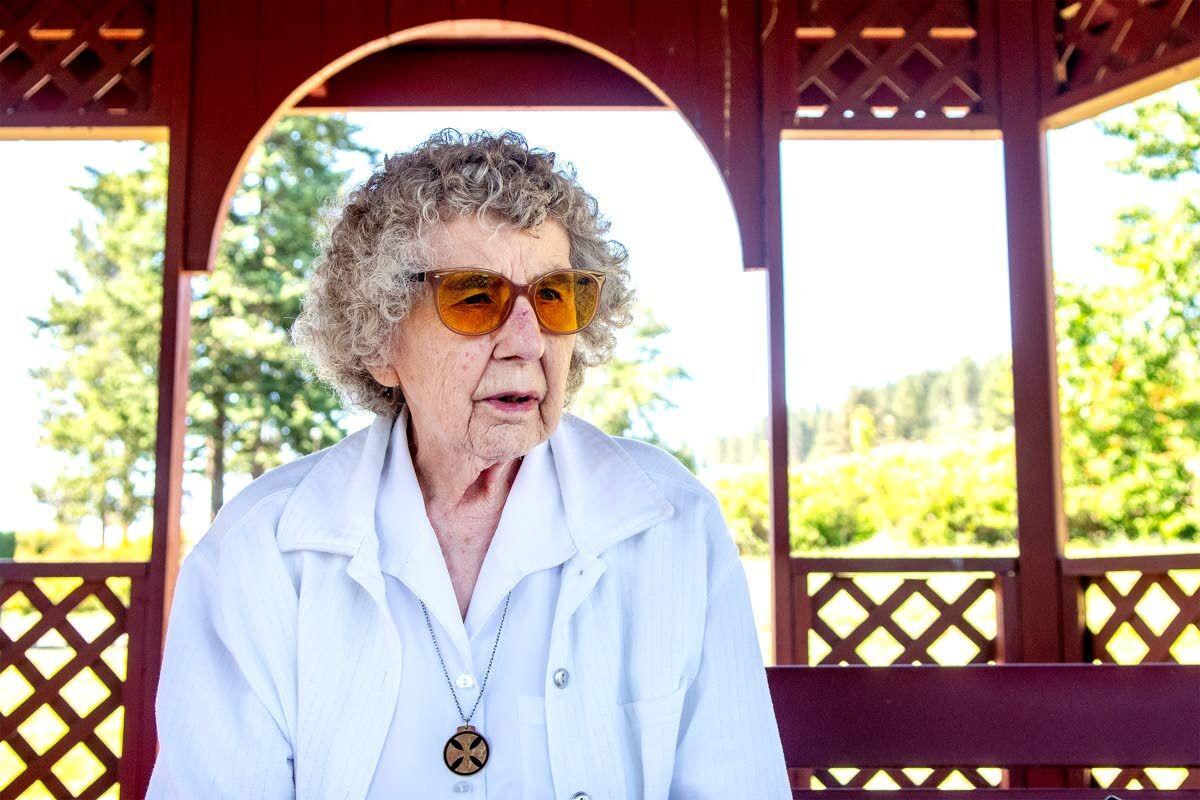 Sister Marie Elena Schaefers discusses her experiences working with inmates at the nearby North Idaho Correctional Institution recently at the Monastery of St. Gertrude in Cottonwood.

Sister Marie Elena Schaefers stands outside the Monastery of St. Gertrude in Cottonwood. Schaefers, 93, was a missionary in Colombia before returning to the United States, where she spent years ministering in prisons. She still corresponds with inmates whose lives she has touched.

The sides of a gazebo at St. Gertrude’s Monastery in Cottonwood are reflected in Sister Marie Elena Schaefers’ glasses as she discusses her times working with the inmates at the North Idaho Correctional Institution.

Sister Marie Elena Schaefers discusses her experiences working with inmates at the nearby North Idaho Correctional Institution recently at the Monastery of St. Gertrude in Cottonwood.

Finding the good in other people is a lifelong vocation for the 93-year-old nun, who has been part of the Benedictine sisters of the Monastery of St. Gertrude in Cottonwood since 1944.

Take the case of Tim. Born into a large Catholic family, Tim and his siblings attended Sacred Heart Catholic school in Boise, where Schaefers was teaching at the time. She didn’t teach him directly, but she had some of his sisters and brothers in her classes.

“When he got out of high school, he was in Vietnam,” Schaefers recalled. “He came back, got married, had a child, … but I think the war does things to the men and women. There’s a reason behind it. The war just does things to them.”

After returning home, Tim started drinking and taking drugs, Schaefers said. One day he was working in the woods, and a young girl was there, a runaway.

“She went with him, and on the way back he just went totally berserk and he killed her. It was pretty terrible,” she said. “But as soon as he realized what he had done, he turned himself in … and they went to look for the pieces.”

Tim was sentenced to life in prison.

“I think in the beginning he was feeling pretty bitter about the whole thing, and then gradually he started praying,” Schaefers said. “He even had a group to pray with, and they went to chapel to pray the rosary.”

Tim eventually became a mentor to other young men in prison. Schaefers said she became reacquainted with him there and realized the respect the other inmates had for him.

“He was a kind of a leader for them, and he was really good. Demanding. And then he got cancer,” she said. “The family wanted to take care of him but (the prison authorities) wouldn’t let them, so he died in prison when I was still there.”

Tim’s memorial at the prison drew nearly 100 inmates, many of whom spoke about the influence he had on their lives or sang a song in his honor.

“It was one of the best memorials I’ve ever been to,” she said. “The men said they really missed him.”

Schaefers was born in South Dakota in 1927 and grew up in a devoutly religious family. The family moved to Nampa, where her father worked for the railroad, and her teachers inspired Schaefers to consider a religious vocation.

At age 14, she visited St. Gertrude’s and shortly after began the process of becoming a sister. She made her first profession at age 17 and her final profession when she was 21.

She started teaching elementary school at St. Maries, but in 1964 she joined other sisters from the monastery and Idaho priests to work as missionaries in Colombia, South America.

The people she helped minister to were among the poorest in the country.

“Again and again we heard testimonies of God’s providence: how God had stretched the rice in the pot to feed the family or how God had helped a father find work that didn’t pay much but fed the family each day,” she said.

She helped establish schools, administer relief programs, minister to people with drug addictions and improve housing opportunities, and she taught in Colombia’s growing parishes. She said one recovering man told her: “I want you to know since you’ve been my friend I haven’t attacked or robbed anybody.”

In 1997, Schaefers returned to Idaho and resumed her ministries in the Boise area, visiting the sick, dying, grieving, shut-ins and families. She prayed with them for their needs and said prayers of gratitude when they were helped.

Adjusting to life back in the States was difficult at first. She recalled several young boys where she was teaching school talking about video games they were playing. Schaefers asked how much the games cost.

“Well, when I was still here in the States and something was cheap it was 15 cents. And kids thought if something was $50 it was cheap. It took a long time, and even yet it still kind of shocks me.”

When a request came in for prison volunteers, Schaefers wasn’t interested at first because she was busy enough with her parish work. But when she heard bilingual volunteers were especially needed, she jumped at the chance.

She worked with a group of about 120 other volunteers in the men’s medium security prison at Boise, the Ada County Jail and the youth detention program, accompanying a priest to assist with Mass and working with the Hispanic inmates.

“We’d go through the reading for the Sunday and think of what is the thing that we’re being taught?,” Schaefers said. “What is the Lord asking us to be better at?”

She said one man told her his life’s philosophy was to drink, steal, swear and lie, meaning, “drink from the everlasting cup every day. Steal a moment every day to do something for somebody that’s worse off than you are. And out at the prison there are plenty. They’re worried because they got bad news, somebody is sick, the kids aren’t behaving or somebody lost a job — all kinds of things.

“Swear — not cuss — swear that today I’ll be better in one thing than I was yesterday. Gradually we’ll improve. And we all need improvement.

“And lie: When you lie in bed at night, thank God for the day you had, some nice thing that happened, and ask forgiveness if there’s anything to forgive, and then close your eyes and go to sleep.

“And some of the men have told me afterwards, `You know, I’m really trying to live according to that.’ “

Schaefers moved back to St. Gertrude’s six years ago because of her failing eyesight. Though she was in her mid-80s at the time, her ministry to others did not stop. Until the coronavirus pandemic ended prison visits, she accompanied the Rev. Paul Wander of Cottonwood weekly to the North Idaho Correctional Institution a few miles from the monastery.

She still communicates with the inmates by phone. And on Mother’s Day, several of them displayed their affection for her when they sent a large, handmade greeting card.

She continues to hear from many of the inmates she met over the years, those she encouraged to trust in God and in themselves and whom she taught to share whatever gifts they have with others.

COTTONWOOD — The Monastery of St. Gertrude launched a fundraising campaign to remodel the 70-year-old residential annex of the monastery to meet the growing needs of the community.

The project is intended to transform the dormitory-style building into a Benedictine residential community to prepare for new vocations, including women who want to live the Benedictine life. The renovation project is scheduled to begin in the fall, and completion is expected in the spring of 2021.