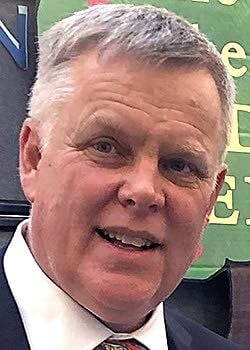 Idaho state Sen. David Nelson and former Sen. Dan Foreman will square off in the Nov. 3 general election, in a repeat of their 5th Legislative District contest in 2018.

Nelson, D-Moscow, won the first go-around by a margin of 56 percent to 44 percent. Foreman, of Viola, was unopposed in this year’s Republican primary, giving him a chance to regain the seat he held in 2017-18.

The one issue the two candidates truly agree on is that they offer the voters a clear choice.

“We have different views on pretty much everything,” Foreman said of his opponent. “We’re apples and oranges. If you’re an apple, don’t vote for an orange. I think people should look at what they want out of government and then look at the two candidates. People who are concerned with the issues I’m concerned about should vote for me.”

Nelson said he’s the best choice for people who want a representative in Boise — someone who will listen to their concerns and then work with other lawmakers to solve problems, rather than a “fringe” candidate who just wants to cut budgets.

“I get that people in Idaho like small government; I do too,” he said. “But government does perform important functions. ... So do voters want good government that can provide the services that help them and their families succeed, or do they just want to cut things to the bone?”

Foreman certainly favored the lean government approach during his two years in the Legislature. He voted against most appropriations bills — including the University of Idaho’s higher education budget, twice, saying it contained “too much pork.”

“I will stand on guard against wasteful spending,” he said.

Foreman hopes to get back on the Senate Health and Welfare Committee, where he previously served. He thinks the state should gradually rein in spending on welfare programs, saying that type of assistance is best left to families, churches and other nonprofits.

He also pledged to reintroduce legislation that would allow women who have abortions to be charged with first-degree murder. The bill, should it pass, would almost certainly spark a lawsuit — something Foreman encourages.

“My constituents want to see action on abortion,” he said. “It’s really their No. 1 issue. If Roe vs. Wade gets overturned, it will be because at the state level we turn the heat up and the Supreme Court says it’s a state issue. When that happens, I’d like to see the people of Idaho have a chance to vote (on the legality of abortion). They’ve never had that opportunity.”

“I’m a firm believer in law and order,” said Foreman, who served 30 years with the U.S. Air Force and 11 years with Moscow Police Department.

Idaho doesn’t have any sanctuary cities at this point, but Foreman wants to “head them off at the pass.” His proposal would allow the state attorney general or State Board of Education to impose penalties or pull funding from jurisdictions that adopt such policies.

“People shouldn’t be able to cherry-pick which laws they follow,” Foreman said.

The 5th District includes Latah and Benewah counties. It has proven to be a difficult seat for incumbents to hold, with several losing reelection bids since 2010.

Nelson was initially inspired to run for office by watching his father, who served as Latah County commissioner in the 1980s. He’s running for reelection to continue his efforts to improve rural transportation funding, behavioral health services and education.

For example, Nelson serves on the Senate Transportation Committee and was able to work with committee members last session to secure more funding for rural bridge repairs.

“In Benewah County, there are several roads that are dangerous for big trucks,” he said. “They can’t get upgraded because the traffic counts are too low. But I think this coming session, there’s an opportunity to chart a new course (on transportation funding).”

He also serves on the newly formed Idaho Behavioral Health Council, which tries to coordinate efforts among all three branches of state government to address the behavioral health needs of Idaho citizens.

“We’re coming up with a new strategic plan for how the state can deal with mental health issues,” Nelson said. “I think we can do a lot to help people, as well as to help law enforcement and the court system.”

Education is another top concern for him — so much so that he may seek an appointment to the Senate Education Committee next session, if he’s reelected.

“I’m not an education expert, but with my business experience I know how to manage systems without micromanaging people,” Nelson said. “And education really is such a core mission for the state. Too many Idahoans enter the workforce as low-income earners. Education is the pathway out of that.”

Not surprisingly, the two candidates differ substantially regarding Gov. Brad Little’s handling of the coronavirus pandemic.

Nelson has been “pretty pleased” with the governor’s response, noting that he’s followed the recommendations of health experts. And while he agrees state laws regarding emergency declarations may need to be updated, he’d hopes the Republican majority can do that without playing politics.

“We need to be thoughtful about it,” he said.

Foreman, by contrast, thinks the governor was “dead wrong” when he restricted church services and certain business operations at the start of the pandemic.

“I think he overreacted,” Foreman said. “The virus is real, but I think the reaction locally and nationally went from overreaction to now a hoax. There’s enough data to show it isn’t deadly to anyone, in any age group, unless they have preexisting conditions. Those people should take precautions and the rest of us should be allowed to get on with life.”

He criticized the Senate for not taking a stronger stand on the issue during the recent three-day special session, similar to the House’s demand that the emergency declaration end.

“I think — and you can quote me on this — I think the Senate is in the tank for the executive,” Foreman said. “The House did their job. The Senate didn’t just punt, they didn’t even show up to the stadium. That’s shameful.”

If elected, Foreman said he intends to be a “squeaky wheel” who reminds senators that they work for the people of Idaho, not for the governor.

“I intend to be very vocal,” he said.

Nelson said he wants to build on the relationships he’s already established in the Statehouse to get things done for the 5th District.

“We need good roads to get kids to school and to bring product to market,” he said. “And we need a good education system. It’s a fundamental duty of state government to make sure we have an educated citizenry, and we need higher education so there are opportunities for our kids to get higher-paying jobs and so the state can grow its economy.”

Previous or current elected positions: Served one term in the Senate before losing his reelection bid in 2018; previously ran for Latah County sheriff

Occupation: Recently started a new business with his daughter offering e-commerce software; previously co-owned a company that sold energy management software, which was acquired by Yokogawa Electric in 2016.