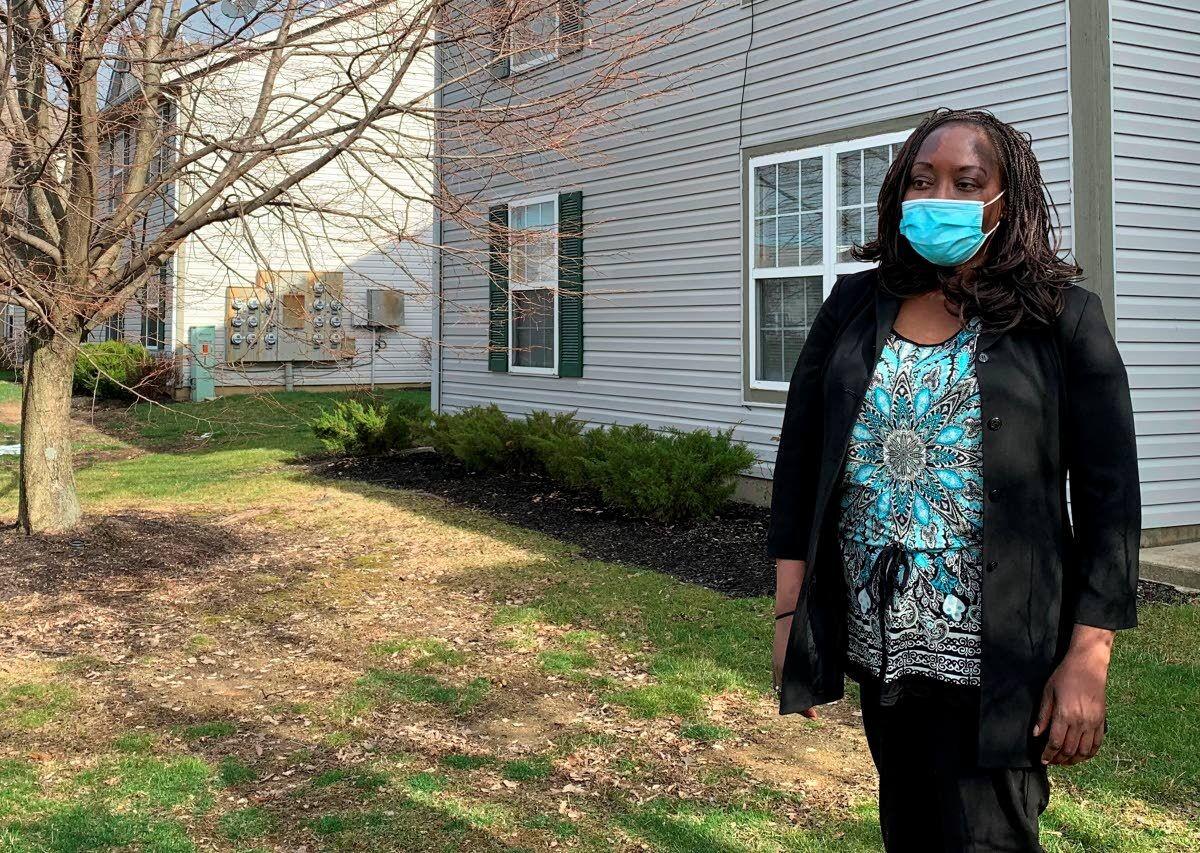 Agnes Makokha, 45, of Columbus, Ohio, stands outside her apartment Friday, December 4, 2020. Makokha is among millions of Americans at risk of losing unemployment benefits come Dec. 26. She lost her job in December and due to hiring freezes in place since the pandemic began, has been unable to find employment. (AP Photo/Farnoush Amiri) 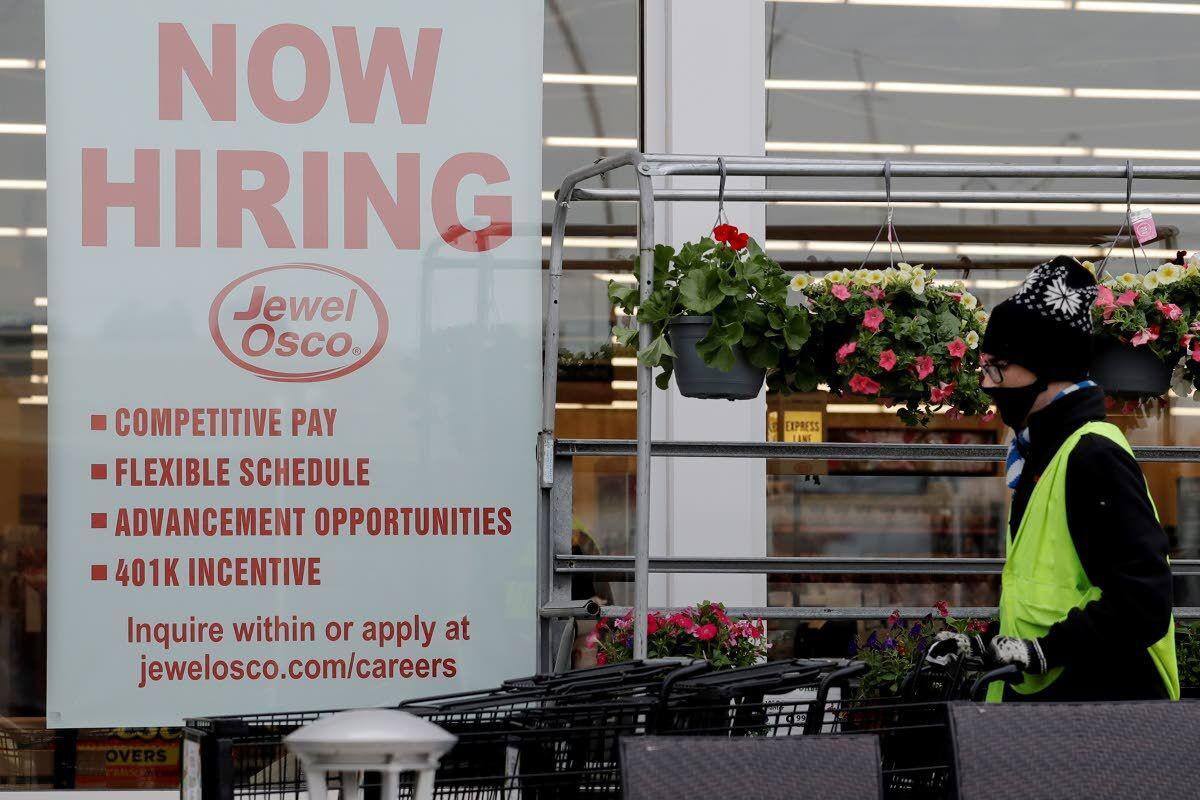 A man pushes carts as a hiring sign shows at a Jewel Osco grocery store in Deerfield, Ill., Thursday, April 23, 2020. Friday, Dec. 4, monthly U.S. jobs report will help answer a key question hanging over the economy: Just how much damage is being caused by the resurgent coronavirus, the resulting restrictions on businesses and the reluctance of consumers to shop, travel and dine out? (AP Photo/Nam Y. Huh)

Agnes Makokha, 45, of Columbus, Ohio, stands outside her apartment Friday, December 4, 2020. Makokha is among millions of Americans at risk of losing unemployment benefits come Dec. 26. She lost her job in December and due to hiring freezes in place since the pandemic began, has been unable to find employment. (AP Photo/Farnoush Amiri)

A man pushes carts as a hiring sign shows at a Jewel Osco grocery store in Deerfield, Ill., Thursday, April 23, 2020. Friday, Dec. 4, monthly U.S. jobs report will help answer a key question hanging over the economy: Just how much damage is being caused by the resurgent coronavirus, the resulting restrictions on businesses and the reluctance of consumers to shop, travel and dine out? (AP Photo/Nam Y. Huh)

WASHINGTON — With the viral pandemic accelerating across the country, America’s employers sharply scaled back their hiring last month, adding 245,000 jobs, the fewest since April and the fifth straight monthly slowdown.

At the same time, the unemployment rate fell to a still-high 6.7 percent, from 6.9 percent in October as many people stopped looking for work and were no longer counted as unemployed, the Labor Department said. November’s job gain was down drastically from a 610,000 gain in October.

Friday’s report provided the latest evidence that the job market and economy are faltering in the face of a virus that has been shattering daily records for confirmed infections. Economic activity is likely to slow further with health officials warning against all but essential travel and states and cities limiting gatherings, restricting restaurant dining and reducing the hours and capacity of bars, stores and other businesses.

Most experts say the economy and job market won’t be able to fully recover until the virus can be controlled with an effective and widely used vaccine. And the picture could worsen before it improves.

“The recovery is not insulated from the effects of the pandemic,” said Daniel Zhao, senior economist at employment website Glassdoor. “This is the calm before the storm. We face a long and difficult winter ahead.”

The jobs slowdown comes at a particularly fraught time. Two enhanced federal unemployment benefit programs are set to expire at the end of this month — just as viral cases are surging and colder weather is shutting down outdoor dining and many public events. Unless Congress enacts another rescue aid package, more than 9 million unemployed people will be left without any jobless aid, state or federal, beginning after Christmas.

Renewed efforts in Congress to reach a deal have picked up momentum. A bipartisan group of senators has proposed a $900 billion plan that would include expanded unemployment benefits, more small business loans and aid to state and local governments. President Donald Trump has voiced support for more financial assistance, though key differences between the two sides remain.

Speaking at a news conference Friday in Wilmington, Del., President-elect Joe Biden said the jobs report was “grim” and “shows an economy that is stalling.” Biden urged Congress to act quickly to approve another rescue aid package.

Before the pandemic, last month’s job gain would have been considered healthy. But the U.S. economy is still nearly 10 million jobs below its pre-pandemic level, with a rising proportion of the unemployed describing their jobs as gone for good. Faster hiring is needed to ensure that people who were laid off during this spring can quickly get back to work.

There is also evidence that the pandemic is inflicting long-term damage on millions of workers. People who have been out of work for six months or more — one definition of long-term unemployment — now make up nearly 40 percent of the jobless, the highest such proportion in nearly seven years. The long-term unemployed typically face a harder time finding new jobs.

And the proportion of Americans who are either working or seeking work fell in November, suggesting that many people soured on their prospects for finding a job and stopped looking. That proportion declined to 61.5 percent, a level that before the pandemic hadn’t been seen since the 1970s.

In Columbus, Ohio, Agnes Makokha is unemployed and receiving jobless benefits for the first time in her life. Makokha, 45, lost her job as a human resources administrator nearly a year ago, well before the pandemic struck. Yet since the virus intensified, it’s become much harder for her to find work.

Makokha doesn’t have a car. And in April, bus service on her route was temporarily canceled. She struggled to buy groceries, much less look for work. Since then, Makokha has been scraping by with the help of food pantries and unemployment benefits. But those benefits are set to run out Dec. 26.

“I am a little bit scared now about the help coming to an end because I’m not quite sure what’s going to happen,” Makokha said. “If McDonald’s will hire me, I will take that job. If anyone will hire me, I would take the job.”

The consequences of the slowdown aren’t falling evenly on all Americans. Low-wage industries, like restaurants and bars and retail stores, actually cut jobs last month. And many mothers have been forced to stop working to take care of children that are in school online.

Friday’s jobs report also reflects how the coronavirus has transformed the holiday shopping season. Transportation and warehousing firms added 145,000 jobs in November, more than half the total job gain for the month. That trend reflected rapid hiring by shipping and logistics firms that are benefiting from the surge in online purchases by consumers shopping at home. That was the biggest monthly job gain for that industry on records dating back to 1972.

Becky Frankiewicz, president of the temporary staffing firm Manpower Group’s North American division, said that roughly 20 percent of the online job postings in November that her firm tracks were related to warehousing and logistics. Manpower’s clients were still interested in hiring last month. But the worsening virus and the uncertainty it brings have made them more cautious.

Frankiewicz summarized their views as: “We are seeing increased demand, we know we have to hire but... are they going to shut us down again?”

The impact of the pandemic last month was particularly visible in an employment category that includes hotels and entertainment industries such as casinos and movie theaters. This group added just 31,000 jobs in November. That’s only about one-tenth of the gains of the previous two months and suggests that the virus spread, new business restrictions and colder weather are forcing many businesses to closer their doors or limit hours.

U.S. deaths from the coronavirus topped 2,800 Thursday, a new high, with more than 100,000 Americans hospitalized with the disease, also a record, and new daily cases topping 200,000. In response, at least 12 states have imposed new restrictions on businesses in the past month, according to an Associated Press tally.

Jon Tigges, who owns a bed-and-breakfast and wedding venue near Leesburg, Va., has lost about two-thirds of his normal wedding events this year, dealing a sharp blow to his bottom line. Out of about 35 part-time workers Tigges had employed before the pandemic, just a handful are likely to work on any given weekend.

“We’re hoping there will be another relief bill — I need another loan to bridge the winter months,” he said. “It’s going to take me 10 years to dig out of the hole that I’m in.”