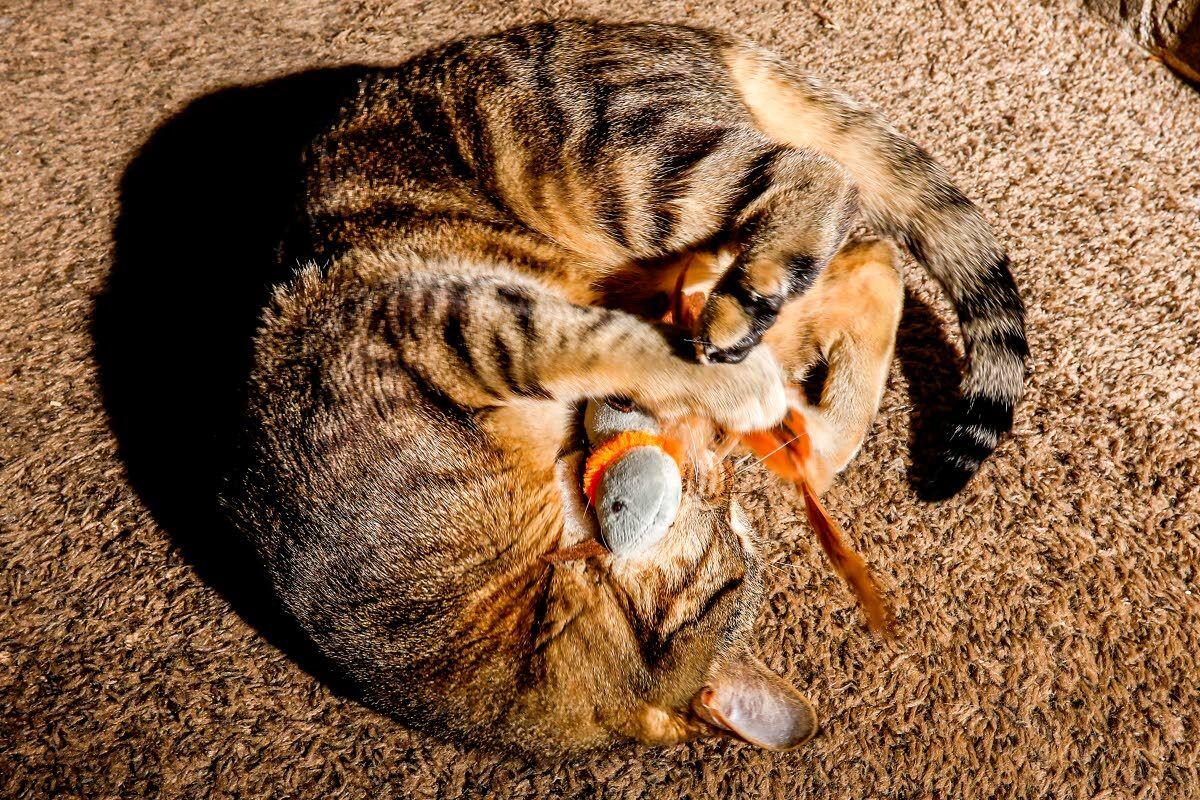 Kayo tears into her bird toy while staying active indoors. Keeping cats stimulated indoors is one of the best tactics to ensure they don’t hunt birds. 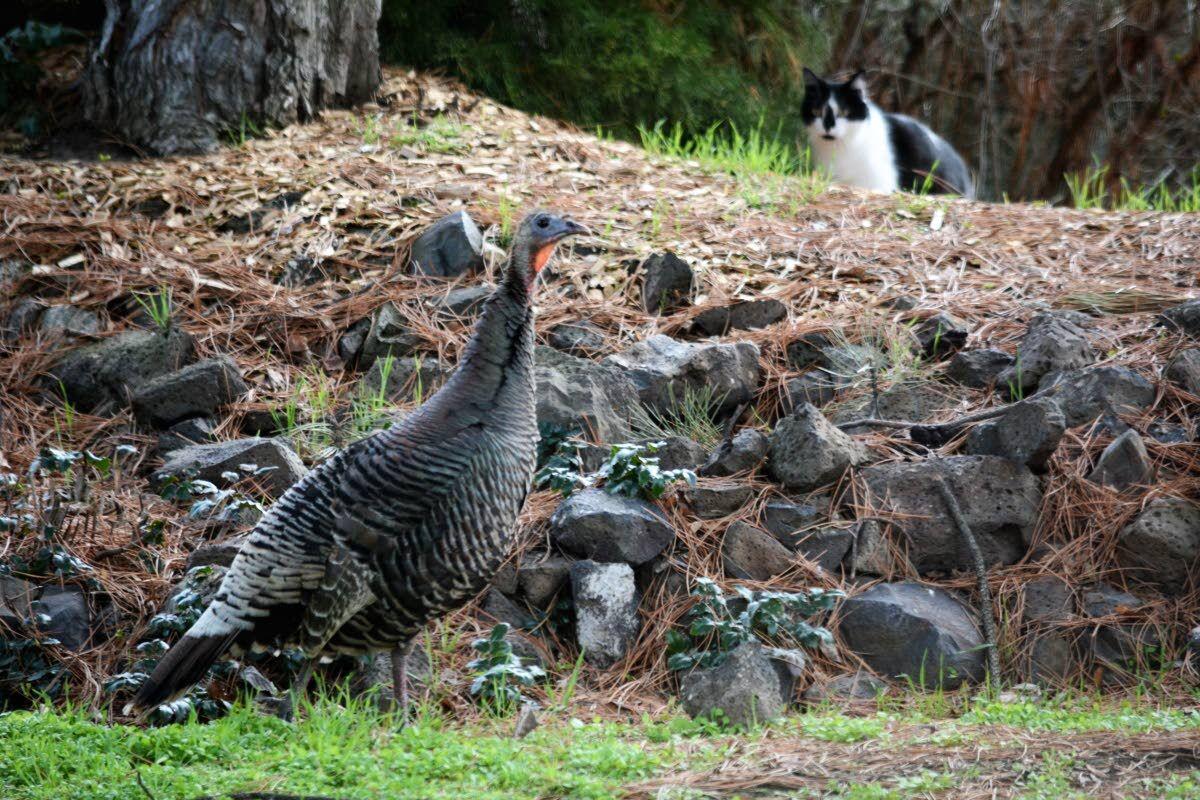 Poppy the cat keeps a close eye on a turkey in a Lewiston backyard. Smaller birds are easy prey for cats. 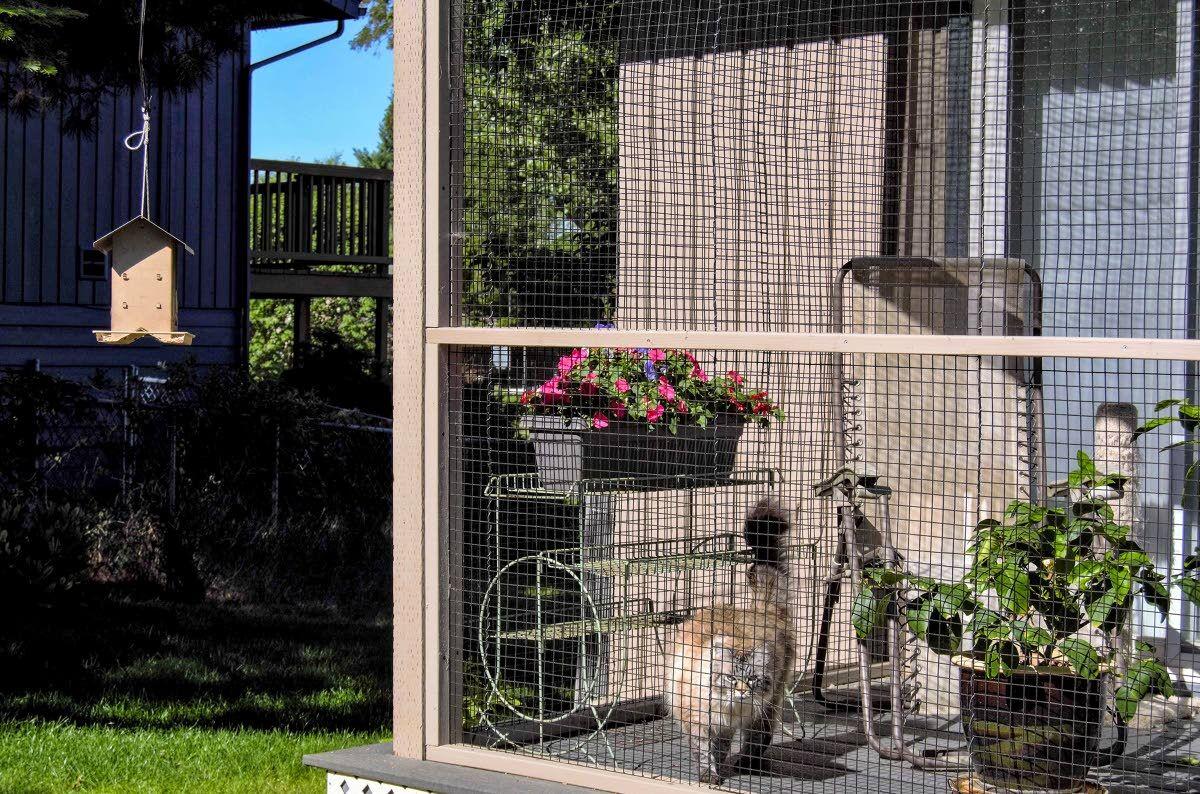 Enclosed patios, sometimes referred to as “catios,” allow cats to enjoy fresh air and some “outside” time without putting backyard birds at risk.

Kayo tears into her bird toy while staying active indoors. Keeping cats stimulated indoors is one of the best tactics to ensure they don’t hunt birds.

Poppy the cat keeps a close eye on a turkey in a Lewiston backyard. Smaller birds are easy prey for cats.

Enclosed patios, sometimes referred to as “catios,” allow cats to enjoy fresh air and some “outside” time without putting backyard birds at risk.

As their beloved pet sits curled up, purring on their lap, it may be easy for cat owners to forget that underneath that fuzzy, cuddly and cute exterior beats the heart of a cold-blooded killer.

The powerful predatory instinct born inside every cat can’t just be turned off, domesticated or not. That means feral cats that live outdoors or pet cats that are allowed out of the house will continue to hunt whether they need the food or not. In some cases, such as rodent control, that can be a good thing.

But University of Idaho avian ecologist Tracey Johnson said outdoor cats have a devastating impact on wild bird populations. Numbers are hard to pin down, but the latest estimates put birds lost to cat predation at 1.3 billion to 4 billion each year in North America alone.

“That’s billion, with a ‘b,’ ” Johnson said, pausing to let the impact of the number sink in. “It’s definitely considered one of the leading reasons for human-caused mortality for birds.”

The pet industry markets all kinds of products for cat owners to keep their beloved felines from killing birds, from bells and brightly colored collars to devices that prevent them from climbing trees. But studies show the benefits of those products can be negligible at best, and dubious at worst. So Johnson said the only truly foolproof way to prevent bird predation is to keep cats indoors.

“That’s 100 percent effective, and it’s better for the cat, too,” she said. “If you really care about your cat, it’s going to live a longer, healthier life if it’s indoors. Outdoors, they fight with other cats and pick up diseases, they get depredated by wildlife like raptors and coyotes that come into neighborhoods, they get hit by cars, they’re at risk from mean people that don’t like cats. So it’s a much better life for a cat, and a longer life filled with less injury and sickness, if it just spends its time inside.”

There are some methods that allow pet cats to safely interface with the outdoors. Leashes and harnesses have been developed specifically for cats so owners can take them on a stroll. There are multiple resources online regarding how to train a cat to walk on a leash, including YouTube tutorial videos.

Another approach is a dedicated, enclosed outdoor space that connects to a residence, sometimes referred to as a “catio.” Kits can be purchased from some pet stores or online suppliers, or do-it-yourselfers can find directions on many websites.

But one of the most important aspects of restricting an active cat to the indoors is providing a stimulating environment that can satiate its irresistible instinct to hunt. Providing lots of toys is crucial, especially those that mimic prey. Some of those toys are animated, providing an even more realistic experience.

The pet industry has also developed “food puzzles,” toys that make cats work to access their food or treats. Such devices have been used for years to help wild jungle cats make the transition to captivity, according to the Journal of Feline Medicine and Surgery.

The website birdlife.org recommends making the transition from outdoor cat to indoor cat gradually by restricting the animal to slightly longer indoor periods each day. Timing the transition to begin with the onset of winter can make it easier, since cats naturally prefer warm, dry places.

“A very common scenario is someone feeding birds at their feeder, and even though it’s not intended, there is a lot of bird food that falls on the ground,” she said. “And if you’ve got some cover in your backyard, then cats can hide and stalk the feeder.”

Birds like juncos, sparrows, finches and chickadees that spend a lot of time on the ground are particularly susceptible, she added. An easy way to help remedy the situation is to place feeders away from cover so birds can see a cat coming.

Those who would like to learn more about how to avoid cat-bird predation have a number of resources they can tap. Johnson recommended the U.S. Fish and Wildlife Service, the Audubon Society and the American Bird Conservancy as reliable sources of good information.