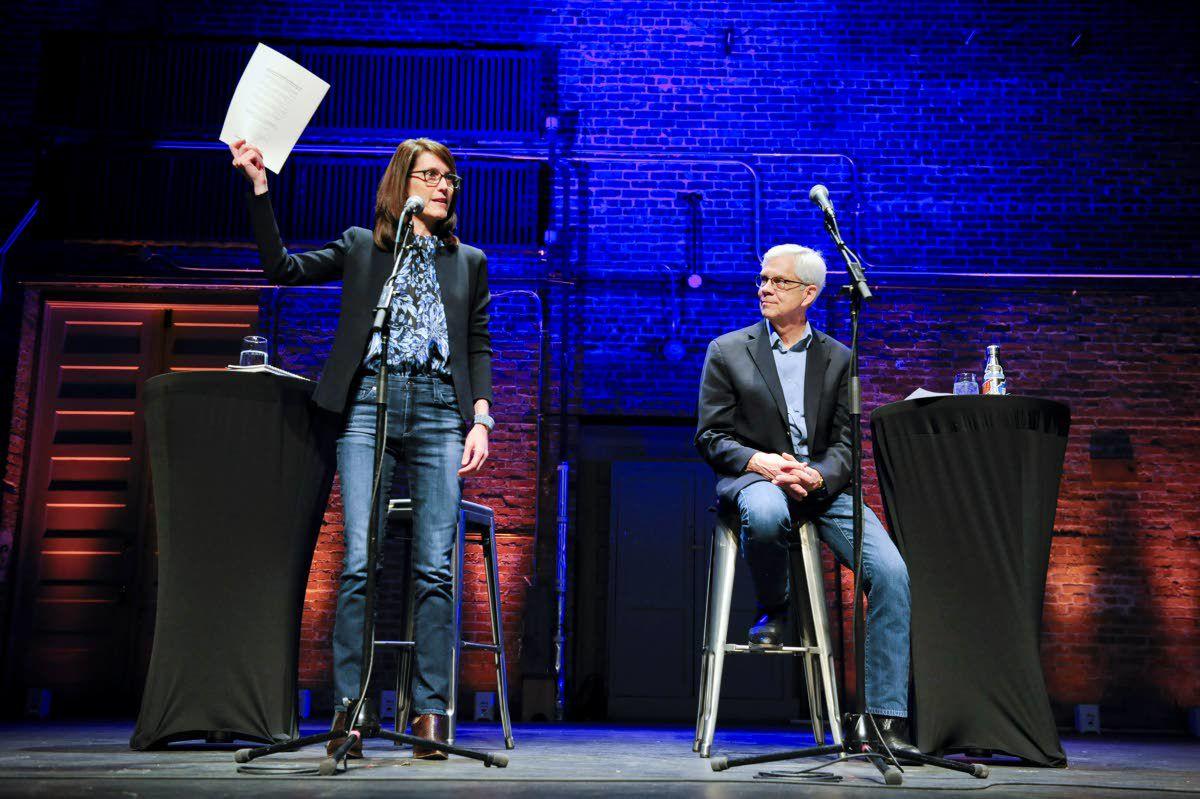 The Democratic candidates for Montana governor, Whitney Williams and Mike Cooney, debate Feb. 21 at the Emerson Center for Arts and Culture in Bozeman, Mont. The pair will face each other in the June 2 primary election. 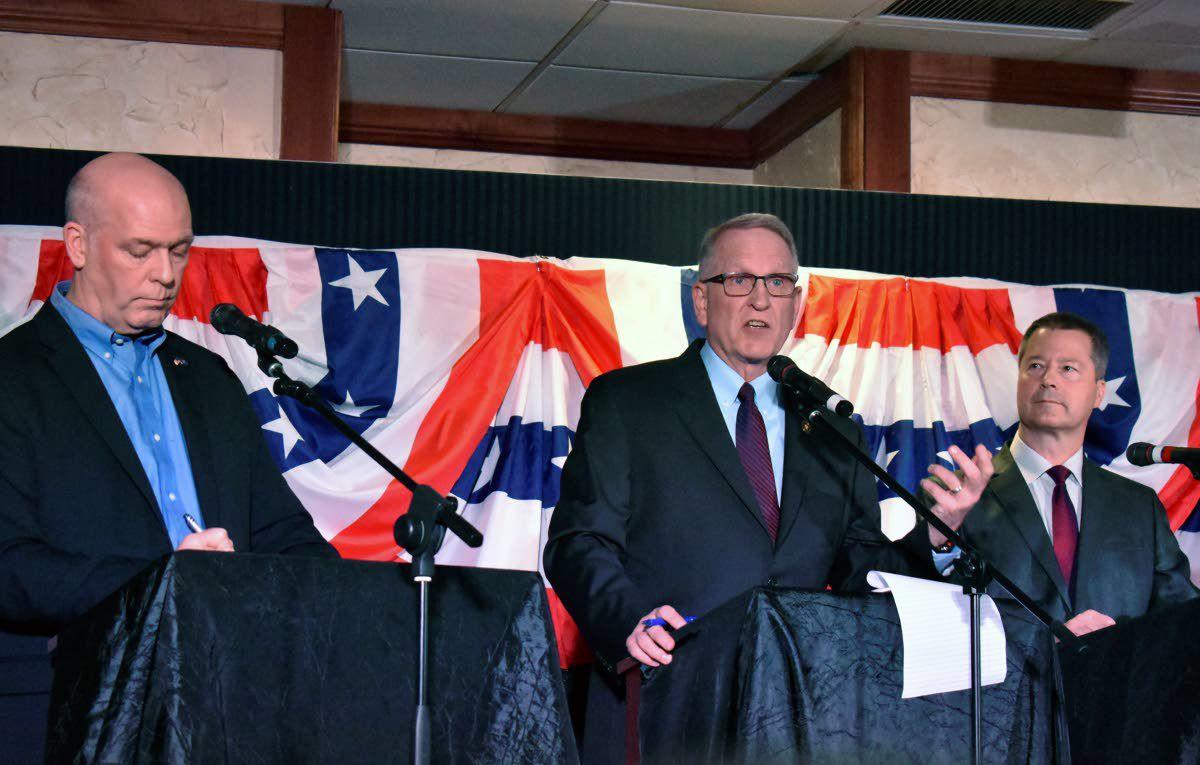 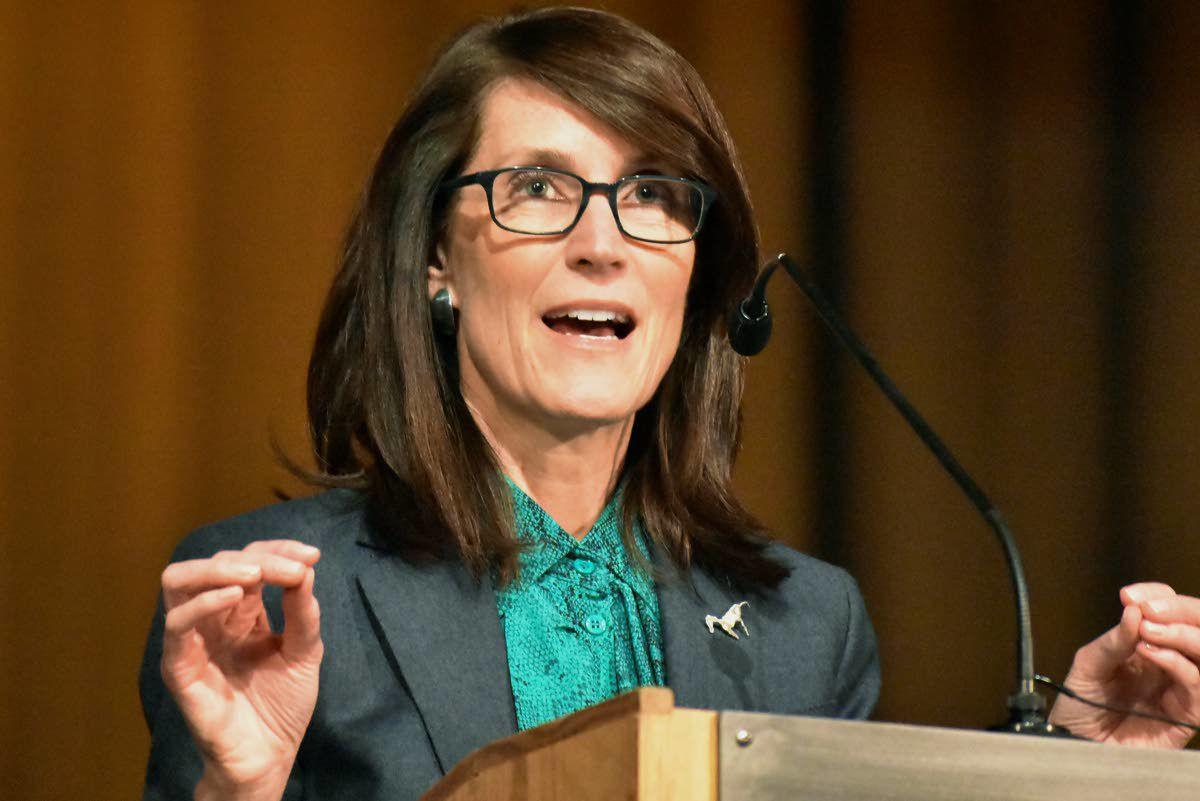 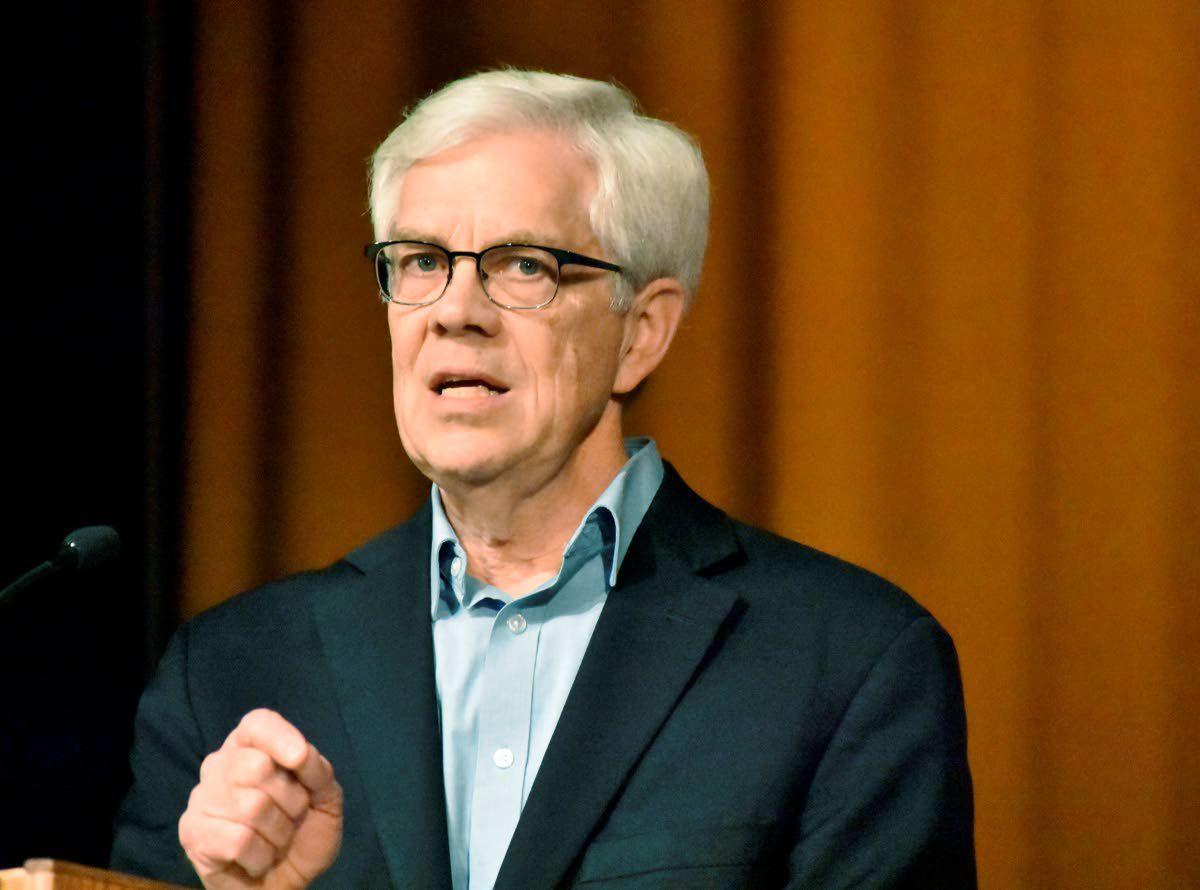 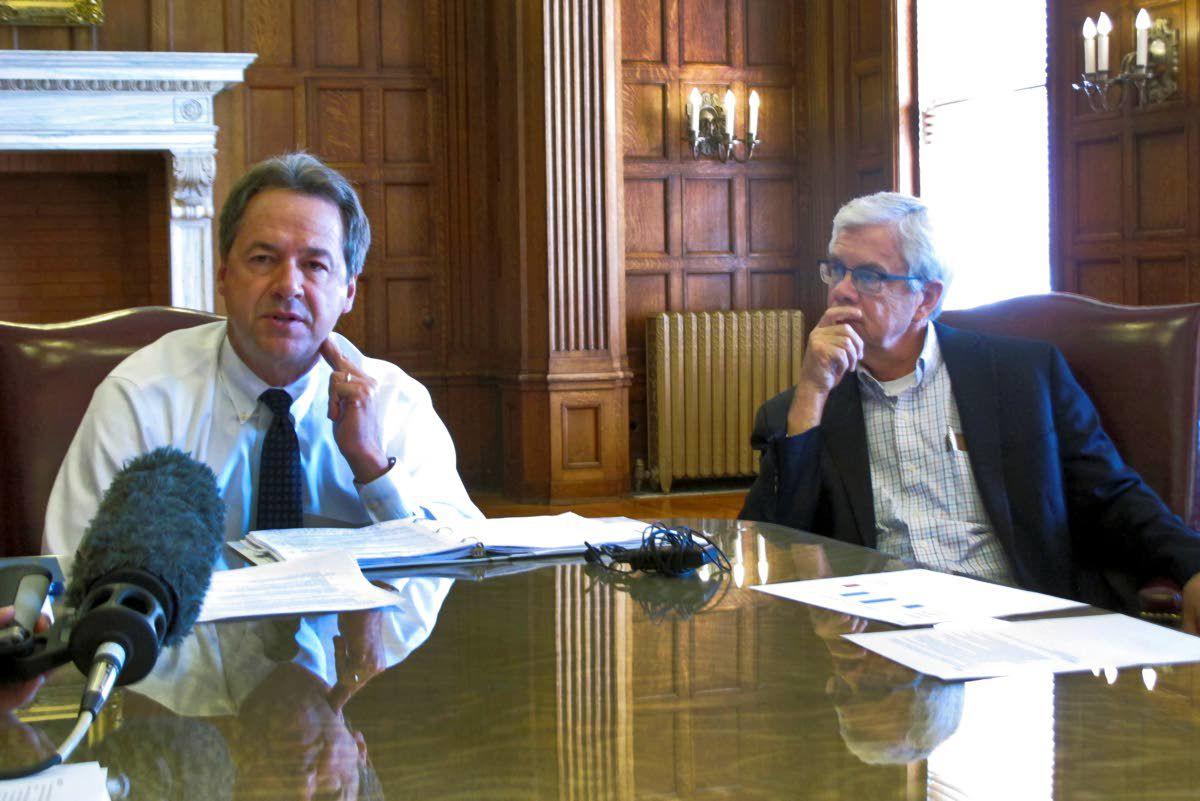 FILE - In this July 25, 2018 file photo, Montana Gov. Steve Bullock, left, talks about restoring some state budget cuts as Lt. Gov. Mike Cooney looks on in Helena, Mont. The battle against the coronavirus is giving Cooney an unexpected boost as he faces a well-financed opponent with extensive political connections in the June 2, 2020 Democratic primary for governor. (AP Photo/Matt Volz, File) 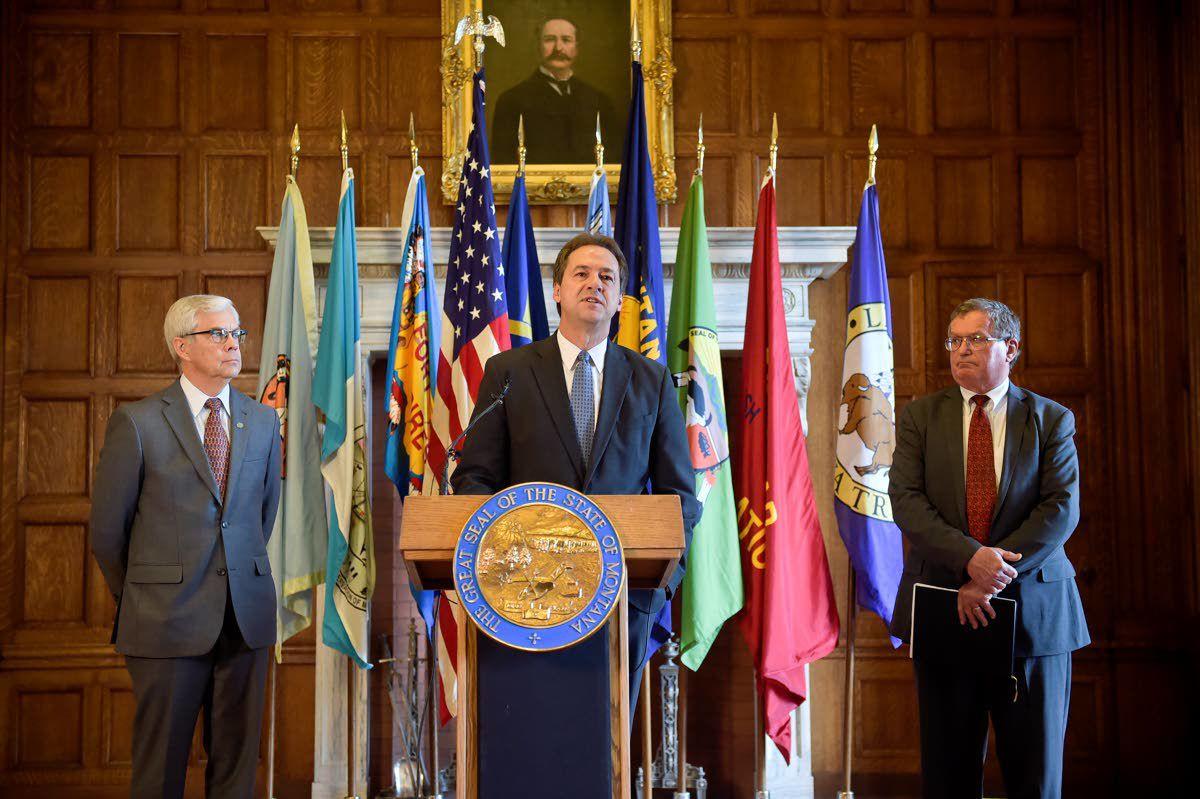 The Democratic candidates for Montana governor, Whitney Williams and Mike Cooney, debate Feb. 21 at the Emerson Center for Arts and Culture in Bozeman, Mont. The pair will face each other in the June 2 primary election.

FILE - In this July 25, 2018 file photo, Montana Gov. Steve Bullock, left, talks about restoring some state budget cuts as Lt. Gov. Mike Cooney looks on in Helena, Mont. The battle against the coronavirus is giving Cooney an unexpected boost as he faces a well-financed opponent with extensive political connections in the June 2, 2020 Democratic primary for governor. (AP Photo/Matt Volz, File)

BILLINGS, Mont. — The battle against the coronavirus is helping shape the race for Montana governor and giving Lt. Gov. Mike Cooney an unexpected boost as he faces a well-financed Democratic primary opponent with an extensive political network in Whitney Williams.

“With this coronavirus turning the campaign upside down, there is not one single candidate that understands what’s the best way to campaign in this environment. Nobody,” Olszewski said.

Williams, a 49-year-old Missoula businesswoman, is a first-time candidate with backing from some major Democratic leaders and organizations. That includes a $700,000 advertisement campaign launched this week by Emily’s List, a group that supports female candidates and has a Montana offshoot named after Williams mother, former state Sen. Carol Williams.

But with political campaigns grounded the past two months, analysts said Cooney has caught some shine from the spotlight on the administration of Gov. Steve Bullock as it addresses the outbreak. So far there have been only 16 deaths in the state.

The different effects from the virus on the two campaigns reflects a reality for candidates across the political spectrum: The crisis affects everyone, and how it plays out could help determine winners and losers.

Cooney said his participation in the virus response has underscored how a four-decade career in government prepared him to lead Montana as the state faces revenue declines and a continuing health threat.

“I can hit the ground running without skipping a beat,” he said.

She’s rolled out a string of high-profile endorsements, including two-term Montana Gov. Brian Schweitzer, and the support of Clinton. But she has no political record herself. Cooney, 65, was elected to the state Legislature in 1976 at the age of 22, served three terms as secretary of state and a term as state Senate president. His grandfather, Frank Cooney, was governor in the 1930s.

“I don’t have the name recognition that Mike does. That’s certainly made me the underdog,” Williams said. “The way we made up for that is continuing every day, even with COVID, to show up. You get online, you organize online.”

On the Republican side, the pandemic has hobbled Fox’s preferred method of campaigning — driving long miles to shake hands, talk to voters and cultivate their support. Gianforte, meanwhile, has been able to tap into his personal riches and donors to maintain an advertising presence on the airwaves. His campaign disclosed another $500,000 personal loan on Thursday, bringing Gianforte’s total spending on the race so far to $1.5 million.

Olszewski has less cash, and he’s tried to make up for fewer rallies and the difficulties of making in-person appearances by doing more social media.

Bullock, who backs Cooney, must leave the governor’s office because of term limits. He made an early bid for the Democratic presidential nomination and is now running for U.S. Senate against Republican incumbent Steve Daines.

Bullock’s handling of the crisis so far has been viewed favorably: Montana’s per-capita death rate is among the lowest in the nation and the number of new infections dropped off sharply following a string of closure orders Bullock issued in late March.

It’s also blunted one of Williams’ main point of attacks: that the Bullock administration was at times ineffective and unable to overcome a Republican-majority Legislature to achieve Democratic priorities. Those included publicly-funded preschool and avoiding social program cutbacks to address a budget shortfall.

Cooney has been a silent if regular presence at Bullock’s news conferences, standing just behind the governor as restrictions have been announced and then eased in recent weeks. He said he’s more vocal behind the scenes, conferring with the governor and his aides frequently and acting as one of the administration’s liaisons to coordinate their actions with officials across the state.

“I’m happy to be a part of it and happy he (Bullock) wants me there because he does consider my assistance beneficial,” Cooney said.

Even before Bullock’s coronavirus news conferences took center stage, Williams was in the awkward position of opposing the administration — she calls it the “Cooney administration” — as she sought to sway the same voters who elected Bullock attorney general in 2008, then two terms as governor.

She’s criticized the administration over its approval of a copper mine near a tributary of the Smith River and for allowing schools to re-open this month if they chose, though the pandemic is unresolved.

Williams said her connections and private-sector experience running a consulting firm for businesses and philanthropies, including those involved in disaster response, make her well-suited to guide Montana out of the economic downturn triggered by the pandemic.

“Especially when you have a moment like COVID, people are really looking for new leadership and something that looks different,” she said.