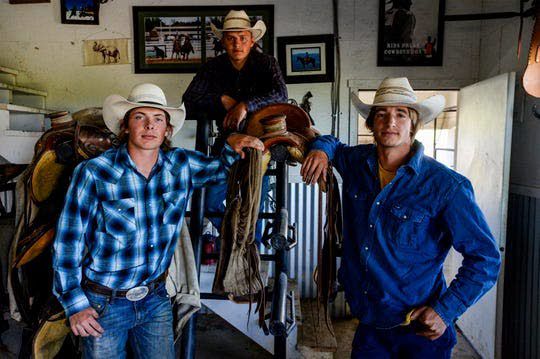 From left: Keagan Stroop, Troy Hennes and Harry Green, friends from their high school days at Belt High, gather June 24 at Green’s family home outside of Belt, Mont., to prepare for a 45-day, 500-mile horseback trip through Montana’s backcountry to raise money for cancer care and research. 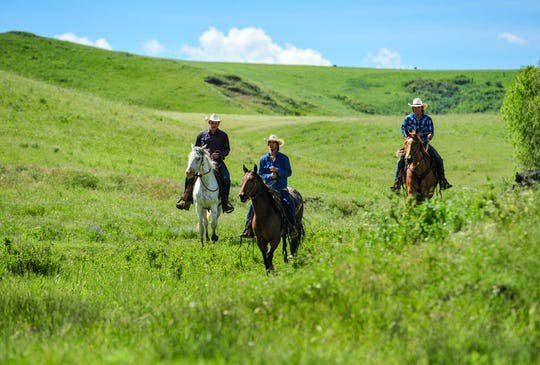 Troy Hennes, left, Harry Green, center, and Keagan Stroop, right, ride their horses as they prepare for a horseback trip through Montana's backcountry to raise money for cancer care and research.

From left: Keagan Stroop, Troy Hennes and Harry Green, friends from their high school days at Belt High, gather June 24 at Green’s family home outside of Belt, Mont., to prepare for a 45-day, 500-mile horseback trip through Montana’s backcountry to raise money for cancer care and research.

Troy Hennes, left, Harry Green, center, and Keagan Stroop, right, ride their horses as they prepare for a horseback trip through Montana's backcountry to raise money for cancer care and research.

GREAT FALLS, Mont. — Three Montana buddies decided to turn a fun trip into the state’s backcountry into a cause, raising money for research on cancer, which has claimed the lives of friends and family members they loved.

Harry Green, 21, and Keagan Stroop and Troy Hennes, both 20, were on the Belt basketball and football teams.

Now they’re teaming up for a different kind of challenge, a 45-day, 500-mile pack trip through some of Montana’s wildest wildlands, entirely on horseback.

“It’s going to be a journey for sure,” Green said Wednesday at his ranch outside of the northcentral Montana community of Belt, where the trio was making last-minute preparations for the epic ride across western Montana’s mountains, forests and wilderness.

The young cowboys planned to hitch up the horse trailers and drive to the launch point Thursday before officially beginning the horseback ride at Bannock Pass in the Beaverhead-Dearlodge National Forest near the Montana-Idaho border southwest of Dillon, at 8 a.m. Friday.

The six-week journey is scheduled to end Aug. 8, near the Montana border with Canada north of Whitefish.

It will take the riders, 12 horses and an Airedale terrier named Russell through the entire length of the Bob Marshall Wilderness.

Western Montana was chosen as the route because of its beauty and a large amount of public land making access easier.

Their goal is to raise at least $20,000, which will be donated to cancer treatment and research.

Benefis Sletten Cancer Institute in Great Falls and the Anna Schindler Foundation, which provides emotional and financial support to families fighting childhood cancer in the Northwest, are two of the organizations that will benefit.

They’ve already raised $5,500 through a GoFundMe site, and another $5,000 from a raffle, in which the first-place prize was a saddle, and selling T-shirts advertising the pack trip with the message, “Cancer is tough, Cowboys are tougher.”

“We couldn’t have done this without a whole big support system,” Green said.

Over the past few years, Green, Hennes and Stroop have broken twelve colts for the ride.

One of the horses that will make the trip is a mustang captured by the Bureau of Land Management during an annual roundup of wild horses on public lands.

On Wednesday, Green hopped on a four-wheeler and rounded up the grazing horses and drove them into a corral. The frisky bunch snorted and jostled for position at a water tank.

“We’re going to have a lot of fun,” Stroop says of the trip.

“And we like each other — for now,” Hennes added with a laugh.

Team members will be moving north most of the time, and they plan to ride horses the entire time. Construction along one six-mile stretch of highway may pose a problem. If possible, they’ll have flag trucks in front and behind them along that stretch so they can continue to ride. If not, they’ll walk the horses.

“We had to snake around a little bit,” Green said of developing the route.

The journey will take them through the Anaconda Pintler Wilderness and The Bob, which remains home to just about every kind of wild critter that ever roamed the West, including grizzly bears.

To keep the horses fresh, they’ll be rotated in and out during the trip, with six horses in use at a time.

At the end of the journey in August, a horse sale is planned at the King’s Arena in Great Falls, with the proceeds also benefiting the cause.

“In this little community, we’ve had several super dear people who were affected by cancer and died from cancer,” said Jay Green, Harry’s father and a Belt-area veterinarian who is assisting with logistical support.

Initially, Green was skeptical about how much money the boys could raise and the impact the trip could have in light of the millions needed for research and care. In light of the strong response generated by the gesture behind the trip, he’s had to rethink that notion.

“In a way, I think the psychological aspect is bigger than the monetary amount,” Jay Green said.

Besides having fun and raising money for cancer, Hennes, Stroop and Green will be riding in honor of those who have lost their lives and of those who are battling the disease today.

For Hennes, that’s his brother, Tyler, who died in 2014 from osteosarcoma, a type of bone cancer. Tyler, who was diagnosed when he was 13, was 18 when he died.

Troy Hennes provided the motto for the trip: “Ride Out the Grief, Ride Out the Pain, Ride for Hope.”

Stroop is riding for a great grandfather, Ed Elam, who died of skin cancer, and family friend Maida Sorkness, who died in 2019 of stomach cancer.

Green, Stroop and Hennes all graduated from high school in Belt, a community of 600 22 miles southeast of Great Falls, where they competed together in basketball, football and track.

Initially, Green and Stroop discussed taking a trip for fun. With the death of a community member from cancer fresh in their minds, the talk turned to turning the trip into a cause, which Hennes soon joined.

They’re calling the trip “Ride it Out — Montana Against Cancer.”

Green is studying premed at Carroll College in Helena. He hopes to become an oncologist diagnosing and treating people who have cancer.