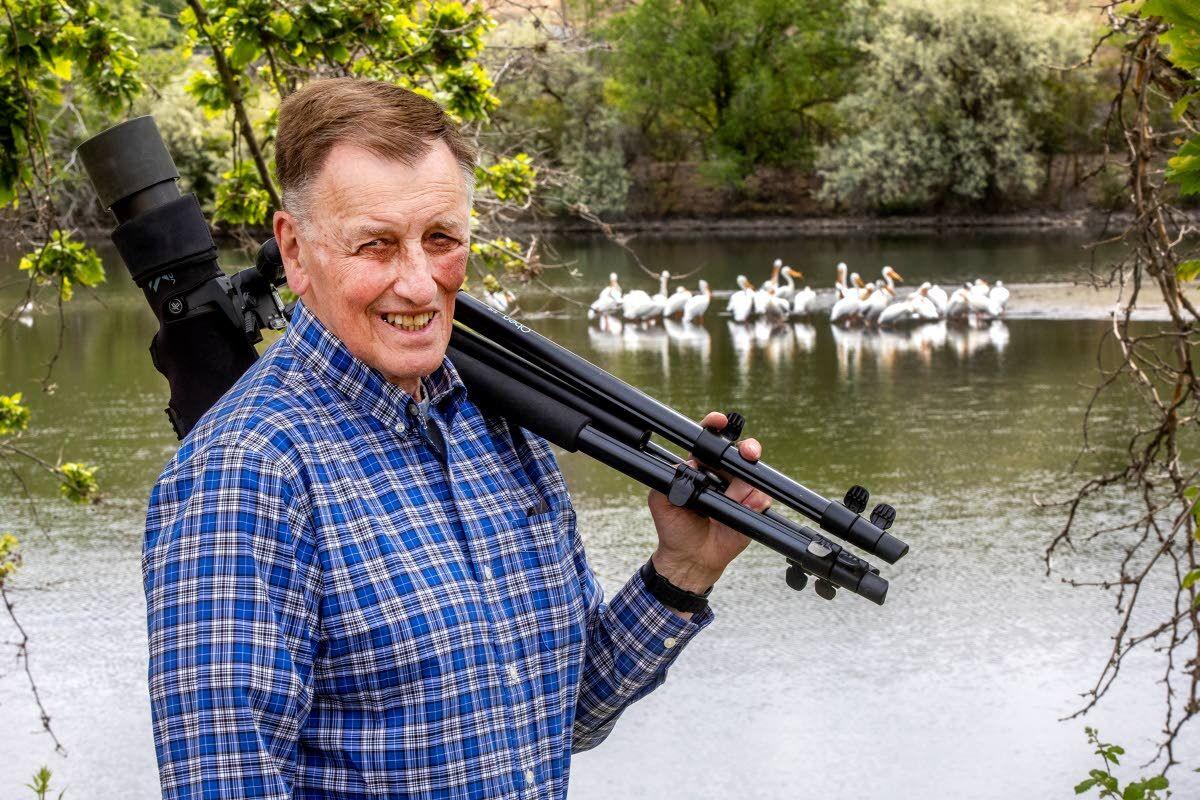 Keith Carlson poses with his scope for spotting birds in front of the pelicans at Swallows Park in Clarkston. Carlson is president of the local birding group the Canyon Birders. 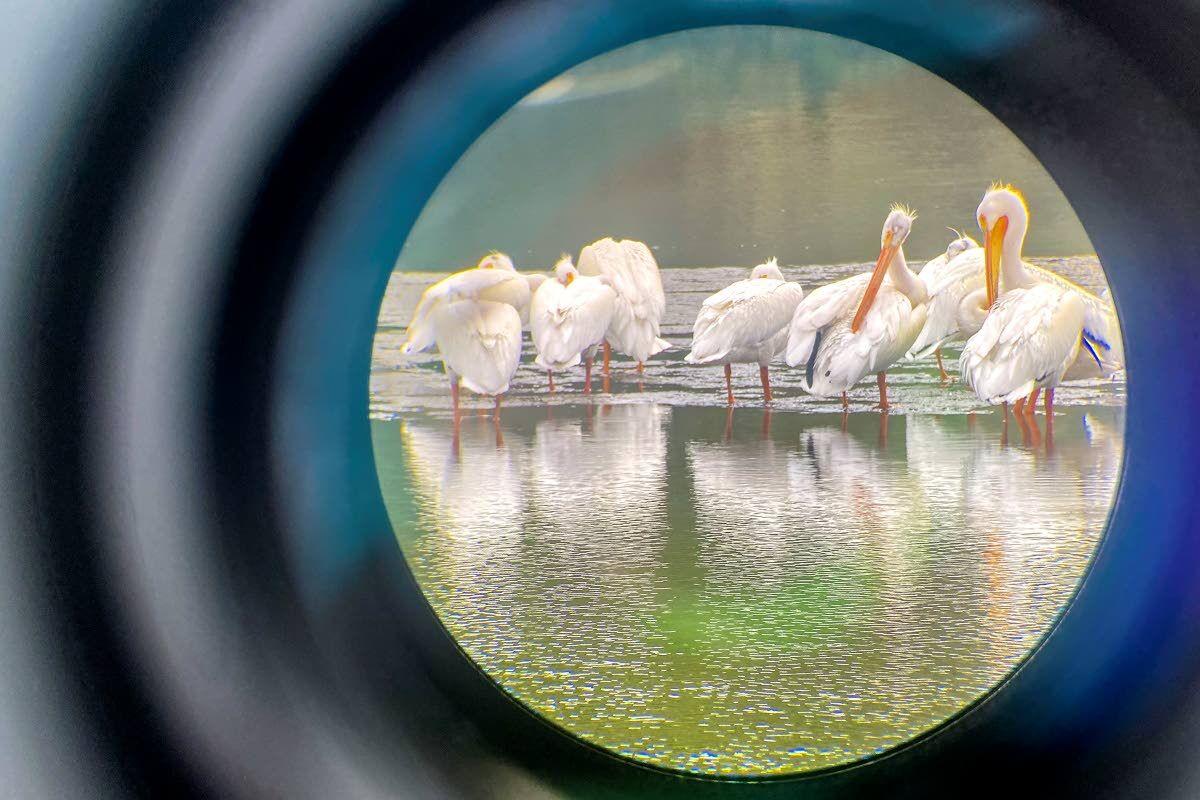 Pelicans are seen through Keith Carlson’s scope at Swallows Park in Clarkston. 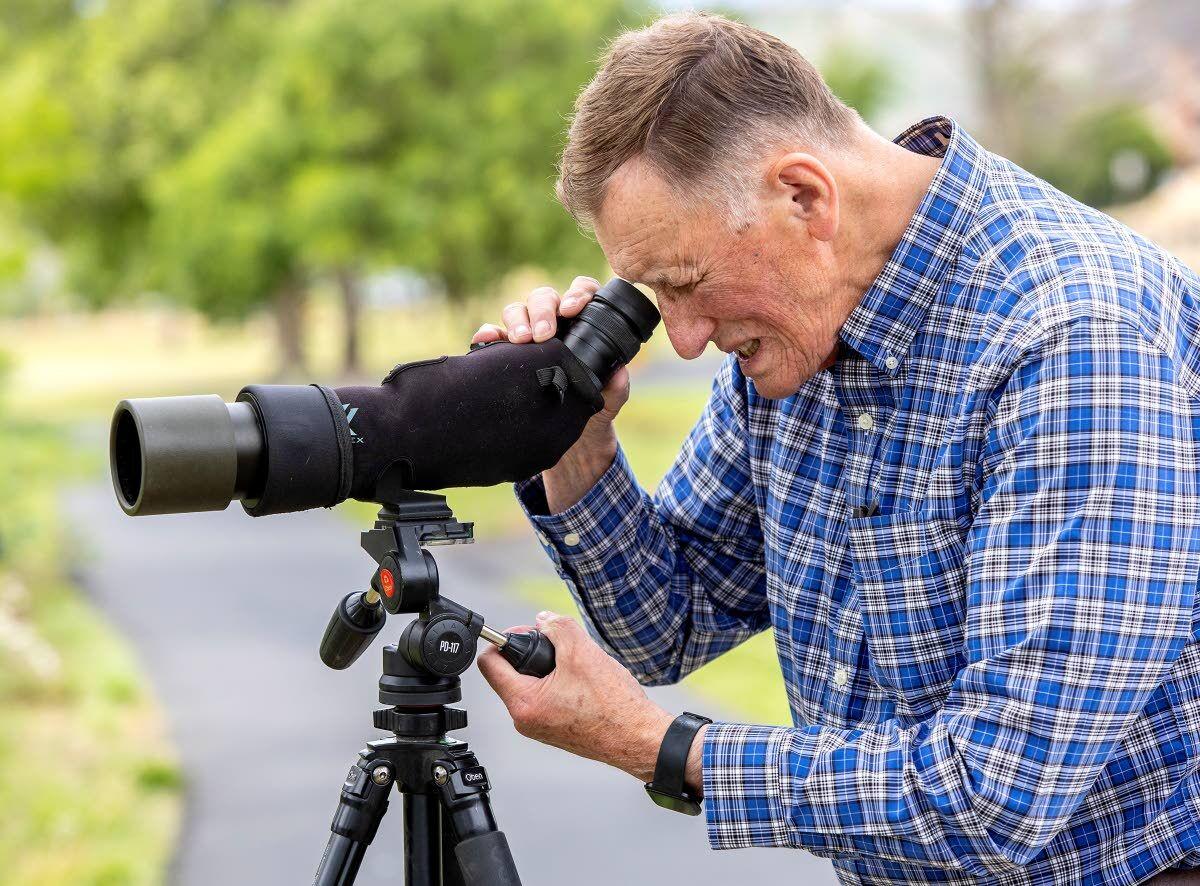 Carlson trains his scope on some pelicans at Clarkston’s Swallows Park. The large birds are a draw for both new and experienced birders.

Keith Carlson poses with his scope for spotting birds in front of the pelicans at Swallows Park in Clarkston. Carlson is president of the local birding group the Canyon Birders.

Pelicans are seen through Keith Carlson’s scope at Swallows Park in Clarkston.

Carlson trains his scope on some pelicans at Clarkston’s Swallows Park. The large birds are a draw for both new and experienced birders.

As the old saying goes, “Birds of a feather flock together.”

That’s especially true of the Canyon Birders, who share a mutual interest in spotting birds throughout the region and making new friends along the way.

Lewiston resident Keith Carlson, 81, is chairman of the group, which gathers to take field trips and compare notes on the wide variety of birds in the Lewiston-Clarkston Valley and beyond.

“We’ve got two beautiful rivers here — not a lot of mud — and it’s a great place for birding,” Carlson said. “We go on field trips once or twice a month and only have one meeting a year. It’s a loose group, with 40 to 45 people on the mailing list, and it’s a friendly group.”

The Canyon Birders have been active since the 1970s, according to a historical newsletter written by the late Winifred Hepburn. The only original member that remains is Louise LaVoie, of Clarkston.

An ornithology class at Walla Walla Community College helped spark interest in the hobby. Shortly after a notice about the class was published in the Lewiston Tribune, the bird fans got together and formed a group. At the time, the cost to join was $3 a year to help pay for postage for the newsletters.

Over the years they’ve traveled as far as British Columbia and Manitoba, Canada, western Washington and Oregon, and made an impact in preserving wildlife areas. Hepburn credits the late Eleanor Pruitt for starting a campaign several decades ago that saved the Asotin Slough from becoming a motorcycle racetrack.

Pruitt spent hours calling people to write letters, attend community meetings and sign petitions to persuade the Army Corps of Engineers to preserve the bird habitat, just south of Asotin. As a result of the group’s efforts, 100 acres was designated as a wildlife area. Asotin schoolchildren built nesting boxes, and kids from the Northwest Children’s Home planted more than 2,100 plants.

Carlson, a former Idaho Fish and Game commissioner, joined the group in the early 2000s, after retiring from the Marines and settling in Lewiston with his wife, Marilyn. He discovered birding as a child in St. Cloud, Minn., when World War II was dominating the headlines.

“My parents wanted to give me something more wholesome to think about, so they introduced me to birding,” he said.

The lifelong hobby has provided Carlson with myriad opportunities to travel, develop his photography skills and keep track of the official bird list for Asotin County for the Washington Ornithological Society. As of May, the count for 2021 was at 189 species.

“It gives you an excuse to be out in interesting places,” Carlson said. “The members have an opportunity to socialize and take pictures. We all have binoculars, and many of us bring cameras. If you get bitten by the bug, you fall into the more expensive equipment. Bird photography becomes a hobby for obvious reasons.”

Their latest field trip was to the Turnbull National Wildlife Refuge, near Cheney. Hells Canyon is another popular destination, along with Mann Lake and spots along the Clearwater River, north of Lewiston. This month the Canyon Birders are heading to the Blue Mountains.

“There are some neat birds along Peola Road in Asotin County, but it’s a terrible place to park a lot of cars,” Carlson said.

One of the most exciting birding events in the Lewiston-Clarkston Valley occurred about four years ago at Hells Gate State Park. John Hanna, of Lewiston, spotted a red-flanked bluetail, the third one ever seen in the lower 48 states, Carlson said.

The rare bird is normally found in Mongolia or wintering in Southeast Asia. This one probably arrived by ship after getting lost in the fog over the ocean, he said.

“That was interesting,” Carlson said. “It attracted people from all over the country, including “Big Listers.” They usually take a whole year off to look for birds in North America, and people were flying in here from South Dakota, Denver and other places to see that bird.”

At the time, Hells Gate park rangers “were having a ball,” Carlson said, because they usually don’t have that many visitors in December.

Another popular attraction is the pelicans that gather near Swallows Park and Chief Timothy. They started showing up around 2009, Carlson said, and no one knows why.

He’s seen too many birds to list, but said his personal favorites are the birds of prey, such as eagles, hawks and owls. “We’ve got lots of them around here.”

Over the past year, the COVID-19 pandemic put a halt to most of the Canyon Birders’ gatherings. The group is adjusting and easing back into trips.

“It’s fun to see all of the changes over the years,” Carlson said. “There are an awful lot of good birders in this area, including professionals who teach at the local colleges. If anyone is interested in birding, this is a good place to be.”