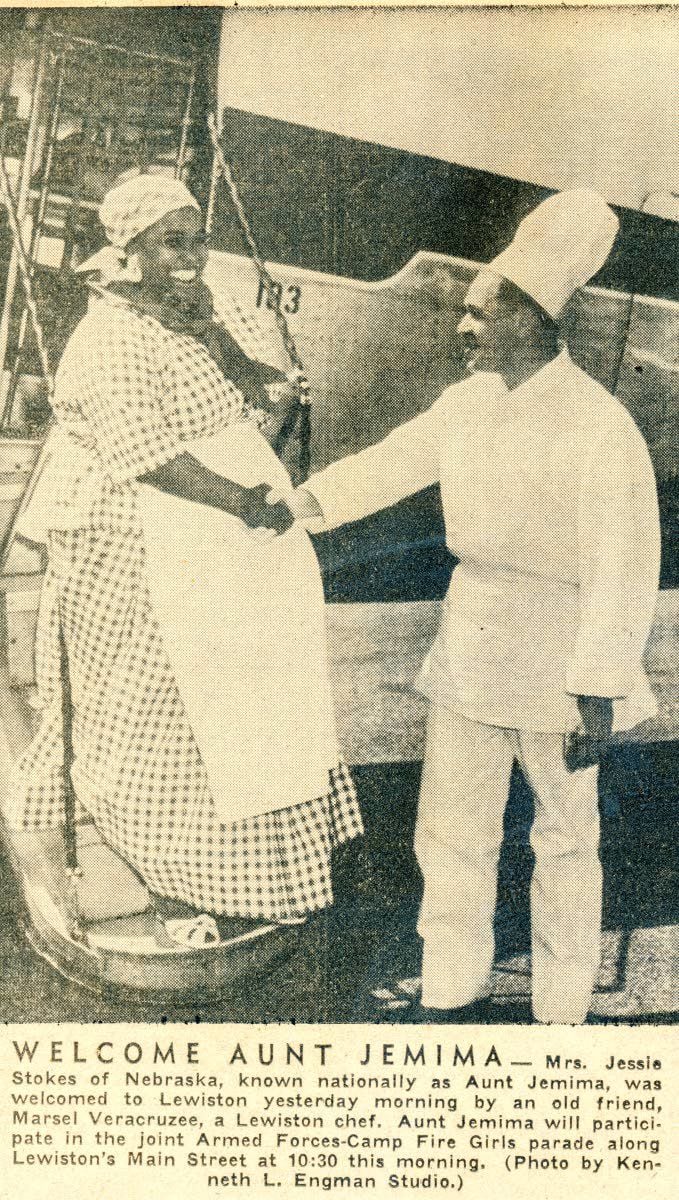 In a Lewiston Tribune clipping from Saturday, May 21, 1955, Mrs. Jessie Stokes of Nebraska, representing the brand’s marketing character Aunt Jemima, is welcomed to Lewiston by Marsel Veracruzee, a Lewiston chef. 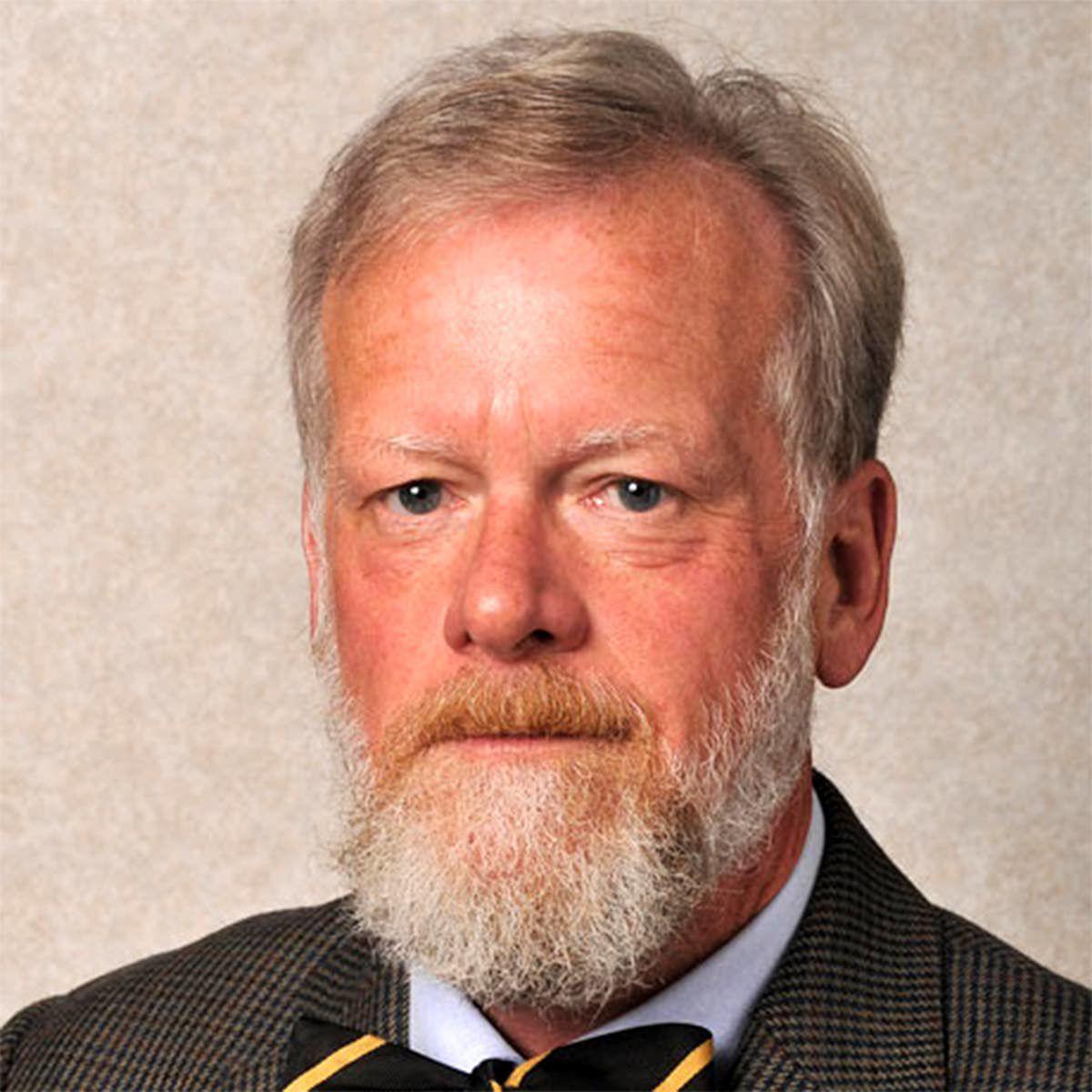 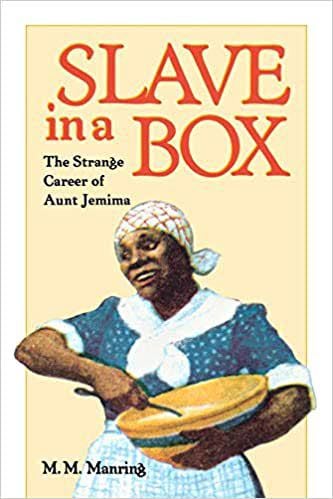 Maurice M. Manring’s book “Slave in a Box” details the history of the “Aunt Jemima” brand, which Quaker Oats recently announced will be discontinued.

In a Lewiston Tribune clipping from Saturday, May 21, 1955, Mrs. Jessie Stokes of Nebraska, representing the brand’s marketing character Aunt Jemima, is welcomed to Lewiston by Marsel Veracruzee, a Lewiston chef.

Maurice M. Manring’s book “Slave in a Box” details the history of the “Aunt Jemima” brand, which Quaker Oats recently announced will be discontinued.

The Aunt Jemima brand will soon be gone, nixed by Quaker Oats over its racist origins. But a record of her visit to Lewiston 65 years ago still exists in the archives of the Lewiston Tribune, a testament to a time when such stereotypes were widely accepted, and even celebrated.

The occasion was the joint National Armed Forces Day-Campfire Girls parade down Main Street on May 21, 1955, in support of a fund drive for a new Campfire Girls camp on Lake Coeur d’Alene. Police closed the road to traffic from First to 19th streets. National Guard soldiers marched, bands played, floats paraded, politicians preened and paradegoers were treated to a flyover of military aircraft at 11:10 a.m. on the dot.

But the best treat of all, at least for the hungry among the masses, was a free all-day breakfast of hotcakes, eggs, sausage and coffee whipped up by none other than Aunt Jemima herself. Or, to be more precise, one of the dozens of women hired to portray her at various events over the years.

A caption in a photo in the May 21 edition of the Tribune identified her as “Mrs. Jessie Stokes of Nebraska,” without specifying whether Jessie was her first name or her husband’s. Regardless, there is nobody with the last name Stokes on lists of the many women who were known to portray Aunt Jemima.

Author Maurice M. Manring, who wrote the book “Slave in a Box: The Strange Career of Aunt Jemima,” said he didn’t recognize Stokes’ name. But he wasn’t surprised.

“There were a lot of regional Aunt Jemimas,” Manring told the Tribune. “Quaker Oats up into the 1960s hired women to portray her at county fairs and community events, as well as schools, all across the nation. There are really more than I could reasonably attempt to keep track of, over the years.”

The R.T. Davis Milling company hired former slave Nancy Greene to play Aunt Jemima in 1893 when it owned the brand. Lillian Richard, Anna Short Harrington, Edith Wilson and Ethel Ernestine Harper were among the more well-known women to play the role. Manring said Quaker Oats greatly expanded that list with its practice of hiring regionally from one end of the country to the other, with dozens of women playing Aunt Jemima during the advertising boom after World War I.

“I get asked about specific women from time to time, but I rarely recognize their names,” he said. “There were a lot of them.”

Steven Branting was a first grader at Warner Elementary (now McGhee) when Stokes, in full character, made an appearance at an assembly in the school gym.

“We didn’t notice how large she was until she met with us and greeted us, and then you realized how large she was,” Branting recalled. “It really left an impression on me to remember her so distinctly. It was the first black person many of us had ever seen.”

As kids in the 1950s, no one realized that a hurtful stereotype was being perpetuated by the character, he said. But Branting believes his exposure to Aunt Jemima didn’t leave any scars.

“I don’t really think it was meant to demean,” he said. “It was never portrayed that way, but I understand why people feel that way. But I was raised in a very inclusive family.”

Branting was a Lewiston Orchards kid, so he didn’t make it downtown for the parade or to sample the free breakfast the next day. But according to ads and coverage of the Lewiston parade in the newspaper, Stokes and four assistants cooked and served thousands of breakfasts from a chuck wagon at Sam Alexander’s Lewis-Clark Garage at 108 Main St.

The smorgasbord wasn’t just dished up on the Saturday of the parade, but all day Sunday in what must have been a grueling marathon of pancake flipping. But the women who played Aunt Jemima only needed a rudimentary knowledge of cooking to do the job, because the main qualification was fitting a racist “mammy” stereotype.

“She had to be able to demonstrate how to make pancakes with the ready mix, so it wasn’t too demanding a culinary feat,” Manring said. “The company wanted women who could fit the image of Aunt Jemima both in appearance and demeanor — more often than not an older, cheerful, often larger woman who would speak in a kind of slave dialect and recount memories of her days on the plantation. They didn’t need professional actors, and I would imagine most of them weren’t.”

Manring said he didn’t judge the women who took an opportunity to get a paying job, but thinks the whole system smacked of exploitation. Stokes said the parade and celebration were the most wonderful she had ever worked in coverage in the May 22 Tribune.

“The people here are very enthusiastic and the weather was wonderful,” she said.

St. Joseph, Mo., newspaperman Chris L. Rutt appropriated the original Aunt Jemima image and name in 1889 from racist minstrel and vaudeville shows as a way to market a new pancake mix developed at a flour mill he bought with his friend Charles G. Underwood.

The Quaker Oats Company bought Aunt Jemima Mills in 1926 and turned it into one of the longest-running and most recognizable brands in American advertising history. The company attempted to update the brand over the years with more progressive depictions of the character, but it admitted earlier this month that its origins were deeply tied to slavery and racism and finally agreed with decades-old calls to pull the plug. Cornell University Africana Studies professor Riché Richardson wrote about those racist origins for the New York Times in 2015 in a call to retire the brand.

“This Aunt Jemima logo was an outgrowth of Old South plantation nostalgia and romance grounded in an idea about the ‘mammy,’ a devoted and submissive servant who eagerly nurtured the children of her white master and mistress while neglecting her own,” Richardson wrote. “Visually, the plantation myth portrayed her as an asexual, plump black woman wearing a headscarf.”

The company was ultimately unable to ignore calls to retire the Aunt Jemima name after the country was swept by outrage over the killing of 46-year-old George Floyd by Minneapolis police last month and subsequent protests over the mistreatment of black Americans throughout U.S. history.