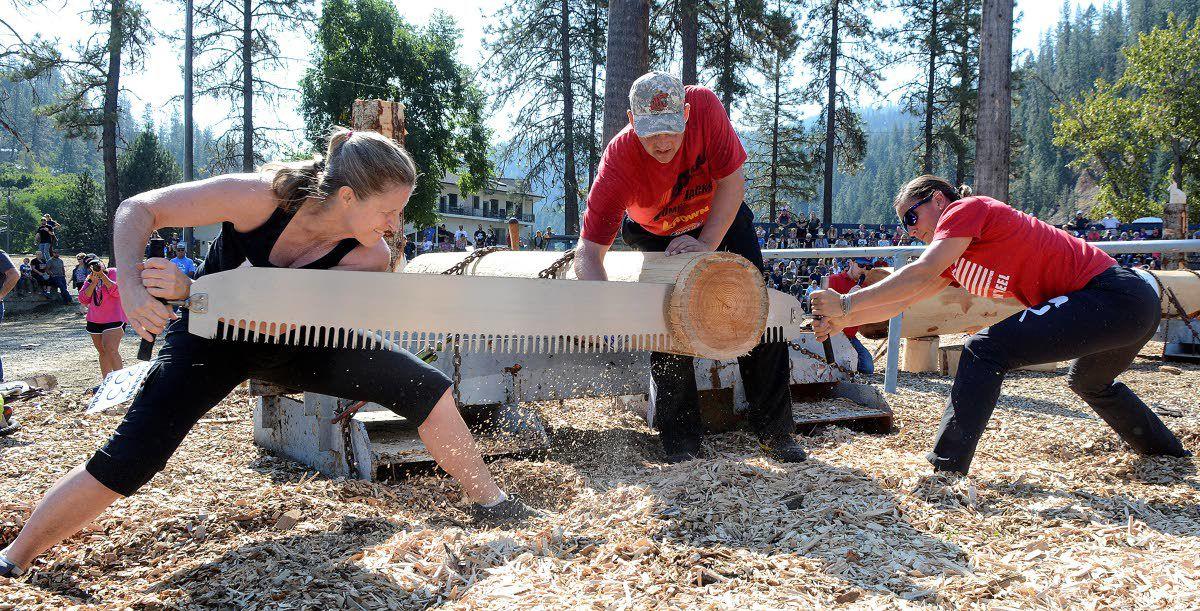 Brenda Pouchnik of Viola (left) and Erin LaVoie of Spokane tear through a horizontal log in the Two Jills event during the 72nd Orofino Lumberjack Days Annual Logging Show Sunday. 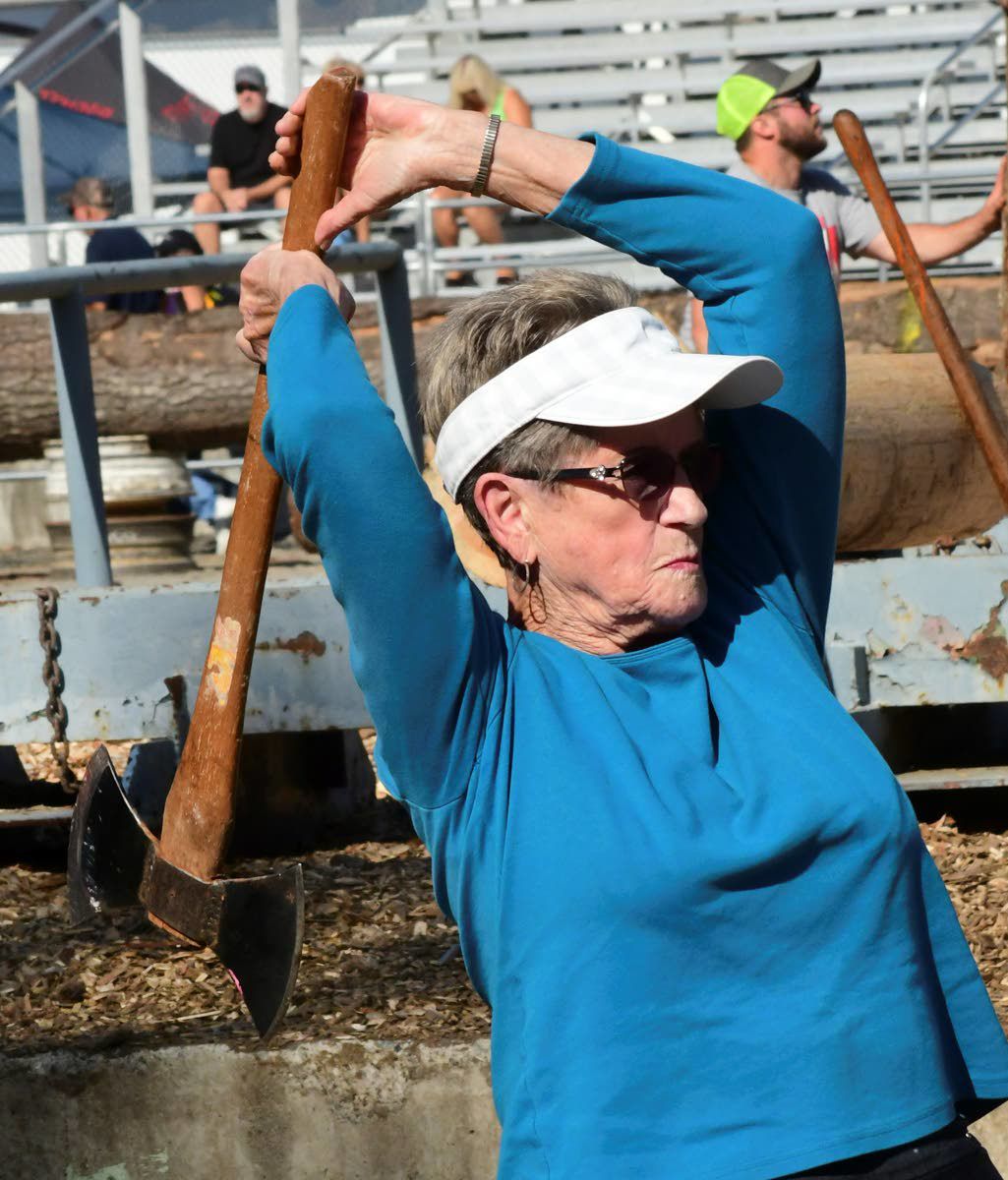 Eighty-year-old Jean Boyko of Port Alberni, British Columbia, throws the ax with an experienced delivery from years of practice. 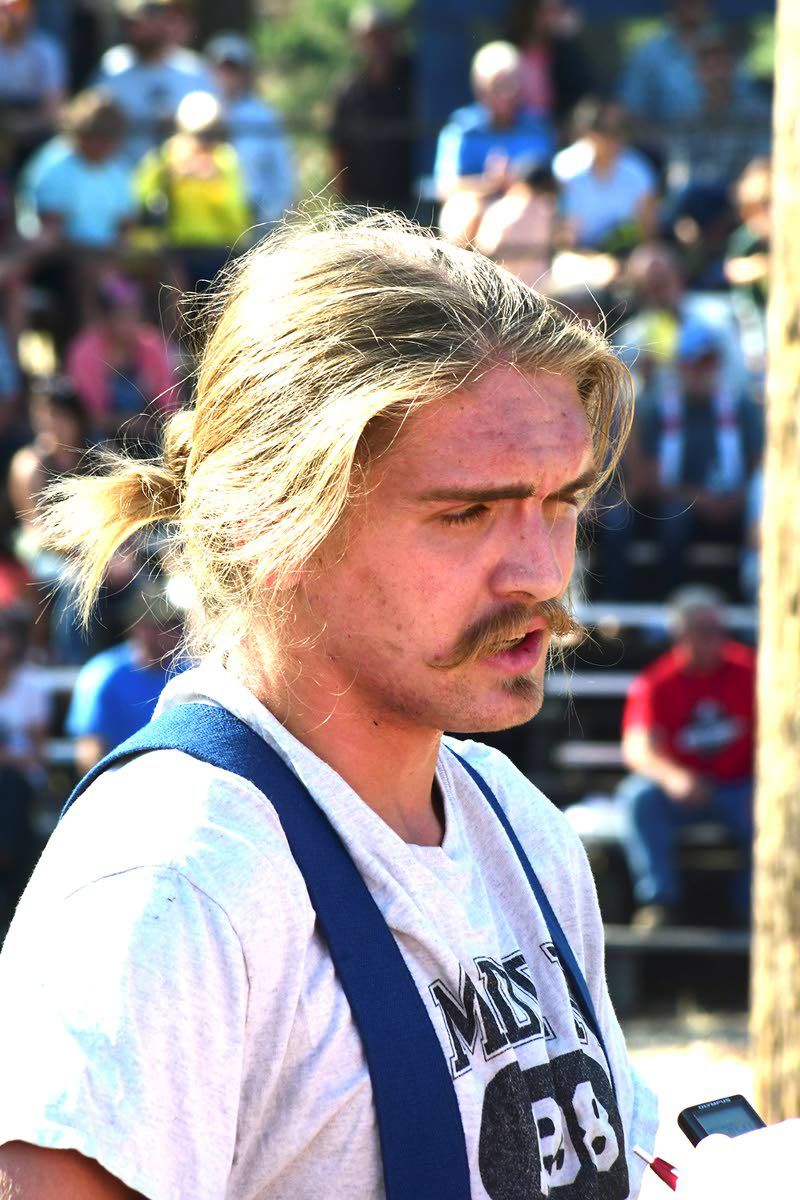 Brenda Pouchnik of Viola (left) and Erin LaVoie of Spokane tear through a horizontal log in the Two Jills event during the 72nd Orofino Lumberjack Days Annual Logging Show Sunday.

Eighty-year-old Jean Boyko of Port Alberni, British Columbia, throws the ax with an experienced delivery from years of practice.

OROFINO — Although the events at the annual Orofino Lumberjack Days logging show are associated with the tough days of even tougher loggers, 80-year-old Jean Boyko proves that even grandmas can do it.

Boyko, from Port Alberni, British Columbia, has participated in logging shows since she was 28 years old.

“My husband (Al) was interested in it and he started traveling to the different places,” Boyko said Sunday during the 72nd annual logging show here. The logging show caps the four-day Clearwater County Fair.

“And so we took our three children and they’d compete in the events that they could.”

Several of Boyko’s children and grandchildren continue to compete in logging shows, including her daughter, Brenda Pouchnik and her family of Viola, who participated in Sunday’s show.

The Boykos have traveled to and competed in logging shows around the world, including in Australia and New Zealand. Boyko said even though her husband no longer competes, he attends the shows and sharpens axes, saws and does whatever repair work might be needed. Al Boyko also announces some shows.

Boyko said she doesn’t think there’s anything unusual about an 80-year-old woman competing in a logging show. She stays in shape by practicing throwing the ax at home and doing floor exercises with other senior citizens.

“Oh yeah, anybody can do it. You don’t have to be a logger. … When I was 50 I used to think, ‘Oh, look, I’m 50 years old and I’m still doing this stuff,’ but I just kept going to the shows and sometimes you have to enter two events. So I was going to the chainsaw bucking and I did that right up to my mid 70s. And then it bothered my back too much so I stopped and I’ve just gone into the axe throwing.”

Three weeks ago Boyko entered a logging show near her hometown and won first place. She got a $200 prize. The money was nice but it’s not the biggest reward, she said.

“It’s the kids; the involvement of the families in the sports,” Boyko said. “The people are just like family. Every year you meet them and you become very close friends.”

If you live near Newberg, Ore., and accidentally lock your keys in your car and your car is stuck up a tree you might want to call Tristan VanBeek, who is a locksmith by day and a log climber on the weekends.

Sunday VanBeek scaled a 60-foot pole so fast that even squirrels were envious.

This is VanBeek’s third year competing in logging shows after having been tutored in the sports by a couple of friends, “who took me under their wings and taught me. And so after that it’s just one step at a time, just getting all the skills down and having fun all the time, for sure.”

Although 60 feet seems a formidable climb it wasn’t a stretch for VanBeek, who competed in the World Lumberjack Championships and scaled a 90-foot pole.

Even though he remained at the top of the pole only a split second before ringing the cowbell at the peak and grappling back down, VanBeek said he didn’t miss the panorama.

“Oh, it’s a view like you never get, you know. There’s nothing else in the world that you can climb straight up in the air and get a good view like that.”

It takes a lot of work to put on a successful show like the lumberjack contest and the pool of workers is growing smaller every year, said Craig Marvin, president of the logging show committee.

The show is financed through an auction held each year and costs about $50,000 to produce he said. All the logs and other equipment are donated.

“We had our auction yesterday (Saturday) and that’s what makes it all a free show,” Marvin said. “Everybody comes in the park for free and everything.”

The show draws spectators from all over the Northwest, as attested by the array of license plates on the vehicles parked throughout downtown Orofino.