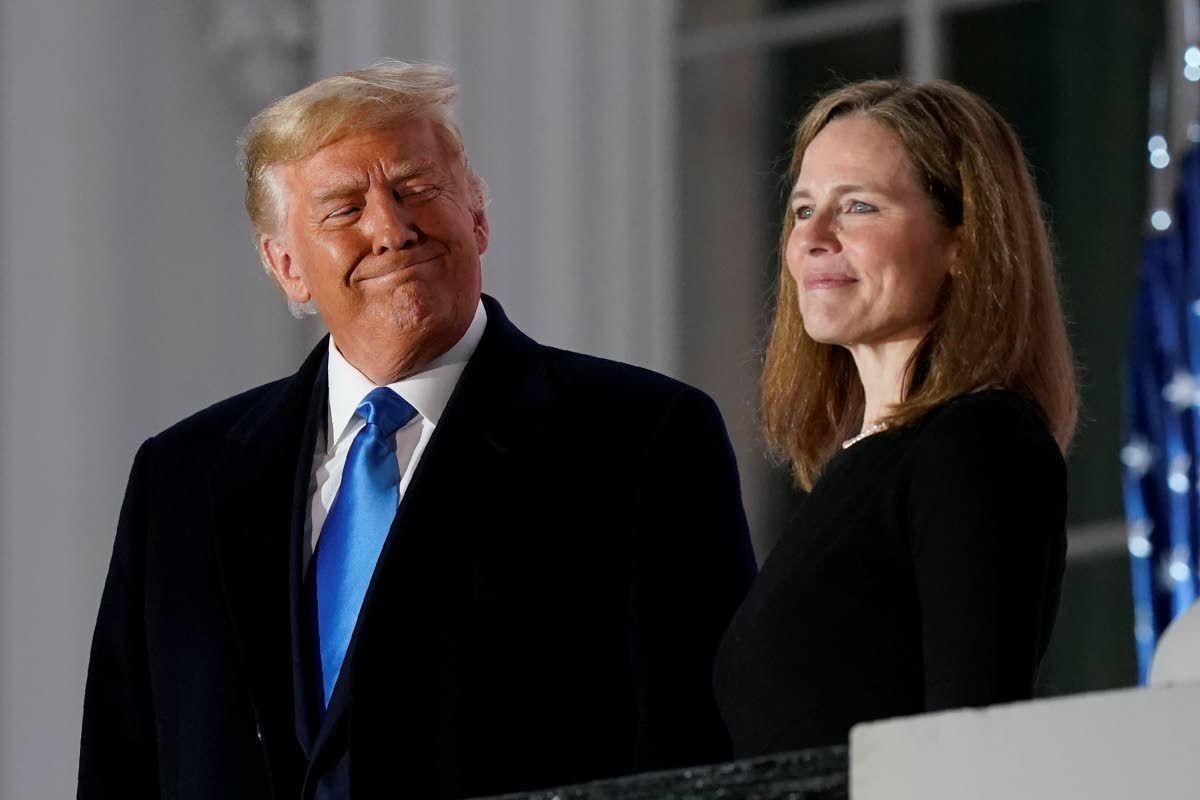 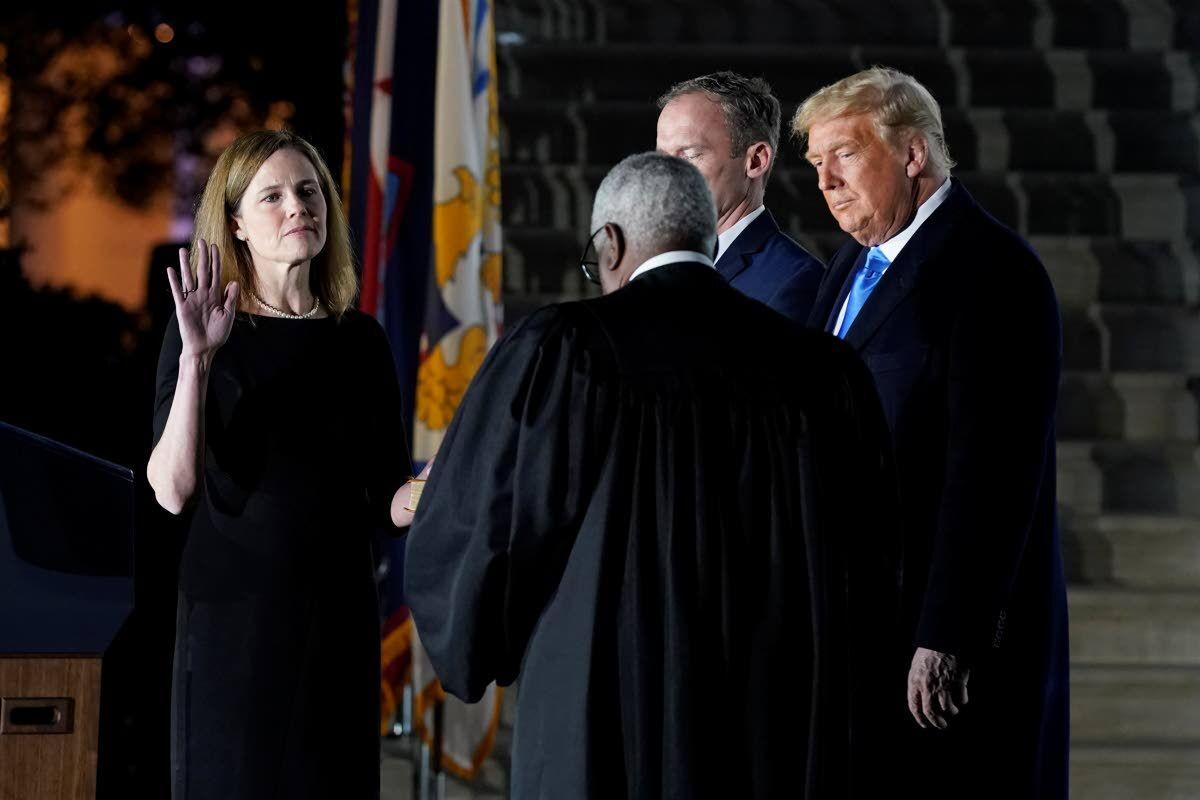 President Donald Trump watches as Supreme Court Justice Clarence Thomas administers the Constitutional Oath to Amy Coney Barrett on the South Lawn of the White House in Washington, Monday, Oct. 26, 2020, after Barrett was confirmed by the Senate earlier in the evening. Jesse Barrett holds the Bible. (AP Photo/Patrick Semansky)

President Donald Trump watches as Supreme Court Justice Clarence Thomas administers the Constitutional Oath to Amy Coney Barrett on the South Lawn of the White House in Washington, Monday, Oct. 26, 2020, after Barrett was confirmed by the Senate earlier in the evening. Jesse Barrett holds the Bible. (AP Photo/Patrick Semansky)

WASHINGTON — The Senate on Monday confirmed Judge Amy Coney Barrett to the Supreme Court in the most partisan confirmation vote for a justice in modern American history, securing a 6-3 conservative majority widely expected to expand gun rights and permit new restrictions on abortion.

No Democratic senator supported Barrett’s confirmation — the first time since the mid-1800s that a Supreme Court nominee has not received any votes from the opposing party. The final vote was 52-48.

Barrett, who will take the seat of the late Justice Ruth Bader Ginsburg just days before the presidential election and after millions of Americans have already cast their ballots, is scheduled to be sworn in by Chief Justice John G. Roberts Jr. in a private ceremony today at the Supreme Court, the court announced. She took a separate constitutional oath in a ceremony with Justice Clarence Thomas on Monday evening at the White House.

Hoping to galvanize voters before the Nov. 3 election, Republican senators pushed the nomination through at a pace unmatched in 45 years.

But with Barrett’s confirmation coming four years after Republicans refused to consider President Barack Obama’s nominee, Judge Merrick Garland, during an election year, Democrats predicted a backlash for what they viewed as a second Supreme Court seat snatched by Republicans.

President Donald Trump’s third appointment to the bench ensures that his impact on the High Court will live well past his presidency. In addition to abortion and gun ownership, the newly reinforced conservative court could leave its legacy on LGBTQ equality, voting rights and affirmative action. Barrett will be seated in time to hear any potential 2020 election disputes and the Nov. 10 oral arguments in the latest GOP-backed lawsuit seeking to invalidate the Affordable Care Act.

“People are in for a rude awakening in terms of what this court is about to do to roll back the clock on some stuff that we pretty much think we already agree upon,” Sen. Brian Schatz, D-Hawaii, said in Democrats’ all-night talk-a-thon on the Senate floor to protest the nomination.

With Barrett’s confirmation, the coming term will present the most conservative Supreme Court relative to the American people since the 1930s, according to Erwin Chemerinsky, dean of the law school at UC Berkeley.

In the past two decades, liberal rulings in the Supreme Court typically were possible only when a Republican-appointed justice — such as Roberts or Justice Anthony M. Kennedy — sided with the court’s four liberals.

“It will become so much less likely that we will have a liberal victory,” Chemerinsky said, because “the liberals now need to get two rather than one.”

Only seven Supreme Court vacancies have arisen within six months before a presidential election, according to a government report. Only two of those vacancies were filled by the Senate before the election — with Barrett and, in 1916, Louis Brandeis. In the other cases, the Senate rejected the nomination and tabled it until later, or action was otherwise taken after Election Day.

Democrats accused Republicans of violating the precedent they set in 2016 after the death of Justice Antonin Scalia in February of that year. Until Ginsburg’s death Sept. 18, some key Republicans, including Senate Judiciary Committee Chairman Lindsey Graham, R-S.C., had promised they would not fill a seat during an election year.

But faced with the rare opportunity to dramatically tip the balance of the court, Republicans argued that this vacancy was different than Scalia’s because in 2016 the Senate and White House were controlled by different parties.

They praised Barrett’s academic record and judicial temperament. Barrett, 48, was a clerk for Scalia and a Notre Dame law professor before her appointment to the 7th Circuit Court of Appeals. She will be the fifth woman to serve on the Supreme Court, the first mother of school-aged children and the only justice who did not attend an Ivy League school.

“I came to the Senate with the hope of putting judges like Amy Coney Barrett on the bench: thoughtful, intelligent men and women with a consummate command of the law and, most of all, with a clear understanding that the job of a judge is to interpret the law, not make the law,” said Sen. John Thune, R-S.D.

Pressed by Democrats during her confirmation hearing about reproductive rights, Barrett acknowledged her personal opposition to abortion but said those views would not have an impact on her legal decisions. Still, Republicans made clear that they were proud to support a nominee who opposed the landmark Roe v. Wade decision.

“This is the most openly pro-life judicial nominee to the Supreme Court in my lifetime. This is an individual who has been open in her criticism of that illegitimate decision Roe v. Wade,” said Sen. Josh Hawley, R-Mo.

Senate Majority Leader Mitch McConnell, R-Ky., has made no secret that he views the courts as his top priority, pledging to “leave no vacancy behind.”

Barrett will be the 220th judge confirmed by the Senate in Trump’s term, including three justices and 53 appellate judges. As of this week, there were only two appellate vacancies: Barrett’s old position at the 7th Circuit Court of Appeals and a seat on the 1st Circuit created by the death Monday of Judge Juan R. Torruella.

The White House has already identified a new nominee for Barrett’s old seat, and there is no doubt Senate Republicans will try to approve the candidate by the end of the year.

“Trump’s appointments of youthful originalists and contextualists ... will have a long-standing impact,” said Ilya Shapiro, director of the Robert A. Levy Center for Constitutional Studies at the libertarian Cato Institute.

While Republicans for years have used the importance of the courts as a rallying cry for conservative voters, Democrats have not done so until recently, and polls suggest the matter has become increasingly important to liberal voters.

If Democrats win control of the White House and the Senate in next week’s election, progressives will immediately confront Democratic leaders with demands to add seats to the Supreme Court and fill them with liberals. Democratic lawmakers, even those who have resisted such calls in the past, are not ruling it out.

Republicans “expect that they’re going to be able to break the rules with impunity, and when the shoe maybe is on the other foot, nothing’s going to happen,” said Sen. Angus King, I-Maine, who caucuses with Democrats and has typically been viewed as opposed to changing Senate rules.

But previous attempts to add seats, notably by President Franklin Roosevelt, have failed. And to add seats, Democrats would almost certainly need to change Senate rules to eliminate the filibuster for passing legislation.

Democrats boycotted last week’s committee vote on Barrett in protest but had little ability to stop her confirmation because of the narrow GOP majority in the Senate.

Vice President Mike Pence, who had been expected to preside over the Senate vote, did not participate after Democrats demanded he avoid the chamber following several COVID-19 cases among his staff.

The last time a justice was confirmed without a single vote from the opposing party was in 1869, according to National Journal. Justice Brett Kavanaugh received one Democratic vote during his 2018 confirmation, from Sen. Joe Manchin III of West Virginia.

Two Republicans — Sens. Lisa Murkowski of Alaska and Susan Collins of Maine — had opposed the GOP effort to confirm Barrett so close to Election Day. Collins voted no on Barrett’s confirmation, but Murkowski voted yes because she didn’t think Barrett should be held responsible for the Senate Republican effort to confirm her.