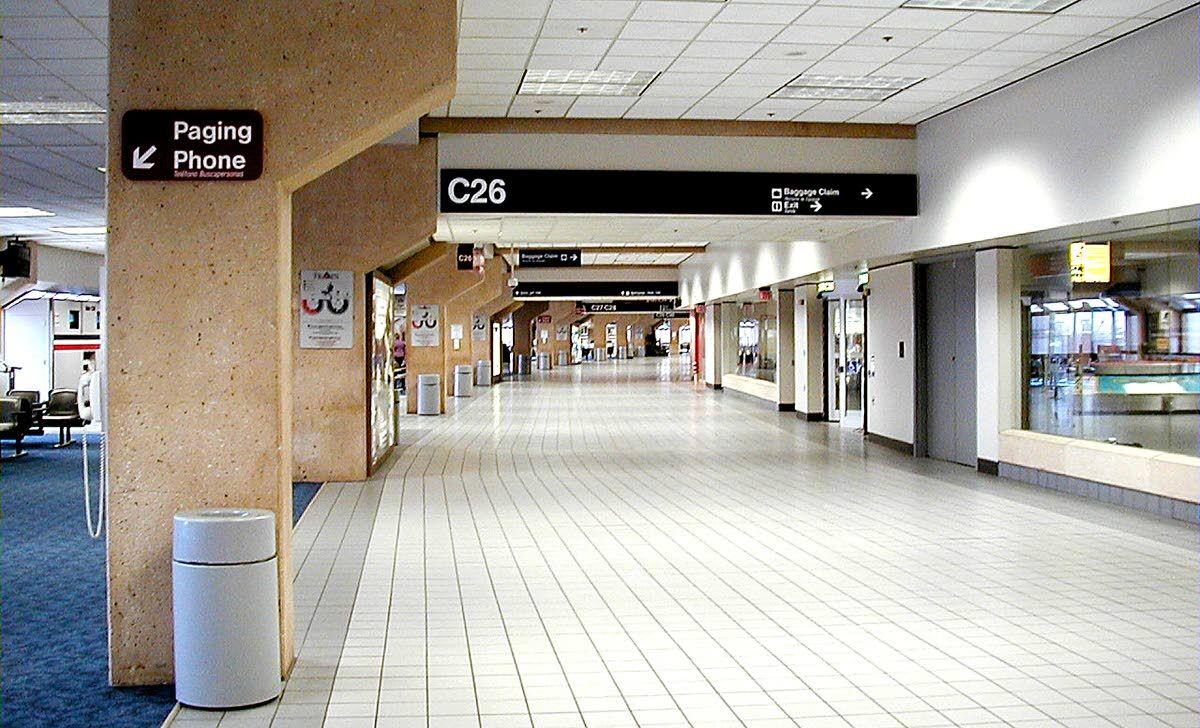 The empty American Airlines terminal at Dallas Fort Worth Airport on the morning of Sept. 11, 2001, after the FAA grounded all non-military air traffic in the United States following the terrorist attacks in New York and Washington. (AP Photo/Dr. Scott M. Lieberman) 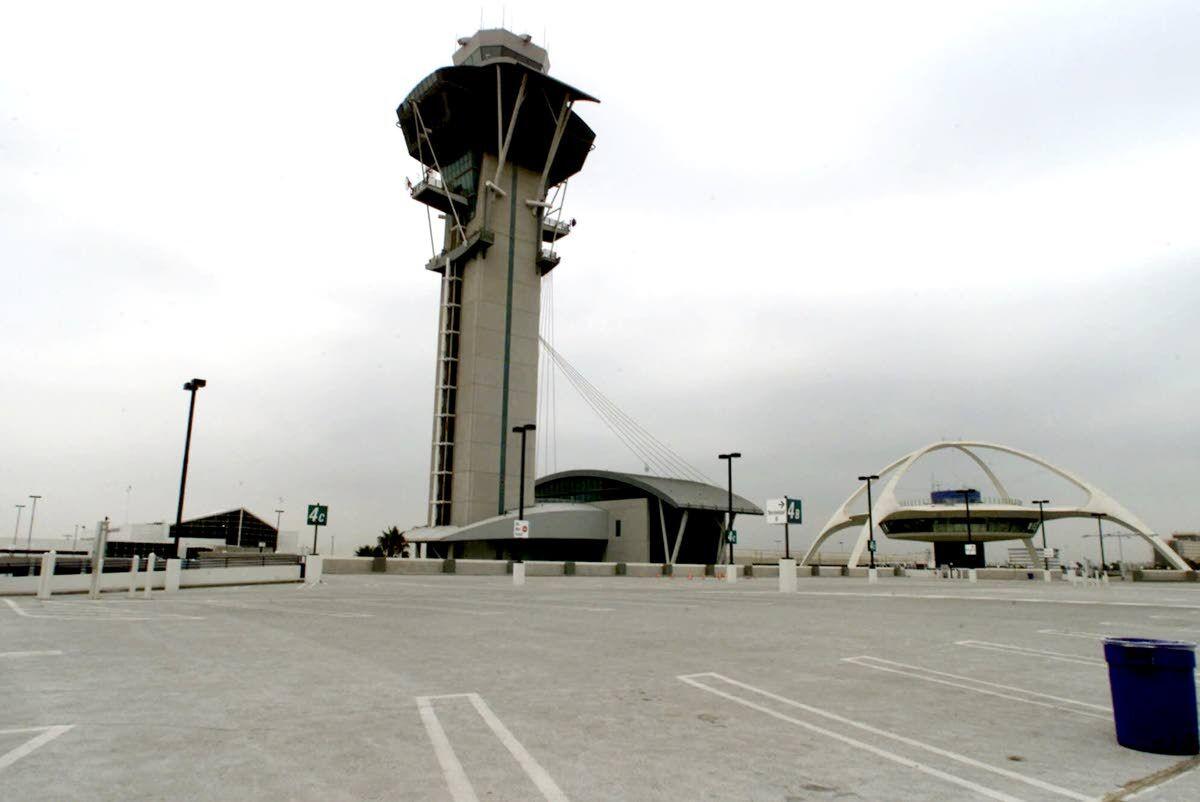 With the air traffic control tower in the background, a parking lot at Los Angeles International Airport the airport was shut down after multiple suspected terrorism attacks on the East Coast, Tuesday, Sept. 11, 2001. (AP Photo/Damian Dovarganes) 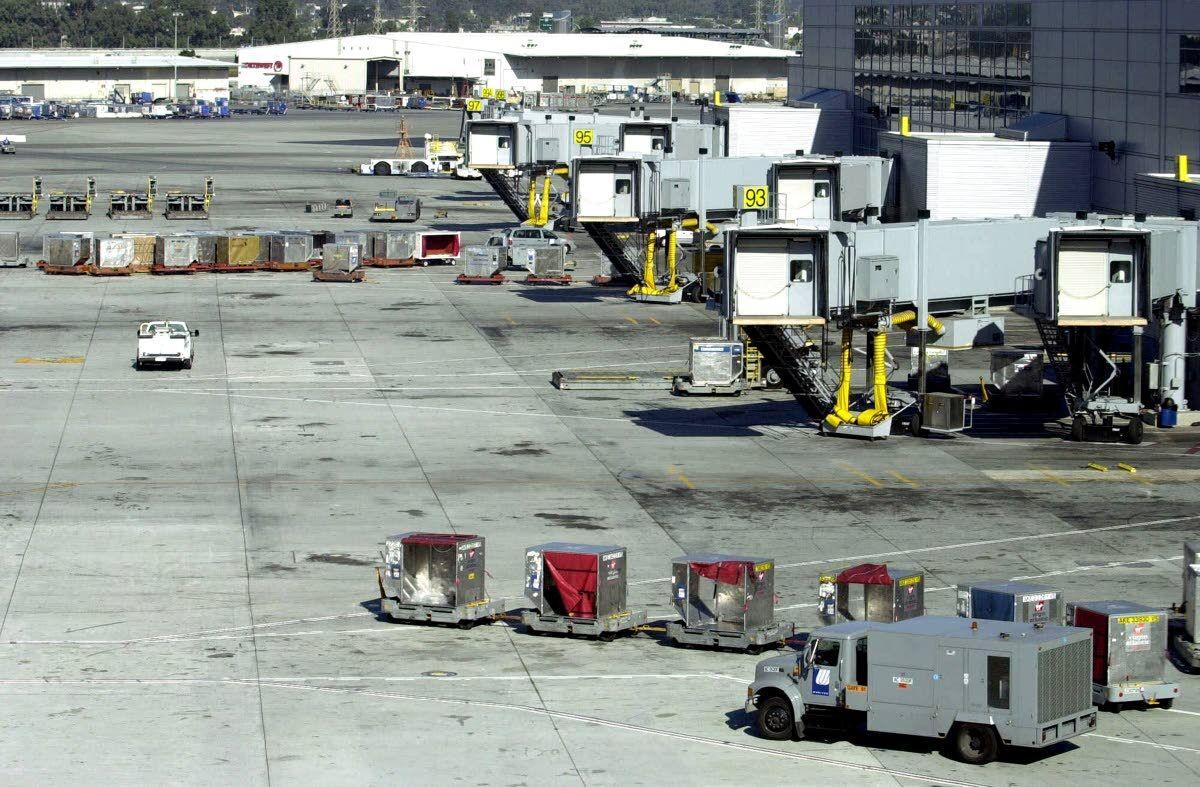 The empty American Airlines terminal at Dallas Fort Worth Airport on the morning of Sept. 11, 2001, after the FAA grounded all non-military air traffic in the United States following the terrorist attacks in New York and Washington. (AP Photo/Dr. Scott M. Lieberman)

With the air traffic control tower in the background, a parking lot at Los Angeles International Airport the airport was shut down after multiple suspected terrorism attacks on the East Coast, Tuesday, Sept. 11, 2001. (AP Photo/Damian Dovarganes)

CHICAGO — Air traffic around the nation was halted for the first time in history Tuesday as stunned travelers watched televised pictures of the smoking ruins of New York’s World Trade Center and the Pentagon, both attacked by terrorists.

The Federal Aviation Administration ordered all outbound flights grounded following the fiery twin disaster at the World Trade Center around 9 a.m. The FAA said the ban would not be lifted until today at 9 a.m. PDT, at the earliest.

All domestic commercial flights — other than the four that were crashed by terrorists — had reached their destinations by early Tuesday afternoon, according to the FAA. Some airports were evacuated.

“Anybody that is planning on going somewhere isn’t going anywhere at least for now,” said James Kerr, deputy director at Mitchell International Airport in Milwaukee.

“These terrorist acts are designed to steal the confidence of Americans,” he said. “We will restore that confidence.”

On Tuesday, thousands of passengers gathered around TV sets at airports, staring silently at images of smoke billowing over Manhattan’s skyline, flames shooting from Pentagon windows and people covered with soot running in the streets.

“I’m sitting here with shivers down my spine,” said Dan Weiland, of Lewisville, Texas, an American Airlines passenger at Boston’s Logan Airport. He said he called his children to reassure them.

Steve Hyatt, 55, of San Antonio, was stunned when he heard the news at Denver International Airport. “I just felt like I went into a trance and a dream,” he said.

“It’s going to be interesting to see what our country does in light of what took place with Pearl Harbor and comparing this to Pearl Harbor,” he added. “But who do you fight, who do you get mad at?”

Around the nation, airports were put under heightened security as officials considered the tremendous security breach that had allowed Tuesday’s terrorist attacks.

Logan Airport — the departure point for two of the doomed planes — underwent a security sweep.

At Chicago’s O’Hare Airport, passengers were barred from entering the gated areas, and police patrolled with dogs.

At Seattle-Tacoma International Airport and Denver’s airport, concourses were closed.

In New Orleans, passengers were not allowed into the airport, but it was not evacuated.

Officials said the Trade Center apparently was hit by two planes, both Boston-to-Los Angeles flights, carrying a total of 157 people: United Airlines Flight 175, with 65 people on board, and American Airlines Flight 11, with 92 people aboard.

The Pentagon was hit by American Flight 77, which was seized while carrying 64 people from Washington to Los Angeles.

And in Pennsylvania, United Flight 93, a Boeing 757 en route from Newark, N.J., to San Francisco, crashed about 80 miles southeast of Pittsburgh with 45 people aboard.

The four planes carried 266 people. There was no word on survivors. At the Pentagon, about 100 people were believed dead.

The devastating assault on America’s centers of government and commerce renewed long-standing concerns about flaws in airport security.

The General Accounting Office warned in April 2000 that “serious vulnerabilities in our aviation security system exist and must be adequately addressed.”

The inspector general’s office announced in August it would assess what the FAA was doing to make sure airlines were thoroughly screening passengers and baggage.

Rep. John Mica, chairman of the House aviation subcommittee, said Tuesday that before the August congressional recess, he had called for a complete review of airport security.

“Some of the training and actual deployment of equipment has been far from adequate,” Mica said in an interview.

Those concerns were on the minds of travelers Tuesday.

“You don’t ever think about somebody that would actually attack the U.S.,” said Tom Fickard, 29, of Shreveport, La., a passenger at Detroit Metropolitan Airport.

At many airports, hundreds of stranded travelers stood in long lines, waiting to call families and friends.

“Someone is trying to make a serious statement and I hope we do likewise,” said Scott Gilmore, 55, who had planned a trip to Washington, D.C., from the Dallas-Fort Worth International Airport. n