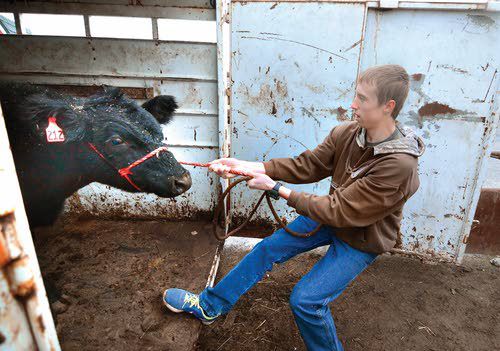 FFA member Wyatt Weissenfels, an Asotin High School junior, gives a tug to his growing steer at the recent weigh-in for Asotin County Fair projects. There’s a lot of working with animals for FFA members, but also more than just animals.

The agriculture classes at Asotin High School cover a wide variety of topics including budgeting and personal finances. 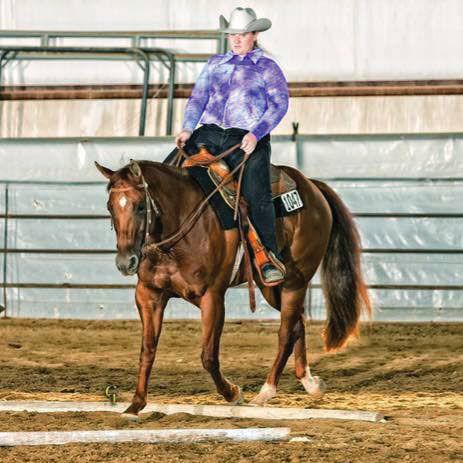 Banners of accomplishments ring the classroom where the FFA Program meets. 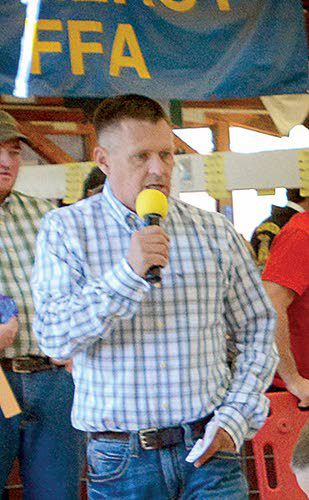 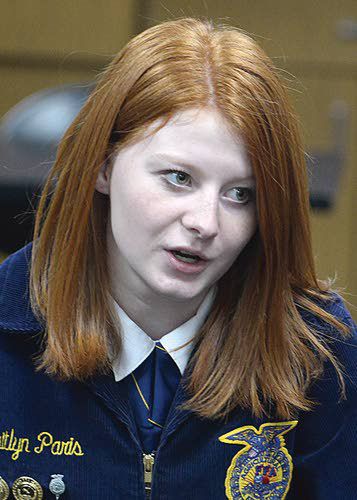 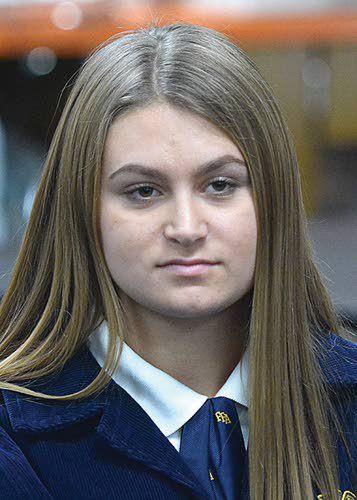 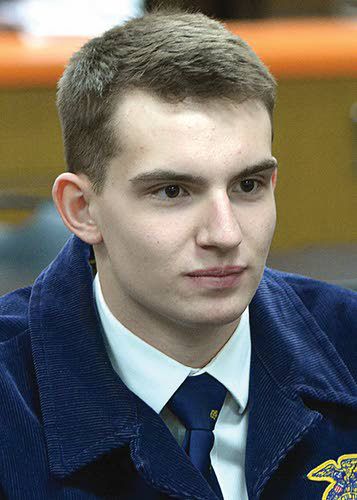 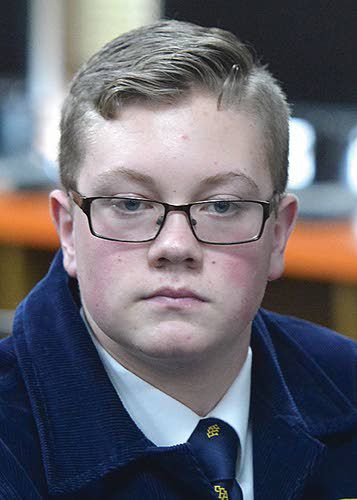 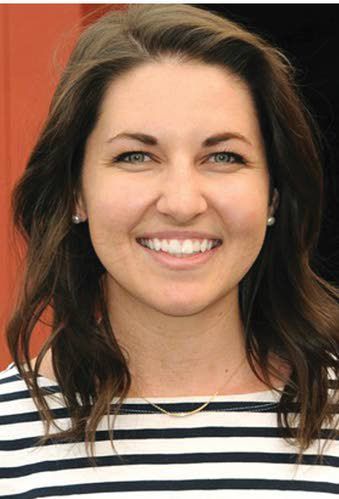 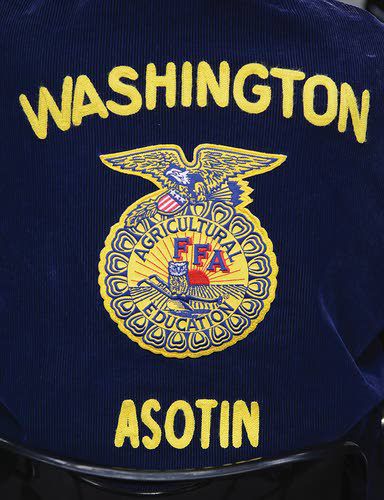 FFA member Wyatt Weissenfels, an Asotin High School junior, gives a tug to his growing steer at the recent weigh-in for Asotin County Fair projects. There’s a lot of working with animals for FFA members, but also more than just animals.

The agriculture classes at Asotin High School cover a wide variety of topics including budgeting and personal finances.

Banners of accomplishments ring the classroom where the FFA Program meets.

"I work at a vet clinic, and people are shocked at how I can talk to people not only over the phone but in person - because of FFA," Paris said.

Paris puts communication and leadership skills near the top of the list when she discusses what she's gained from FFA, the agricultural education student organization. She's chapter secretary at Asotin, and over the past four years has participated in parliamentary procedure competitions, livestock judging and market swine and rabbit projects.

"It's a lot more than just selling and showing an animal at the fair," said fellow member Cassie Clovis, a sophomore at Asotin.

Clovis led a group of Asotin FFA peers in a mock meeting competition at the National FFA Convention in Indianapolis this fall, earning recognition as top chair in the nation while the team took second place overall.

Hundreds of high school students in southeastern Washington and north central Idaho take advantage of the skill-building and leadership opportunities FFA offers, whether they're rooted in the world of agriculture - or not.

"This is my very first year having an animal in the fair," he said.

He wouldn't have considered himself a likely FFA member. But a couple of years ago, FFA adviser Glen Landrus heard Isley give a presentation to the Asotin-Anatone Activity Boosters, and he recognized a good FFA candidate.

Isley had no background in agriculture, but he quickly learned FFA encompassed more than raising animals and growing crops. Generations ago, the club's official name was an acronym for Future Farmers of America, but that no longer is the case. Ag careers, Isley learned, include science, marketing and business management.

"That has opened my eyes to agriculture is more than just farming," he said.

In addition to his success at nationals, Isley has participated in an ag issues forum, in which a team makes a prepared presentation about current ag issues; competed in meats evaluations; and serves as the chapter photographer.

"The majority of people don't realize the advantage that you get through FFA once you get out of high school - the public speaking, leadership," Bailey said.

The high school senior plans to pursue a business degree with a minor in entrepreneurship at Eastern Washington University.

An often-repeated phrase in the FFA organization is that the group is "more than cows, sows and plows." A related quote, Bailey said, describes FFA as: "beakers, speakers and job seekers."

"And I know that to be true," he said. "The leadership skills, public speaking skills and the ability to think on your feet are all skills I've learned through FFA."

Grangeville High School teacher and FFA adviser Katie Mosman grew up in nearby Nezperce, a member of FFA there.

Mosman knew when she was 6 years old she wanted to be an ag teacher.

"I grew up on a farm and had always been very passionate about agriculture and education as well," she said. "Becoming an ag teacher was just a perfect marriage of those."

Mosman, who graduated from Nezperce High School in 2009, taught in Meridian, Idaho, and at Vallivue High School in Caldwell, Idaho, before returning to the Camas Prairie this year.

"Grangeville's coming home for me, so I'm excited to be here," she said.

Mosman is not the only area teacher who returned to lead FFA chapters.

Landrus, who has taught ag classes and led the FFA chapter at Asotin for 22 years, is a Clarkston FFA alum, as is Cami Browne, who for the past 16 years has taught ag and advised FFA at Clarkston.

Any student in an agriculture class can participate in FFA at schools that offer the program. More than 20 choose to do so at Grangeville. Asotin's program has about 60 members, and close to 50 kids participate in FFA at Clarkston. Many other area high schools, including Troy, Genesee and Pomeroy, offer FFA. One that does not is Lewiston, which, Assistant Superintendent Lance Hansen said, focuses on other professional-technical organizations, with more of a bent toward industrial education and manufacturing.

Mosman sees connections to agriculture in the wide array of classes she teaches, including botany, zoology, introduction to agriculture, intro to mechanics, fabrication and welding.

"Agriculture is something that affects all people in some way, shape or form," she said. "And not just because it's food on the table, but it's part of the environment in which they live."

Agriculture influences public lands, water use and environmental policies and often is a factor in international agreements. The FFA program helps students understand that far-reaching scope of agriculture, Mosman said, while giving them hands-on experiences that reinforce skills from other classes, including math, science and public speaking.

Mosman said she has seen industry representatives offer students jobs on the spot during FFA events, including a position at the state farm bureau and an internship with the Legislature.

"It's just an incredible opportunity for kids to network with business and industry leaders," she said. "You just don't see those opportunities in very many student organizations."

Keaton Brenner was a sophomore FFA member at Clarkston High School when he asked for a job shadow opportunity at Lewiston Veterinary Clinic. A vet from the business had come to his home to work with an injured steer.

"I started to think that he had a really cool job," Brenner said.

The veterinarian he shadowed, Robert Thonney, was a former FFA member himself and an inspiration to Brenner. As he observed the work Thonney and his colleagues did, Brenner's career goals quickly solidified.

"I just fell in love the first day," he said. "I knew that's what I wanted to do was be a large animal vet."

Brenner, now a sophomore on a pre-veterinary track at Washington State University, said he had a head start on his goal thanks to FFA.

He and fellow Clarkston FFA alum Mikalah Marbach, who is studying equine science at Colorado State University in Fort Collins, earned the American FFA degree this fall at the national convention. The designation requires extensive project participation, academic achievement and community service, something only 1 percent of FFA members achieve, according to the organization.

Both Brenner and Marbach attribute their current trajectories to the foundation they built raising steers for the Asotin County Fair and Spokane Junior Livestock Show, traveling to judging contests and volunteering in the community.

"In high school, FFA - that was my life," Marbach said. "I don't know where I would be today without FFA."

Marbach's father, Mike Marbach, participated in FFA in high school, and he joined his daughter and Brenner at the national convention. The event, attended by more than 60,000 students, advisers and family members, showcased FFA's robust position in education today.

Seeing his daughter awarded the national degree in that atmosphere was a proud moment.

"I got the state farmer degree, but nothing like she did," Mike Marbach said.