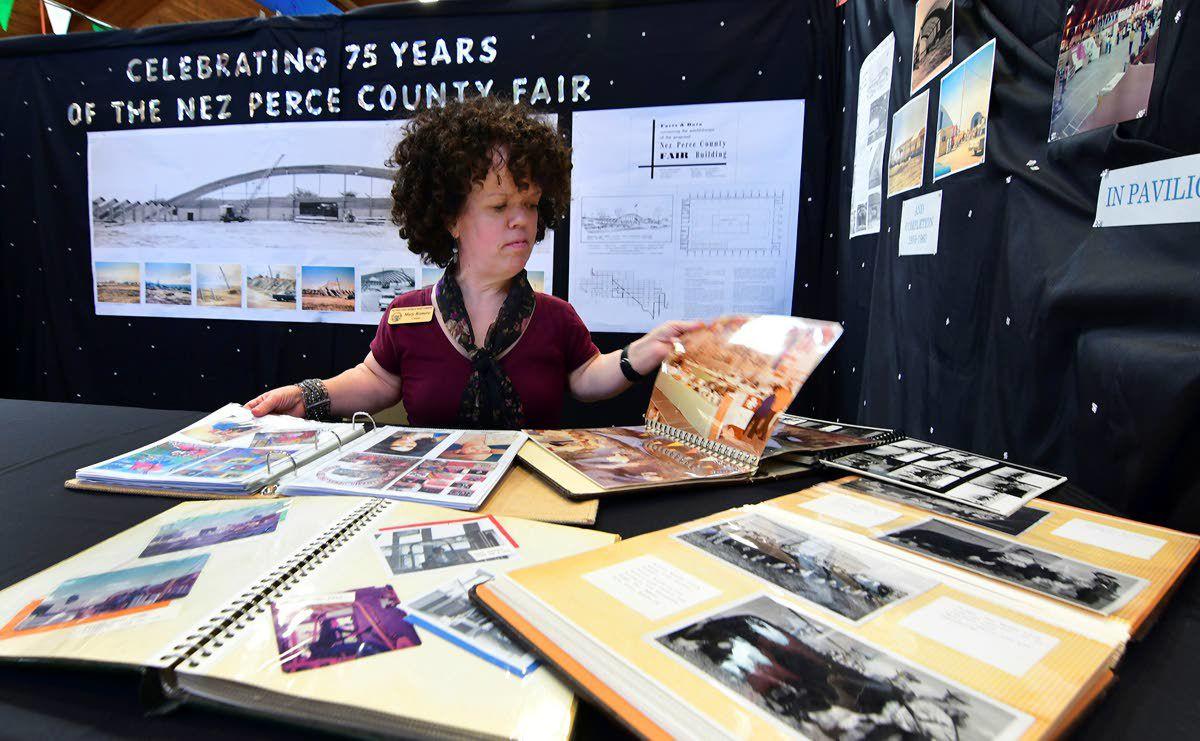 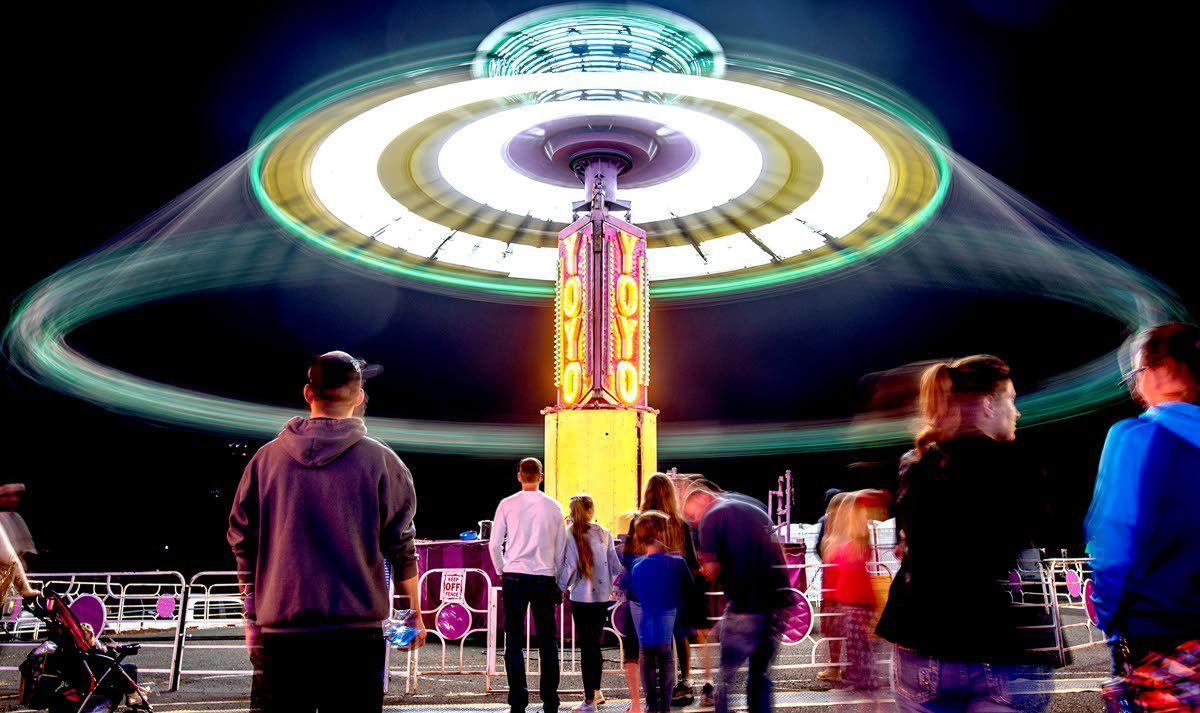 Riders on the YoYo spin around at the 2018 Nez Perce County Fair in Lewiston. This year's fair gets started Thursday and runs through Sunday.

Riders on the YoYo spin around at the 2018 Nez Perce County Fair in Lewiston. This year's fair gets started Thursday and runs through Sunday.

History will be front and center at the Nez Perce County Fair as the event celebrates its 75th anniversary with a “diamond jubilee” that culminates Sunday night with a concert by country music star Mark Chesnutt.

The annual agricultural rite runs Thursday through Sunday with all the usual farming-focused fun, from 4-H animal and craft entries, to crop displays, livestock shows and a carnival. But fair Secretary Jan Alldredge said officials wanted to do something extra this year to reward the generations of county residents who steadfastly support the fair.

“The board has always wanted to bring in a headliner,” Alldredge said. “So they started looking into it and shopping.”

Fair Manager Mike Orton worked with a couple of talent agencies and discovered that Chesnutt would be touring at the right time of year. Everything came together, and the board booked the act for 1 p.m. Sunday. But then things started to unravel when Chesnutt’s people realized the distance between his Saturday show in Jackpot, Nev., and Lewiston.

He wouldn’t be able to make that 1 p.m. showtime, but the board adjusted and moved the time to 6 p.m. The fair officially closes at 3 p.m. Sunday, but Alldredge said anyone with a valid ticket for that day’s fair can attend the concert. People who just want to attend the concert need to buy a ticket to the fair, which is $8 for an adult. But that’s still quite a deal compared to tickets that start at $23 for the previous night’s show at a Nevada casino, Alldredge said.

Fairgoers are welcome to stay at the fairgrounds between 3 and 6 p.m. as they await the show, or they can get a hand stamp and return later. Food vendors have agreed to stay open to feed the masses. The carnival will run to 4 p.m. that day. Discounted, $20 wristbands for one-day admission to the rides are on sale at Rosauers and the Lewiston and Clarkston Albertsons stores until 7 p.m. today. The price goes up by $5 after that.

The fair may be marking a new chapter by bringing in its biggest name ever, but it is also taking a look back in history for its diamond jubilee. The board worked with the Nez Perce County Historical Society to create a booth just inside the pavilion main entrance that contains hundreds of photos from fairs gone by, and a digital slideshow with even more photos.

And the historical society put together its own exhibit on fair history just across the aisle to the south. Both exhibits will help visitors understand how the fair officially got started in 1944, but also how it was preceded by several other annual events that showcased the agricultural prowess of area farmers, ranchers, gardeners and 4-H club members.

The most definitive account of that history came from Loren Kambitsch, extension agricultural agent and former fair secretary, in an article he wrote in 1982 for the historical society’s journal, the Golden Age. The earliest manifestation of something like a fair was a produce show held in partnership between Nez Perce and Asotin counties at the former site of the Clarkston Airport where Walmart is now located. Fair Street got its name from the event, Kambitsch wrote.

Across the river, a livestock show was gaining steam at the East Lewiston site where Clearwater Paper now sits. And Culdesac put on an annual Corn Show, centered on a fair and rodeo, from the late 1920s until 1941. Kambitsch noted the Corn Show was the first place in the county where 4-H girls could exhibit their projects.

The disparate events eventually came together in North Lewiston in conjunction with the Lewiston Roundup under the leadership of University of Idaho Extension Agent Joseph Thometz. Still, many exhibits had to be displayed at schools and other buildings like the Lewis-Clark Hotel, so supporters raised almost $5,000 in 1944 to build the Tri-State Agriculture and Livestock Pavilion at the Roundup site. The board renamed the building after Thometz in 1953.

The arrangement between the Roundup and the fair board was successful for years. But Kambitsch’s article described increasingly cramped conditions at the ever-growing event.

“The pavilion bulged with displays of all types,” he wrote of the fairs between 1955 and 1957. “The 4-H pigs got loose in the flower show. The 4-H style show was being held on a mock-up stage in front of the bleachers of Roundup Park. There was only a scant amount of space for commercial displays. The 4-H livestock sale was held at Twin City Sales Yard sandwiched between their regular morning and afternoon Saturday sale. The roof of the exhibit hall leaked. The fair officials were under pressure to do something.”

Fair board members and Roundup officials were trying to negotiate for better conditions, but the fair board worried about constructing facilities on land it didn’t own. And the area was being studied as a possible site for industrial and port development, making it even less attractive.

That led to a land search. County commissioners settled on a 25-acre parcel on Burrell Avenue owned by Irene Nichols, and sold some property east of the Orchards to finance the purchase. Nez Perce County Fair Buildings was incorporated in 1959 to develop the land, and fundraisers working out of an office in the Bollinger Hotel raised $170,000 by November.

Construction on the new fair pavilion began in March 1960, and the “clear-span” building with laminated wooden arches supporting its roof was ready for the fair in September. Crews also completed a stock barn for that first year at the current site, according to Kambitsch.