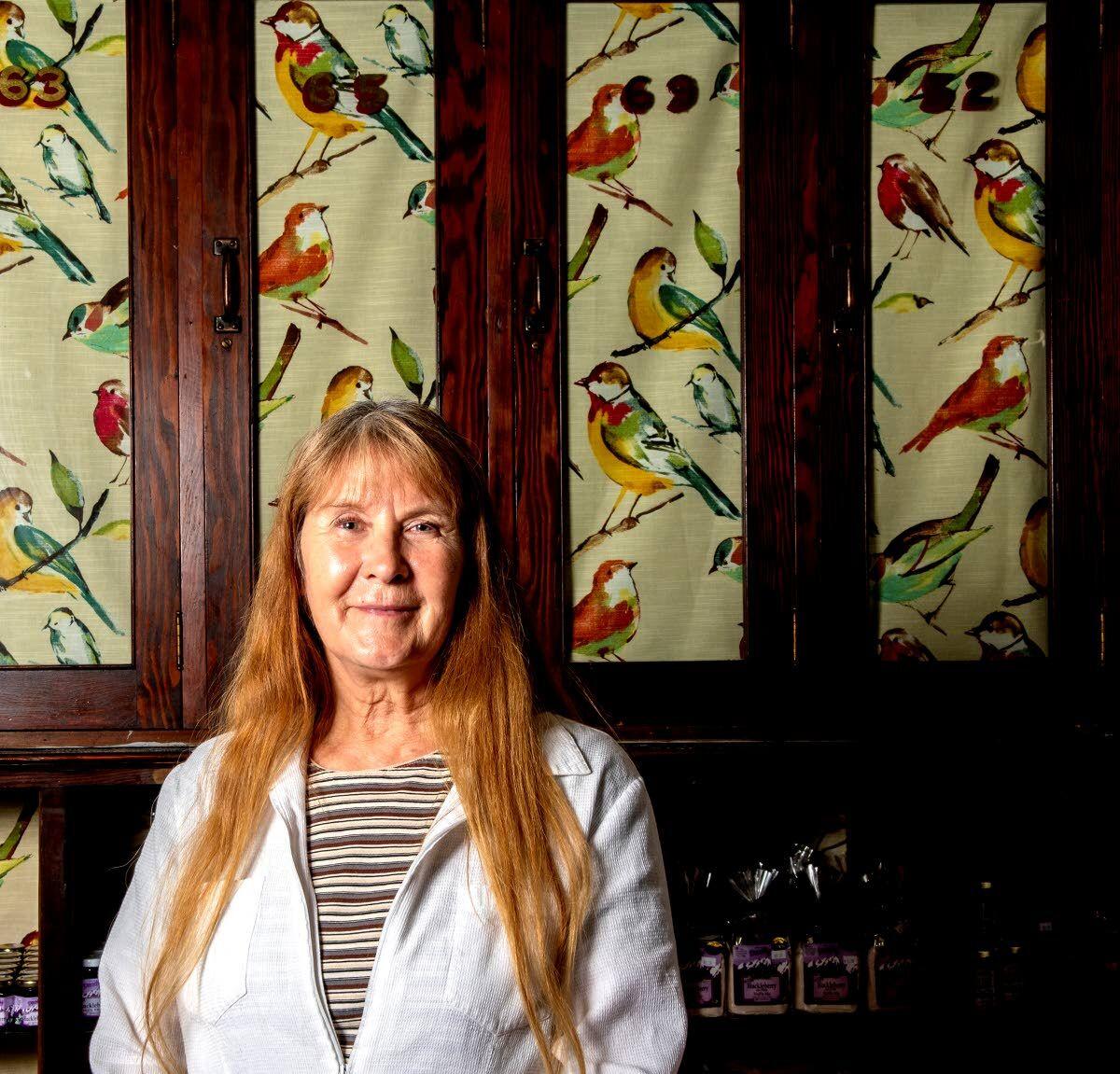 Vikky Ross stands in front of a cabinet last month her downtown Lewiston store, Idaho Memories Gift & Souvenir Shop. While the store was closed by the isolation period this spring, she homeschooled her grandchildren. 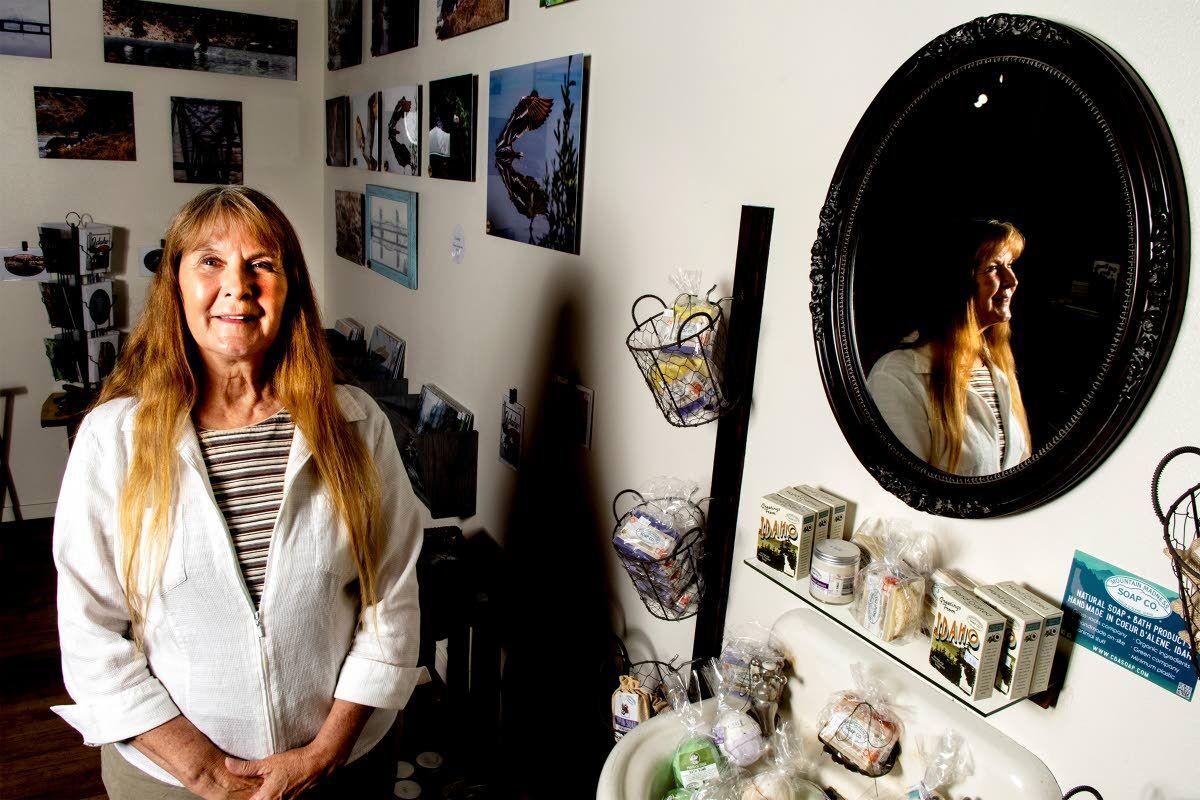 Vikky Ross is reflected in a mirror at her downtown Lewiston store, Idaho Memories Gift & Souvenir Shop, last month. Bath bombs and soaps are displayed on an antique sink below the mirror, and the photographs behind her are by a local photographer. While the business was closed for three months during the shutdown this spring, Ross homeschooled her grandchildren. 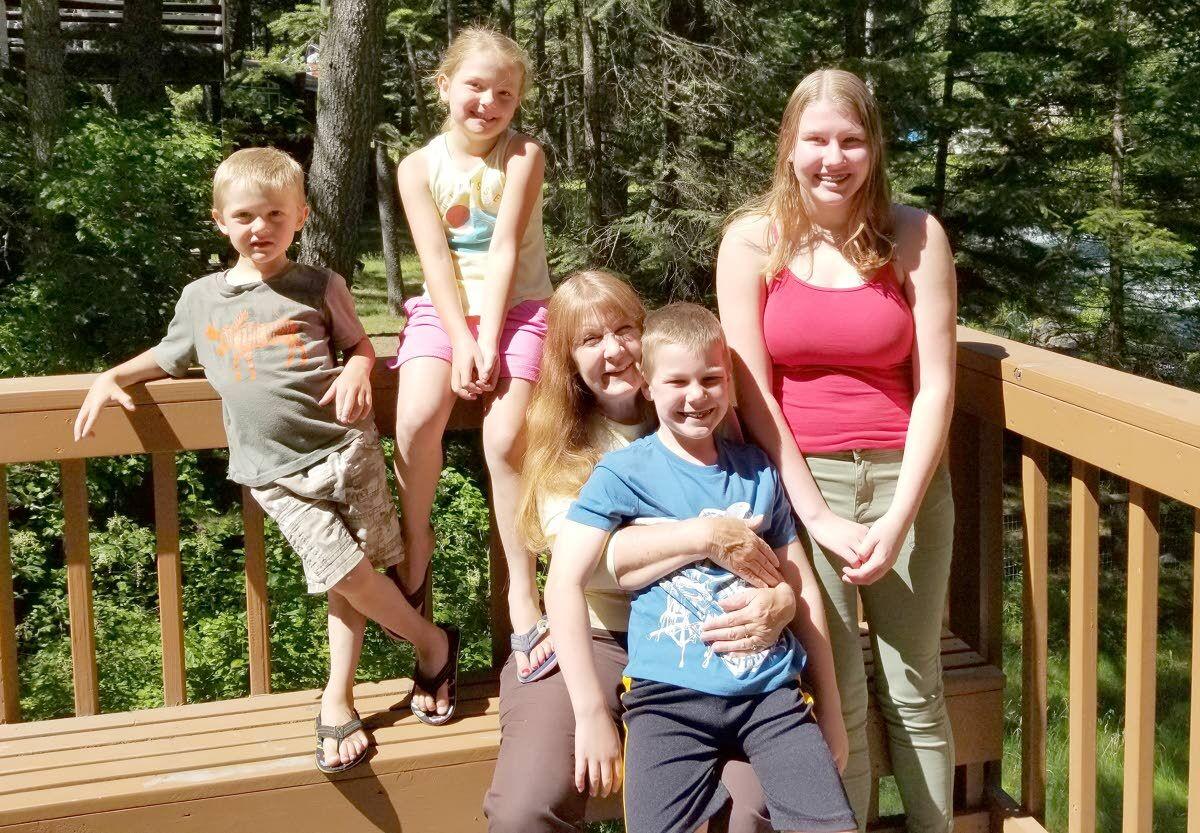 CourtesyVikky Ross sits with the grandchildren she homeschooled for three months during the COVID-19 isolation period. She is holding Travis Jensen, 8. Behind her, (from left) are Gunner Ross, 4, Rylin Ross, 6, and Malia Jensen, 14. Travis and Malia are the children of Matt and Kelli Jensen, of rural Moscow. Gunner and Rylin are the children of Justin Ross, of Moscow, and Stacie Ross, of Deary.

Vikky Ross stands in front of a cabinet last month her downtown Lewiston store, Idaho Memories Gift & Souvenir Shop. While the store was closed by the isolation period this spring, she homeschooled her grandchildren.

Vikky Ross is reflected in a mirror at her downtown Lewiston store, Idaho Memories Gift & Souvenir Shop, last month. Bath bombs and soaps are displayed on an antique sink below the mirror, and the photographs behind her are by a local photographer. While the business was closed for three months during the shutdown this spring, Ross homeschooled her grandchildren.

CourtesyVikky Ross sits with the grandchildren she homeschooled for three months during the COVID-19 isolation period. She is holding Travis Jensen, 8. Behind her, (from left) are Gunner Ross, 4, Rylin Ross, 6, and Malia Jensen, 14. Travis and Malia are the children of Matt and Kelli Jensen, of rural Moscow. Gunner and Rylin are the children of Justin Ross, of Moscow, and Stacie Ross, of Deary.

Vikky Ross’s dad always said she should be a teacher. She had the patience for it, he told her, and a voice that commands respect. In her early 60s, she decided to give it a whirl.

Her first teaching assignment was a three-month gig courtesy of COVID-19, with four students, all in different grades.

“It was a one-room schoolhouse,” she said.

The students were her grandkids. She held classes around the dining room table in her Moscow home after the pandemic closed their schools in Deary and Genesee and her business in downtown Lewiston.

“Prior to the school shutdowns, we knew that Idaho was going to be shutting down nonessential businesses,” Ross said, but she didn’t wait for the official March 22 order to close Idaho Memories Gift & Souvenir Shop. Situated on the F Street side of Newberry Square shopping mall, the store relies heavily on pedestrian shoppers.

So she locked up and assessed the situation. She was out of business; her grandkids were out of school; and her children, who still had work obligations, were about out of options.

It turned out to be a good learning experience.

First, she laid down ground rules: “I said, ‘You know, we’re gonna do this by the book, and I’m your teacher, I’m not “Grandma” when we do your schooling.’ ”

During school hours, Ross was to be known as Sister Mary Elephant, a nickname she borrowed from a 1972 comedy skit by Cheech and Chong. The levity helped balance her strict schedule. Their days included a regular start time, study periods, recess, snacks and art and exercise activities.

“I don’t think it would’ve worked any other way,” she said.

Before her students arrived each morning, Ross would go through each lesson plan and lay out supplies. She used the teacher-prepared packets from the kids’ schools as a framework for her lessons.

“For as quick as the school district had to put this thing together for online teaching — phenomenal job,” she said.

She sought further advice and inspiration from her future daughter-in-law, Jeanne Rodriguez, a K-12 art teacher for the Genesee School District, and “I had to fill in the blanks on exercise ... and some things to make it real fun for the kids.”

At the end of those first days of teaching, Ross was exhausted.

“We tried to keep humor and (keep) fear out of the children. This is something that they’re thrown into that’s way out of their comfort zone.”

That reality was brought home one day by a conversation with her grandson Travis Jensen, 8, of rural Moscow. “He said, ‘Grandma, I need to ask you some important questions: Are Nana and Papa gonna die from coronavirus?’ ”

Nana and Papa are Ross’s parents, Nick and Jeanette Hites, of Moscow. They are in their 80s, and thankfully in good health.

“He (Travis) just needed some assurance because this thing had come to town and thrown everyone’s plans around,” Ross said.

The children got along well and helped each other when the need arose.

“I didn’t have to hover over them,” Ross said.

A DREAM FULFILLED, HOPES FOR THE FUTURE

Ross reveled in the time with her grandkids and the chance to teach.

“I got a little smidgen of the satisfaction that a teacher must feel when they see that they’re making a little difference in a child’s life,” she said. “There’s a lot that goes with it. ... When you can help them figure out how to get (the answer) using their own brain power, it was awesome.”

Those three months gave her new respect for teachers (“give them a raise, they deserve it”) and for the overall school experience.

Her grandchildren were appreciative of her efforts, but the whole family hopes regular school will resume at month’s end.

“They all said (homeschooling) was OK. But they all, from 4 to 14, wanted to be in school,” Ross said. They missed their friends, doing class projects, band and extracurricular activities. “They missed that social aspect of it.”

Ross has since reopened her store, and business has been far better than she expected.

“The support from the community has been unbelievable,” she said.

Tourists are the bread-and-butter of a souvenir shop. So when the shutdowns began in March and some of the year’s biggest visitor draws — such as the college baseball tournament, Dogwood Festival, conferences and river boat traffic — were imperiled, “I thought, ‘You know, this is gonna hurt, and I’m gonna have to get creative,” she said.

She added more locally-sourced products, such as specialty coffee, homemade face masks and craft kits for kids, and she’s ready to launch her online store, where she will offer gift baskets.

Still, despite the setback to her business and the disruptions to life in general, she appreciates the precautions that were taken when the pandemic broke out.

“This virus came quick and had so many unknowns, it should have been treated aggressively,” she said. “So many people thought it was just another new flu virus, which it is. However, it has proven to be much more deadly.”

Her sister, Nikky Hites, who lives in rural Latah County, is immune compromised. Hites is a cancer survivor, “her lungs still hurt,” from a bout of pneumonia, and her doctor told her COVID-19 would kill her, Ross said. “So I’m taking it pretty seriously.”

And she trusts Idaho’s leaders to make the right decision on school this fall.

“I watch Gov. (Brad) Little closely. I think he’s got a real down-to-Earth understanding of what’s going on,” and is committed to getting kids back in school, she said. “But this virus has a mind of its own, and if it doesn’t allow this to happen, then I’m ready and willing to do the homeschooling again.”

A GRAND ADVENTURE MAY AWAIT YOU

Idaho and Washington school districts are finalizing plans for the coming school year. Should classroom hours be cut or schools reclose later this year, Ross encourages other grandparents who may be available to consider stepping into the teaching gap for their families.

“I would ask that they would please try ... because the kids really need that.”

“When you have a parent trying to be a teacher and do their (regular) work as well,” it puts a strain on the parent-child relationship, Ross said, and doesn’t make for an ideal learning environment.

Her son and daughter had periods during the shutdown when their employers allowed them time to be at home, but both told Ross they found teaching challenging, and they gratefully returned their children to Sister Mary Elephant’s classroom.

Her advice to teaching grandparents: “Don’t let them see you get overwhelmed, even if this means stepping outside for good deep breaths.”

And above all, create and maintain dual roles.

“They have to pull themselves out of being Grandma,” Ross said. “You’ve got to kind of remove yourself. You don’t get to roll around on the floor (with the grandkids) — unless it’s recess time.

CAREER: Businesswoman. She runs Idaho Memories Gift & Souvenir Shop out of Newberry Square shopping mall, which she owns jointly with her husband and twin sister, Nikky Hites, along with several other historical Lewiston buildings they have renovated. The Rosses owned Moscow Glass and Awning for 26 years before selling the business to their daughter and son-in-law in 2015.