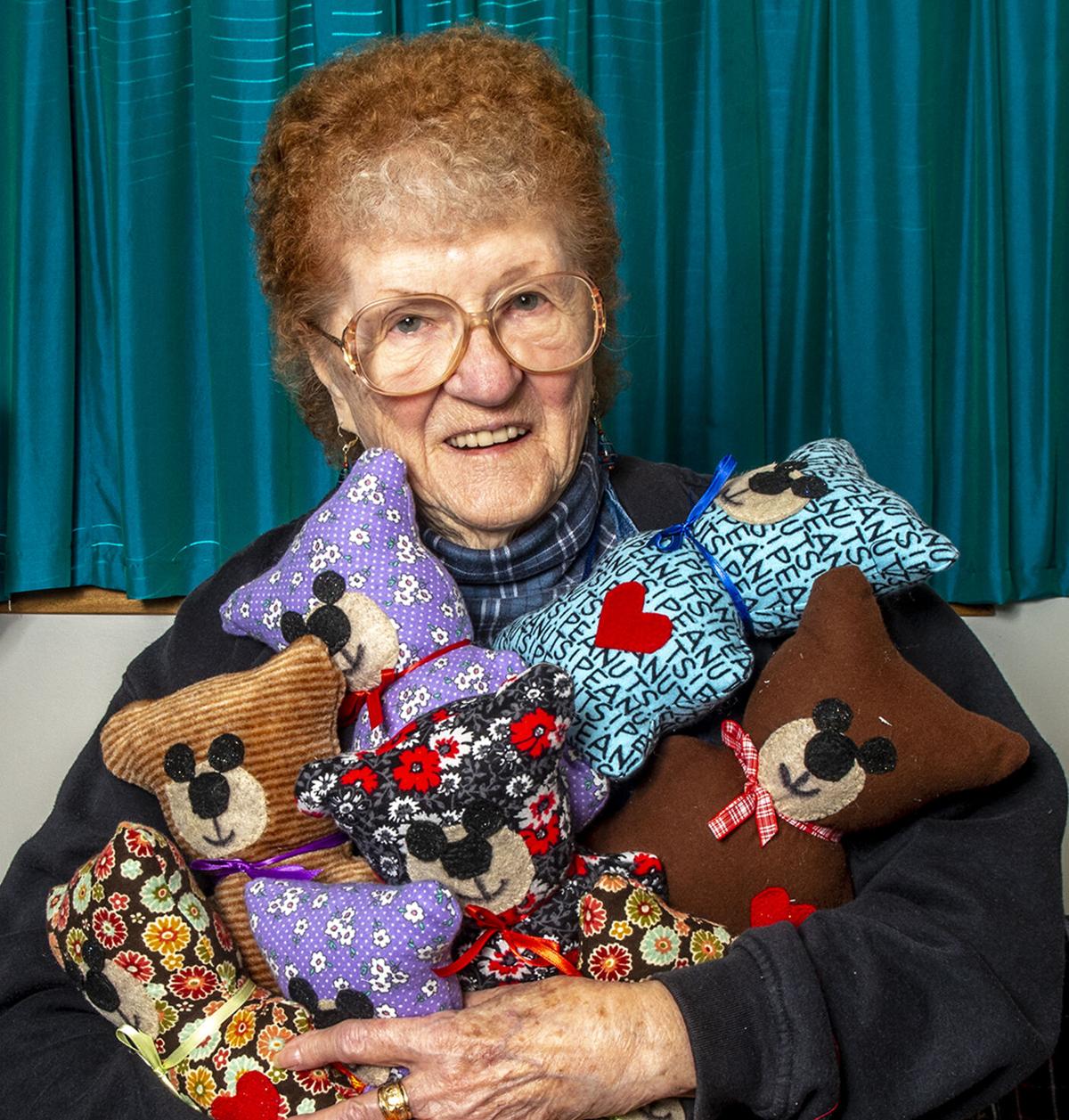 Jody Foster holds an armful of Hug-A-Bears she sewed last month at her Clarkston home. 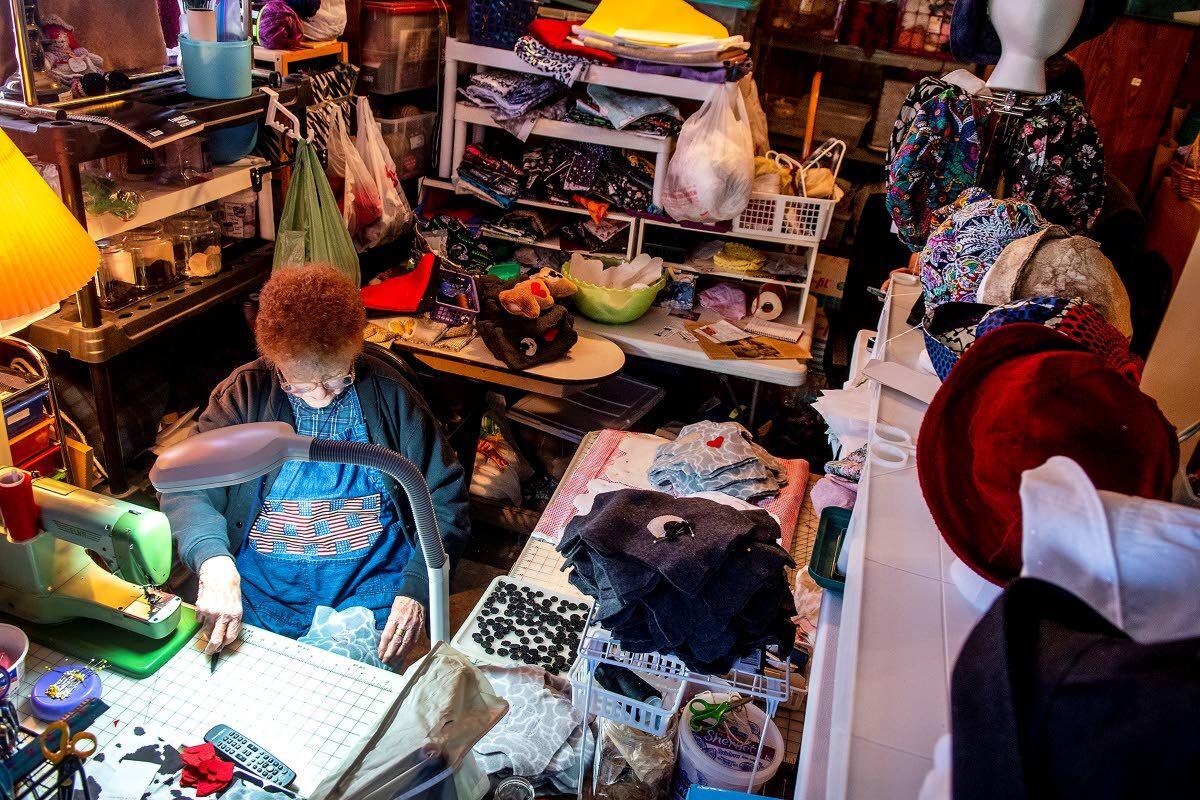 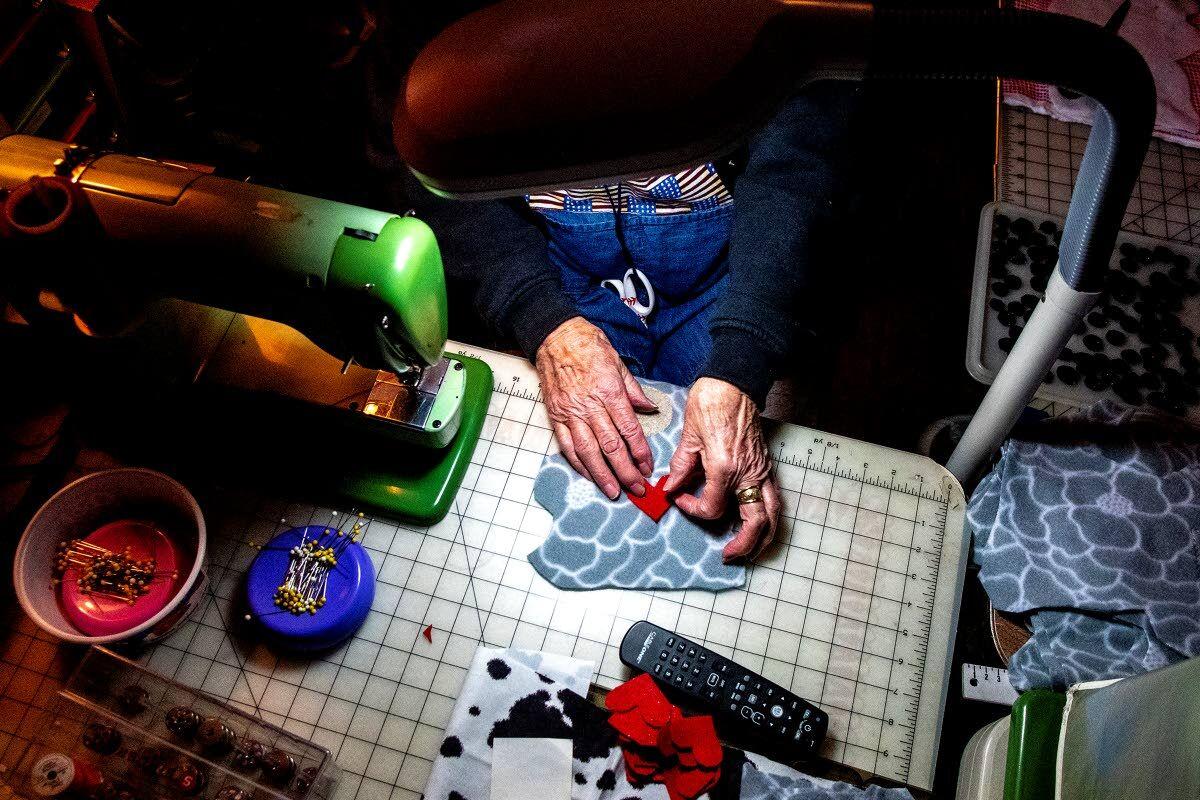 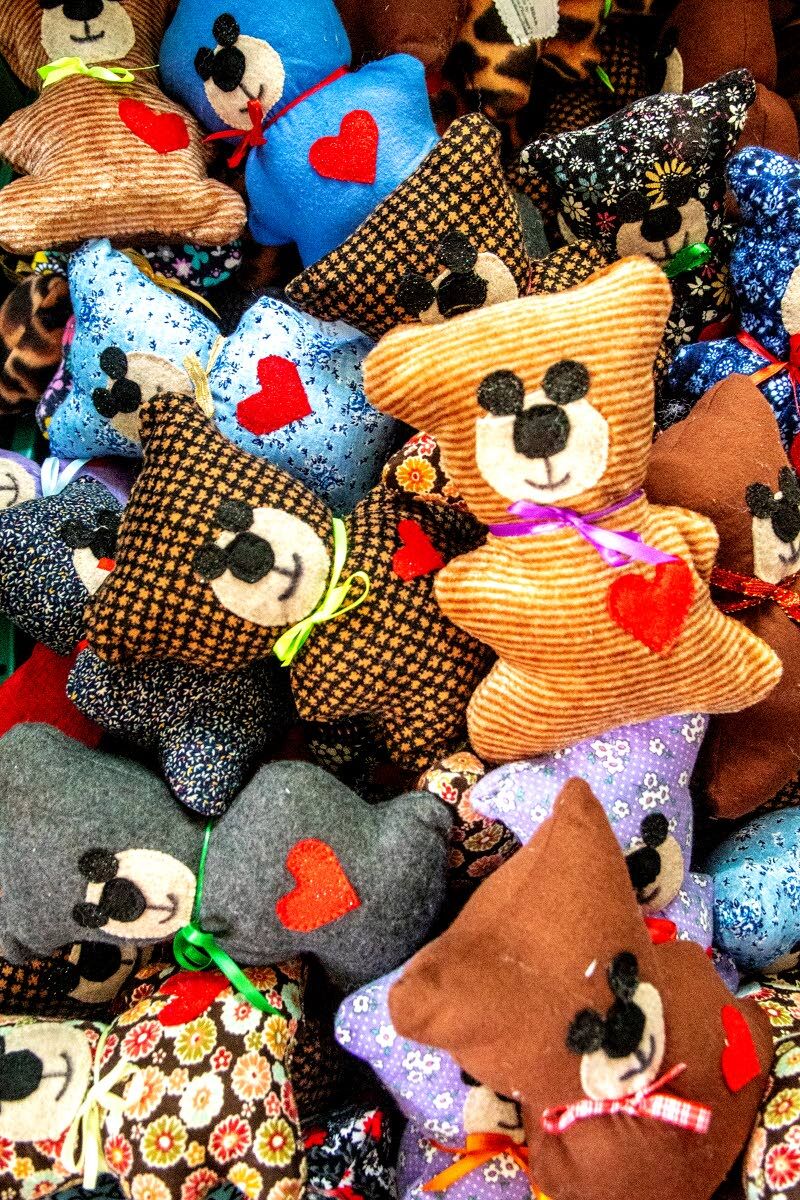 Hundreds of Hug-A-Bears sewn by Jody Foster sit in tubs last month in her Clarkston home. 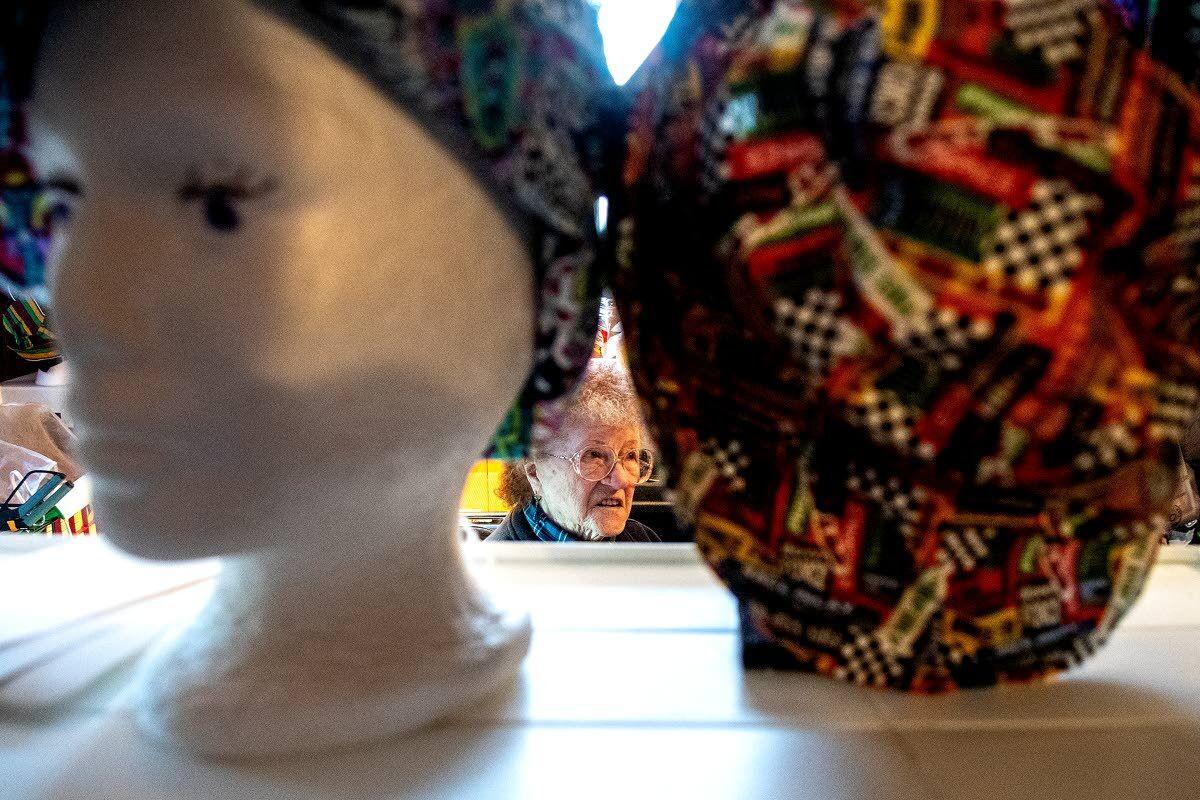 Foster is seen through mannequin heads wearing hats that she sewed. 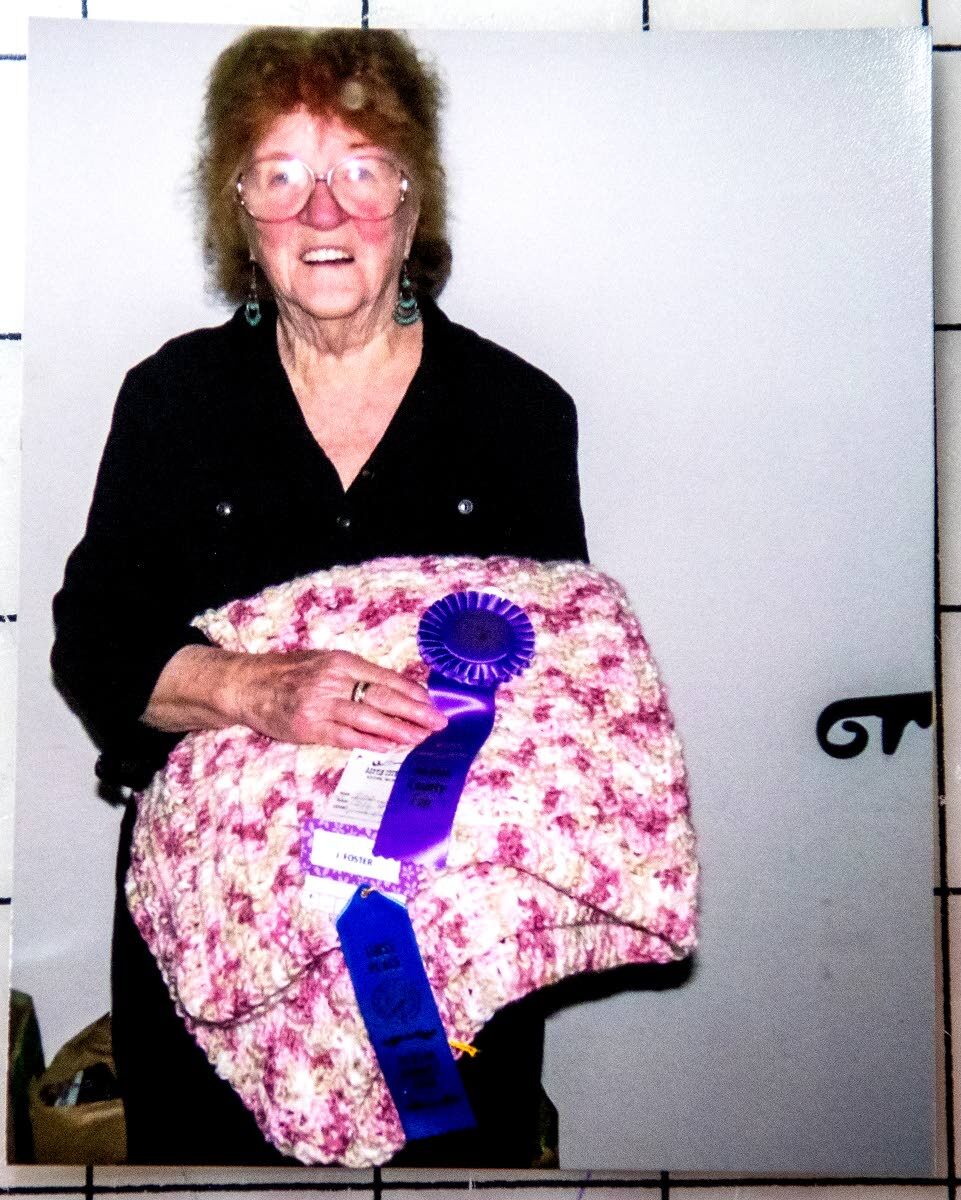 This snapshot shows Jody Foster with her quilt and best-of-show ribbon from the 2019 Asotin County Fair. 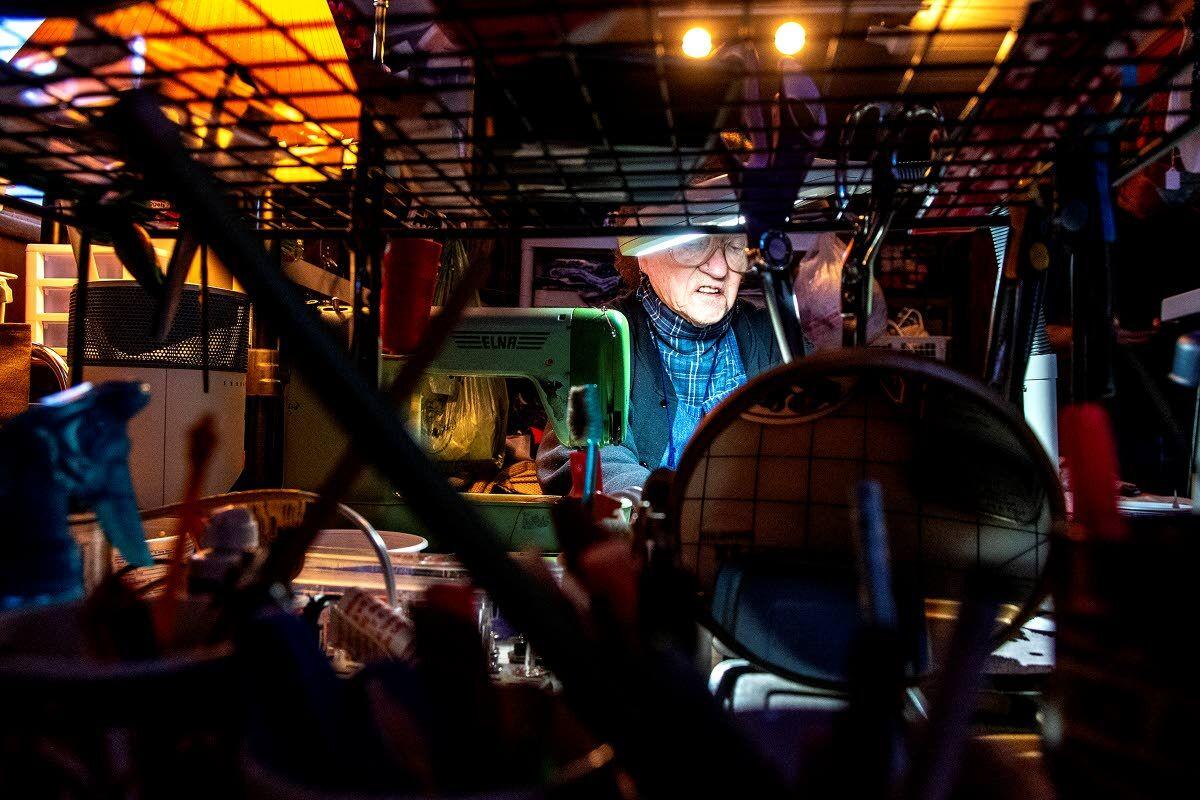 Jody Foster holds an armful of Hug-A-Bears she sewed last month at her Clarkston home.

Hundreds of Hug-A-Bears sewn by Jody Foster sit in tubs last month in her Clarkston home.

Foster is seen through mannequin heads wearing hats that she sewed.

This snapshot shows Jody Foster with her quilt and best-of-show ribbon from the 2019 Asotin County Fair.

Jody Foster of Clarkston ran the felt cut-out of a teddy bear through her sewing machine recently to attach a heart to its chest.

It’s just one step of many in the approximately four-hour process she follows to create a Hug-A-Bear. It’s a procedure she and her trusty 1958 Elna Supermatic have repeated some 15,000 times over the decades.

“It keeps me off the streets,” joked the 88-year-old crafter. “You just can’t sit and watch the tube all day.”

Foster doesn’t remember exactly when she started making the bears but said it likely was in 1977 or ’78, and she has maintained a pace of about 30 a month since then. Do the math, and it works out to more than 15,000.

The bears are donated to Tri-State Memorial Hospital and given to young patients as comfort aids. “They tell me the kids are really excited when they get them,” she said.

Her work with the Hug-a-Bears began as a project with the service organization the Telephone Pioneers. She and other members of the group were all employees of what was then Pacific Northwest Bell.

“All the girls were participating in it, and through the years — why — I kind of ended up as the only one making them,” she said. “Eventually I was the last old person doing it.”

Over the years, the Telephone Pioneers also donated bears to law enforcement agencies so officers could hand them out to traumatized youngsters they sometimes encounter.

Foster, on a tour through her basement crowded with crafting equipment and various projects, pointed to a bulletin board adorned with fair ribbons, including several purples.

“That is very, very good — winning a purple,” she said. “Those are best-of-show.”

She won her latest purple in the 2019 Asotin County Fair for an afghan blanket.

In addition to Hug-A-Bears, afghans and hats, she makes dish scrubbies, barbecue aprons and cardigan sweaters, among other things. She sells her wares at craft fairs and pumps the proceeds back into materials for the bears.

Foster is unsure how long it takes her to complete a bear because she makes 10 to 12 at a time in repetitive steps. For example she cuts out dozens of eyes, noses and hearts, plus the fronts and backs of the bears. Then she sews the eyes, noses and hearts to the fronts. Next she pins several fronts and backs together and then sews them.She said she has dozens of bears ready to be stuffed, one of the last steps.

She also had hundreds ready to be donated. One room is stacked with bins full of the bears and other crafts that have piled up. Foster wasn’t able to sell many of her wares last spring and summer because of COVID-19 restrictions that limited craft fairs.

“I have a whole dungeon full of crafts just sitting here.”