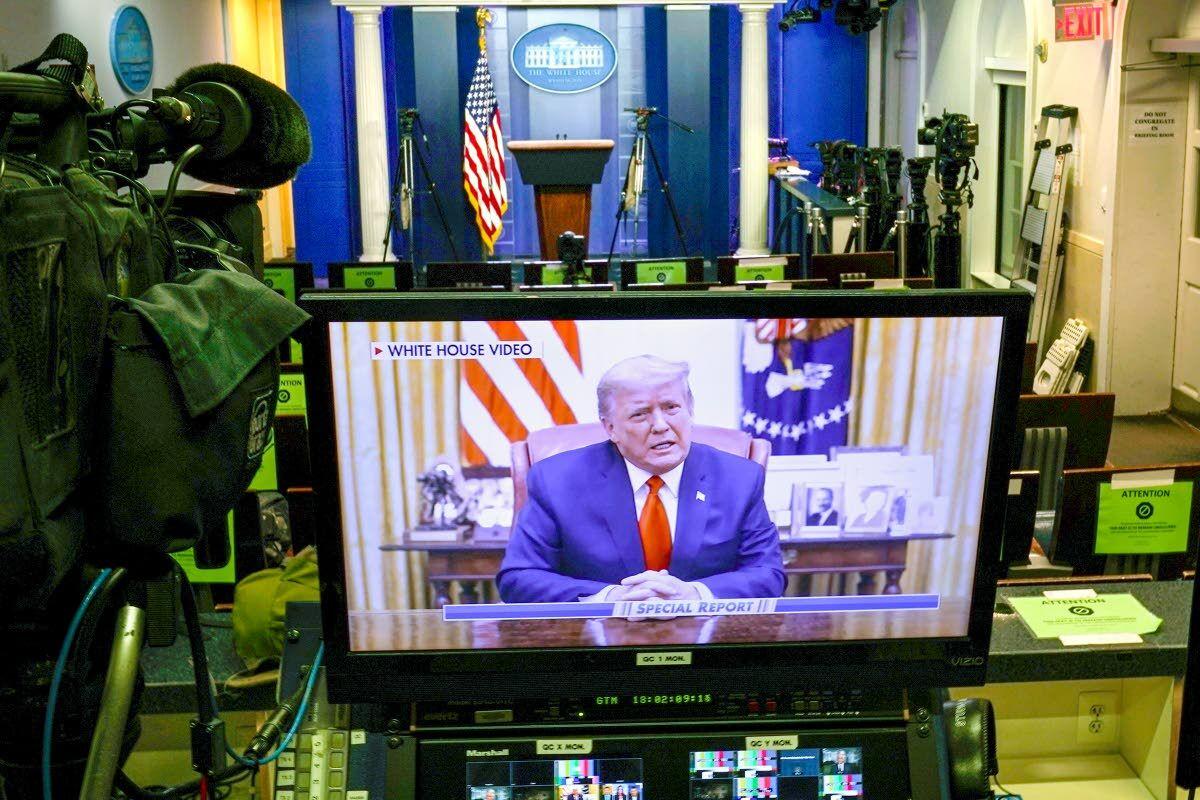 In a video released by the White House, President Donald Trump speaks about the tumultuous events of the past week. The video played Wednesday on a television monitor in an empty press briefing room at the White House in Washington, D.C., after the U.S. House impeached him. 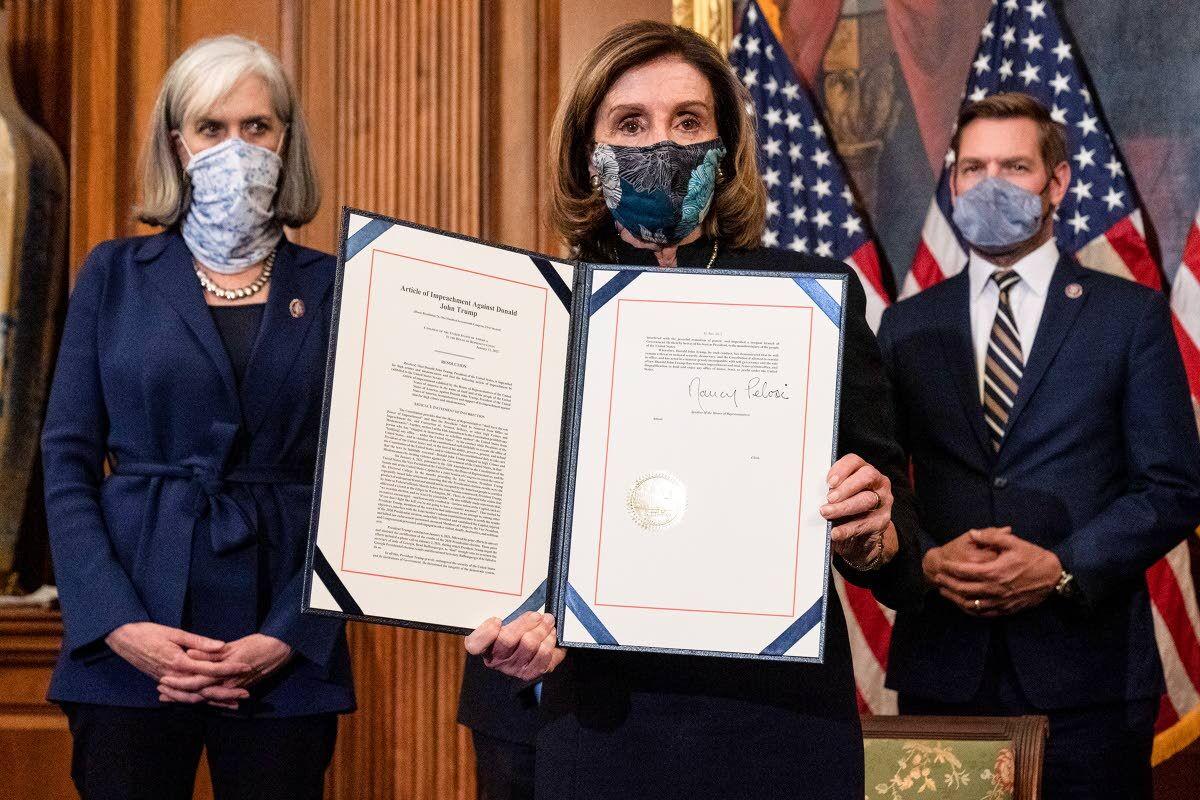 House Speaker Nancy Pelosi holds the article of impeachment against President Donald Trump after signing it Wednesday on Capitol Hill, in Washington, D.C. The article will now go to the U.S. Senate for possible trial.

In a video released by the White House, President Donald Trump speaks about the tumultuous events of the past week. The video played Wednesday on a television monitor in an empty press briefing room at the White House in Washington, D.C., after the U.S. House impeached him.

House Speaker Nancy Pelosi holds the article of impeachment against President Donald Trump after signing it Wednesday on Capitol Hill, in Washington, D.C. The article will now go to the U.S. Senate for possible trial.

WASHINGTON, D.C. — President Donald Trump was impeached by the U.S. House for a historic second time Wednesday, charged with “incitement of insurrection” over the deadly mob siege of the Capitol in a swift and stunning collapse of his final days in office.

It was a defining moment that will probably eclipse any policy accomplishments of Trump’s presidency — such as his tax cuts, deregulation of business and remaking of the federal judiciary — and illustrated how far he has fallen in the year since his last impeachment and trial, when all but one Republican in Congress stood by him.

Wednesday’s vote came exactly one week after the Capitol suffered its most violent assault since the British burned it in the War of 1812.

With the Capitol secured by armed National Guard troops inside and out, representatives voted 232-197 to impeach. The proceedings moved at lightning speed, with lawmakers voting just one week after violent pro-Trump loyalists stormed the U.S. Capitol, egged on by the president’s calls for them to “fight like hell” against the elec-tion results.

Trump is the only U.S. president to be twice impeached. It was the most bipartisan presidential impeachment in modern times, more so than against Bill Clinton in 1998.

The previous three impeachments — those of Presidents Andrew Johnson, Bill Clinton and Trump — took months before a final vote, including investigations in the House and hearings. This time it took only a week after Trump encouraged a crowd of his supporters who attacked the U.S. Capitol.

One casualty of last week’s Capitol siege seemed to be Trump’s iron grip on the GOP. Ten Republicans fled Trump, joining Democrats who said he needed to be held accountable and warned ominously of a “clear and present danger” if Congress should leave him unchecked before Democrat Joe Biden’s inauguration Jan. 20.

ALL EYES ON McCONNELL

In the U.S. Senate, which will take up the impeachment article next, Majority Leader Mitch McConnell has expressed openness to convicting Trump of impeachable offenses — a seismic signal to his caucus that could prod other Republicans to break with the president in the coming days and weeks.

While McConnell has remained largely silent since last week’s riot, those close to him have anonymously conveyed through media reports that he is ready to wash his hands of Trump and that he sees the impeachment process as a ready-made solvent.

McConnell believes that Trump committed impeachable offenses and considers the Democrats’ impeachment drive an opportunity to reduce the divisive, chaotic president’s hold on the GOP, a Republican strategist told The Associated Press on Wednesday. And McConnell told major donors over the weekend that he was through with Trump, said the strategist, who demanded anonymity to describe McConnell’s conversations. McConnell has told fellow Republicans he hasn’t yet made up his mind on how he would vote.

The Senate won’t begin a trial until next Tuesday, at the very earliest, which is the day before Democrat Joe Biden is sworn in as president. It’s unclear, for now, exactly how that trial will proceed and if any Senate Republicans will vote to convict Trump.

Even though the trial won’t happen until Trump is already out of office, it could still have the effect of preventing him from running for president again.

A look at next steps:

SENDING TO THE SENATE

Once the House votes to impeach, the speaker of the House can send the article or articles over to the Senate immediately — or she can wait a while. Speaker Nancy Pelosi hasn’t yet said when she will send them, but many Democrats in her caucus have urged her to do so immediately.

Pelosi has already appointed nine impeachment managers to argue the case against Trump in a Senate trial, a sign that she will send them sooner rather than later.

Once the articles are sent over — that is usually done with an official walk from the House to the Senate — then the majority leader of the Senate must start the process of having a trial.

If McConnell voted to convict, other Republicans would surely follow. But no GOP senators have said how they will vote, and two-thirds of the Senate is needed.

Still, some Republicans have told Trump to resign, including Pennsylvania Sen. Pat Toomey and Alaska Sen. Lisa Murkowski, and few are defending him.

Republican Sen. Ben Sasse has said he would take a look at what the House approves, but stopped short of committing to support it.

Other Republicans have said that impeachment would be divisive. South Carolina Sen. Lindsey Graham, long a key ally of the president, has been critical of his behavior in inciting the riots but said impeachment “will do far more harm than good.”

Utah Sen. Mitt Romney was the only Republican to vote to convict Trump in last year’s impeachment trial, after the House impeached Trump over his dealings with the president of Ukraine.

In the House, 10 Republicans joined Democrats in voting to impeach Trump, including Wyoming Rep. Liz Cheney, the third-ranking Republican. Every single House Republican voted against Trump’s first impeachment in 2019.

The Senate isn’t scheduled to be in session until Jan. 19, which could be McConnell’s last day as Senate leader. Once Vice President Kamala Harris is sworn in, making her the president of the Senate, and Georgia’s two Democratic senators are also sworn in, Senate Democratic leader Chuck Schumer will take charge and determine how the trial will proceed.

McConnell said he won’t bring the Senate back on an emergency basis to start the trial, so the earliest it could begin would be Tuesday. That means the trial is certain to take place after Trump has already left office.

If the Senate were to convict, lawmakers could then take a separate vote on whether to disqualify Trump from holding future office.

In the case of federal judges who were impeached and removed from office, the Senate has taken a second vote after conviction to determine whether to bar the person from ever holding federal office again.

Only a majority of senators would be needed to ban him from future office, unlike the two-thirds needed to convict.

This impeachment trial is likely to differ from the last one in many ways.

The House charges in 2019 on Trump’s dealings with the president of Ukraine, whom he urged to investigate Biden, came after a lengthy investigation and testimony from multiple government officials. While Democrats unanimously criticized the conduct and charged Trump with abuse of power, the charges wove together a complicated web of evidence.

This time, Democrats felt there was little need for an investigation — the invasion of the Capitol played out on live television, and most members of Congress were in the building as it happened.

Trump’s speech beforehand, in which he told his supporters to “fight like hell” against the election results, was also televised as Congress prepared to officially count the votes.

House Intelligence Committee Chairman Adam Schiff, who led the last House impeachment team, said the insurrection at the Capitol was an “impeachable offense committed in broad daylight, in which the whole country was a witness.”

He said the lightning-fast impeachment “was required by the exigency of the circumstances, and also made possible by the very nature of the crime.”

The four-page article of impeachment says that Trump “gravely endangered the security of the United States and its institutions of Government.”

It was introduced by Democratic Reps. David Cicilline of Rhode Island, Ted Lieu of California and Jamie Raskin of Maryland, all of whom have been tapped to serve as impeachment managers in the Senate trial.

The article says Trump’s behavior is consistent with his prior efforts to “subvert and obstruct” the results of the election and references his recent call with the Georgia secretary of state, in which he said he wanted him to find him more votes after losing the state to Biden.

Trump has falsely claimed there was widespread fraud in the election, and the baseless claims have been repeatedly echoed by congressional Republicans and the insurgents who descended on the Capitol.

As the protesters broke in, both chambers were debating GOP challenges to the electoral vote count in Arizona as part of the process for certifying Biden’s election win.

This article was compiled from reports filed by the Associated Press, Los Angeles Times and the McClatchy Washington Bureau.

Republicans who voted in favor of impeaching President Donald Trump