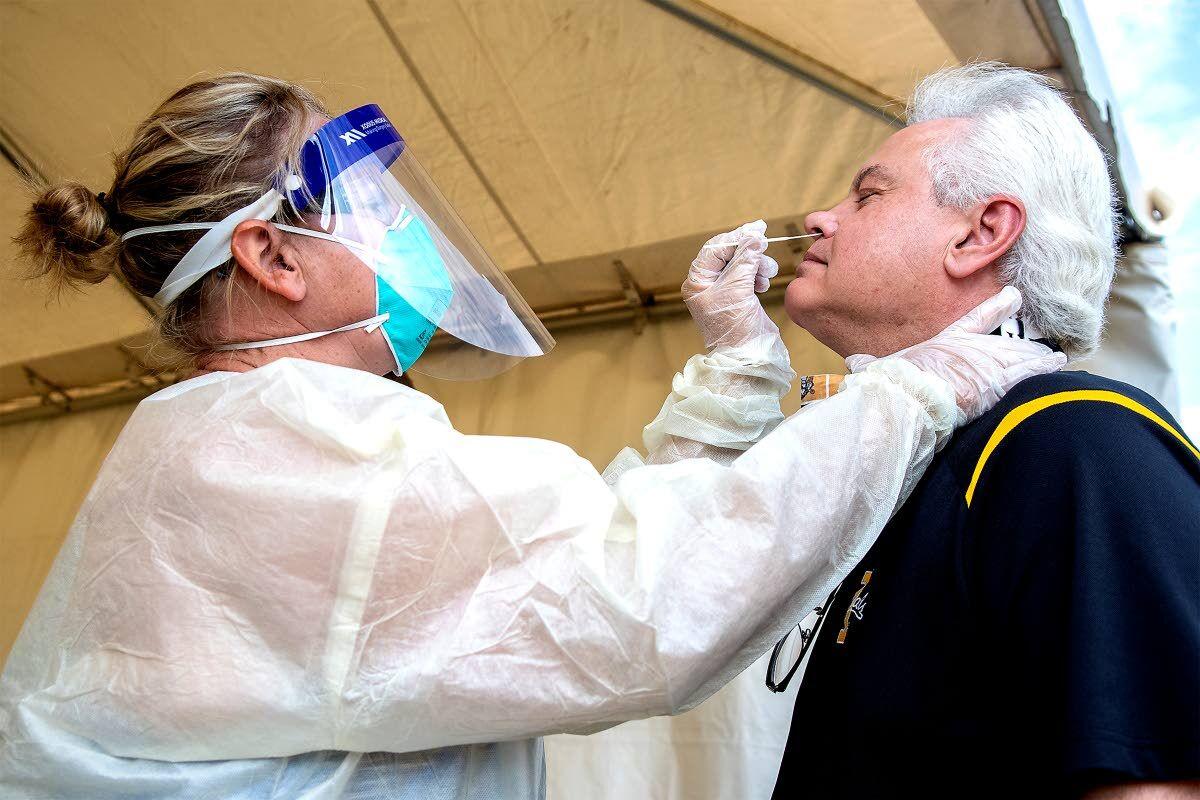 Alecia Hart pushes a swab into the nose of University of Idaho President Scott Green to test for COVID-19 on Wednesday during a trial run of how the university will test students as they return to campus next month. 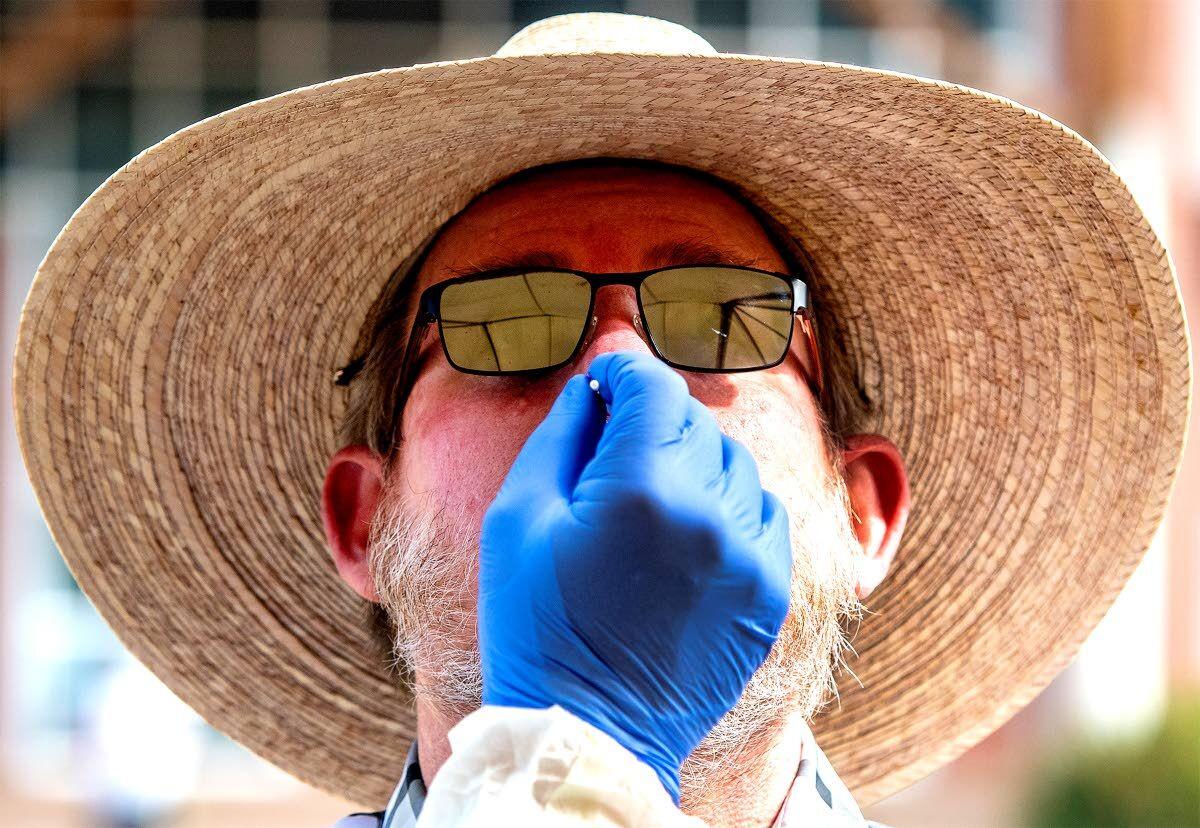 University of Idaho Dean of Students Blaine Eckles receives a cotton swab in his nose Wednesday during the trial run of the testing procedure. 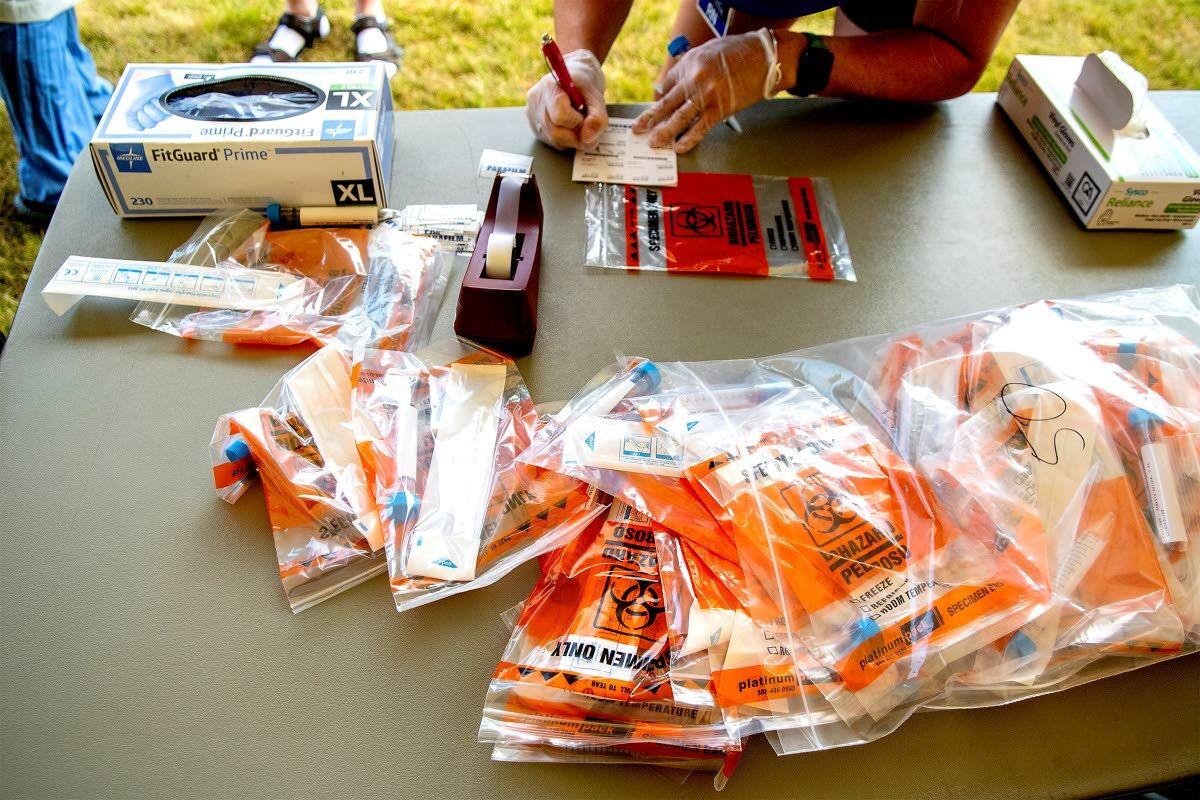 Bags of COVID-19 testing kits sit out on a table on Wednesday during a trial run of the testing procedure the University of Idaho will follow as students return to campus.

Alecia Hart pushes a swab into the nose of University of Idaho President Scott Green to test for COVID-19 on Wednesday during a trial run of how the university will test students as they return to campus next month.

University of Idaho Dean of Students Blaine Eckles receives a cotton swab in his nose Wednesday during the trial run of the testing procedure.

Bags of COVID-19 testing kits sit out on a table on Wednesday during a trial run of the testing procedure the University of Idaho will follow as students return to campus.

MOSCOW — After a successful practice run of its new in-house COVID-19 testing capabilities Wednesday morning, University of Idaho leaders say they plan for all students to be tested before the semester’s Aug. 24 start and results of those tests will be available in 24 hours.

UI Director of Communications Jodi Walker said the school decided early it would need to manage its own tests if it wanted to conduct them in high enough volume to allow students to return for in-person instruction in the fall.

“By that I don’t mean just the swabbing portion — in collaboration with Gritman Medical Center, we have set up our own lab,” Walker said. “We will be able to not only do the swabbing our students, faculty and staff need but we will be able to actually run those tests to shorten the time frame between testing and results.”

Walker said every student returning to the UI’s Moscow campus will be required to undergo a nasopharyngeal swab capable of identifying stray particles of coronavirus RNA before they may attend class in person or live in a residence hall.

In an email sent to UI faculty and staff Tuesday, UI President Scott Green reiterated the school’s commitment to returning to in-person instruction in the face of nearby Washington State University’s decision to conduct the fall semester online.

“This is only possible because we have made truly incredible progress working with healthcare experts and our partners at Gritman Medical Center to design specific safety protocols,” the message said. “We continue to implement a uniquely robust set of safety measures — including required testing of all students — to provide effective learning and work environments and a campus that is as safe as possible for students, faculty and staff.”

In order to assess the speed and efficiency of its new testing capability in a controlled environment, the UI asked for 50 volunteers to sign up for the trial run. About 120 signed up, Walker said. She said when volunteers set up on the lawn of the school’s Student Recreation Center on Wednesday morning, Green was the first in line to be tested. She said it went much faster than anticipated.

“It is a real test people will get real results but it really is being used as a test of what can we do — and it went great,” Walker said, saying the staff from Gritman administering the tests played a large part in the trial’s success. “That just helps us feel even more secure in this plan that yes, we can indeed test all students when they come back to campus.”

Walker said it is still uncertain just how many tests the UI will be able to process in a day, but the plan is to have students sign up for a schedule of tests as they arrive.

Most years, Walker said students don’t arrive on campus all at once but typically come in waves spaced out in the weeks leading up to the first day of fall classes. She said move-in day, traditionally a large-scale university event involving many volunteers, has been scaled back and split into five days to allow for better observation of social distancing guidelines.

She said testing will also be available to staff and faculty but will not be required.

There were five new cases of COVID-19 reported Wednesday by the Public Health – Idaho North Central District. There have now been 217 confirmed cases and 22 probable cases for a total of 239 in the district that covers Clearwater, Idaho, Latah, Lewis and Nez Perce counties.

One man and one woman from Latah County, one man from Nez Perce County and two women from Idaho County were reported with either a confirmed or probable case of COVID-19 in the district Wednesday.

There were no new cases, hospitalizations, nor deaths reported in Asotin, Garfield and Whitman counties in southeast Washington Wednesday.

The decision for whether someone is tested for COVID-19 ultimately falls to each person’s health care provider.

A health care provider can order a test for anyone they feel is appropriate to be tested for the disease, Public Health – Idaho North Central District spokeswoman Tara Macke said.

“It should be pointed out that the time for the test result to be returned may vary based upon the client being symptomatic or not, whether or not the client to be tested is severely ill or not and on the testing load of the laboratory that the test was sent to,” Macke said.

Test results can be returned within 48 hours or up to 10-12 days later. The delay makes it difficult to discuss patient status and makes contact tracing more difficult, Macke said.

“Contact tracing also suffers as the time of return of results lengthens out, recognizing that contacts to a positive case may be lost to follow-up, or best practice quarantine/isolation may not be observed due to a delay in time making contact with a case or a contact to a case,” Macke said.

The delays are because of an increase in the number of specimens being sent for testing that stresses the capacity of the commercial laboratories doing the testing, Macke said.

The CDC recommends anyone who is symptomatic to be tested for COVID-19 and the health district encourages symptomatic people to contact their primary health care providers to see if a test is appropriate, Macke said.

Anyone identified as a close contact to someone with a confirmed case of COVID-19 should rely on their primary care provider on whether to get a test.

Idaho reports there have been 5,982 COVID-19 tests administered to residents in the five counties in the Idaho North Central District since March on its COVID-19 website. There were 241 tests administered in March, 708 in April, 1,070 in May, 2,301 in June and 1,662 during the first 19 days of July.

As of Monday, there were 236 Idahoans hospitalized because of COVID-19 and 51 in an intensive care unit because of the disease. The most Idahoans in the ICU at one time, as reported by the state, was 57 on July 21.

Bloomsday Race organizers in Spokane announced they will not hold the in-person race that had been set for Sept. 20 this year and would instead hold a virtual race between Sept. 18-20 that will allow for the continuation of the race’s tradition of a finisher shirt.

Registrants who already signed up for the 12K on Sept. 20 will be moved to the Virtual Bloomsday race. Registration is open until Aug. 26 and costs $25. Those who want to register can go to www.bloomsdayrun.org.

Virtual Bloomsday allows participants to run any course, anywhere in the world for 7.46 miles between Sept. 18-20. Participants are then asked to report their finish times on the Bloomsday website. Finisher shirts will be mailed in late September to those who have submitted their time.