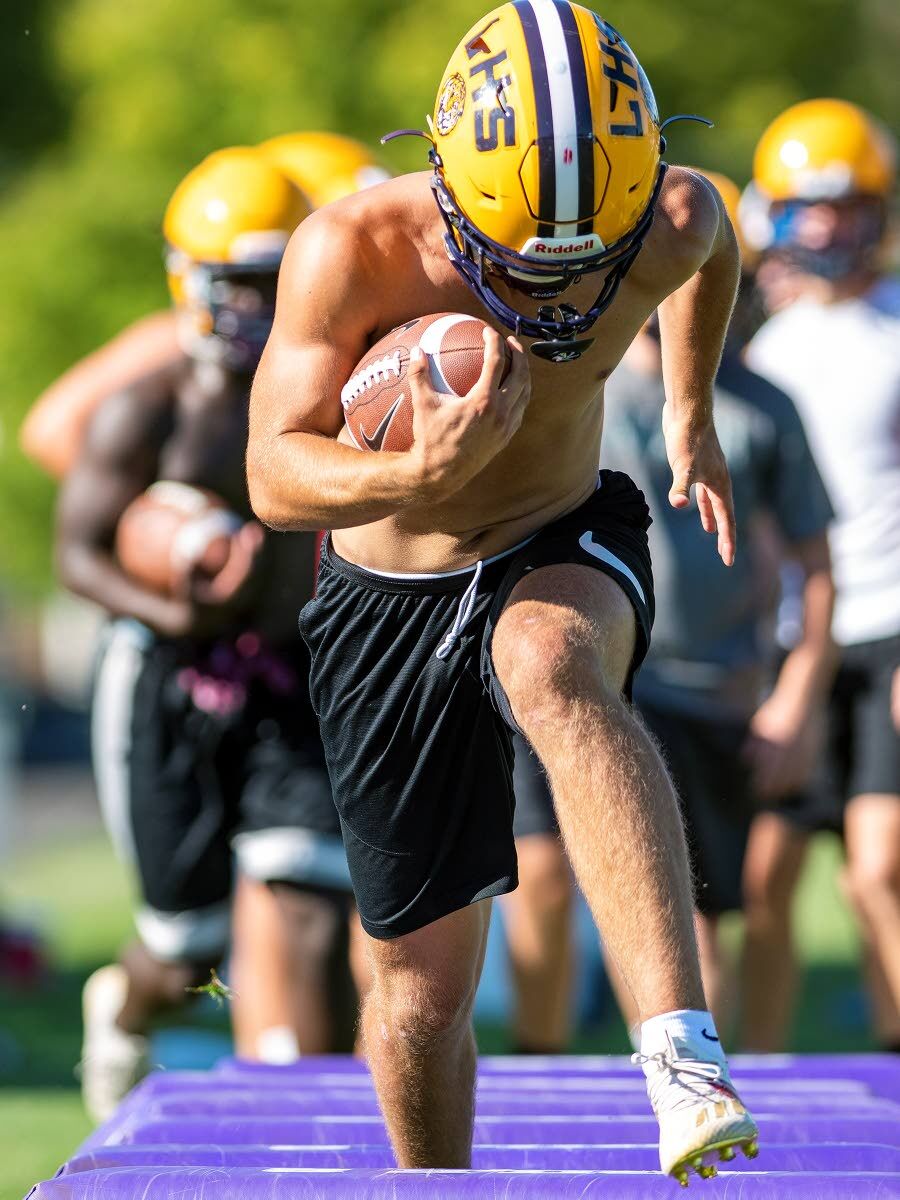 Lewiston High running back Cruz Hepburn goes through conditioning drills during the Bengals’ first practice of the season Monday at Sacajawea Middle School. 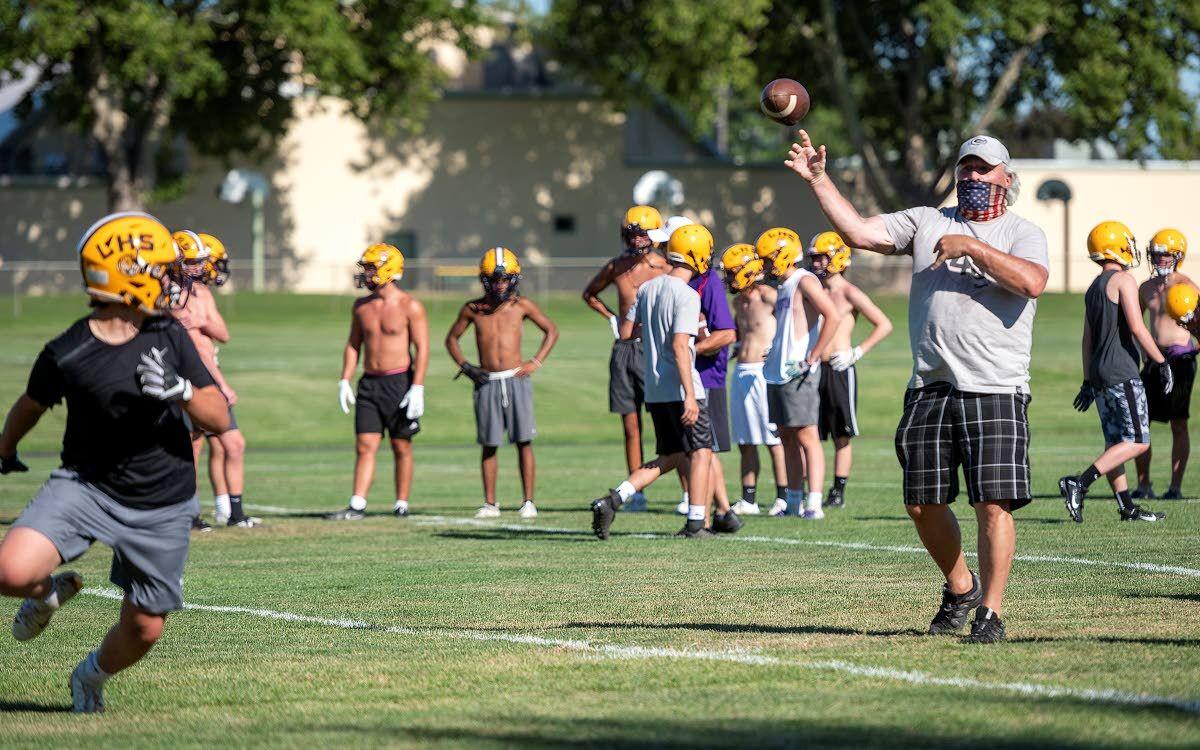 Lewiston head coach Mathew Pancheri tosses a football to a receiver as they practice route running on Monday during the team's first practice of the fall season at Sacajawea Middle School.

Lewiston High running back Cruz Hepburn goes through conditioning drills during the Bengals’ first practice of the season Monday at Sacajawea Middle School.

Lewiston head coach Mathew Pancheri tosses a football to a receiver as they practice route running on Monday during the team's first practice of the fall season at Sacajawea Middle School.

In this first week of preseason camp for Lewiston High School’s football team, the atmosphere is undeniably different from common practice of years past.

“If you’d seen a whole high school coaching staff wearing bandit masks on a football field, what would you think?” fourth-year Bengals coach Matt Pancheri said. “I mean, it’s not the same. They know it and we know it. It’s unprecedented, it’s new and a little chaotic.”

As practice gets underway for the Bengals — and around the state of Idaho — the aim will be to provide as normal an experience as possible, while adhering to “a lot of guidance, plus in-house stuff,” Pancheri said, referring to COVID-19 protocols.

“The best we can do here is follow the guidelines given,” he said. “There’s all kinds of recommendations. We’re following the CDC, the Nez Perce County, district guidelines. There’s so much we’re doing, but it’s still football, on the other hand.”

Lewiston’s staff has preached maintaining a safe distance when feasible at evening practices on Sacajawea Middle School’s field. Contact drills are limited to shorter periods, disinfectants are prevalent, temperature checks can be employed if necessary, and players have been split into smaller groups during morning weightlifting sessions and the coinciding teaching periods, which serve to install formations and plays.

During those early mental and physical exercises, linemen and skill-position players are separated, then broken up again by age groups.

“The younger guys go at 8 a.m., and the older at 9, then one goes into the classroom and one into the weight room,” Pancheri said. “They flip, in order to keep the numbers down.

“Every day we talk about the importance of social distancing, washing your hands, don’t touch your face and wear a mask. Let’s keep it moving forward in a safe way.”

The Bengals, coming off a 3-6 season (0-3 in Class 5A Inland Empire League play), have made scheduling moves to secure a respectable eight-game slate of opponents, replacing contests against three Washington high schools, which saw their fall seasons recently pushed to spring 2021.

Rather than playing a home game Sept. 18 against Yakima Eisenhower, Lewiston will host Moscow — two weeks before traveling to the Palouse to face the Bears. A Sept. 4 matchup at Spokane’s Mead High has become a nonleague game in Coeur d’Alene against IEL foe Lake City.

For the first time since the spread of the Spanish flu in 1918, the River Rivalry between the Bengals and Clarkston will not take place this calendar year. Lewiston had to take a bye week Sept. 11, knocking its schedule down one from the original nine planned games.

“I’m just trying to get ready for the next thing, approaching that Kuna game,” Pancheri said of Lewiston’s Aug. 28 season opener against the Kavemen, who went 13-0 last season, routing Blackfoot in the Class 4A final.

“We’ll do everything right on our end to make that game happen, and hopefully they can get through the issues down there and we’ll play that game, then worry about No. 2. I’m really one day a time. I wanna get through today safely with the kids, and hopefully do the same tomorrow.”

Although it’s still largely a period about evaluating potential varsity newcomers among a large turnout, Pancheri is certain of a few things three days into camp.

His team’s priorities will include locking down opposing rushing attacks, and reducing explosive plays yielded. Otherwise, he’s confident in his offense’s ground game, led by the elusive quarterback/running back combo of senior Kash Lang and junior Cruz Hepburn.

“Our two main goals are on defense,” Pancheri said. “... I really like our run game. That’ll be a strength. I think we’re awfully good at it.”

A pleasant surprise has been the physical growth Pancheri’s witnessed across his strong corps of upperclassmen, much of it induced by weight coach Shawn Nilsson’s instruction.

“A lot of kids came back a season later, having spent a year in the weight room, and they look like adults all of a sudden,” he said. “I sure like our (weight) program. Coach Nilsson has done a fantastic job with them.”