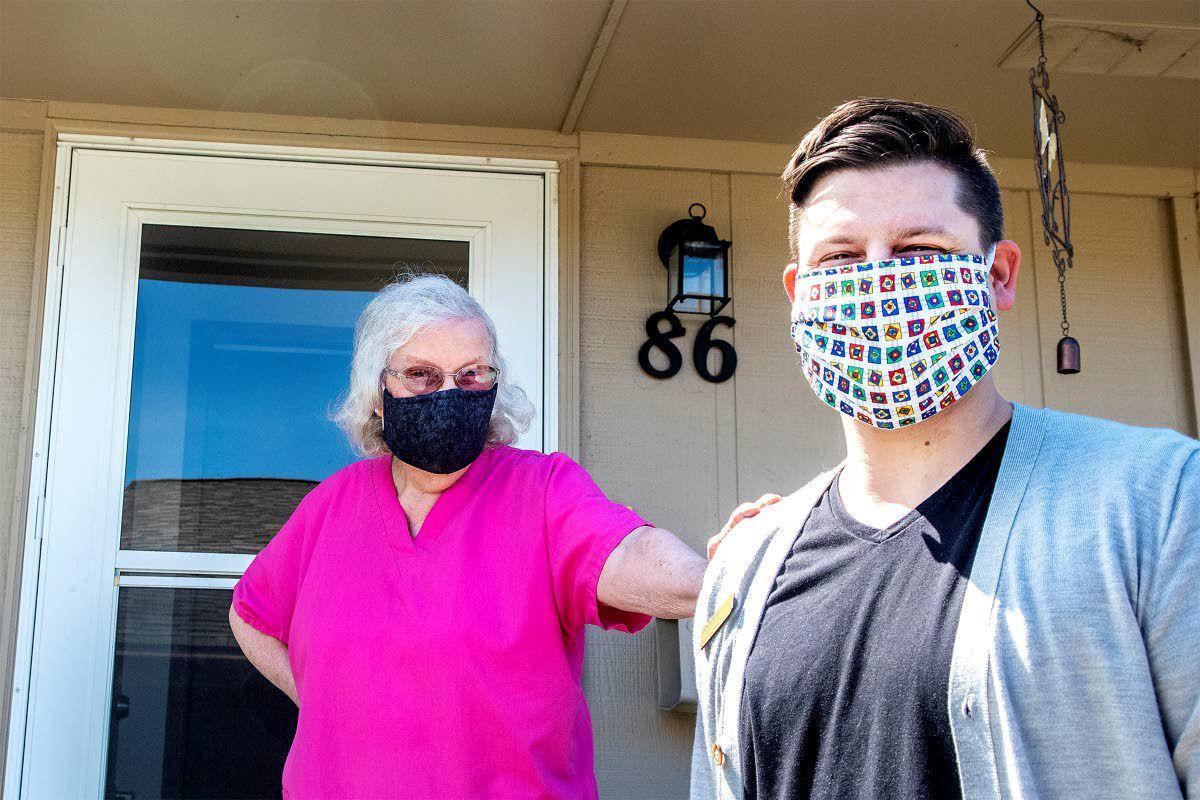 Susanne Hogaboam stands with Matthew Graham for a portrait in front of Hogaboam’s Lewiston home last month as Graham drops off the groceries he got for her at Rosauers Supermarket. 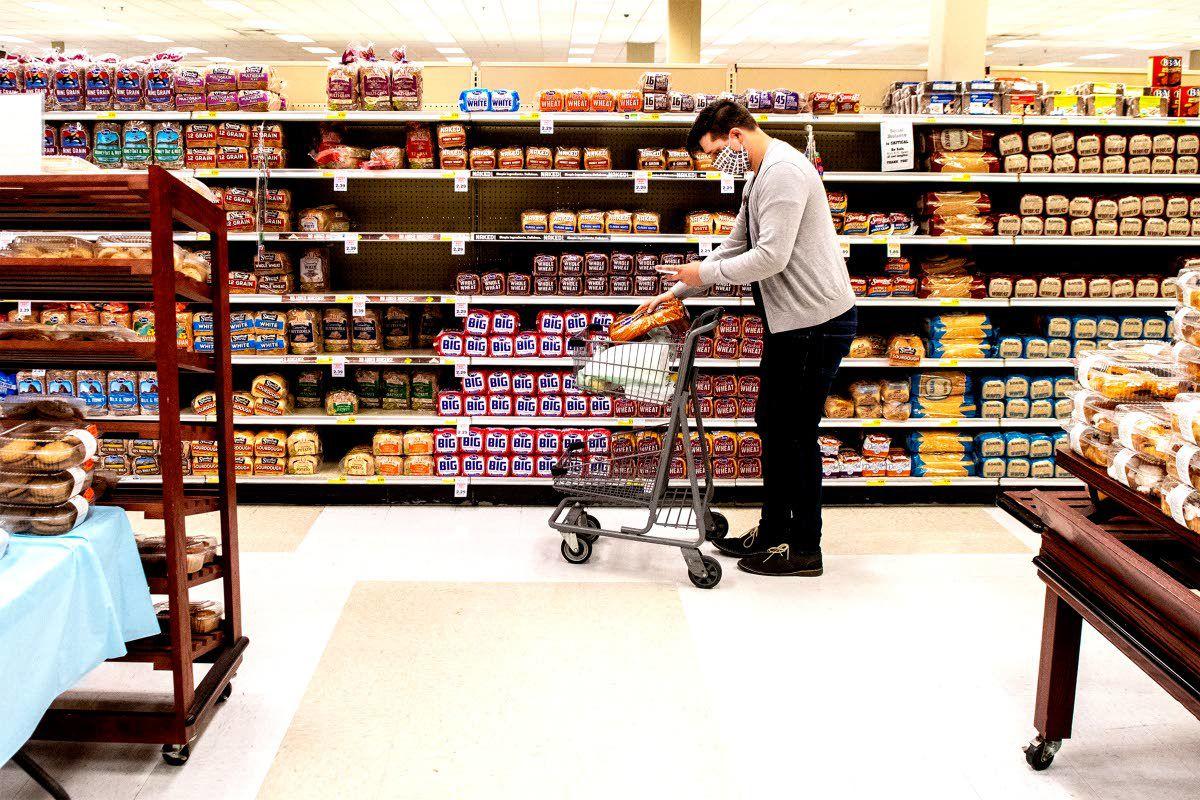 Matthew Graham places bread in the cart as he shops for Susanne Hogaboam on Tuesday at Rosauers Supermarket. 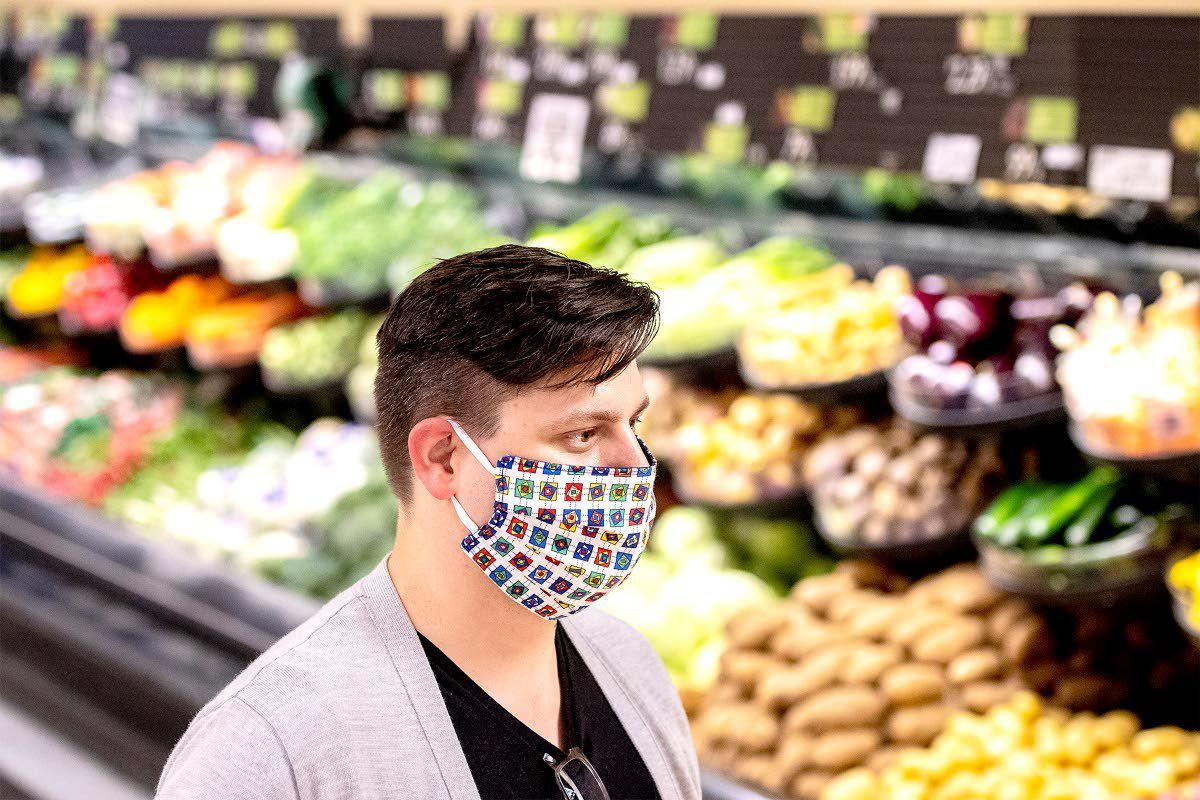 Matthew Graham waits for an order of donuts as he shops for Susanne Hogaboam on Tuesday at Rosauers Supermarket. 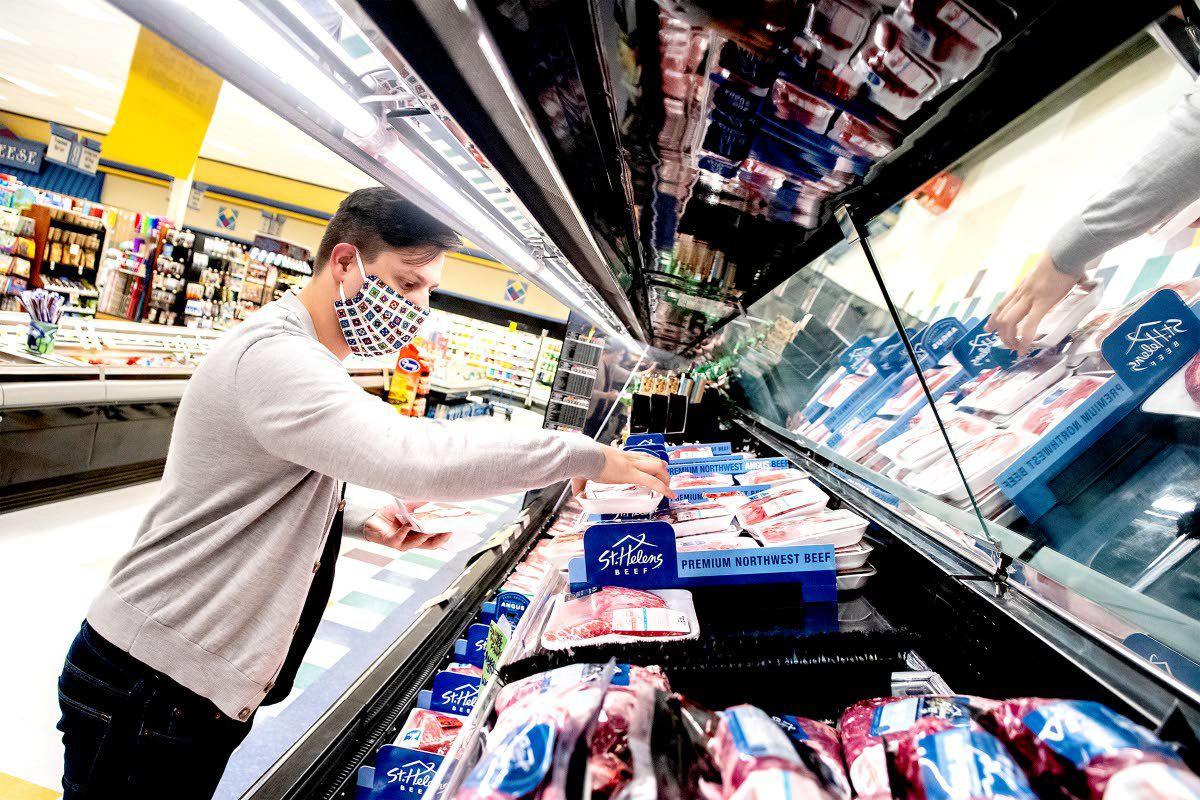 Matthew Graham picks out some beef as he shops for Susanne Hogaboam on Tuesday at Rosauers Supermarket in the Lewiston Orchards. 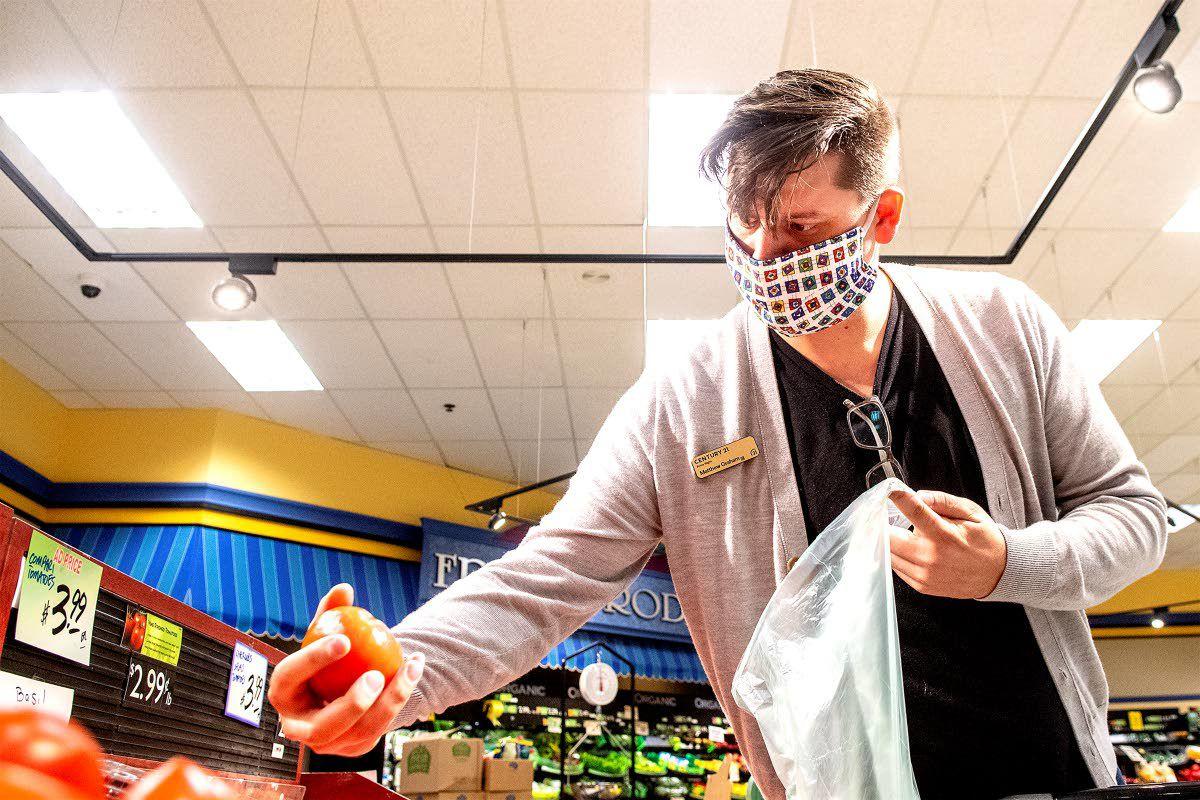 Susanne Hogaboam stands with Matthew Graham for a portrait in front of Hogaboam’s Lewiston home last month as Graham drops off the groceries he got for her at Rosauers Supermarket.

Matthew Graham places bread in the cart as he shops for Susanne Hogaboam on Tuesday at Rosauers Supermarket.

Matthew Graham waits for an order of donuts as he shops for Susanne Hogaboam on Tuesday at Rosauers Supermarket.

Matthew Graham picks out some beef as he shops for Susanne Hogaboam on Tuesday at Rosauers Supermarket in the Lewiston Orchards.

Giving up her driver’s license was the right thing to do, but Susanne Hogaboam couldn’t have guessed how much it would cramp her lifestyle.

“Golly, I’ve lost such a big freedom that I always took for granted,” she remembers realizing. “I still miss being able to just go to do certain things, and it is embarrassing to have to call people.”

Now — for items big and small — she can turn to her personal shopper, Matthew Graham.

The two recently were paired through the newly hatched Neighbor-to-Neighbor Grocery Shopping Program of Interlink Inc. The nonprofit organization is based in Clarkston and serves seniors who are 60 and older and anyone with disabilities who can’t drive themselves.

“Neighbor-to-Neighbor is our COVID-19 response to grocery delivery service,” said Interlink Transportation Coordinator Alisha Walker. “We assign one volunteer (to each homebound client) as a personal shopper.”

“This young man, Matt, who’s been helping me, we sort of clicked it off right away, and I’ve really enjoyed it,” Hogaboam said. “It’s been almost like having a grandson around.”

He is delighted to stand in for her family — two daughters and seven grandchildren who live in other states.

“She’s always so happy to see me,” Graham said. “I just love chitchatting with her (on her Lewiston porch, from 6 feet apart). She actually brightens my day. She’s so sweet.”

The past year was one of major changes for Graham.

“There’s no time like the present” has become his motto, he said. “Since I’ve turned 30, I’m much more about, ‘Just pull the trigger.’ ”

After 5 years as an executive assistant at Trident Seafoods on the Washington coast, he left his job last June to join his partner, Michael Jones, in Lewiston. He then trained with Century 21 to be a real estate agent, a job he’d been thinking about for some time.

“I like how dry it is,” Graham said. “Coming from Seattle, I enjoy the small town. I enjoy the slower pace of Lewiston — and it’s nice it doesn’t take me 45 minutes to go 4 miles.” Here, he can walk home for lunch each day.

With time on his hands, he began looking for opportunities to invest in his new community. His broker, Wendy Price, suggested he sign up as a volunteer with Interlink.

“The nice thing about being a Realtor is my schedule is very flexible,” he said,

For about two months — since Neighbor-to-Neighbor launched as a means to keep the Lewiston-Clarkston Valley’s most vulnerable citizens safe at home during the pandemic — Graham has been doing Hogaboam’s weekly shopping for food and medicine.

He’d like to do even more — if only he could convince Hogaboam to take him up on his offers.

“She hates to bother me,” he said.

Volunteers eager to lend a hand and clients reluctant to accept — it’s a common theme the staff hears at Interlink.

“People have trouble asking for help,” Walker said. “Being a burden is something people are really afraid of.”

Hogaboam, who will turn 77 next month, can relate. It’s a terrible thing to live an active life of service to others, then suddenly be unable to help yourself.

At age 16, she became a Benedictine sister at St. Gertrude’s Monastery in Cottonwood. For more than 10 years, she traveled throughout Idaho, teaching first- and second-grade students — large classes of “50 or 52 students.” She left the convent in her 30s “because of all the changes in the Catholic church.” In 1975, she took a job in Lewiston, washing dishes at the St. Joseph hospital, where she met Jim Hogaboam. They later married and raised their daughters in the valley.

Susanne Hogaboam had been troubled with occasional seizures, mostly petty maul, since an operation she underwent at age 24. One afternoon a few years ago, she suffered a seizure as she drove home from a hair appointment and had a bad accident. She knew it was time to stop driving.

For a time, she was able to walk from her apartment complex to do some shopping. But her unpredictable medical condition made her loath to venture too far afield. Finding herself wholly reliant on others for basic necessities, she tried spread her errands around so as not to wear anyone too thin. One lady took her shopping, but “I didn’t always want to rely on just that other lady to take me everywhere,” Hogaboam said.

When she learned of Interlink two years ago, she signed up and called for volunteers to fill in the gaps when she needed to go the medical and various other appointments.

Then her shopping lady, “who is also older” fell, and coronavirus restrictions struck.

“Usually I’m a stay-at-home sort of person anyway, but I think it’s the idea that I have to stay home that it bothers me so much,” Hogaboam said.

“It has been a wonderful thing,” she said.

Finding and juggling helpers is a common problem for the homebound.

The strength of Interlink’s free services, according to Walker, is its large pool of volunteers who have passed a background check and are trained.

Walker believes the need for the personal shopper program “is going to outlive the pandemic.”

“(Clients) can’t drive, so they’re kind of quarantined already,” she said. “Most of us just don’t think about it because we’re moving around ourselves, you know?”

“A lot of them don’t have family. There are other people that, their family just might not be able to help them,” she said. For folks in that situation, “We’re encouraging people to try this (service) instead for the pandemic.”

Walker also emphasized that volunteers truly want to help, so those in need of services shouldn’t hesitate to seek help.

“It goes both ways — it’s a mutual blessing, I like to say,” she said. “The volunteer is here to serve, and if you don’t ask for help, then there’s nothing for them to do."

Neighbor-to-Neighbor Grocery Shopping Program is a free service that connects homebound individuals with volunteer personal shoppers. Interlink Inc. is recruiting volunteers and clients. Asotin County and Nez Perce County residents 60 or older or anyone with a disability may enroll as a client.