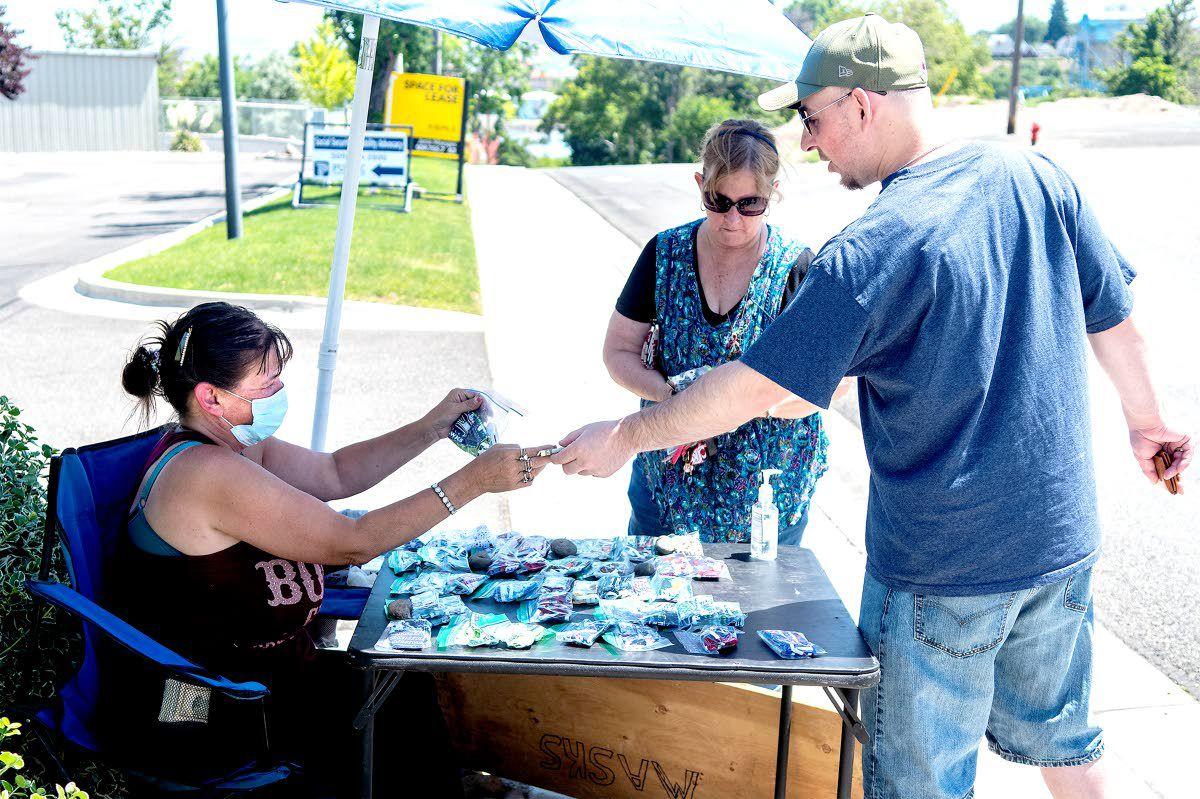 Bryden Dimmick and Laura Gratz purchase handmade masks from Dawn Daggett off Fair Street in Clarkston on Friday. Daggett has been making 300 to 400 masks per night and started started selling them in early March. Masks became required in many public settings Friday in Washington. 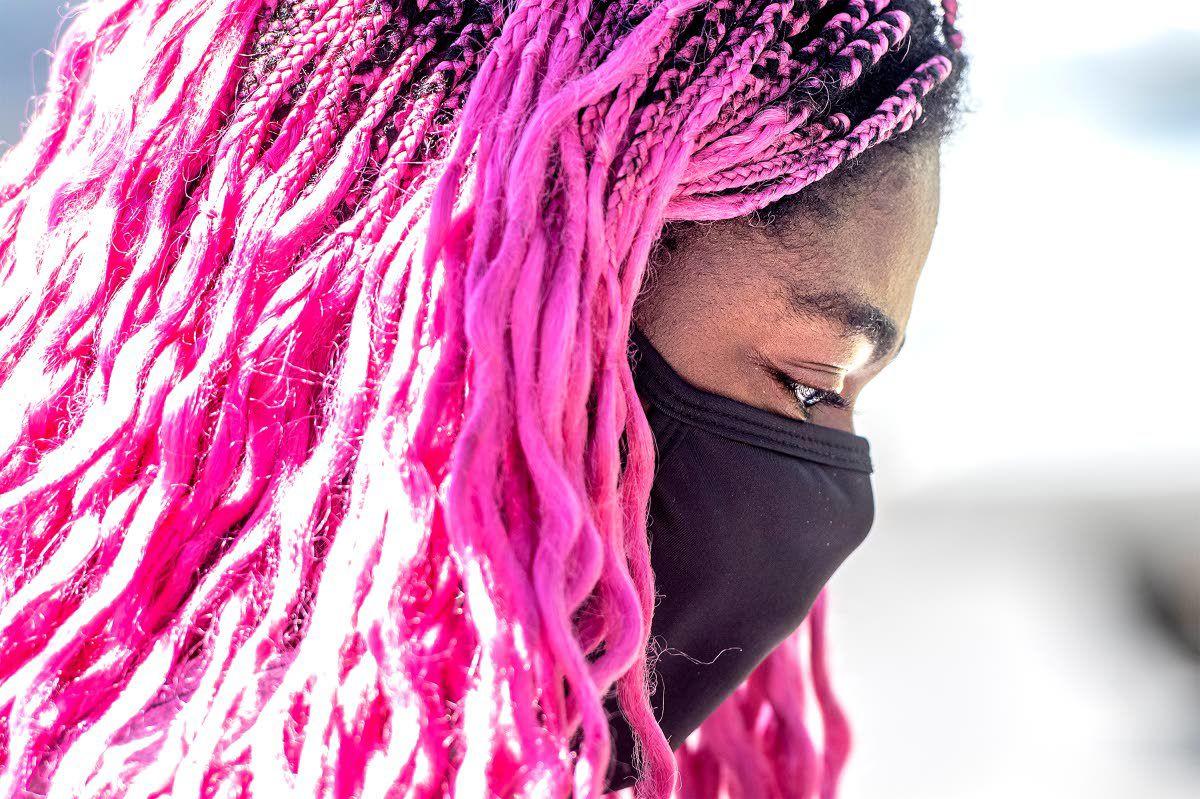 Naomie Julugbeh looks over a selection of handmade masks at Dawn Daggett’s curbside mask shop outside Costco on Fair Street in Clarkston on Friday. 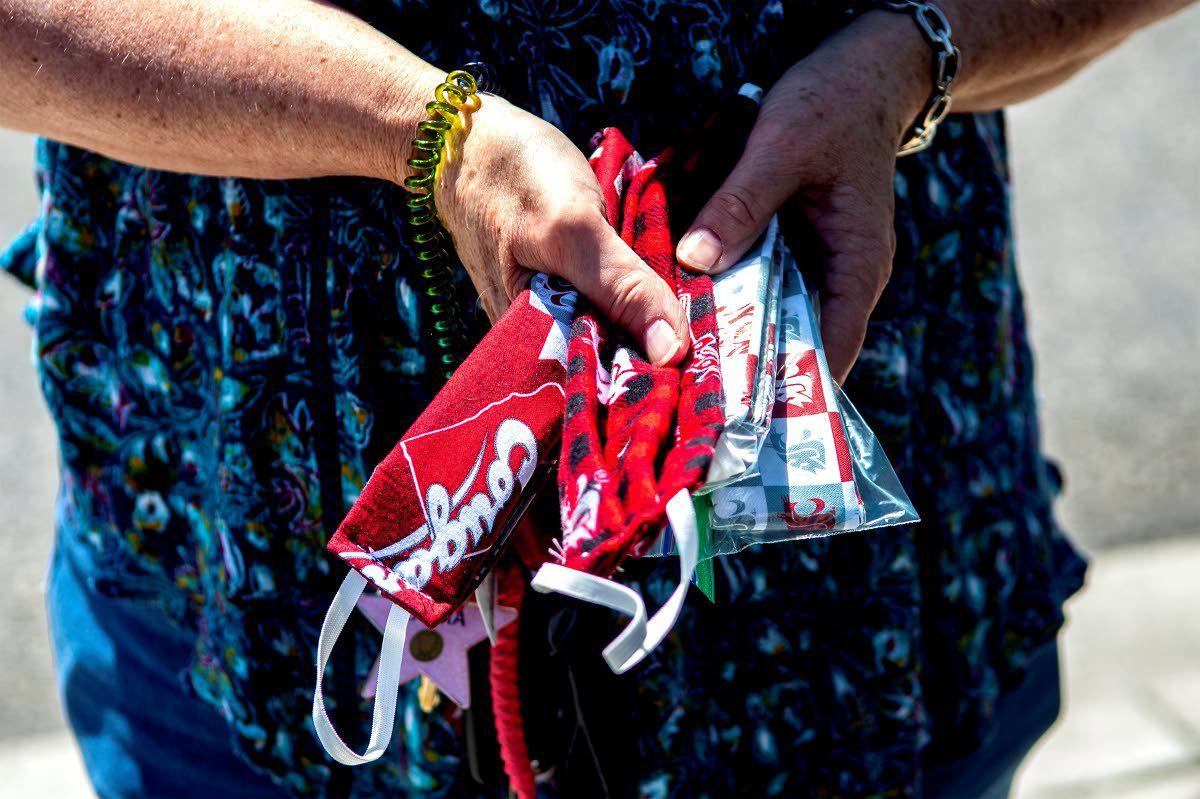 Laura Gratz holds the masks she purchased from Dawn Daggett in Clarkston on Friday. 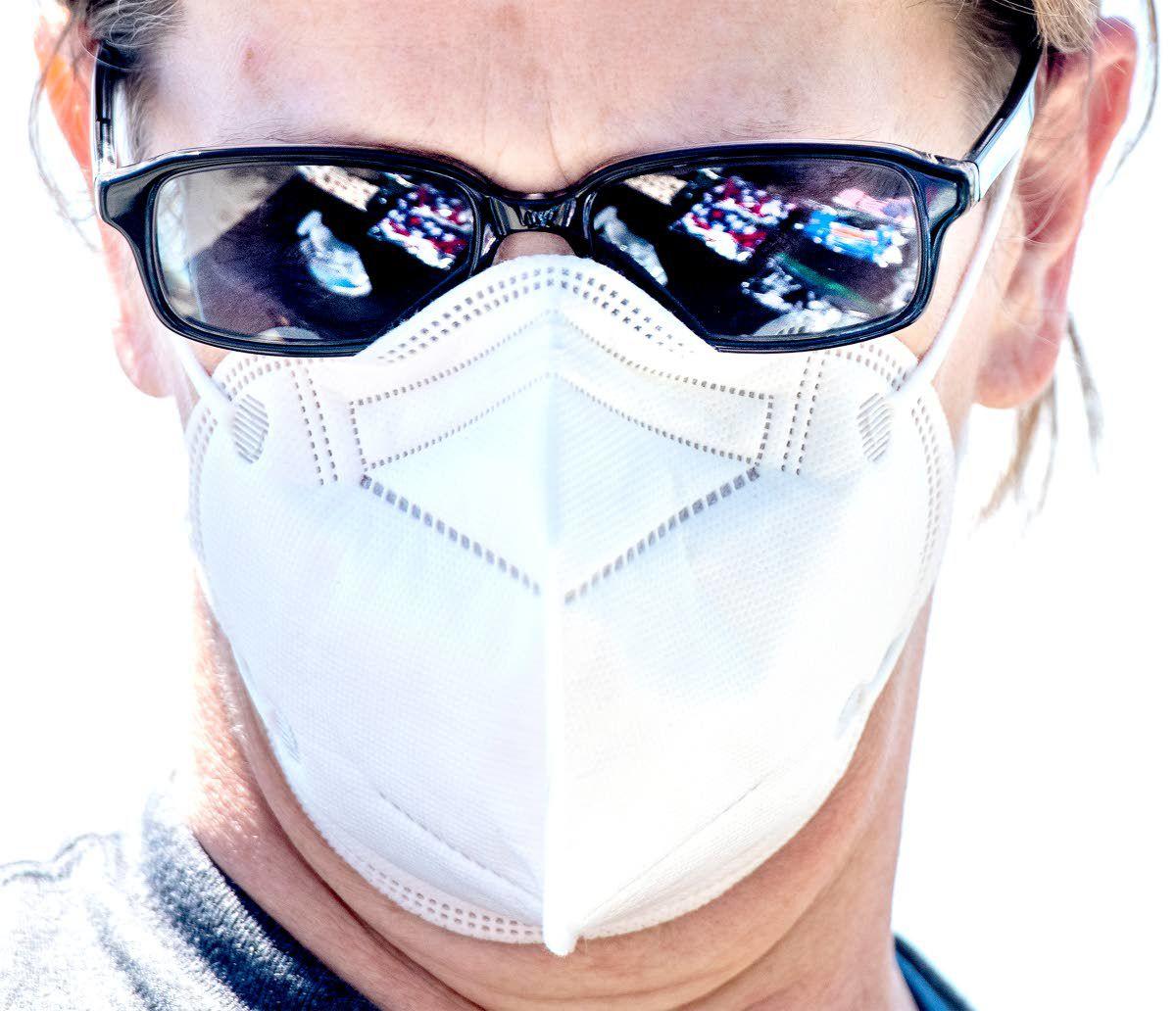 Melanie Lookabill looks over a selection of handmade masks on Friday in Clarkston.

Bryden Dimmick and Laura Gratz purchase handmade masks from Dawn Daggett off Fair Street in Clarkston on Friday. Daggett has been making 300 to 400 masks per night and started started selling them in early March. Masks became required in many public settings Friday in Washington.

Naomie Julugbeh looks over a selection of handmade masks at Dawn Daggett’s curbside mask shop outside Costco on Fair Street in Clarkston on Friday.

Laura Gratz holds the masks she purchased from Dawn Daggett in Clarkston on Friday.

Melanie Lookabill looks over a selection of handmade masks on Friday in Clarkston.

Washington residents were required to wear masks when in certain public settings for the first time Friday as part of an effort to slow the spread of COVID-19 that is on the rise in several western states, including Idaho.

The Gem State saw 282 new cases Friday, its biggest daily tally since the pandemic began. Most of those, 187, were in Ada County. Public Health – Idaho North Central District saw four new cases, including the first confirmed case in Clearwater County. The person in their 20s is isolating at home, according to a news release from the health district. There is one new case in Nez Perce County and two new cases in Latah County.

The first day of mandatory mask wearing in Washington went off without serious controversy but without total compliance. Most people out and about in Clarkston donned masks when they set foot in public spaces, either indoors or in outdoor settings where 6 feet of social distancing could not be guaranteed. But some shoppers who chose not to cover their faces at one business weren’t turned away.

Most people at the Clarkston Albertsons on Friday afternoon followed Gov. Jay Inslee’s policy. But some did not wear facial coverings, despite a sign on the store’s door asking them to do so.

Store management referred questions about its mask policy to the Safeway/Albertson Regional Headquarters in Bellevue, where spokeswoman Tairsa Worman said the health and safety of the company’s employees and customers is paramount.

“We require our associates and vendors to wear masks, and expect that our customers follow all applicable local and state regulations with respect to face coverings for their protection and for that of our employees.”

Worman didn’t respond to follow-up questions asking what the company does when customers don’t comply with health regulations or how allowing shoppers to dodge state regulations keeps its employees and other customers safe.

Brady Woodbury, administrator of the Asotin County Public Health District, said the mask requirement applies to individuals — and while businesses can refuse service to those who don’t comply, they are not compelled to do so.

“You are still violating the governor’s order if you are in the business (without a mask) and you can’t ensure 6 feet of social distancing at all times,” Woodbury said. “So generally speaking, if you go inside a business and you’re a member of the public, you should have a mask on.”

He noted that businesses are required to ensure their employees are wearing masks and those who don’t could be fined by the Washington Department of Labor and Industry.

Yakima County, where cases have risen sharply, is the only one where businesses are required to have their customers wear masks based on the statewide order.

“The Clarkston Police Department will continue to focus on education and engagement regarding state orders related to COVID-19,” Hastings said. “We will communicate with citizens to educate them on the facial covering requirement and encourage them to follow directives of the governor and local health officials.”

Matt Plemmons, owner of Greenfield Co., a Clarkston cannabis store, said his customers didn’t appear to have a problem with the mask regulation.

“We had one customer come this morning and he just walked out and went across the street (when told he needed a mask.) Everyone else has been pretty well on board with it,” Plemmons said.

Despite the sharp rise in cases in parts of Idaho, Lewiston will host three events this weekend where large groups of people are expected to gather, some from far-flung locations. They include Brewfest at the Nez Perce County Fairgrounds, a tent revival at Echo Hills Church and a fastpitch softball tournament.

St. Joseph Regional Medical Center said the large events are prompting it to cancel visitation at the Lewiston hospital.

“With several larger events planned in our community, some of which will bring in a significant number of travelers from out of the area, St. Joe’s is taking extra precautionary steps to help ensure the safety of everyone at our facility,” company officials said in a Facebook post.

A large counterculture gathering in the Nez Perce-Clearwater National Forest that peaks over the Fourth of July holiday appears to have changed locations. The Rainbow Gathering that was slated to be held in the upper Lochsa River basin now appears to be centered in the Riggins area near the divide between the Snake and Salmon rivers at Cow Creek. However, U.S. Forest Service officials were unable to confirm the location of the gathering that typically draws several thousand participants.

Concern over COVID-19 has caused many longtime participants to pledge to stay home this year, which could drive down the number of revelers. Some who are boycotting are even asking that it not be referred to as a “Rainbow” gathering.

“The Rainbow Family has made it pretty clear that we do not support this gathering and do not wish to see our family blamed for it,” said Gary Stubbs, a longtime participant from Napa, Calif.