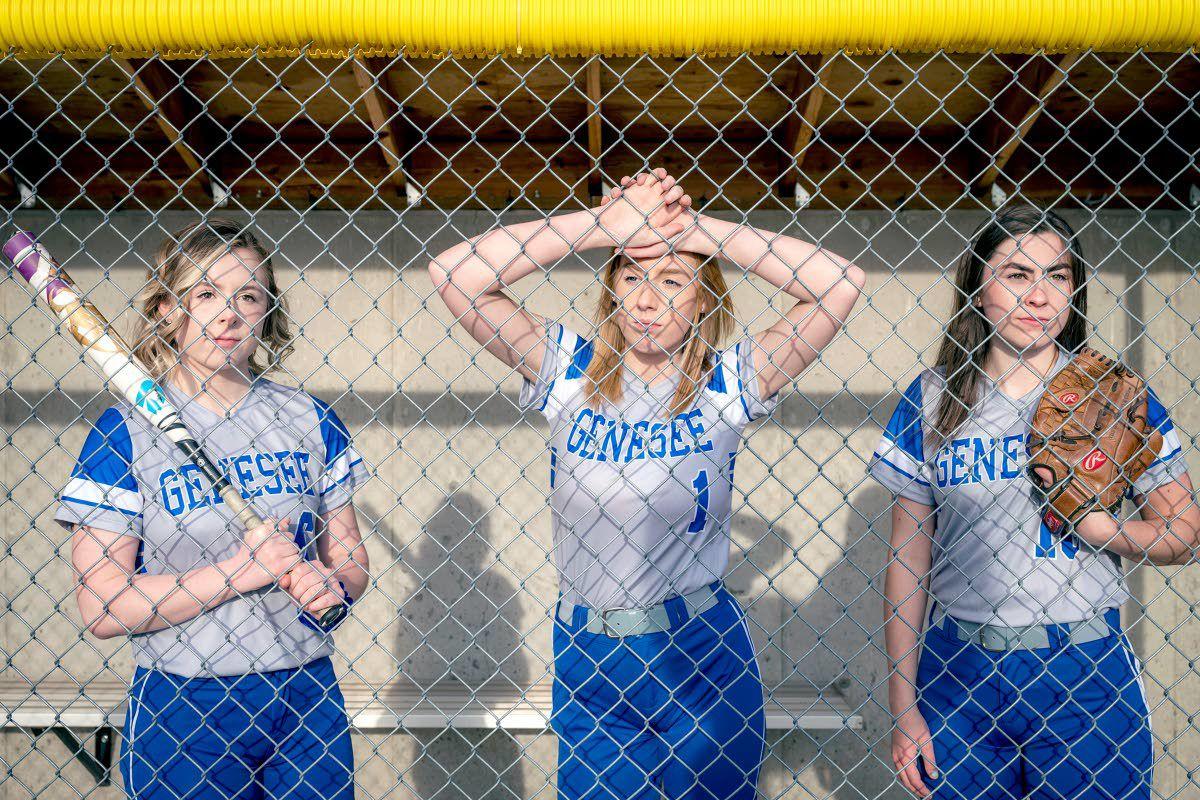 Pete Caster/TribuneGenesee senior softball players Mikacia Bartosz (left), Kassie Cass (center) and Regan Zenner pose for a portrait inside a dugout at the school’s field Thursday. Those three, along with Kaitlyn Sager, share a commonality with assistant coach Charise Burke — they had their final high school season taken away from them. 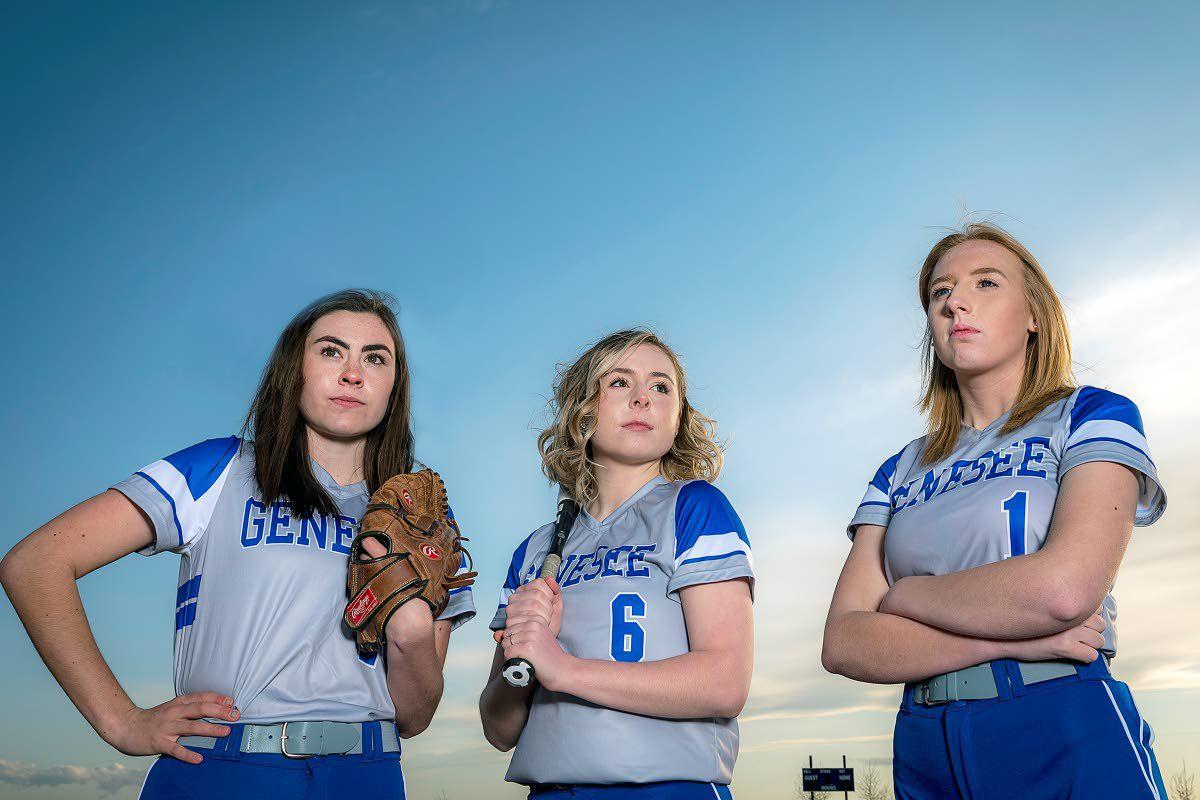 Pete Caster/TribuneGenesee senior softball players Mikacia Bartosz (left), Kassie Cass (center) and Regan Zenner pose for a portrait inside a dugout at the school’s field Thursday. Those three, along with Kaitlyn Sager, share a commonality with assistant coach Charise Burke — they had their final high school season taken away from them.

Not many of us can understand what it’s like to have something taken away from them that was completely out of their control.

As a 12th-grader in 2009, Burke and the nine other players on the Culdesac High School softball team were told they would not be able to play their season because of a shortage of players. The Wolves had won the state championship in 2006 and 2007, and also qualified for the tournament in 2008. However, the baseball team was allowed to continue.

“It was kind of hard to take in,” Burke said. “They pulled us all in one day and told us we wouldn’t have a softball team. It was kind of devastating to not play or even go back to state.”

While the situations are different, Burke no doubt can relate to many high school student-athletes throughout the state of Idaho this spring when the Idaho High School Activities Association decided April 17 to cancel the remainder of high school sports for the 2019-20 academic school year because of the coronavirus pandemic.

In Idaho, there are 2,015 reported cases of the coronavirus, with 63 confirmed deaths, according to state’s website at 4 p.m. Pacific on Thursday. In Nez Perce County, there have been 51 confirmed positive tests of COVID-19, with 18 deaths, the most in the state. There was a stretch of time in the middle of April where there were five confirmed deaths in a three-day span. In the past four days, four deaths were reported in the county. In Latah County, where Genesee is located, there have been just five confirmed coronavirus cases and no deaths.

In the United States, the Center for Disease Control’s website has reported 1,031,659 confirmed cases, with a total of 60,057 deaths (these numbers typically lag a day behind). According to the Johns Hopkins University of Medicine website, the number of cases in the U.S. climbs to 1,069,826, with a total of 63,006 deaths, as of 11 p.m. Pacific on Thursday.

The coach on Burke’s Culdesac team ... Brian Malcom, who currently is Genesee’s coach. This would have been the 10th season Malcom and Burke have been coaching together in the same dugout.

The seniors who have played together the past four seasons have put together an impressive resume. The quartet of Mikacia Bartosz, Regan Zenner, Kassie Cass and Kaitlyn Sager have combined to lead Genesee to the Class 1A district title in 2018 as well as a second-place finish in 2017 and a third-place spot a year ago. Then at the state tournament, the group helped the Bulldogs to fifth (2017), second (2018) and fourth-place finishes (2019), respectively.

Cass, a senior first baseman, could have been speaking for many athletes in the state when she was asked what her thoughts were about not playing.

“I thought we were going to (be able to win state) this year,” said Cass, who hit .483 a season ago and will attended the University of Idaho in the fall to major in biology. “We were looking pretty good. It sucks that we aren’t going to be able to play at all. I was looking forward to it. It’s been really sad. We went to the field the other day to take a picture of all of the seniors, and it was sad to see it all empty.”

Zenner also now has a better understand of how the people in the community feel about her and her teammates.

“It’s insane the amount of people who have reached out to me and who wanted (us) to play the season just as bad as we did,” said Zenner, mentioning the #BeTheLight ceremony that took place April 11, along with a Facebook campaign the school started. “They’re doing just little things to show they’re thinking about us.”

Malcom, who thought as recently as a couple weeks ago there might be a season before the IHSAA decided to cancel, aid the four girls each brought something different to the table in terms of their style of play and leadership.

Bartosz has been the Bulldogs’ main starting pitcher since her freshman year and has been the team’s MVP each of the past three seasons. In 2019, she batted .491 and had a string of 51 strikeouts in a three-game stretch.

Sager has been Genesee’s right fielder the past three seasons and has had to battle through a number of injuries. While her career batting average was low (.213), Malcom said she was one never to get down on herself and in fact, always kept her teammates’ spirits high. She is looking to go into the military, then possibly veterinary or zoology school.

Zenner earned the team’s offensive award a year ago, batting .545. She also was the team’s top utility player as a freshman, as Zenner started her career as a second baseman then went to the coaching staff and moved to shortstop and built up a solid rapport with Bartosz in the middle of the field.

“They’ve meant a great deal to this whole program,” said Malcom, who has been coaching for more than 30 years. “All four of those girls are just such great girls, they’re so dedicated and hard-working. Just like most of the girls up at Genesee are, they’re leaders and they’re going to do good things. I just can’t enough about them.

“I’m just so sad that we’re not going to get to play this year, because we had a real shot at winning the state tournament.”

Zenner said she has been implementing a workout program Madisen Yockey, an assistant on the girls basketball team, gave to her in an attempt to stay in shape in case the season were to get going. During the down time besides school work and keep in shape, Zenner said she’s been helping her parents remodeling their deck and patio in preparation for her graduation party that eventually will take place with family members.

Cass also was trying to carry on the family name in the sport. Her mother, Alicia Cass, and grandmother, Lourie Cass, also played softball and played the same position. When not preparing or participating in distance learning, she’s been babysitting her younger siblings, twins Piper and Preston who are 10, and going camping and dirt-bike riding around St. Maries.

“I’ve had a few people talk to me about (playing in college) before,” said Cass, who also played travel ball in the Amateur Softball Association during the summer, “but I was thinking that this was going to be my last season and I wanted to have that final moment.”

Cass and the three other seniors on the Bulldogs won’t be able to have that “final moment.” But clearly there is a lesson to be learned from everything that has happened.

“Enjoy every moment and not to take anything for granted,” said Zenner, who played volleyball and baskeball as well and will be attending Boise State in the fall to major in radiology. “Just those little moments you won’t be able to get back, those are the most special.”