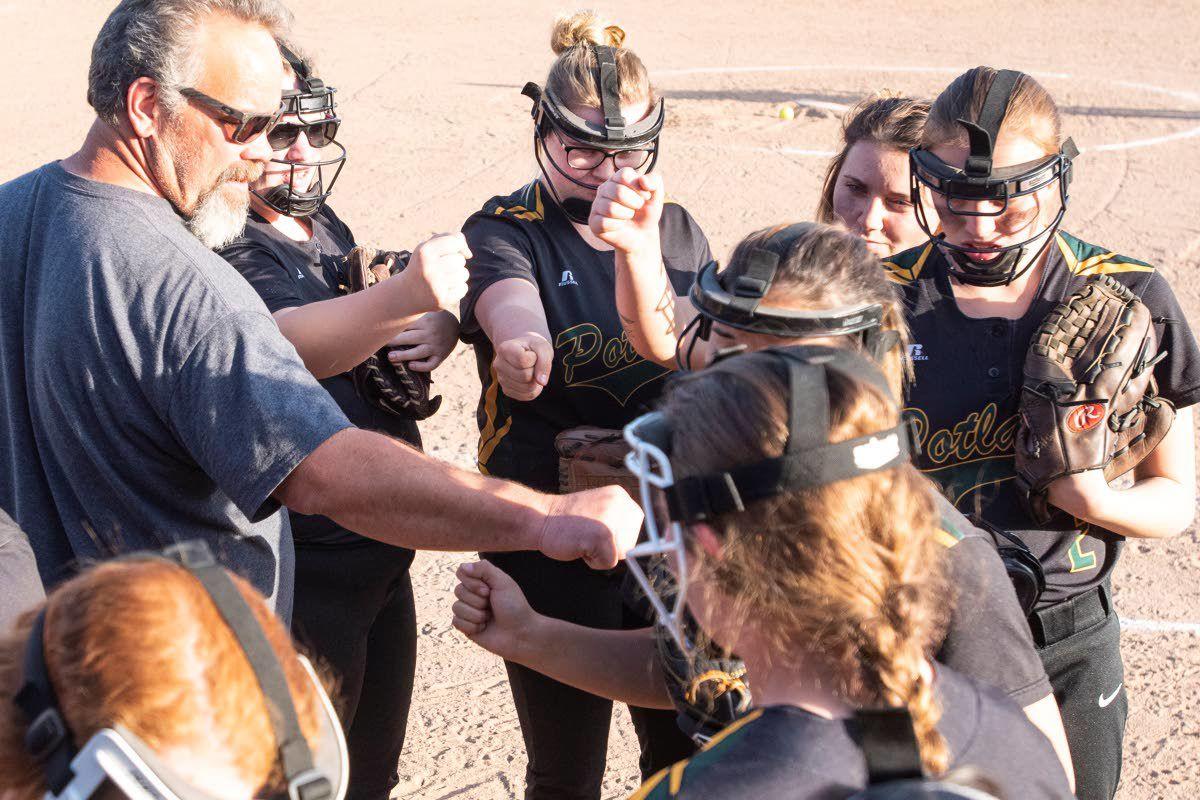 In this May 9, 2019 file photo, Desi Brown (top center) puts her fist in along with her teammates as they give a cheer in between innings of the Idaho Class 1A District II tournament championship game against Kendrick in Genesee. 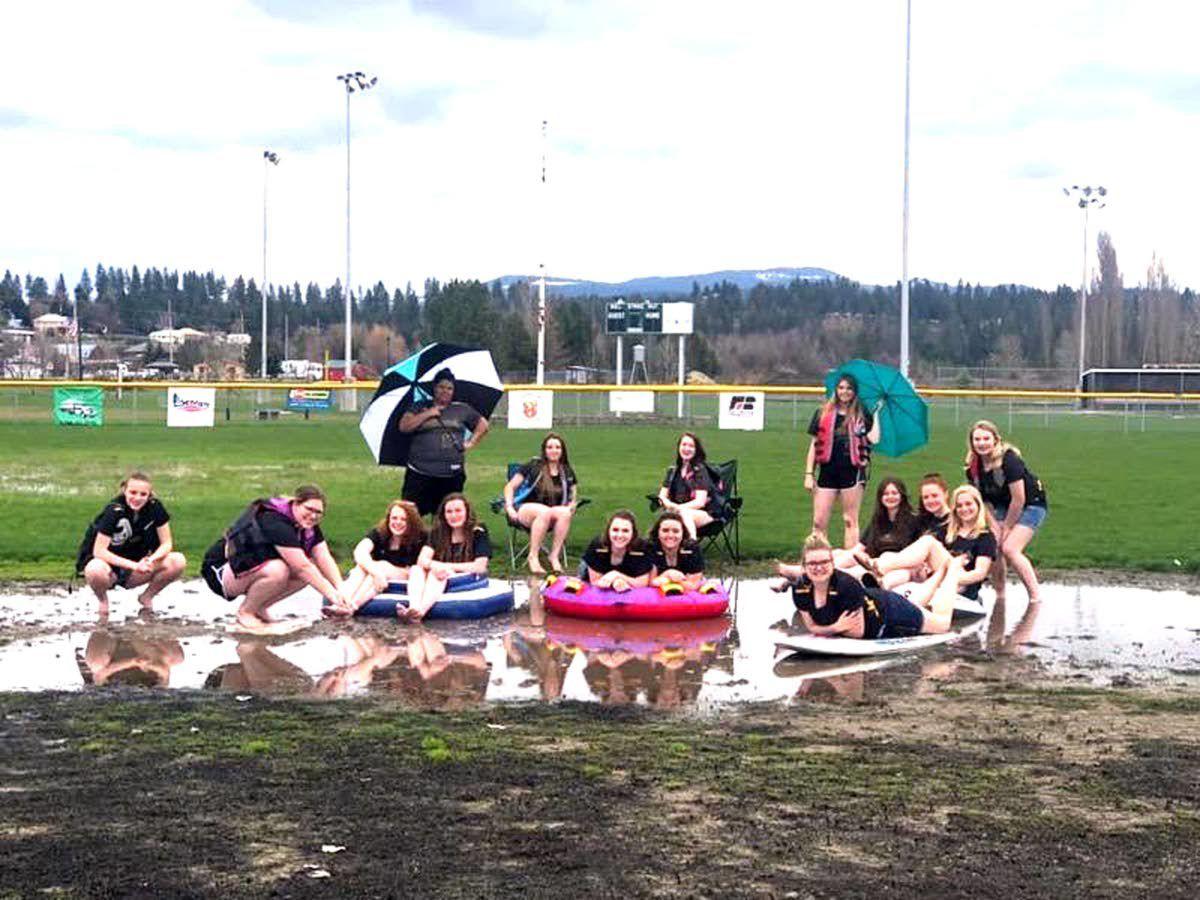 Members of the Potlatch softball team relax on flotational devices on a puddle in their infield. Early in the season, standing water often forces them indoors. That wasn’t necessarily the case this season, but their high hopes were dashed anyway.

In this May 9, 2019 file photo, Desi Brown (top center) puts her fist in along with her teammates as they give a cheer in between innings of the Idaho Class 1A District II tournament championship game against Kendrick in Genesee.

Members of the Potlatch softball team relax on flotational devices on a puddle in their infield. Early in the season, standing water often forces them indoors. That wasn’t necessarily the case this season, but their high hopes were dashed anyway.

Latest in a series profiling high-school athletes whose spring-sport quests were derailed by the coronavirus pandemic.

During any typical early “springtime” period in Potlatch, the Loggers softball team’s infield features standing water, and the grass is too mushy to get much footing.

In some ways, Potlatch High School has adopted that annual trend as its own. Last year, as a send-off just before senior day, the Loggers posed for a team photo, holding umbrellas and relaxing on inflatables in a murky, foot-deep puddle near the mound.

“Usually, our first time outside is an away game down the river,” eighth-year coach Dean Butterfield said.

Owing to unpredictable weather patterns — or, those predictably nonconducive to field sports — the Loggers typically spend several weeks leading up to the season in a gym, where they often return later in the year when Mother Nature doesn’t cooperate.

“So, each girl probably gets about 500 swings in per night,” Butterfield said.

Added senior catching/pitching/utility standout Brenna Larson: “We’re never able to practice outside until about a month in, so we’d do batting circuits for hours. It might sound boring, but it made us a really well-rounded team.”

Take the statistics as confirmation. Potlatch, last season’s Class 1A state tournament runner-up, hit over .400, and was particularly aggressive in bunting and on the basepaths. The Loggers went 18-4, and piled up 10-plus runs in 16 of their games.

“When they got on a roll, they all knew they could hit it,” Butterfield said. “They’d all worked so hard as a team, and didn’t want to let anyone else down.”

They loaded the scoreboard with 34 tallies against Culdesac; they blew past 4A Moscow three times by a combined score of 52-12; they plated 12 runs to handle 2A St. Maries, and they beat eventual state champion and Whitepine League foe Kendrick in three barnburners, by a 38-35 total margin — including in the district title.

Potlatch fell to the Tigers 20-12 in the final at Genesee on May 18, a decision underlined by deflating injuries.

“It’s always a battle with Kendrick,” senior infielder Charlee Beckner said. “Our main goal was to finish first at State, because we’ve made a tournament appearance every year I’ve been in high school. We’d gotten third and second, so first was next.

“Our league would’ve been tough, but I think with us, and the girls we have coming up, we could’ve at least had a shot at it.”

And before the spread of the coronavirus halted Idaho spring sports, the Loggers had an additional motivator — clear skies. For the first season in who knows how long, Potlatch spent its preseason training outdoors.

“We had a solid two weeks. It was unheard of to be outside so early,” Larson said. “Having such an early start on the field, I think that would’ve really helped us.”

Although Potlatch graduated six from its 2019 outfit, these Loggers had more field experience than the latter, were blooming defensively, had a corps of eight pitchers with high ceilings, and had the initial makings of another title contender.

They boasted versatility — many Loggers could play multiple positions — and a talent-loaded group of newcomers. Their three seniors (Larson, Beckner and catcher/pitcher Desi Brown) “were pushing the underclassmen hard,” Butterfield noted.

One trend of the Loggers’ softball program is to have older players exclusively teamed up at practice with those younger, to enhance camaraderie and boost development.

“Incorporating the inexperienced players with the experienced ones, Dean has done a great job with that,” Beckner said. “Girls’ sports in Potlatch do a good job in general of including everyone. We all have a lot of siblings in grades below us, especially in the freshman class. It was nice to play a little with them this year. A lot of them are crazy talented.”

When Brown looks ahead to Loggers clubs of the near future, she’s certain they’ll carry the torch well.

“We all had a connection with each other, trusted each other, and that set us apart,” she said. “You’re not gonna want to mess with (upcoming teams). I can see them winning a state championship.”

Butterfield said Potlatch, which has been to State four years consecutively, had accumulated the necessary confidence and work ethic with another year of experience. He often saw a handful of players taking time out of their school lunch breaks to pitch and hit in the gym — during their volleyball and basketball seasons.

“That just showed how good they wanted to be,” he said.

As Larson put it, the goal was “redemption” at State, and another finish at the top of a considerably strong Whitepine League.

The Loggers had made it ample times before, despite their annual status as gym-dwellers, so it has left many wondering what could have been.

“Last year was supposed to be the year, and this season, I had a lot of confidence in our team,” Larson said. “We had a bright future, and there’s no doubt in my mind, they’ll be back there.”