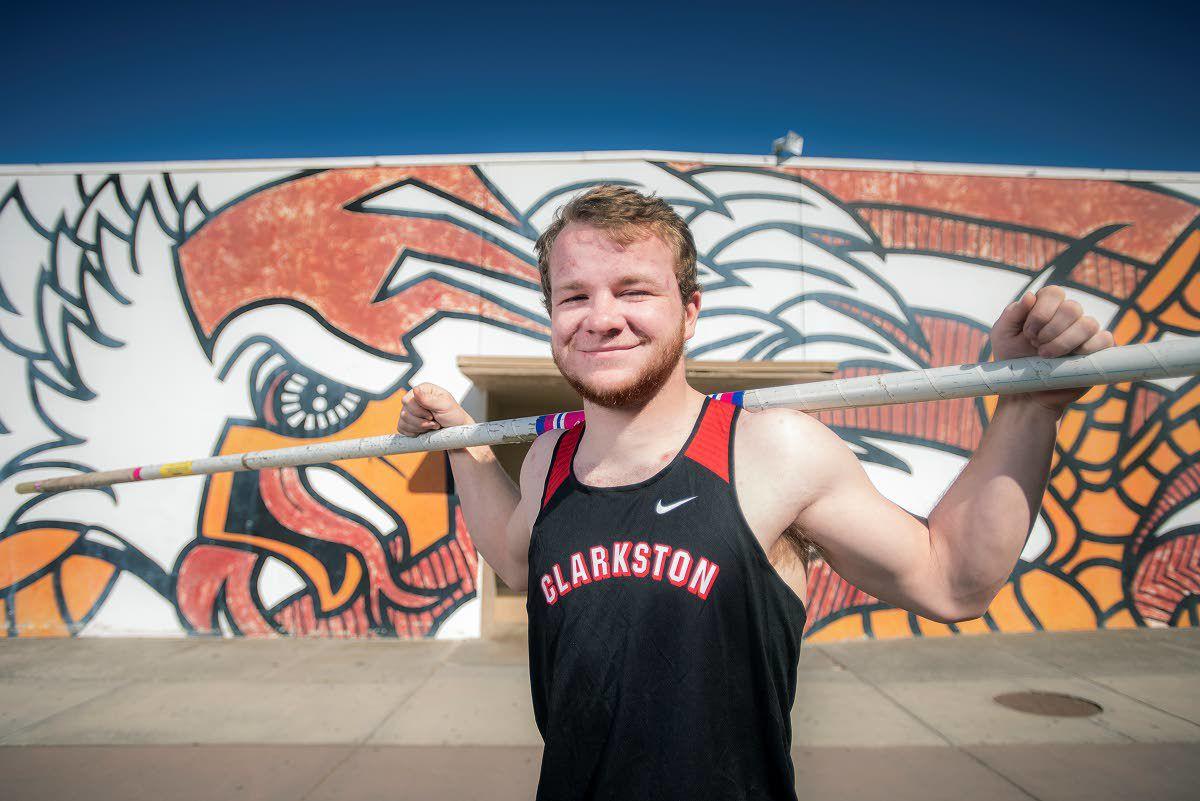 Clarkston High senior Levi Lathrop needed a 15-foot mark in the pole vault this season to be considered for a scholarship at Embry-Riddle Aeronautical University. Thanks to the coronavirus, he never got a chance to try for it. He posed for a photo Thursday in front of the mural on the side of the high school. 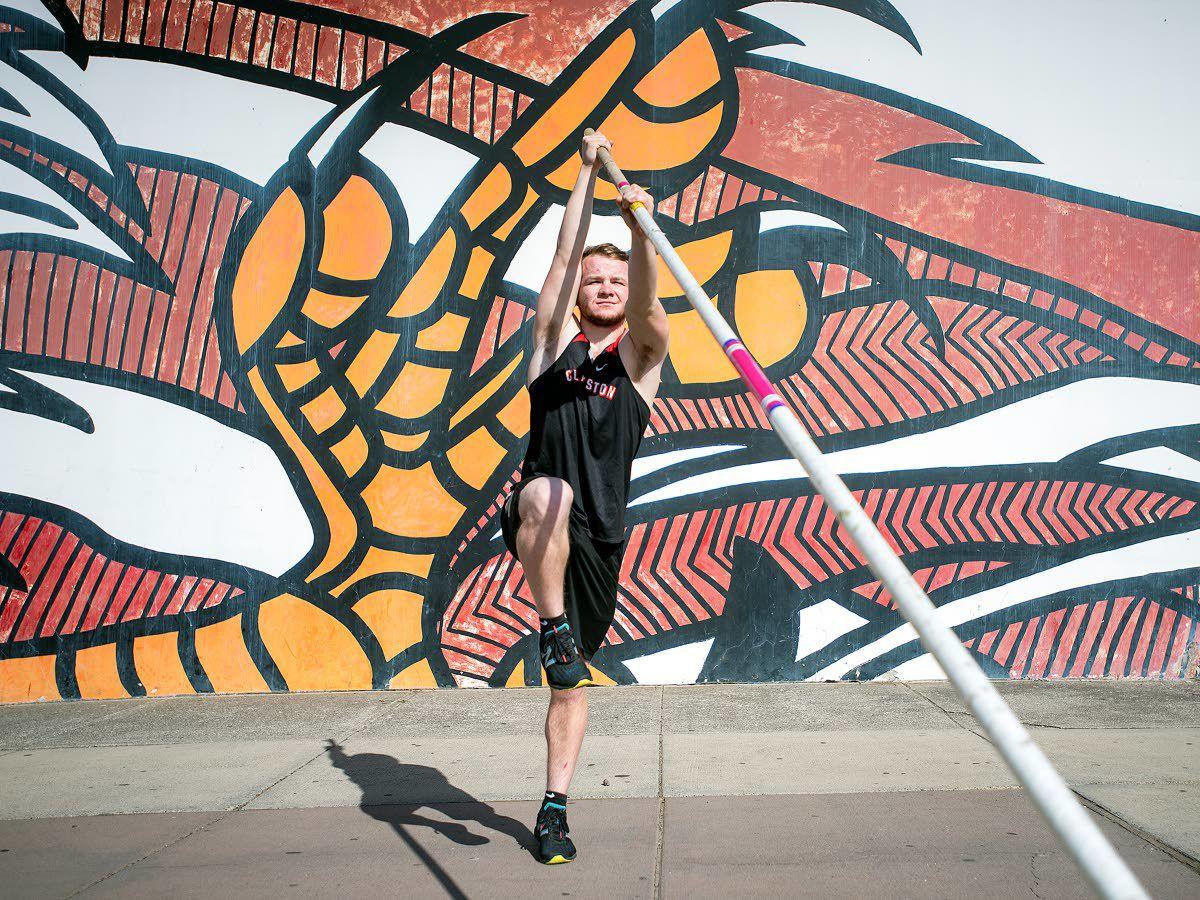 Clarkston pole vaulter Levi Lathrop demonstrates his technique for a portrait on Thursday in Clarkston. 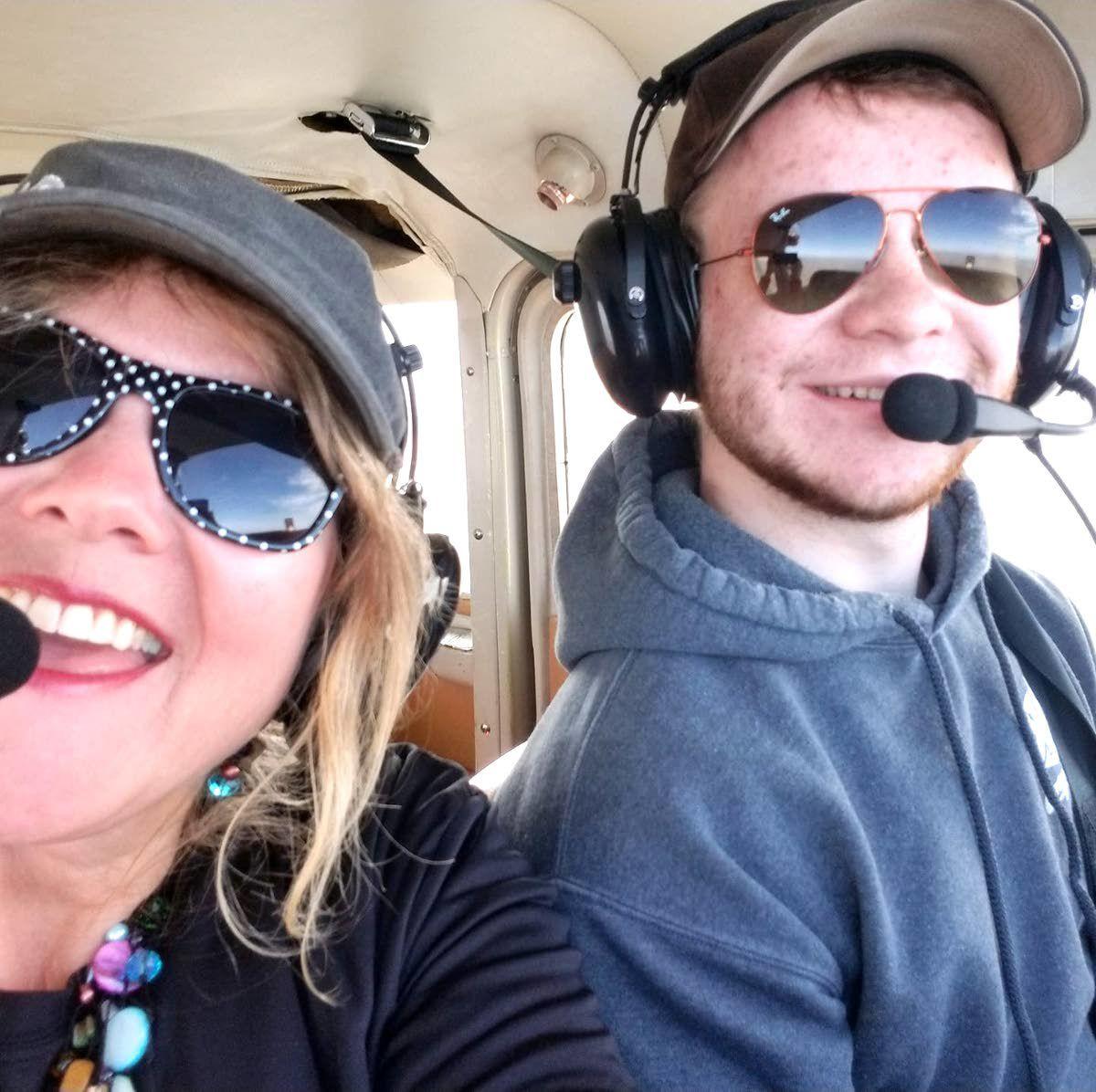 Stephanie Lathrop takes a cockpit selfie before her son Levi takes off.

Clarkston High senior Levi Lathrop needed a 15-foot mark in the pole vault this season to be considered for a scholarship at Embry-Riddle Aeronautical University. Thanks to the coronavirus, he never got a chance to try for it. He posed for a photo Thursday in front of the mural on the side of the high school.

Clarkston pole vaulter Levi Lathrop demonstrates his technique for a portrait on Thursday in Clarkston.

Stephanie Lathrop takes a cockpit selfie before her son Levi takes off.

Seventh in a series profiling high-school seniors whose spring-sports quests were derailed by the coronavirus pandemic.

Levi Lathrop remembers at age 8 looking skyward at a commercial airliner and deciding with no hesitation that he wanted to be a pilot.

He remembers watching a broadcast of a track and field competition at the 2016 Summer Olympics and deciding with no hesitation that he wanted to be a pole-vaulter.

Three years later, he was pole-vaulting for Clarkston High in the Washington state meet in Tacoma.

For the past several months, Levi has been seeking a way to fuse these two enthusiasms — flying in a plane and flying with a fiberglass pole — in a way that will further his education. Specifically, he wants to attend Embry-Riddle Aeronautical University, in Florida — a financially challenging goal that could become more realistic if he somehow lands an athletic scholarship for pole-vaulting.

It won’t happen this spring.

Despite a flair for offbeat pursuits that’s something of a Lathrop family trait, and despite a work ethic that impresses everyone at Clarkston High from the track coach to the ROTC director, Levi Lathrop is one of countless high-school seniors who have needed to adjust their goals and aspirations after the coronavirus pandemic forced the cancellation of the spring sports season. He’s been accepted by Embry-Riddle but needs a way to knock the hefty tuition down to size.

On the surface, a pole-vaulting scholarship is a lofty goal for Levi. His best high-school clearance so far is 13 feet, and he’d probably need to reach 15 to be in the running for financial help from the Embry Riddle track program.

But he’d been working for months to try to make it happen — basically to make up for lost time. He’s been vaulting for only three seasons, and because Clarkston High doesn’t have a coach well-versed in that highly technical event, he’s largely self-taught. He studies YouTube instructional films and has compiled 300 videos of his own vaults to evaluate.

Lately, though, he’s been getting the technical help he needs. He has attended clinics in Seattle, Pullman and Nevada, and during much of last winter he made after-school drives twice a week to vault with a club in Spokane.

With even an abbreviated senior track season, he’d have possibly accomplished another goal: breaking one of the oldest Clarkston High records in the book, 13-9 in the pole vault, set in 1986 by Corey Wicks (who needed his own senior breakthrough to reach that height).

“It was just amazing to see,” third-year Clarkston track coach Brian McElroy said of Levi’s embrace of the sport. “We’re trying to build a track culture at Clarkston, and he was going to be that senior who was going to show kids, ‘This sport is serious. This sport can take you places.’ ”

While winter sports were still in progress, “He was so anxious for the track season to start, texting me, ‘Can we get out the mats yet?’ ” McElroy said. “I told him that’s a state violation. We’ve got to wait.”

Before the world went into hibernation, though, Levi checked off a major item on his bucket list.

Last summer, he was one of 150 students, from an applicant pool of 1,500, to receive a full-ride Air Force Chief of Staff scholarship, worth $20,000, to an accelerated flight-training program for two months at Embry-Riddle, in Daytona Beach, Fla. It involved two training flights a day and exhaustive classwork, but upon graduation he was awarded a private pilot’s license.

“I averaged about six hours of sleep a night, we had to study so much,” he said. “It was quite an experience — I loved it. It’s the most fun I’ve ever had, I think.”

In gravitating to challenges that require derring-do like aviation and pole-vaulting, Levi is taking a cue from his father, Earl Lathrop, a retired mechanic and truck driver who, a couple of decades ago under the stage name “Earl the Squirrel,” became one of the area’s most successful contestants in demolition derbies and sprint-boat races.

Levi also seems to be taking a cue from his education-minded mother, Stephanie Lathrop, who manages a tutoring program at Lewis-Clark State College. She too gets a kick out of derring-do, but maybe less so after a harrowing incident more than 20 years ago, before Levi was born, when she was serving as Earl’s sprint-boat navigator.

During a competition near Swallows Nest Park, with their two daughters watching aghast from the shore, their boat flipped upside-down in shallow water and Stephanie, when she popped her seat belt, became trapped at the bottom of the boat. Earl was eventually able to grab her wrist and pull her to the surface, but not before her lungs had taken in water. She was treated by medics on hand and later at a hospital.

Her injuries were relatively minor — bruises, cuts, some nerve damage — but she decided her sprint-race career was done. Last summer, when Earl resumed his own racing exploits after a lengthy hiatus, it was Levi in the navigator’s seat.

“It could have been so much worse,” Stephanie said, after describing the episode with a dash of black humor.

As for Earl’s and Levi’s brushes with danger, “I’m in the middle of it with them, but I’m doing it more vicariously,” she said.

Levi provides plenty of opportunity for that. As a youngster, during a family visit to Border Days in Grangeville (where Stephanie grew up), Levi became entranced by a unicyclist. So that’s now one of his passions. Cavorting on a 5-foot unicycle has become part of his show as drum major for the Clarkston High marching band.

“He is a magnificent young man with a work ethic only matched by his kindness and humility,” said Lt. Col. Stephen Heflin, the instructor for the program.

Here, too, Levi is taking a cue from an older relative. His maternal grandfather, the late Ken Anderson of Lewiston, served as an Air Force pilot during the 1950s. Stationed in Turkey and fluent in the Russian language, according to Stephanie Lathrop, he intercepted Russian communications during the Cold War.

Levi said he’s developed an appreciation for the mental focus that can derive from risk.

“I like to challenge myself,” he said. “Pole-vaulting takes a tremendous amount of technique to start progressing in the sport, and flying requires so much concentration — you have to make everything up to code. I guess I like the stress of it all, as weird as that may sound.”

The need to overcome early obstacles may have strengthened his resolve. As an infant he was afflicted with severe upper respiratory problems that eventually required a nebulizer. The condition disappeared entirely but other challenges arose. He was diagnosed with dyslexia, which also affects his father, and he spent years in special reading classes. He made it a goal to graduate to general classes by high school, and his eventual success went far beyond that. With a 3.8 grade-point average, he was recently honored for being in the top 10 percent of his class.

“When he told me about this achievement his smile reached across the entire room,” Heflin said.

As for pole-vaulting, “My heart sinks for Levi and his missed opportunity,” Heflin said, “but if there’s anything I know about Levi, it’s only a bump in the road.”

He’s staying in condition during the pandemic, hoping to return soon to active pole-vaulting. He built a wooden device into which he can plant his pole, allowing him to practice approaches without actually vaulting. He has a job that has survived the virus threat — delivering pizza for Fazzari’s restaurant in Clarkston — and he’s locked in a competition with an influential older sister, Krista, to see who can stash more money into their savings accounts.

If nothing else, the shutdown of the sports world has given Levi a chance to do things that time might not have otherwise allowed.

One thing in particular. With a grandmother contributing financially to the venture, Levi recently rented a Cessna 172 at the Lewiston-Nezperce County Regional Airport and took his mother on a one-hour flight.