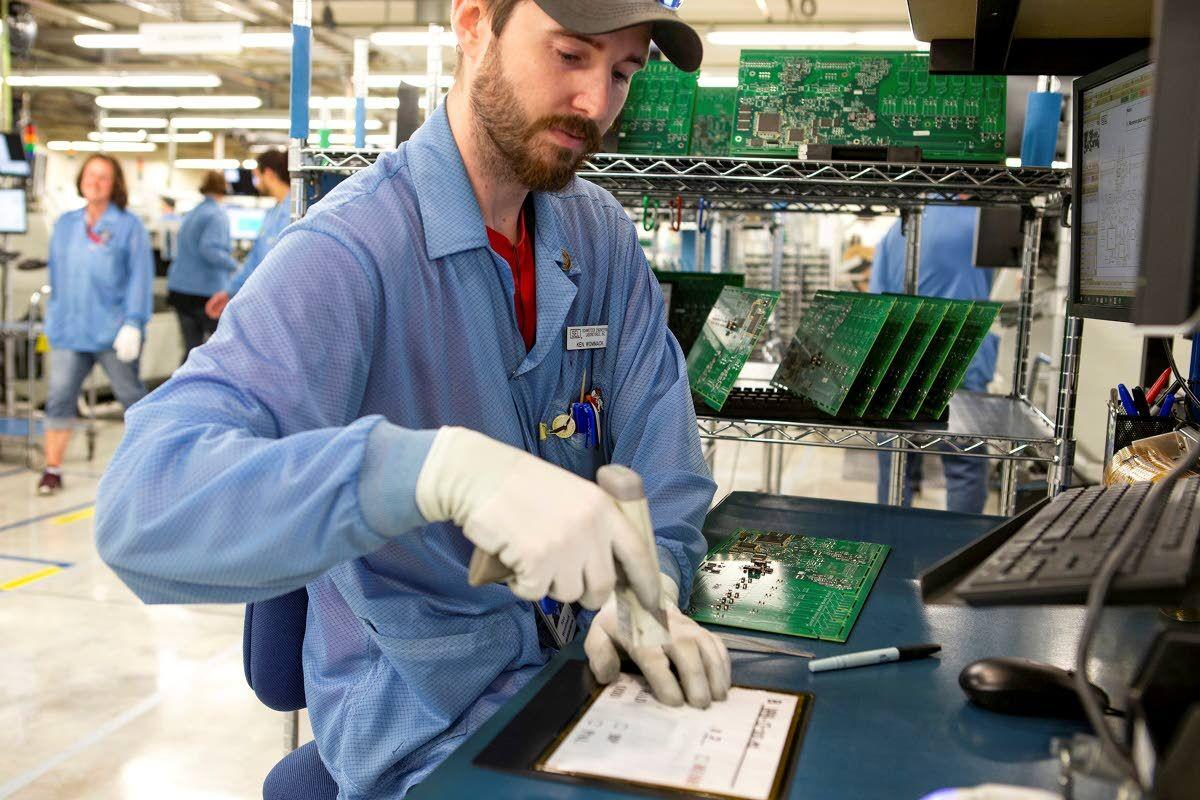 Ken Wommack, a materials clerk in Schweitzer Engineering Laboratories’ Supply Chain Management group in Pullman, scans the unique ID on a printed circuit board. SEL is one of the manufacturers in the region that has added jobs in the past year. 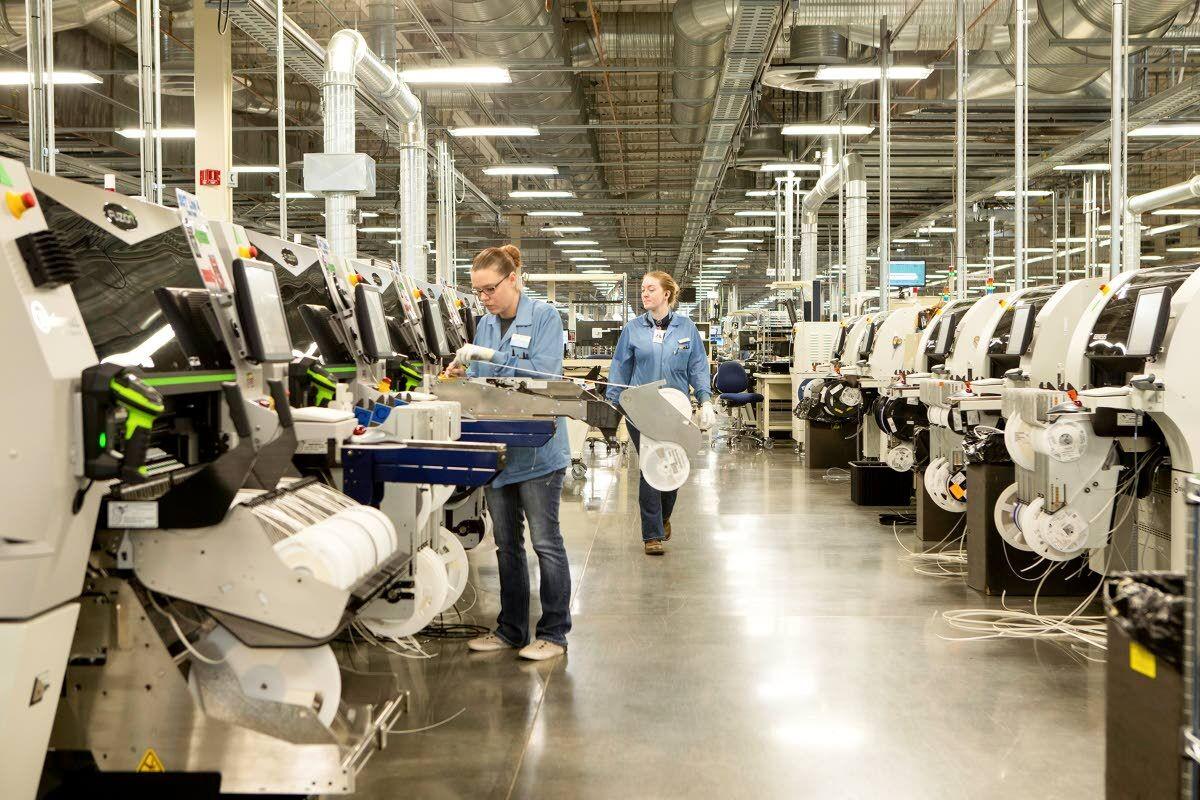 Assemblers work in the Surface Mount Technology at Schweitzer Engineering Laboratories’ Lewiston facility. The staff at the plant has grown since the coronavirus pandemic started.

Ken Wommack, a materials clerk in Schweitzer Engineering Laboratories’ Supply Chain Management group in Pullman, scans the unique ID on a printed circuit board. SEL is one of the manufacturers in the region that has added jobs in the past year.

Assemblers work in the Surface Mount Technology at Schweitzer Engineering Laboratories’ Lewiston facility. The staff at the plant has grown since the coronavirus pandemic started.

Toilet paper, ammunition and Schweitzer Engineering Laboratory’s products have helped the region recover from an economic tsunami unleashed by the coronavirus pandemic.

The worst damage happened in the spring when the number of unemployed people in north central Idaho soared from 1,412 in March to 5,696 in April as dozens of businesses closed to prevent the spread of the disease, according to numbers from the Idaho Department of Labor.

Across the river in Washington, the picture was equally grim. A total of 839 individuals were out of work in April in Asotin County, more than double the 324 who faced that challenge in the previous month.

Whitman County’s unemployment rate skyrocketed to 8.3 per-cent, one of its highest rates in recent decades, said Doug Tweedy, an economist with the Washington Employment Security Department.

“It’s very upsetting to see so many people’s lives turned upside down by it,” said Kathryn Tacke, an economist with the Idaho Department of Labor.

By October, more than 2,500 of those who had lost their jobs in north central Idaho were back at work, as well as close to 400 in Asotin County, while Whitman County’s unemployment rate rallied to 4.3 percent.

Those gains were largely a result of the strength of the manufacturing sector, according to figures recently released by agencies in Idaho and Washington.

But COVID-19 is still draining the vitality from some sectors, particularly the hospitality industry that’s been hurt by the temporary loss of overnight cruise boats in Clarkston as well as abbreviated and delayed football seasons at Washington State University and the University of Idaho.

Those factors haven’t hurt the area’s manufacturers, many of which were deemed essential businesses, and some even benefited from the pandemic.

“(The area’s) manufacturing grew an estimated 4.5 percent between February and September, as the wood and paper products sectors, gun and ammunition manufacturers, jet boat builders, and equipment manufacturers added more than 200 jobs,” according to her analysis.

Vista Outdoor added about 250 jobs, bringing its total number to a little more than 1,200, company spokesman Fred Ferguson said in an email.

The need for employees rose partly because of the cartridges Vista Outdoor makes for law enforcement and the military, he said.

“We have also seen strong end-consumer demand for ammunition and (hunting and shooting) accessories in 2020, driven by unrest and increases in socially distanced outdoor recreation,” Ferguson said.

The number of employees at SEL’s Pullman headquarters grew by 98 to 2,500, and the company increased its Lewiston staff by 31 positions for a total of 619, said Kate Wilhite, a spokeswoman for SEL, in an email.

“While some projects were postponed this year due to the pandemic, the need for reliable power is more important than ever,” she said.

Clearwater Paper saw purchases of its store brand toilet paper reach record levels in the early phases of the pandemic, a trend that helped it maintain a staff of 1,200 at its Lewiston complex said spokeswoman Shannon Myers, in an email.

Other employers are still wrestling with reductions in revenue.

The region’s largest employer, WSU, went from 6,017 full-time equivalent positions in Pullman last year to 5,923 this year as it grapples with a cut in state money, spokesman Phil Weiler said in an email.

The belt tightening hasn’t ended. A total of 51 filled positions have been eliminated since July 1.

Of those, 19 were trimmed in mid-November in student affairs, with the decrease partly reflecting a lowered need for services in student housing that is running at 15 percent capacity, Weiler said.

His office, marketing and communications, has laid off two employees, said Weiler, who declined to provide additional details.

The season for the school’s football team started late and was cut even shorter when matchups with Stanford and University of Washington in the Apple Cup were canceled because of COVID-19.

No spectators have been allowed at games, reducing the number of people booking hotel rooms and eating in Pullman’s restaurants.

Latah County is facing similar challenges and still has 1,064 residents out of work in sectors like retail and service because of reduced enrollments at WSU and UI as well as a temporary suspension of events like football games, Tacke said.

Just as the coronavirus has hit some industries harder than others, it’s also had a varying impact on different demographics of people, she said.

People who already had low-paying jobs, for instance, were more likely to be out of work than those at higher income levels.

Families with children also are bearing more of the economic fallout of COVID-19, Tacke said.

A number of day cares have shut down at a time when their services were in higher demand to fill in gaps left by shorter school days or online instruction.

Some owners were worried about their health, while others found the precautions needed to prevent the spread of the disease eliminated already thin profit margins, she said.

At the same time, many grandparents who serve as backup day care providers shouldn’t interact with children because their age puts them in a high-risk group.

“(Some parents) have decided they can’t work and are staying home,” Tacke said.

The strength of the economy in the coming weeks likely will depend partly on how prevalent coronavirus is, she said.

If the high rate of spread continues, it could make people reluctant to go shopping or participate in activities outside their homes.

“There’s unprecedented uncertainty,” Tacke said. “It puts a lot of pressure on people. They have to make decisions without really knowing what’s going to happen.”

““There’s unprecedented uncertainty. It puts a lot of pressure on people. They have to make decisions without really knowing what’s going to happen.”