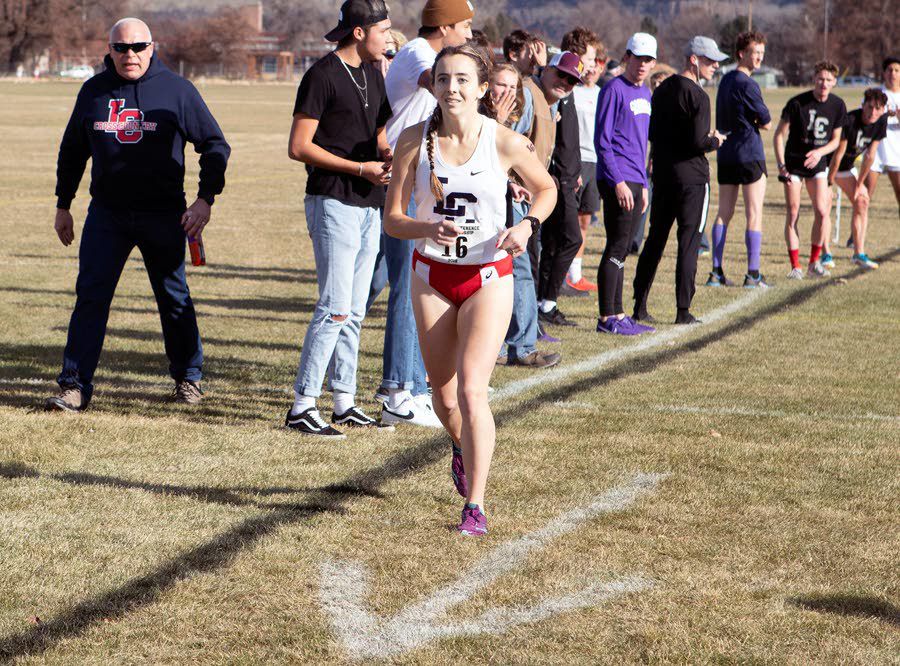 Lewis-Clark State’s Emily Adams runs during the Frontier Conference Championships on Nov. 8 in Billings, Mont. Just before crossing the finish line at the event, Adams fell three times in less than a minute. She later learned she suffered a seizure. 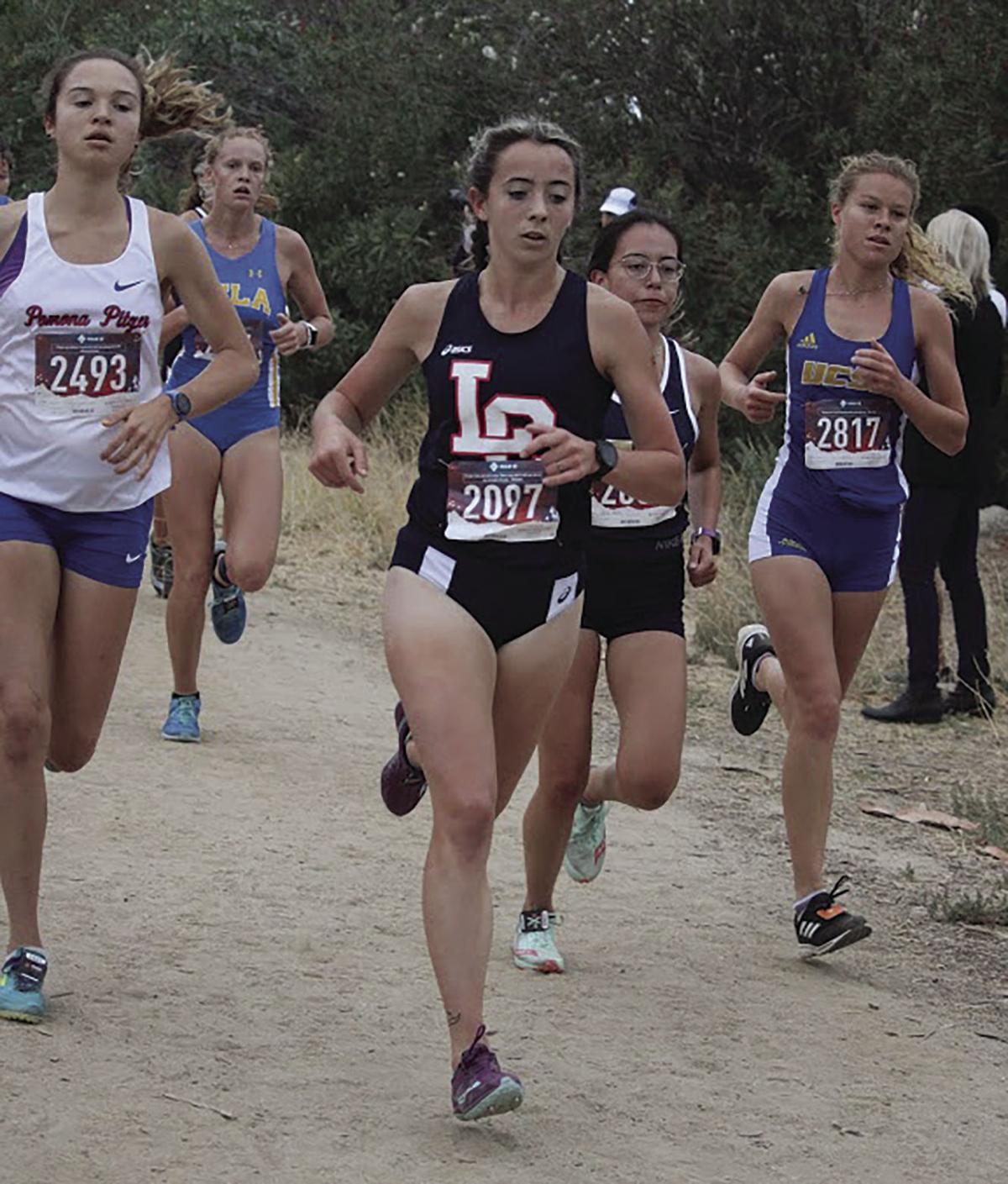 A few days after learning she had suffered a seizure, Lewis-Clark State junior Emily Adams competed in the NAIA national cross country meet in Vancouver, Wash., finishing in 60th place. She wore a heart monitor during the race. 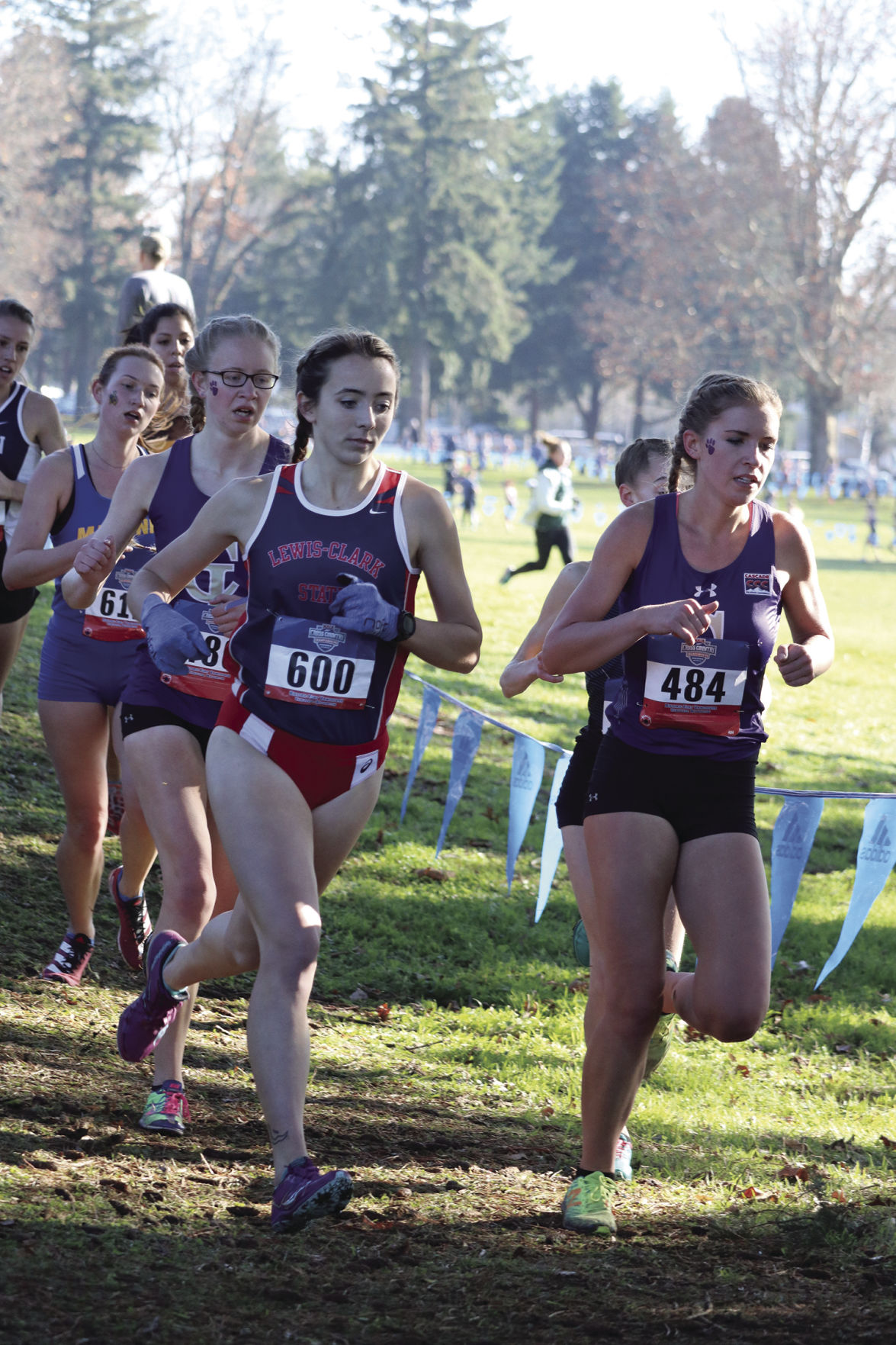 Just four months after suffering a seizure in a cross country event, Lewis-Clark State junior Emily Adams placed third in the 3,000-meter event at the NAIA indoor national track meet in March. Among 25 qualifiers for the race, she was seeded second-to-last.

Lewis-Clark State’s Emily Adams runs during the Frontier Conference Championships on Nov. 8 in Billings, Mont. Just before crossing the finish line at the event, Adams fell three times in less than a minute. She later learned she suffered a seizure.

A few days after learning she had suffered a seizure, Lewis-Clark State junior Emily Adams competed in the NAIA national cross country meet in Vancouver, Wash., finishing in 60th place. She wore a heart monitor during the race.

Just four months after suffering a seizure in a cross country event, Lewis-Clark State junior Emily Adams placed third in the 3,000-meter event at the NAIA indoor national track meet in March. Among 25 qualifiers for the race, she was seeded second-to-last.

If Emily Adams ever hears a distance-running colleague say something like, “I barely finished that race,” she can justifiably raise an eyebrow.

Then she can talk about the time she lay face-down on the turf, motionless and apparently unconscious, the timing chip in her runner’s bib having narrowly crossed the finish line before she’d collapsed for the third time in less than a minute.

Here’s the capper: She was later told she’d suffered a seizure.

Adams, who recently completed her junior year at Lewis-Clark State, talks about the incident from November with a curious matter-of-factness, partly because that’s her M.O. and partly because she has reason to think it was a one-off.

She thinks she could have driven that point home if the 2020 outdoor track season hadn’t been canceled by the coronavirus pandemic. But she’d already made a strong statement before that. Two weeks after her harrowing episode, she competed in the NAIA national cross country meet. Four months after that, she placed an astonishing third in a distance race at the NAIA indoor track championships.

Adams is a bit of an outlier anyway. As a senior at Waitsburg (Wash.) High School, 80 miles west of LCSC, she won three Class 1B races at the 2017 state track meet — not highly unusual for a dedicated distance runner. But she also qualified in the triple jump, placing third. That part is unusual.

She said in a recent phone interview she gets her toughness from her parents, Lanny and Ann Adams, who are both unit supervisors at the Washington State Penitentiary in Walla Walla. But she’ll apply her toughness in her own way, thank you. When her schooling is done, she wants either to own a retail shop that caters to runners, preferably in the Lewiston-Clarkston Valley, or to become an exercise physiologist.

“I was always the hyper kid in the family,” she said. “Definitely, fitness is the thing for me.”

In any case, nobody familiar with her seizure episode will question her resolve.

It took place during an otherwise normal 5,000-meter women’s race at the Frontier Conference cross country championship Nov. 8 at the Amend Park soccer complex in Billings, Mont. The Warriors wonder whether Billings’ 3,100-foot elevation played a role in disorienting Adams, because there’s not a lot of other facts to go on. Neither she nor anyone else in her family had experienced a seizure before.

“I would say the last 1,200 meters of the race was when things started to feel off,” Adams told LCSC sports information director Alisha Alexander in a fascinating interview. “By this point, I had lost contact with the lead group and was trying hard to keep moving forward. With 800 meters left was when my vision began to get fuzzy and I knew something wasn’t right, but I wasn’t going to stop.”

With 400 meters left, “I tried to build a kick but my legs weren’t responding. I remember somewhat panicking and thinking, ‘This isn’t good.’ I remember hearing the crowd shouting, but words weren’t processing.”

When an opponent passed her, Adams tried to match her acceleration. That’s when she tumbled to the ground the first time.

“I want to say I popped up right away, but I’m not entirely sure,” she said. “Once on my feet, I pushed forward toward the finish but was getting nothing in return in terms of speed. I could still hear people yelling at me but couldn’t make out the words. Although I was moving toward the finish line, it felt as though it kept getting farther and farther away, just like in the cartoons.”

Watching all this in horror was Adams’ fiance, former Logos Secondary and LCSC runner Jonny Handel, who was moving about the soccer complex with other spectators, including Adams’ parents.

“With 1,000 meters left, she started to look ghostly white,” Handel said by phone last week. “With about 400 to go she started to look like she was dozing off. She was running side to side, really trying as hard as she could, from what I could tell. But really there was nothing left. I’d say with 20 meters left, she collapsed — had a couple of girls pass her. She tried to get up, took a few more steps, and then basically almost did a straight Superman across the finish line.”

Afraid she’d be trampled by other runners, Handel rushed to the scene.

“She wasn’t moving, she was completely unconscious,” he said. “I kind of picked her up as best I could and stumbled over to the side and laid her down. Her parents were there too. We’re all in shock, pretty much.”

Her legs hadn’t crossed the finish line, but her timing chip had — meaning she was an official finisher, in eighth place, in a time of 19 minutes, 32.20 seconds. She was a tenth of a second behind seventh.

When she regained consciousness, Adams knew she had experienced something more than typical race fatigue.

“I remember that all I wanted to do was sleep, and I believe I drifted off a few different times,” she said. “Everywhere on my body ached. Even opening my eyes felt excruciating and my head felt like it was going to explode. My parents, fiance, coach and some medical staff were with me. At some point they tried to get some electrolytes into me, but I kept trying to sleep. Finally, after about 30 minutes, I was able to stand but needed support. I had to take breaks when walking around afterward due to feeling exhausted. During awards I was very hazy and still in a lot of pain.

“Our team drove back to Lewiston that night and the entire ride home I was puking and unable to keep down food. For about 72 hours afterward food was hard to keep down. Saltine crackers, soup and Bodyarmor (sports drink) became my best friends. The next couple of days my body felt as though a freight train had run me over. Even my arms and shoulders were sore and tight. I tried to run two days after (the meet), but could barely make it 20 minutes.”

During that week she underwent numerous medical tests and was relieved when doctors ruled out one of their early suspicions, hypertrophic cardiomyopathy, a thickening of the heart. Ten days after her seizure, she was given medical clearance to resume running. A few days after that, wearing a heart monitor, she competed in the NAIA national meet in Vancouver, Wash., and placed 60th. It was a comedown from her 23rd-place showing the previous year, but nonetheless impressive given her lack of training the previous two weeks.

It wasn’t until after the national meet that she visited a neurologist and was given an explanation for what had happened in Billings: She had experienced a seizure, presumably fatigue-induced.

Since then, she’s been ordered to document any symptoms that could be associated with seizures, such as deja vu or heart flutter. But there have been no further episodes. Although her seizure wasn’t necessarily epileptic, she will be prescribed epileptic medication if she has another episode.

“I think you might see it at the ultra-endurance races,” she said. “Most people won’t push their bodies past that point. If they’re going to have a problem, they’re going to stop or slow down or ask for help. ... Endurance athletes generally are a kind of a different category, a different breed in some ways. There are some that can tolerate a lot of pain, and those are usually your best runners.“

Handel, who placed third for LCSC in the NAIA men’s marathon last year in Gulf Shores, Ala., said he saw runners in that race “completely dazed, stumbling over the finish line,” but he attributed it largely to the Alabama humidity. His fiancee’s ordeal was different.

But her high pain tolerance? That’s what he thinks he was seeing, along with her “complete persistence, her willingness to never give up, to get to the end no matter what. And that’s tricky.”

In other words, a little frightening. Two years ago, a high school senior in North Carolina suffered a seizure during a race and died of cardiac arrest.

“If it was a seizure,” Handel said of Adams’ episode, “it could have been a lot worse.”

Adams and Handel plan to marry June 19, having moved the wedding outdoors in deference to the pandemic. In the interim, Adams is looking forward to her senior cross country season this fall. To judge by her performances in the winter, the episode at Billings hasn’t cowed her. Especially striking was her third place in the 3,000-meter run at the NAIA national indoor meet in March. Among 25 qualifiers for that race, she’d been seeded second-to-last.

Collins doesn’t necessarily think the incident at Billings motivated Adams to work harder. That might be impossible. But she thinks it might have sharpened her focus, out of a fresh determination to take nothing for granted.

“If anything it makes me stronger,” she said, “knowing I can overcome something like that and still have the success I did. It just gives me a higher drive to be successful.”

Many of the quotes from Adams in this story were provided by Alexander.