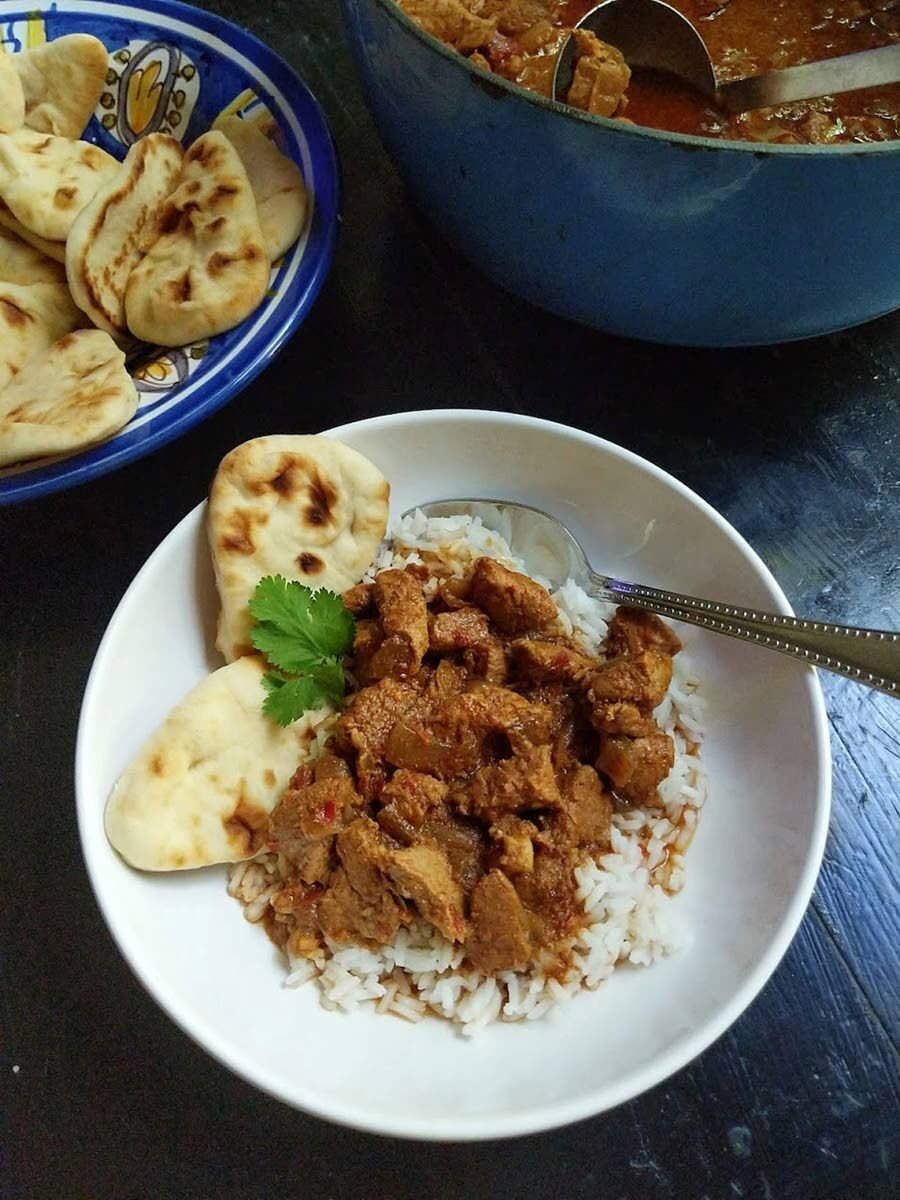 Vindaloo usually conjures up a searingly hot curry, but this recipe is relatively mild. It’s made with pork butt and dried guajillo chiles.

Vindaloo usually conjures up a searingly hot curry, but this recipe is relatively mild. It’s made with pork butt and dried guajillo chiles.

Vindaloo is usually associated with a heavily spiced, very hot Indian curry. But it’s easy to tame if you’re not a fan of food that makes you sweat.

This recipe, from America’s Test Kitchen’s new “The Complete Autumn & Winter Cookbook,” is one example.

Instead of the dried Kashmiri chiles used in the traditional Goan recipe, it substitutes guajillo chiles and paprika to add a mild heat and earthy flavor. Vinegar added halfway through the cooking process offers the dish’s characteristic tang.

It takes close to two hours to roast the pork butt and sauce in the oven, so it’s probably not a dish you want to whip together on a school night. Save it for the weekend, reserving any leftovers for a desk lunch or reheatable, after-sports-practice supper. (Pork and sauce can be refrigerated for two days.)

I’m not a tea drinker, so I left out the loose tea and am pretty confident the taste didn’t suffer. I served it with rice and mini naan from Trader Joe’s for scooping the sauce, but soft white dinner rolls, which are similar to the leavened bread rolls served with Indian curries, would also a good accompaniment.

Combine guajillos and ½ cup water in bowl and microwave until steaming, 90 seconds. Let stand until softened, about 10 minutes.

Heat oil in Dutch oven over medium heat until shimmering. Add onion and cook, stirring frequently, until soft and golden, 7-9 minutes. Add pork mixture and stir to combine. Spread mixture into an even layer. Continue to cook until mixture begins to bubble, about 2 minutes. Cover pot, transfer to oven and cook for 40 minutes. Stir in vinegar.

Cover and return pot to oven and cook until fork inserted into pork meets little or no resistance, 40-50 minutes.