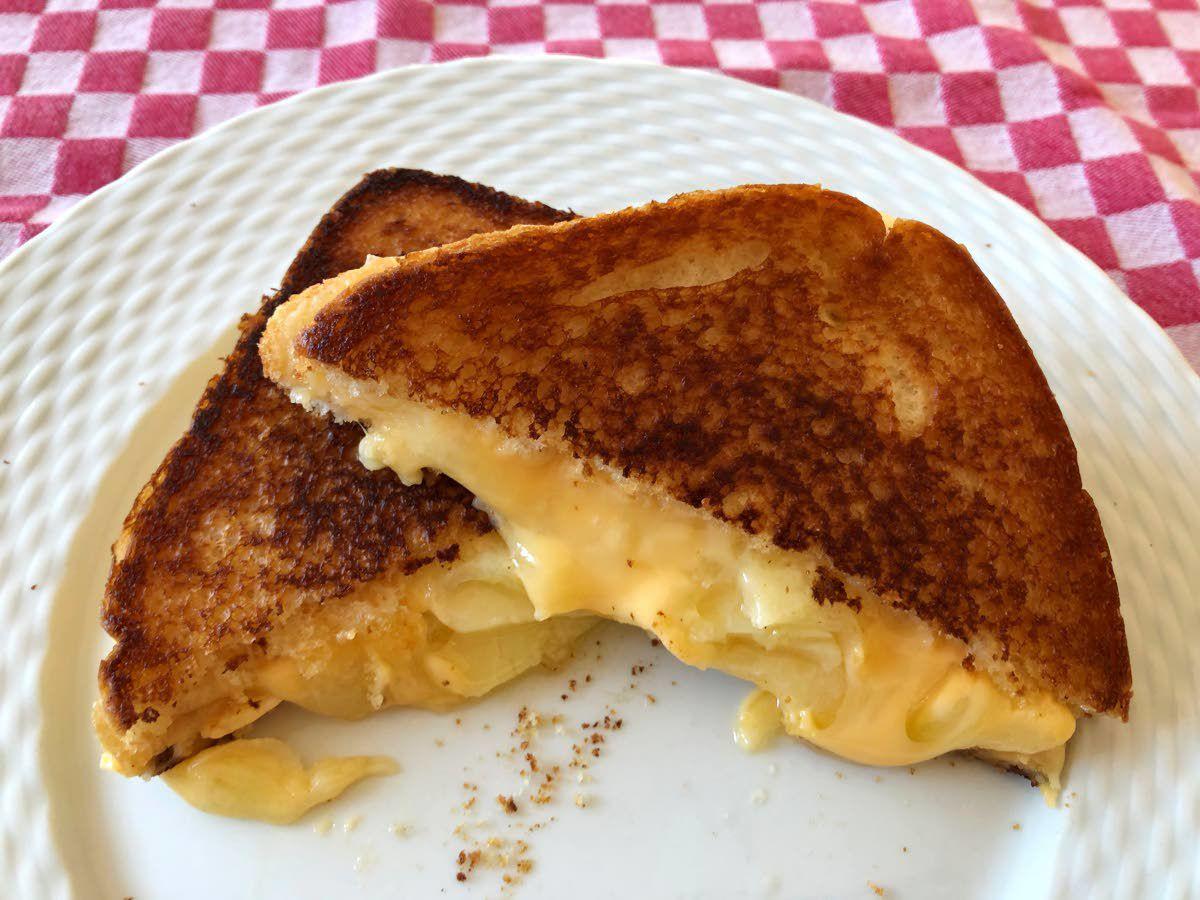 Using both stovetop and oven makes this grilled cheese sandwich the best ever. 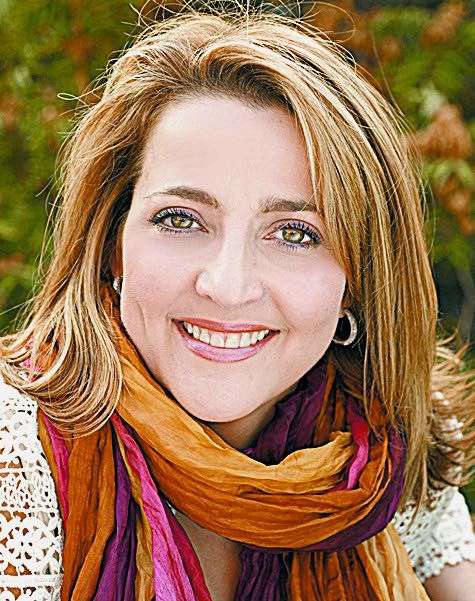 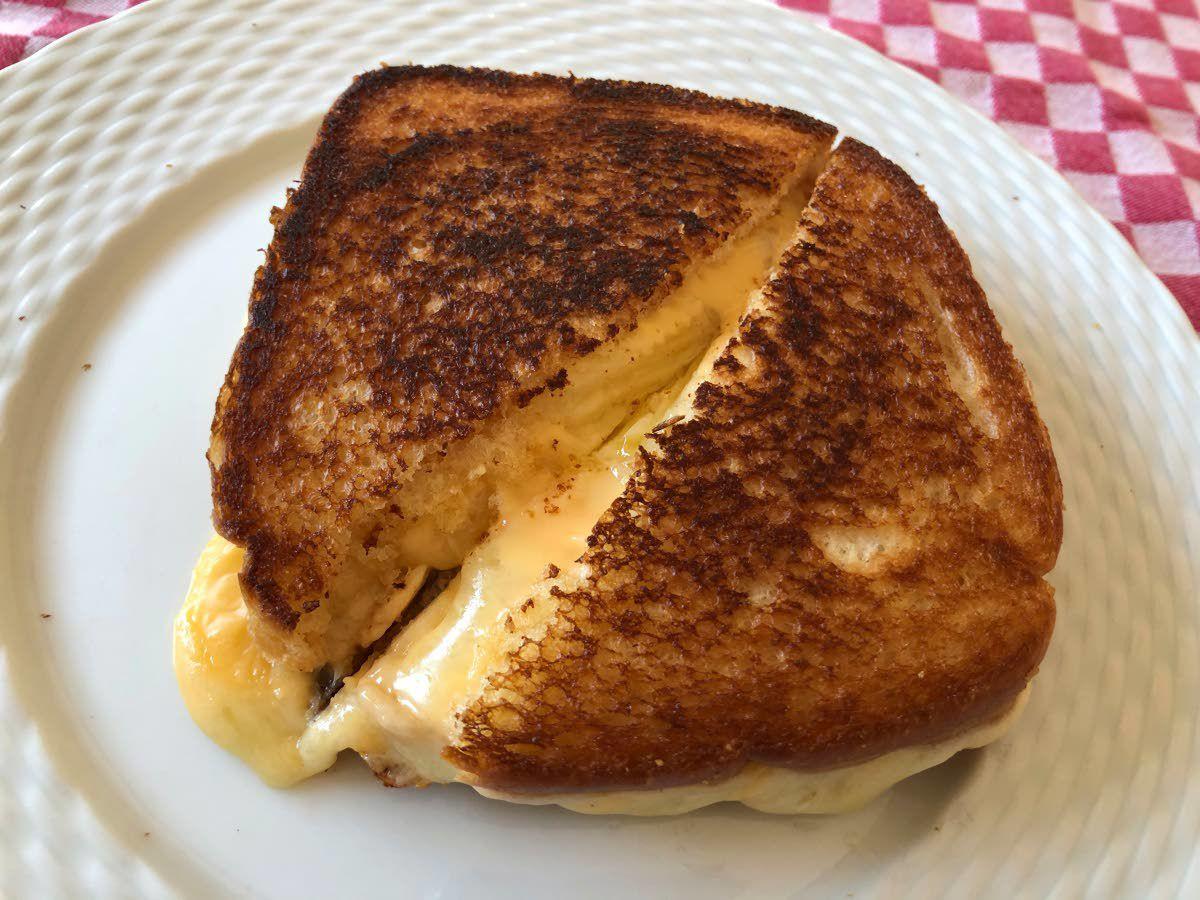 Using both stovetop and oven makes this grilled cheese sandwich the best ever.

Grilled cheese is the ultimate comfort food, an adult treat that harkens back to childhood. I never met a grilled cheese sandwich I didn’t like.

Where I grew up, there was an old-fashioned drug store with a lunch counter. When the weather was good, my best friend and I would ride our bikes there and order grilled cheese and made-to-order orange-ades. The grilled cheese was made with fluffy white bread and American cheese on a griddle. It had one slice of cheese between the bread slices and was as thin as a sandwich can possibly be, as the bread was compressed during grilling. Still, I have a vivid and mouthwatering taste memory of this grilled cheese, as if I ate it yesterday.

At home, grilled cheese mostly meant Swiss cheese and rye bread, or Roman Meal bread stuffed with sharp cheddar and grilled in a pan. I loved them both. When I lived in Chicago and needed comfort food, I would go to a Greek diner and order a grilled Swiss cheese on rye with bacon — enough said!

I use a sturdy white bread; Pepperidge Farm original white is my top choice. I use one slice of American cheese, aka melty cheese, on each side to hold everything together and then add a thick slice of whatever cheese I have on hand. It is usually Muenster, Swiss or sharp cheddar — but you can even use pimento cheese if it doesn’t have too much mayo in it.

I used to butter the bread and try to “grill” the sandwich on the stovetop in a non-stick skillet. But invariably, the cheese was still cool in the middle when the outside of the bread was brown. Making grilled cheese in a panini maker solved these problems, but then it wasn’t a grilled cheese per se. It was a crisp, flattened cheese bread.

I wanted to recreate the perfect drug-store grilled cheese, but with more and better cheese.

So instead of spreading the bread with butter or mayo, I took a note from the drugstore griddle and put a small bit of butter in the pan. Once it was melted, I swirled the bread in the butter, adding a thin coat to one side of the bread. I removed one piece of bread, stacked the cheese on the other, and then topped it with the first slice — butter-side out.

If you’re adding other ingredients, like bacon, tomato, mushrooms, caramelized onions, etc., now is the time to do it.

Quick tip: I keep my bread in the freezer and start out with frozen bread. The rigid bread helps keep the structure of the sandwich intact before the cheese starts to melt and hold everything together. Using frozen bread also slows down the browning (burning) of the bread.

Don’t turn the heat higher than medium. I let the sandwich toast for 1-2 minutes, or until it’s crisp and lightly brown, and then flip it to brown the other side. Do this carefully, because the cheese isn’t melted yet and the sandwich won’t hold together on its own. But if it slips apart, don’t worry: At this stage, you can easily realign the bread.

Next, I pop the sandwich and non-stick skillet into a preheated 350-degree oven for 2-4 minutes, depending on the thickness of the cheese and bread. This lets the cheese melt completely without the bread burning. It takes 3-4 minutes for the cheese to melt, and then your grilled cheese is ready.

Remove it from the heat, and slice on a plate or cutting board. You will have a super melty, gloriously brown and crispy grilled cheese sandwich with a buttery but not greasy crust.

Whatever cheese you choose, I recommend at least one slice of melty cheese to hold things together. American cheese comes in white and yellow, and if I am making a grilled cheese with a fancy cheese too, I opt for the white.

Enjoy your version of the classic but don’t stop there. Grilled cheese lends itself to lots of flavor variations.

A few of my new combinations:

— Ham and Gruyere on Brioche or Martin’s Potato Bread

Pesto, Mozzarella and Prosciutto on Italian Bread with a Sesame Seed Crust

Preheat oven to 350 degrees. Place the butter in the non-stick skillet. Heat the pan and melt the butter over medium-low heat.

When the bread is lightly browned, carefully use a spatula to flip the sandwich over to brown the other side. Re-align the bread and cheese if necessary.

Place the skillet with the sandwich in it in the oven for 2-4 minutes or until the cheese is completely melted. Remove from the oven and cut in half. Enjoy immediately!

Karmel is a grilling, barbecue and Southern foods expert, and the author of four cookbooks. She writes about food for the Associated Press and her website is www.elizabethkarmel.com.