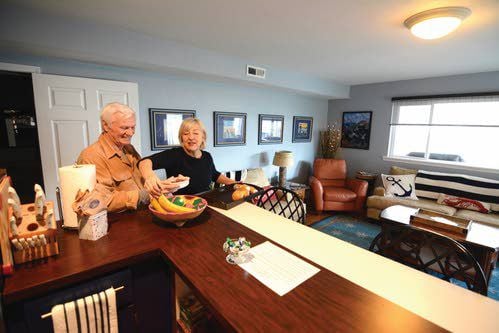 Ron and Sharon Sydenham stock the sitting room/kitchen of their nautical-themed Airbnb west of Clarkston, overlooking the Snake River. 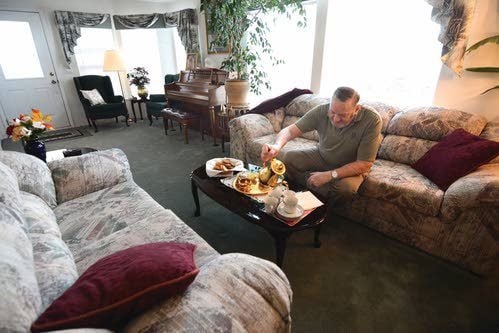 John Stalter pours a cup of tea for a visitor at his future Airbnb in Clarkston. 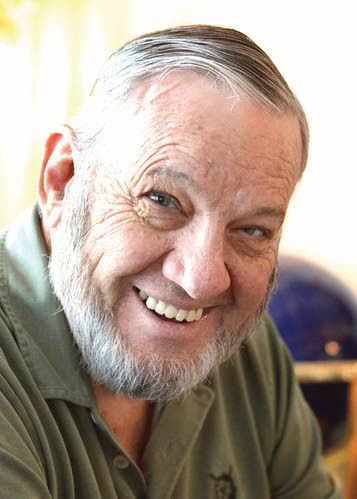 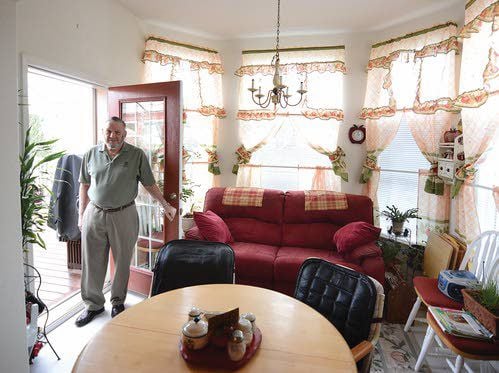 The breakfast nook in Stalter’s future Airbnb leads out to a deck overlooking the Snake River. 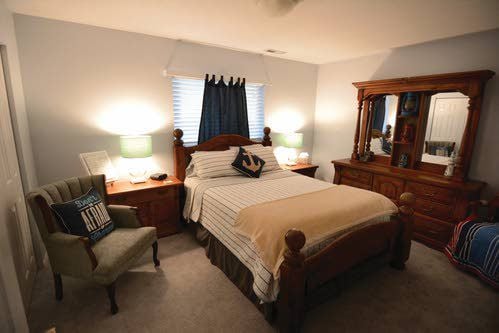 There are two bedrooms at the Sydenham’s Airbnb in Clarkston, plus an exercise room and office.

Ron and Sharon Sydenham stock the sitting room/kitchen of their nautical-themed Airbnb west of Clarkston, overlooking the Snake River.

John Stalter pours a cup of tea for a visitor at his future Airbnb in Clarkston.

The breakfast nook in Stalter’s future Airbnb leads out to a deck overlooking the Snake River.

There are two bedrooms at the Sydenham’s Airbnb in Clarkston, plus an exercise room and office.

Sharon Sydenham was at a baby shower on a Saturday when she got the first booking for the basement space in her home she rents out through Airbnb.

The retired massage therapist and her husband, Ron Sydenham, a retired carpenter, had listed it the previous evening. The first guest planned to arrive the next day.

"We didn't think it would happen that fast," Sharon Sydenham said.

The Sydenhams are among a small but growing number of homeowners in the Lewiston-Clarkston Valley who rent out a portion of their homes on Airbnb and other internet sites. The number of listings for Asotin and Nez Perce counties has grown from as few as two in 2014 to about a dozen now just on Airbnb, and at undocumented rates in other communities.

That's left elected officials with questions about how or if to regulate them, especially because it can be difficult to spot the activity.

The Sydenhams are responsible for pushing Asotin County officials to address the issue. The county didn't have clear rules for Airbnbs when the couple approached officials last year and asked about how they could operate such a venture legally.

"We just wanted to make sure we were complying," Sydenham said. "We didn't want to break any laws. We want to be good neighbors."

Eventually the planning commission settled on defining Airbnbs as bed-and-breakfast establishments, which have to meet requirements such as off-street parking for guests, said county planner Karst Riggers.

A conditional-use permit is required when such an establishment is located in a residential zone. The permit is valid for three years and the county is not obligated to renew it at the end of that time if the business has become a nuisance to its neighbors, Riggers said.

He is sending letters to those who run the ventures notifying them of the decision, after a second person, John Stalter, sought permission to operate as an Airbnb.

One of the only reasons he knows where to send the letters is that he has been with the county for more than 20 years, Riggers said. "(The website) doesn't give addresses. I had to do some creative sleuthing to see where these places are."

The Sydenhams have been up and running since August. They were booked every weekend in the fall and summer and now have reservations into October.

"I was surprised there was this much of a demand," Sydenham said.

Every guest has to tell them who they are, why they're coming and how long they will stay. The quarters go for about $90 per night. They have two bedrooms, with a study, kitchenette, bathroom, hot tub and a deck with a view of the Snake River. The rooms have their own entrances that open with a code.

Airbnb keeps some of the money, collects taxes and sends the Sydenhams checks they use to supplement their retirement income and make improvements on the property.

Sometimes they never see the guests, especially if they only stay a short time. Other times they become friends. Their first customer was a Floridian cave diver who had struck up a friendship with a Moscow woman online and was hoping it might turn into a relationship.

They don't know if the romance blossomed. But they enjoyed meeting him. He talked and sang with them on the deck and claimed to have picked up and talked to what he thought was a rattlesnake at Hells Gate State Park.

Guests from Budapest were on a tour of Yosemite, Yellowstone and other national parks. Russian visitors were working on the multimillion dollar upgrade at Clearwater Paper. One woman cooked Thai food for them.

"We usually have one meal together if they stay for a while," Sydenham said.

How difficult it is to replicate what the Sydenhams do is something Stalter, a retired printer, is about to learn. He's in the process of meeting the regulatory requirements to advertise one room in his home on Airbnb.

Guests will have their own bedroom and bathroom. He will share his living room, dining nook, family room, deck and yard overlooking the Snake River with visitors. He'll serve tea and cookies in the afternoon and give guests a print of an ink drawing of horses at Swallows Rock that hangs in the room.

He hopes to earn enough extra cash so that he can stay in his home since his retirement income isn't stretching as far as he thought. He considered a reverse mortgage, house cleaning and taking a job as a valet at St. Joseph Regional Medical Center before choosing this option.

Serving as an Airbnb host will leave him plenty of spare time, and cooking and meeting new people are activities he enjoys, Stalter said.

"It's something I can do pretty much as long as I want."

Municipalities have varying levels of regulation for Airbnbs and other lodging market places that allow homeowners to rent to travelers.

Here is a run down:

A bill before the Idaho Legislature would bypass local jurisdictions and regulate the industry at the state level. House Bill 66 has been printed and referred to the revenue and taxation committee, but no hearing has been held on it yet.

It calls for lodging market places to register with the state tax commission for a license to pay state taxes.

It limits cities and counties from imposing limitations, with some exceptions. Among the exceptions are rules that involve residential zoning or are for health and safety reasons, including traffic control. Municipalities can prohibit the use of the properties for activities such as housing sex offenders or selling illegal drugs.

No regulation at this time.

Must follow all rules that apply to bed-and-breakfast establishments.

No regulation, mostly because the city has so few. “They’re not even on our radar,” said Jim Martin, Clarkston’s public works director. “It’s hard telling when we would approach the issue. ... It hasn’t been a problem. Typically you don’t fix something unless it’s broken.”

No regulation at this time. “We’re waiting to see what the (Idaho) Legislature does,” said Moscow City Attorney Rod Hall.

Airbnbs fall under the same category as bed-and-breakfast establishments. In most areas, people can have two guestrooms in single-family homes with a maximum capacity of two per room without getting permission from the county. Hosts have to meet additional requirements if the structure where the guests will be is different than the house or it involves more than two rooms.

No regulation at this time.