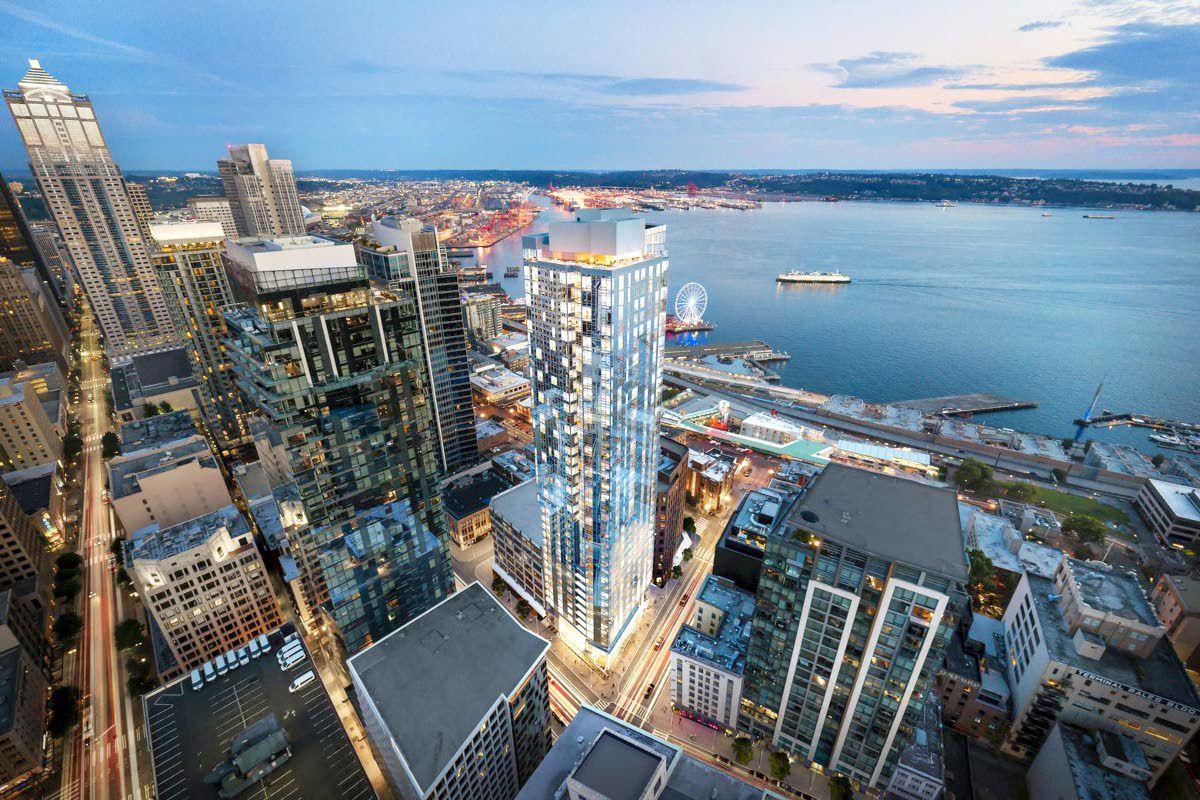 The Emerald, a 40-story condominium tower near Pike Place Market, gambled that high-end buyers might be willing to live a car-free lifestyle. Months before its scheduled opening, it appears that gamble hasn’t paid off. 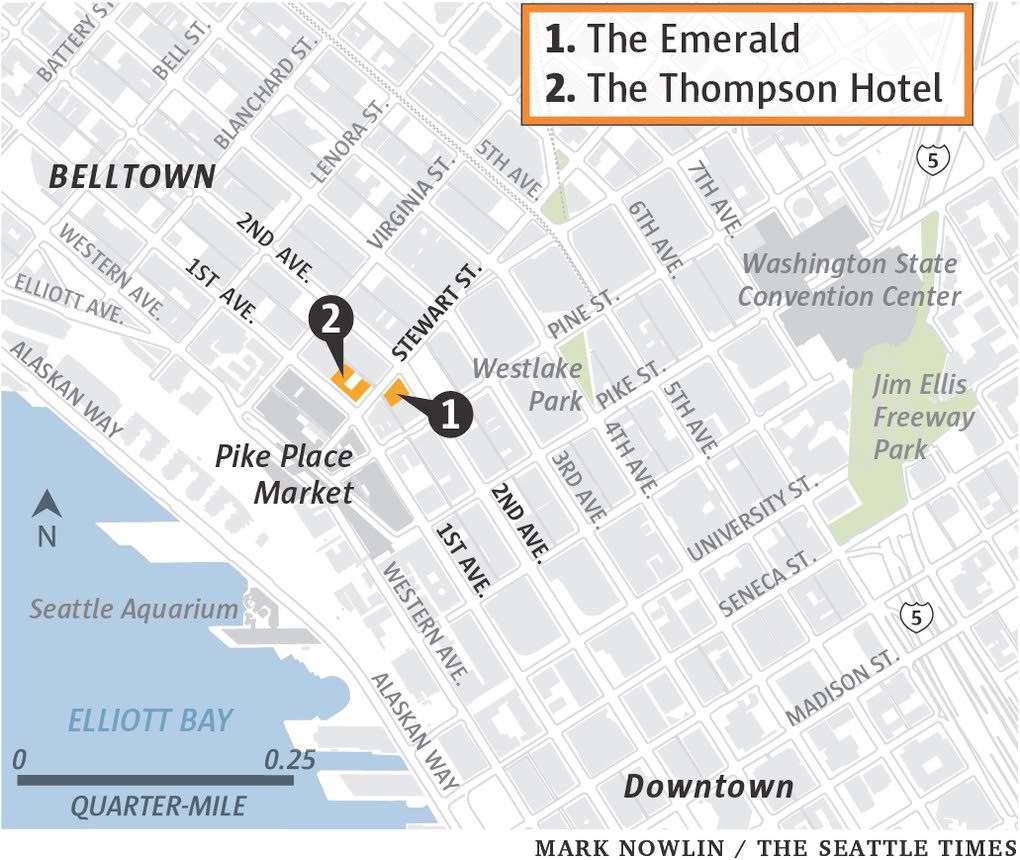 The Emerald, a 40-story condominium tower near Pike Place Market, gambled that high-end buyers might be willing to live a car-free lifestyle. Months before its scheduled opening, it appears that gamble hasn’t paid off.

Seattleites want to live more like Manhattanites. Or at least, that was the gamble made by developers of The Emerald, a 40-story luxury condominium near Pike Place Market, when they decided to include fewer parking stalls than any comparable new residential tower in the city.

But it looks like even Teslas on demand and the thrill of sharing an address with the priciest listing on the waterfront aren’t enough to prompt potential buyers of Seattle’s luxury condominiums to give up their cars.

The relative dearth of parking at The Emerald has been jeopardizing sales there, local condo brokers say.

A mere 62 parking stalls will serve the 40-story building’s 262 residences, the lowest stalls-per-unit ratio of any new residential tower downtown. Coincidentally or not, The Emerald has attracted fewer preopening buyers than Seattle’s average under-construction condo.

That flies in the face of years of predictions from developers and brokers that a critical mass of Seattle’s condo buyers are ready to go car-free.

Their forecasts built on trends in the low-end apartment market, where entirely parking-less projects catering to young, unencumbered Seattleites filled up quickly.

It seems clear, though, that for the present, the wealthy — and many of the not-so-wealthy — still demand the option to park.

“Any developer in the last two years who bought into the idea that parking wasn’t important missed the mark,” said Windermere broker Jeff Reynolds, who focuses on the Seattle condo market.

Buyers have reserved about 25 percent of units at The Emerald in advance of the tower’s summer opening, according to Nasvik.

Compare that to the average presale rate for Seattle’s under-construction condo projects, which is closer to 55 percent across 15 buildings on the market, according to Dean Jones, owner of Realogics Sotheby’s International Real Estate.

Nasvik said presales at The Emerald had been slowed by a molasses-like condo market, not the relative lack of parking.

The days of buyers lining up to reserve a condo years in advance are long gone, but King County condo sales and prices were down only slightly in 2019, compared to 2018’s peak. Pending sales actually rose in that period.

The condo project has rolled out two options it hopes will entice potential buyers to cast aside their parking objections.

In April, The Emerald promised penthouse residents will be able to commandeer two shared Teslas. (The building has 22 penthouses, starting at $2 million.)

And last week, the condo said it would partner with The Thompson hotel across the street to secure long-term parking leases for 20 residents, at a rate of $375 per month.

Meanwhile, the 62 parking spots in The Emerald — available only to owners of penthouses and two-bed, two-bath units, which start at $1.5 million — are in such high demand they’re going for as much as $100,000.

The craze for parking at The Emerald comes after a decade of low parking construction in Seattle, spurred by a massive oversupply of existing parking, declining demand and code changes that exempted builders from including parking spots in construction in much of the city.

Researchers and real-estate brokers say they’re not surprised by The Emerald’s parking partnership with The Thompson.

In fact, it’s a good thing, said Michael Andersen, a senior researcher at the nonprofit Sightline Institute, where he writes about parking.

The city began allowing landlords to rent their excess parking stalls to people who don’t live or work in the building in 2017, part of a plan to better allocate underused parking — like the spaces at The Thompson, which Nasvik said were going empty because tourists increasingly rely on ride-share apps rather than rent a car.

“For god’s sake, if there are any empty parking spaces in downtown Seattle, let’s be using them instead of letting them sit empty,” Andersen said.

It also makes sense to Andersen that The Emerald would encounter more demand for parking than it could meet: Wealthy people are more likely to own cars.

But even among lower-end condos, which are more likely than ever not to offer parking, there’s not-insignificant demand for parking spots — despite assurances from some brokers that young buyers are interested in a low- or no-car lifestyle.

On Capitol Hill, recent condo project 750 On The Hill doesn’t have any parking. The condos there, 34 studios and one-bedrooms, go for around $400,000.

Though it opened a year ago, the building is one-third empty, which listing agent Victor Smith attributed to a condo market downturn. About half the residents own cars, he said, which they park on the street.

Across Lake Union, at the similarly priced Wal-lingford 45, with 48 studios and one-bedrooms, the building’s 20 parking stalls are selling for $50,000 each.

“It’s like everybody wants one,” Reynolds said. Even if they don’t plan to use the spots themselves, they bet guaranteed parking will add to the resale value of their unit.

But there are also indications that a growing minority of high-end home shoppers are willing to live without a vehicle. The price point at which condo buyers have the option to purchase a parking space has risen from about $500,000 half a decade ago to well over $1 million today, and it’s not as if demand for condos has cratered, Sotheby’s Dean Jones said.

“The market will ultimately dictate whether we see a Manhattan lifestyle,” Jones said.