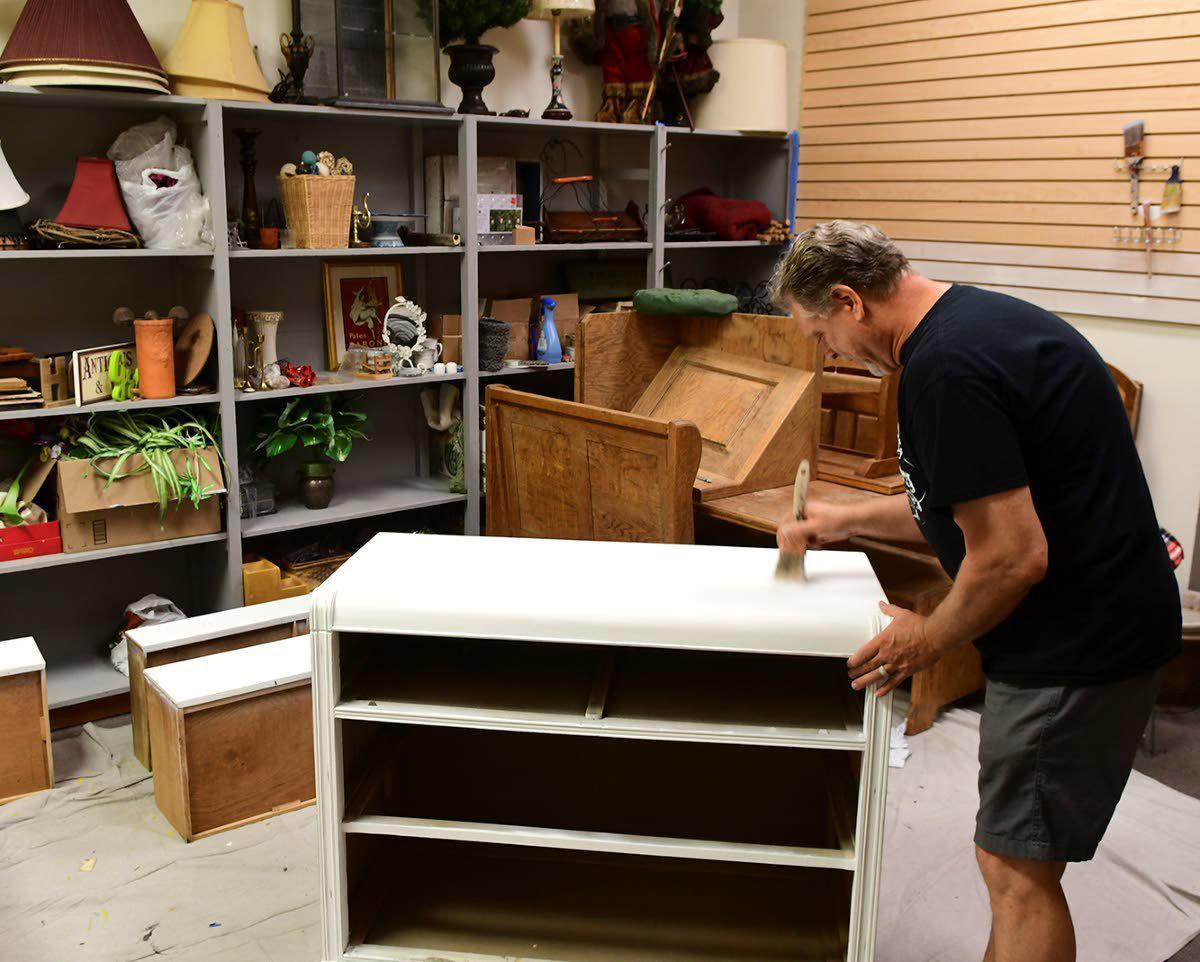 Ed King applies white paint to a dresser he is restoring. Reducing waste by keeping high-quality furniture out of landfills is one of the goals of his business. 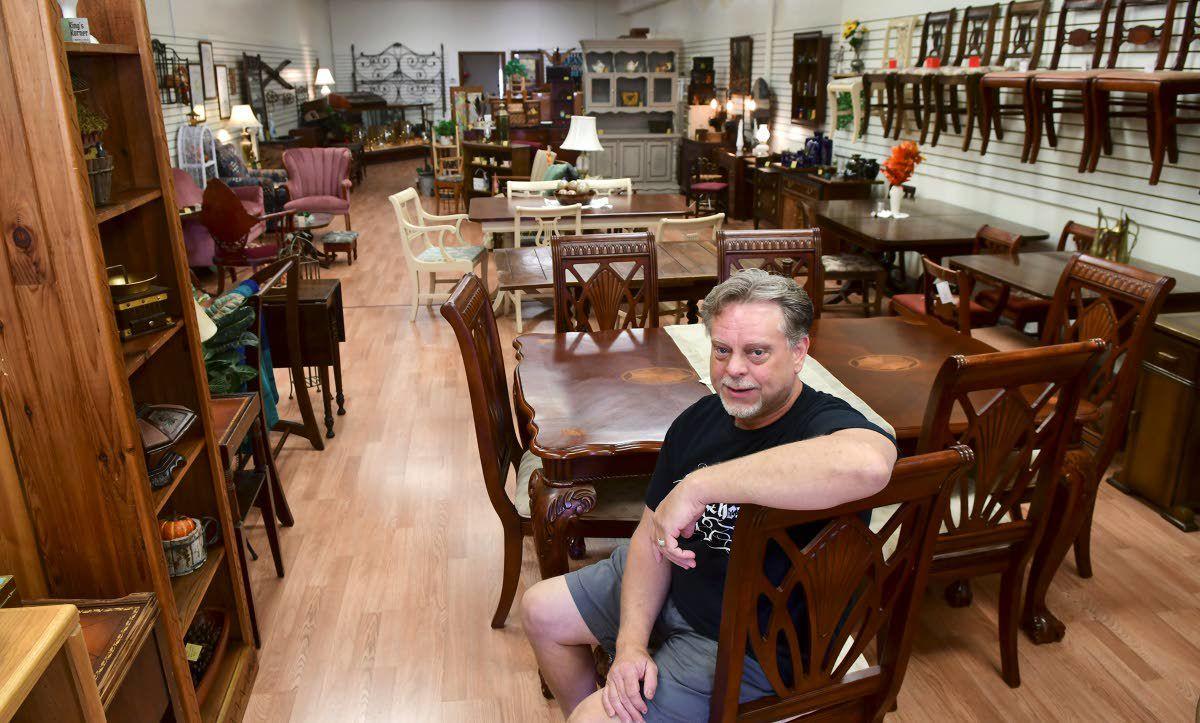 Ed King takes five at his business, King’s Korner at 828 Main St. in Lewiston. The store sells antiques, used furniture and pieces he has restored.

Ed King applies white paint to a dresser he is restoring. Reducing waste by keeping high-quality furniture out of landfills is one of the goals of his business.

Ed King takes five at his business, King’s Korner at 828 Main St. in Lewiston. The store sells antiques, used furniture and pieces he has restored.

Dressers with handles missing stand near more than a dozen scuffed tables and chairs, all with obvious issues.

The pile of furniture in various states of disrepair is at the heart of a novel approach Ed King introduced at King’s Korner, his recently opened used, vintage and antique furniture store in downtown Lewiston.

He’ll restore anything from what he calls the “pick pile,” or he’ll repair items customers bring to him.

“You pick your piece, and he refinishes it for you to match your decor,” said Michelle King, his wife and business partner.

The business model allows the store to sell solid wood tables, chairs, desks and bookcases at prices that are often significantly less than similar, brand-new items.

It also prevents pieces that poten-tially have decades of life left in them from going to the landfill.

Sometimes the result is something that looks dramatically different from the original. King recently took a tired, dark-brown hutch from the 1980s and updated it with a black and red color scheme to give it a country-chic vibe ($198).

Other times, he tries to give pieces the same kind of look they had when they were new.

That was what he did with a mahogany sideboard ($275) from the 1930s or ’40s. It likely would have been used in a dining room to store dishes and as a staging area during meals for food, like dessert, that didn’t fit on the table. The exterior had faded to an ugly yellow, and he refinished it in a deep brown.

“You just make it beautiful again,” he said.

The price depends on the piece and how much work is needed, with most running between $50 and $500.

One is a walnut wood gentleman’s chest ($750). It has drawers at its base and a marble shelf in the center at the bottom of a mirror. It likely was built around 1800 to store socks and pants and would have been placed in the bedroom of a wealthy man.

A few feet away is a small walnut hutch ($498) with carved decorative inlays from the mid-1800s.

The mix is attracting a wide variety of customers that includes young families on tight budgets and professional home decorators seeking custom pieces to mesh with specific themes.

King’s skills come from more than a quarter century of working in the furniture industry.

He began at the former Boyer’s Furniture, in Clarkston, where he was sent to a workshop sponsored by a furniture maker who taught him how to repair finishes. He enjoyed that enough he pursued it as a hobby while he held jobs at places like Follett’s Furniture and most recently Skelton’s Carpet One Floor & Home, where he sold carpet.

While selling furniture, he learned about materials and methods used by different manufacturers, helping him know the pieces with good bones and ones that are junk.

His wife was convinced he was talented enough to go into business for himself after he revived her grandmother’s dining table, that she had been cleaning with a bleach-based product not intended for wood. The varnish had turned into a substance with the consistency of bubble gum.

King carefully scraped and sanded the top of the maple wood table and applied a new cherry-brown finish.

“Those things that are built to last need to stay,” he said.

So far the public agrees. After fewer than two months in business, the store is breaking even, and he has a four-week backlog of items to fix.

“What I want to create is something that has real value,” he said.

About the Kings: Ed King owns another business, King’s Cajons, that sells box drums. He plays the trumpet for the Katz Band, which plays 1980s and ‘90s cover tunes. After a short time as a professional social worker, he works on projects as a volunteer aimed at ending teen homelessness.

His wife, Michelle King, works full time as a sales associate for Wide Orbit, a company that sells software to radio stations nationwide.