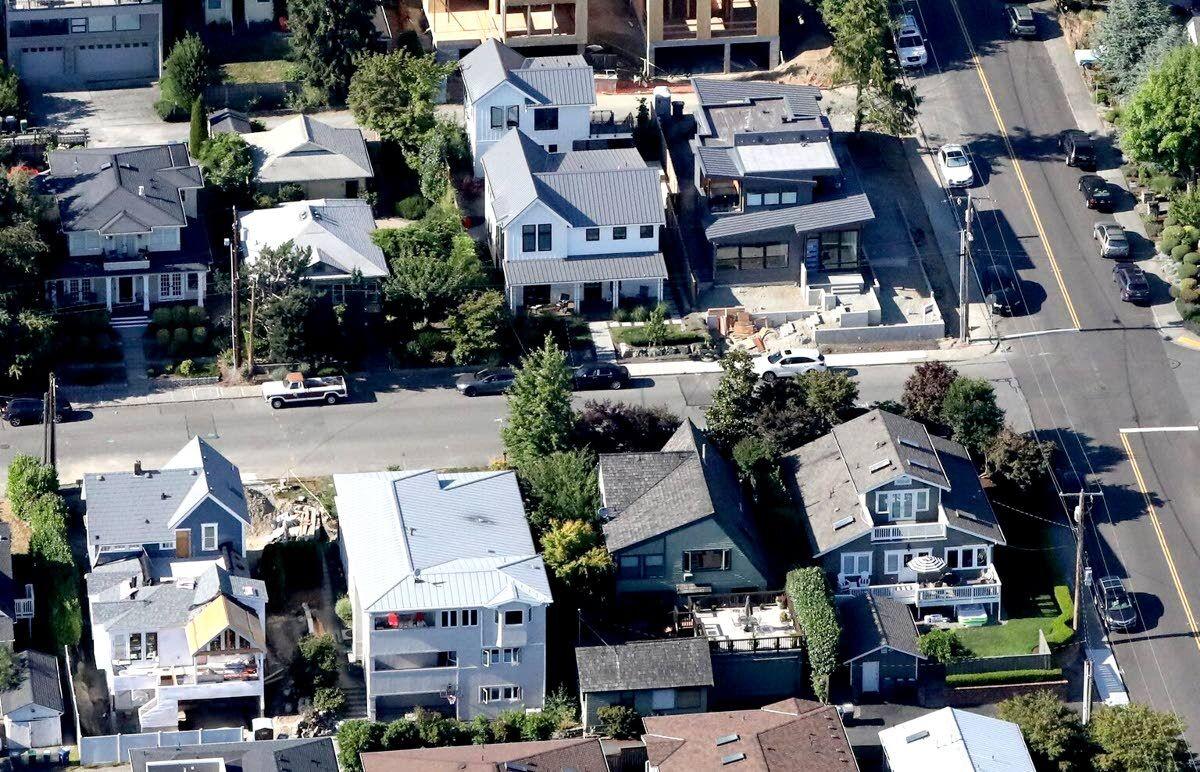 New construction is seen in this aerial view of the east side of Lake Washington. Even as the pandemic rages on, home sales and prices are healthy in the Seattle area. 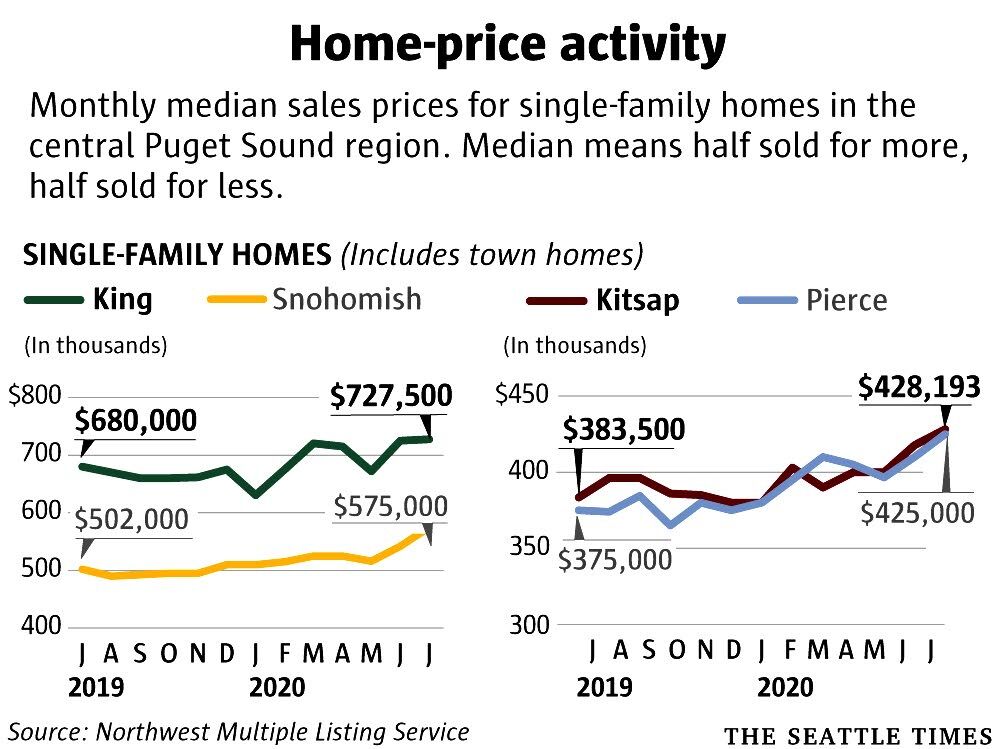 New construction is seen in this aerial view of the east side of Lake Washington. Even as the pandemic rages on, home sales and prices are healthy in the Seattle area.

SEATTLE — Squeezed up by a combination of low supply and high demand, home prices broke records in nearly every major Washington county last month, even as the pandemic’s onslaught continued to wreak havoc with other parts of the economy.

Fewer homes were on the market last month than in any July for a decade, as potential sellers chose to refinance rather than enter an overheated market. Demand, though, hasn’t waned, as buyers look to take advantage of historically low mortgage rates.

In King County, the median home sold for $727,500 last month, an increase of 7.2 percent year-over-year, and more than the previous record of $726,275 in May 2018, according to new data from the Northwest Multiple Listing Service.

Prices popped even faster in other key Western Washington counties.

Homes are selling so quickly that 45 percent of buyers have made offers on houses they’ve never visited in person, according to research from Redfin. Precautions to cope with the pandemic, including lockdown measures and rules allowing only two people to tour a home at a time, have also contributed to the rise in sight-unseen offers.

Aparna and Mayank Shekhar decided to move to the Seattle area from California this spring, after Mayank was offered a job at Microsoft. One complication to their home search: Bay Area “shelter-in-place” ordinances restricting travel. Instead of looking at homes in person, the Shekhars toured nearly a dozen properties virtually, on FaceTime or WhatsApp calls with their agent Meirav Yaaran of Redfin — and made offers on five of them, including the one they moved into last week.

But the pandemic wasn’t the only reason the Shekhars didn’t wait to see homes in person before making offers. Buyers are routinely facing bidding wars and homes often sell in a week or less.

The sizzling housing market is in sharp contrast to more generalized economic pain wrought by the pandemic. While new unemployment insurance claims dipped last week to the lowest level since March, the weekly claims number is still four-and-a-half times the level of last year at this time. And experts warn of a tough fall ahead, if case counts continue to rise.

That economic malaise hasn’t infected the housing market, where an unprecedented eight counties last month saw less than one month’s worth of inventory, a measure of how long it would take to sell all the homes on the market at the current pace of activity.

“In Seattle at that price, you’re looking at a two-bedroom condo, if you’re lucky,” DeHaas said. Lucky indeed. After months of surging prices, the typical downtown Seattle condo now costs $681,750, an increase of 5 percent compared to last year.

Prices surged across most King County markets, with the typical Seattle home selling for $805,000 as prices rose 6.6 percent from a year ago. Price growth was even stronger elsewhere.

On the pricey Eastside, the typical home sold for more than $1 million, an increase of 9 percent from 12 months ago. In more affordable South King County, prices rose more than 17 percent in some neighborhoods, with increases highest east of Interstate 5 in cities like Auburn, Kent and Renton.

There are signs, though, that the market may be loosening up. For the first month since the start of the pandemic, more sellers put their homes on the market in July than in the same period last year. The number of transactions inked in July was also higher than last year, for the second month in a row.

The recent uptick in listings, though, is still “well below what we need to meet the volume of buyers right now,” said Matthew Gardner, chief economist at Windermere Real Estate.

Rock-bottom mortgage rates have fed much of the demand. Underwriting standards for making loans have tightened, but home shoppers with good credit and well-paying jobs — such as those in region’s software and biotech sectors, which continue to expand while other industries are battered by the pandemic downturn — are able to secure mortgage rates less than 3 percent, brokers report.

Pandemic aside, it’s not surprising that so many of those buyers are willing to forgo an in-person tour, Yaaran said. Between late 2017 and autumn 2018, a period spanning another housing market frenzy, a similarly high proportion of home shoppers, 42 percent, made offers sight unseen.

If buyers “like a house, they need to make a decision now, the second they see it. The inventory doesn’t allow buyers to diddle-daddle in their decision,” Yaaran said.

The Shekhars said the pandemic factored into their decision-making about the kind of home they were looking for: Large, with a yard for their toddler.

“Because of COVID, you can’t go out that often,” Mayank said. “The only problem was, everyone else was looking for a yard, too, it seemed.”

The process of shopping online for a nearly $1 million purchase wasn’t always easy, the Shekhars said. The video sometimes cut out, or was grainy, or didn’t give a sense of the size of the home.

But between the video tours and 3-D visualizations of the home, Aparna said, “we didn’t feel disappointed” when the couple arrived at the house for the first time recently — one day after they signed the closing paperwork on a contemporary three-bedroom Sammamish home for the $975,000 list price.