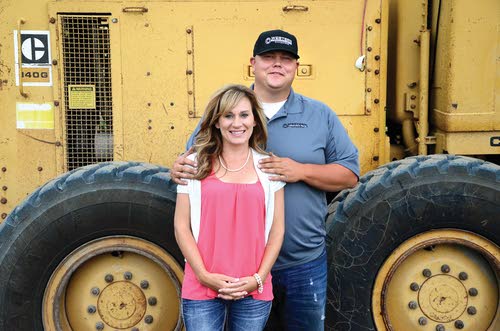 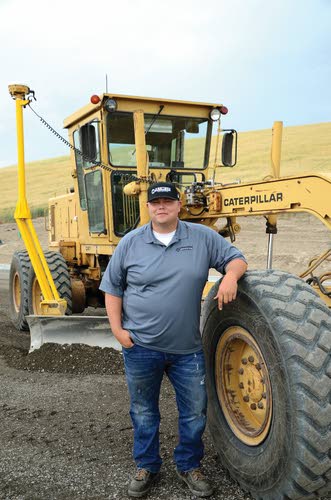 Case Stedham, owner of Western Construction, works out of a pickup truck but also is comfortable on road graders and other heavy equipment.

Case Stedham, owner of Western Construction, works out of a pickup truck but also is comfortable on road graders and other heavy equipment.

Case Stedham readily acknowledges the less than traditional path he took to becoming an entrepreneur.

He stopped attending classes in his junior year of high school, then worked at B & B Autobrite before his dad hired him. The fit was so perfect that in about a decade Stedham was helping his dad run the company, before purchasing its assets last year.

"I do wish I would have gotten (my high school diploma)," Stedham said. "I don't regret it because I'm really happy with the way things turned out and where I'm at now."

Today Stedham is the owner of Western Construction of Lewiston, which has landed a number of significant projects in the past year.

Among them are completing infrastructure at the Port of Clarkston's Turning Pointe Industrial Park and being a major subcontractor during the expansion of the Port of Lewiston's container dock last year.

Treating employees well is an important part of his strategy.

"We pay very good wages," Stedham said. "We pride ourselves on that. It's nice to take care of your guys."

The initial success marks the beginning of something larger, Stedham said. "I'm young. I love doing it. I've got a lot of ambition."

Business Profile talked with Stedham about how his dad helped him get his start, developing his young business and the city of Lewiston's settlement with his father's company on the Snake River tunnel project.

Business Profile: How did you get involved with your dad's company?

Case Stedham: He put me to work after I stopped attending high school. At first he didn't because he wasn't that happy that I didn't finish what I was supposed to do.

I liked going to school to see all my friends. It just didn't work out for me. I just screwed off too much. All my teachers and principals, we all got along great. We spent a lot of time together in the office. There were never any bad feelings. I'm thankful I turned out OK, but I'm definitely not very proud of it. When I went to work that's all I did. I helped my dad run his company for its last five years at least.

BP: You started your own company on June 1, 2013, and bought out the equipment, land and rock pit from your dad. How have you taken the company in a different direction?

CS: We've over tripled our business since June from what we used to do at Western Construction and Excavation.

We've geared up with different equipment, updated later technology, more late-model equipment. We've invested a lot into GPS technology. It takes a lot of the guesswork out of dirt work. It allows us to do a lot of our own surveying. It allows inexperienced and/or young employees to know where they're at in relation to grade on the job in real time, all the time. We don't have a ton of experienced people on the job because we're a young company. So it benefits us a lot more than most. If you have been doing this for decades, you know that intuitively.

BP: What jobs are you working on right now?

BP: What's your take on how the economy is doing?

CS: The work climate has been really good. There's been a lot of work to bid on. Right here in the Inland Northwest, especially in the Lewiston-Clarkston Valley, I think we've got and always have had our own economy. What's going on in the big picture doesn't necessarily affect us much, I don't think. We're a pretty self-sufficient community. It's been great. It seems like a lot of people are building all over the place, Moscow-Pullman, Lewiston-Clarkston, Grangeville.

CS: Nothing out of the ordinary. We constantly do things that are new to us that are within reason. We wouldn't try to change out the turbines in one of the dams. I get really deep into the bids and study them the best I can. I do it two or three times and figure out any kind of competitive edge that we might have above someone else. Bidding is all about how much you're willing to risk.

BP: Where do you see your company headed?

CS: I wouldn't like to change our geographic area at all, and if so, not by much. It's pretty nice for the guys to be home at night. As far as growth, absolutely yes. We're not trying to be a monster overnight. We're just trying to be consistent and accurate, with a steady pace of growth.

BP: When you worked at your dad's company, Western Construction and Excavation, it won the bid on the Snake River Avenue tunnel. That company received a $207,545 settlement from the city of Lewiston, including more than $100,000 in attorney fees in connection with the project. In retrospect, would you have taken it on had you known how it would unfold?

CS: Hell no. We lost money. I could go on for days about this one. The plans for the project that we bid from showed very little rock, which was manageable with equipment we already had. Once we got to digging, there was just a lot more rock than what they depicted in the plans and it was very, very hard rock. Once we hit that, the city really didn't know what they wanted to do about it right off the bat. An amphitheater that was supposed to be part of the project, that didn't work out. It was not a good experience. We had to rent and buy equipment to finish the project. We lost a couple key employees because it was so messed up they weren't getting full weeks. I didn't blame them.

Number of employees: Between 30 and 50 during its summer peak.

Work history: Dishwasher at Mighty Potato, a Lewiston restaurant that’s no longer open; employee of B & B Autobrite in Lewiston; employee of Western Construction and Excavation for about 15 years.