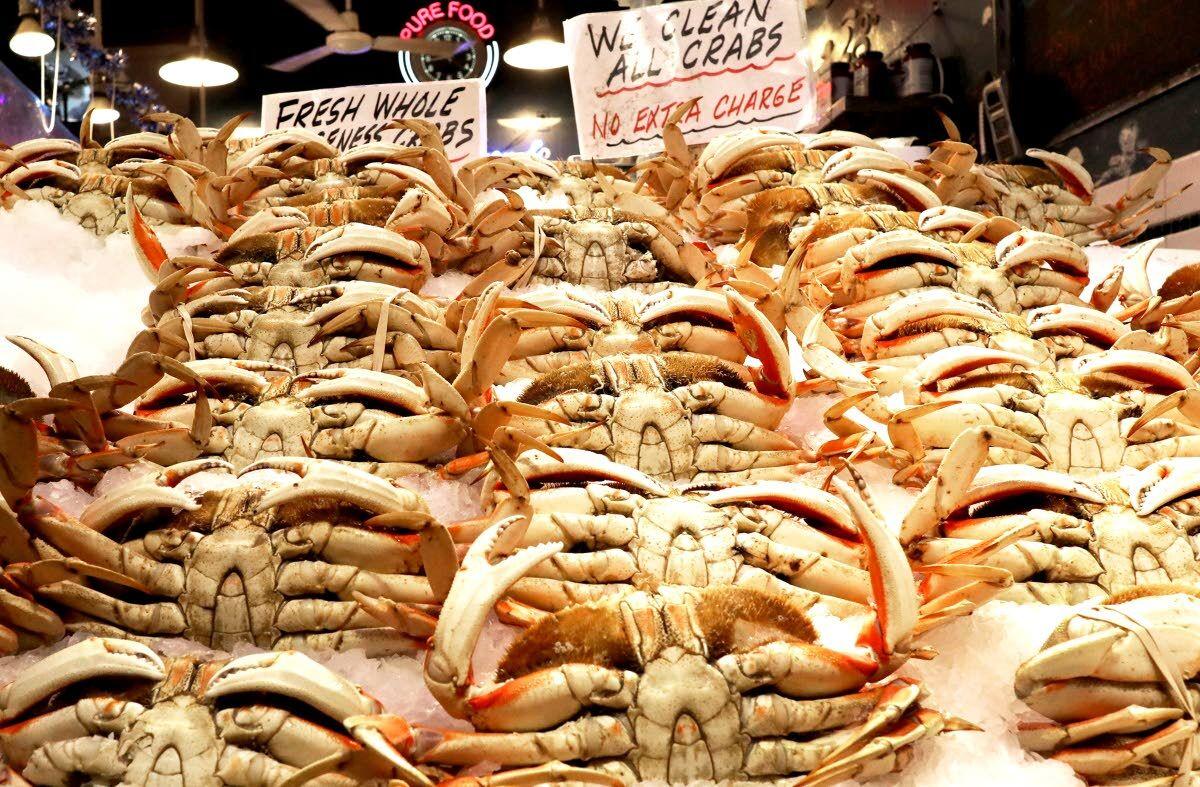 Cooked, whole Dungeness crabs were selling for $24.50 a pound late last month at Pure Food Fish Market in the Pike Place Market in Seattle. Crabs averaged about 2 pounds each. 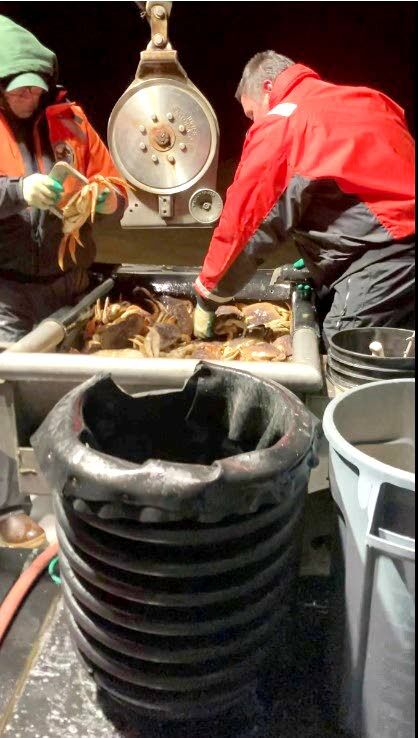 Clayton Parson and Travis Haring measure crabs and examine shell conditions before a Dec. 1 opening in an area south of Klipsan Beach in Washington.

Cooked, whole Dungeness crabs were selling for $24.50 a pound late last month at Pure Food Fish Market in the Pike Place Market in Seattle. Crabs averaged about 2 pounds each.

Clayton Parson and Travis Haring measure crabs and examine shell conditions before a Dec. 1 opening in an area south of Klipsan Beach in Washington.

Some 60 vessels in Washington’s oceangoing crab fleet worked through a stormy December to bring in more than 4.69 million pounds of Dungeness in a strong start to the annual harvest.

For fishers, processors and retailers, this is a welcome change from the past six years when the season hasn’t started until Dec. 31 or later because of the lack of meat in the crabs or the presence of domoic acid, a marine biotoxin.

The Dungeness crab, as well as shrimp and razor clams, have benefited from improved ocean conditions of the Northwest coasts with strong cold-water upwellings of the past year bringing nutrients and helping to strengthen the base of the marine food web.

“It’s an exciting time to be a shellfish biologist with all these species doing well,” said Daniel Ayres, coastal shellfish manager for the state Department of Fish and Wildlife. “It’s fun for a change.”

The ocean harvest has unfolded in a stretch of coastal waters from Klipsan Beach south to the Columbia River. Catches, as is typical, were strongest during the first few days after the Dec. 1 opening, and then dropped off. Anglers also have had to endure some tough, chilly weather during the final weeks of 2021.

“We’re all from Alaska so it seems pretty normal to us,” said Daniel Crome, who was raised in Petersburg, Alaska, and fishes out of Westport with a five-person crew that — as the catch rates dropped off — was cut to four.

Back at the docks, these Dungeness have fetched $4.75 a pound or more. For crabbers, this continues an upward trend in prices from a half decade ago, when the first month’s catch brought an average of less than $2.90 a pound, according to WDFW statistics.

Dungeness also are being caught in tribal harvests, as well as by commercial crabbers in Puget Sound, Oregon and British Columbia. On Tuesday, a larger swath of the Washington coastal waters will open for Dungeness and bring more commercial boats into the fishery, which retains males that must meet a minimum length.

This will expand supplies in Northwest markets for those craving fresh-caught Dungeness to help usher in what will hopefully be a healthier year. In December, retail prices varied.

In the week before Christmas, a Seattle Safeway offered the whole cooked Dungeness for a sale price of $7.99 a pound, discounted from $14.99 a pound. Seafood lovers snatched them all up and, as of last week, were still awaiting more crab, according to Konstantine Tigishvili, meat manager of the Lower Queen Anne Safeway.

At Pure Food Fish in the Pike Place Market, Dungeness crab sold for $24.50 a pound the last week of December, which can push the price of a whole crab past $40.

Neal Brebner, Pure Food’s manager, said that the December fresh crab have been a welcome change from years past when Pure Food has only had frozen crab to offer customers.

“They are beautiful, nice and full, and we are buying them from wherever we can get them,” said Brebner, who expects retail prices will to dip this month as supplies expand.

The Dungeness harvest will continue deep into 2022, but catches decline sharply later in the season, and many crabbers will move on to other harvests.

In Washington, Dungeness remain a pillar of the seafood industry. From 2014-19, coast-caught Dungeness was worth an annual average of $45 million, according to WDFW. In the 2017-18 season, Puget Sound commercial Dungeness crabbers’ catch was valued at $13 million.

The Dungeness also are important to Washington tribes. They have treaty rights affirmed by court decisions to 50% of the harvestable shellfish in their usual and accustomed fishing grounds that encompass about half of the Washington coastline. WDFW manages the commercial and recreational harvests in cooperation with tribal harvest officials.

In recent years, Pacific Northwest Dungeness sales have been buoyed by demand from China and other Asian markets. This year, Asia sales have been more difficult because of COVID-19 restrictions and delays in overseas shipping amid clogged ports and container shortages.

“Most everything is going into domestic markets,” said Mike Cornman, president of Westport Seafoods, who operates a crab processing plant employing 40 people.

“It’s an exciting time to be a shellfish biologist with all these species doing well. It’s fun for a change.”