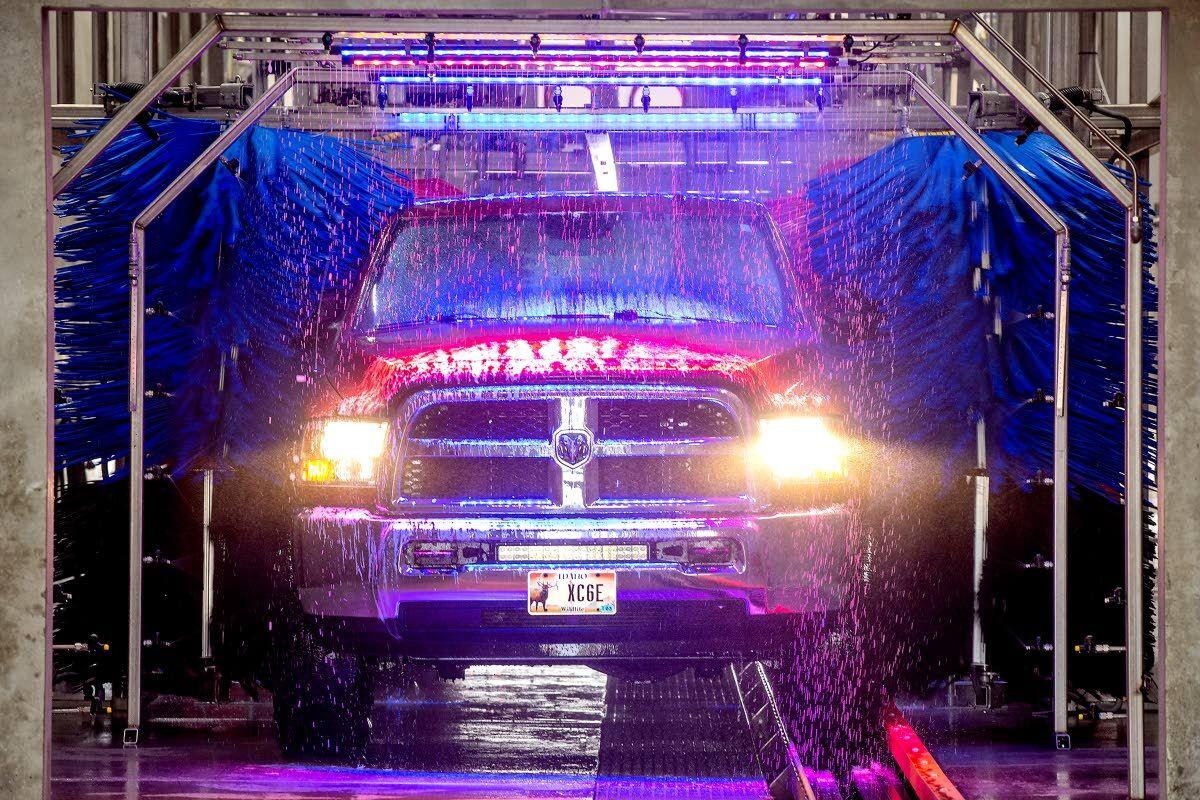 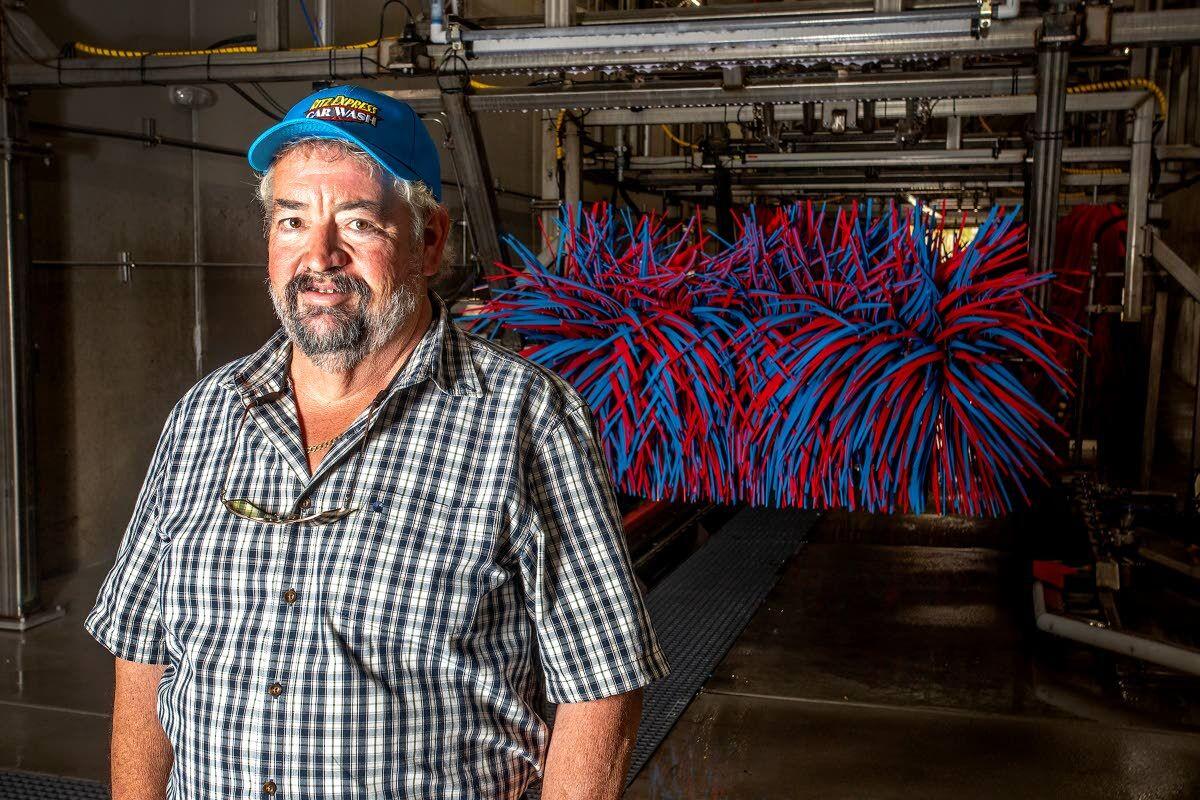 August Frank/TribuneSteve Carlton, the owner of Ritz Express Car Wash, stands for a photo in the tunnel of his business. 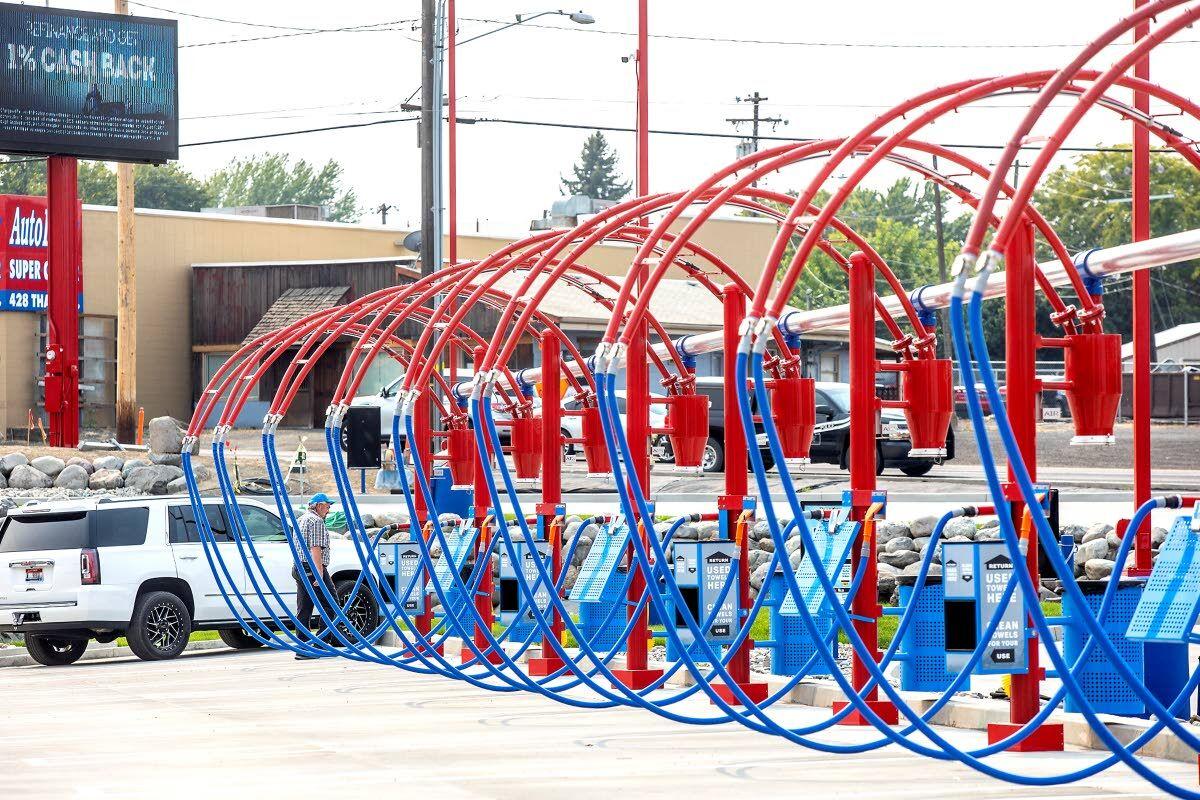 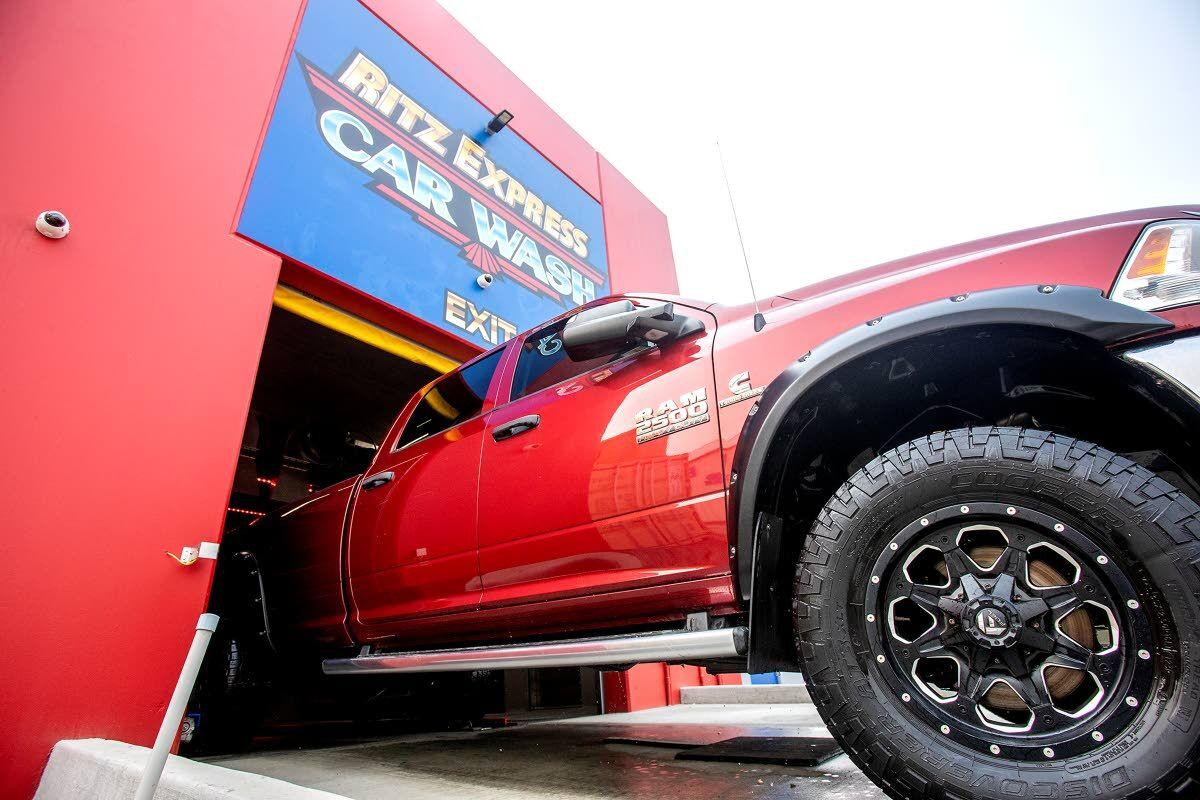 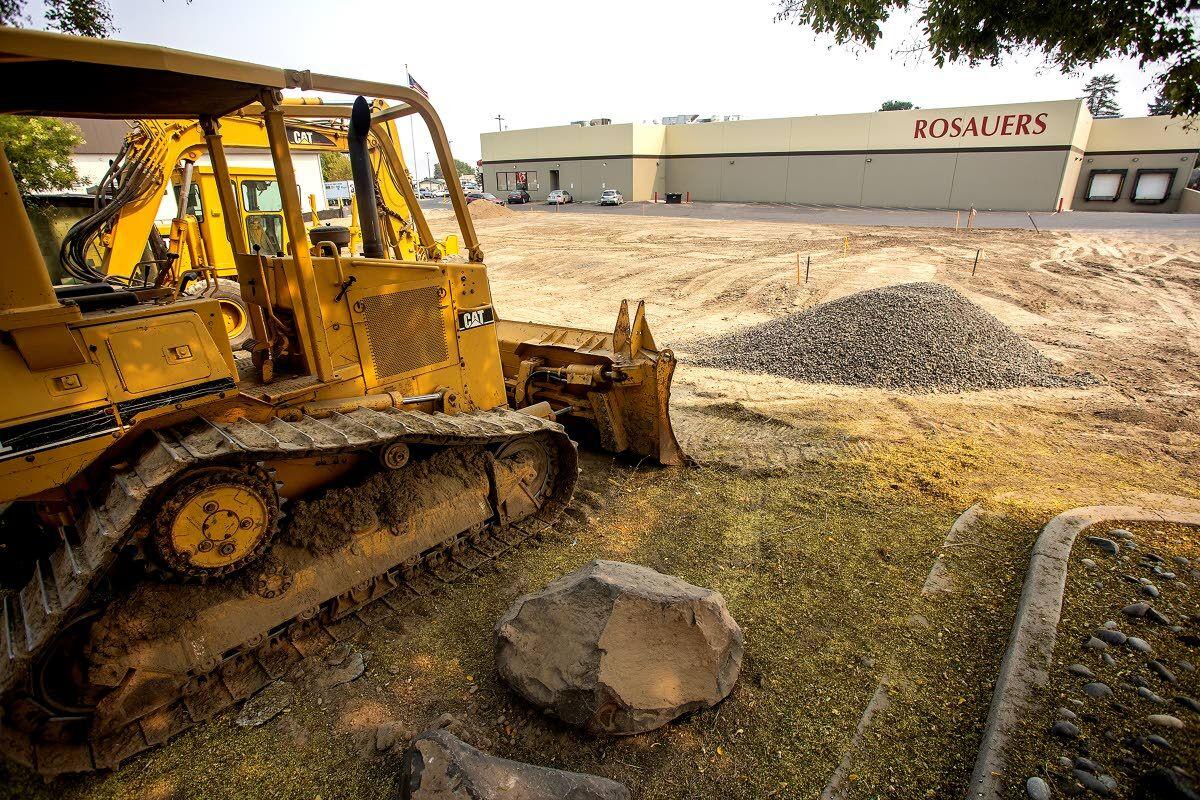 August Frank/TribuneConstruction vehicles sit at the edge of an empty lot by Rosauers in the Lewiston Orchards that will be the new location of BA Nutrition and Fitness. 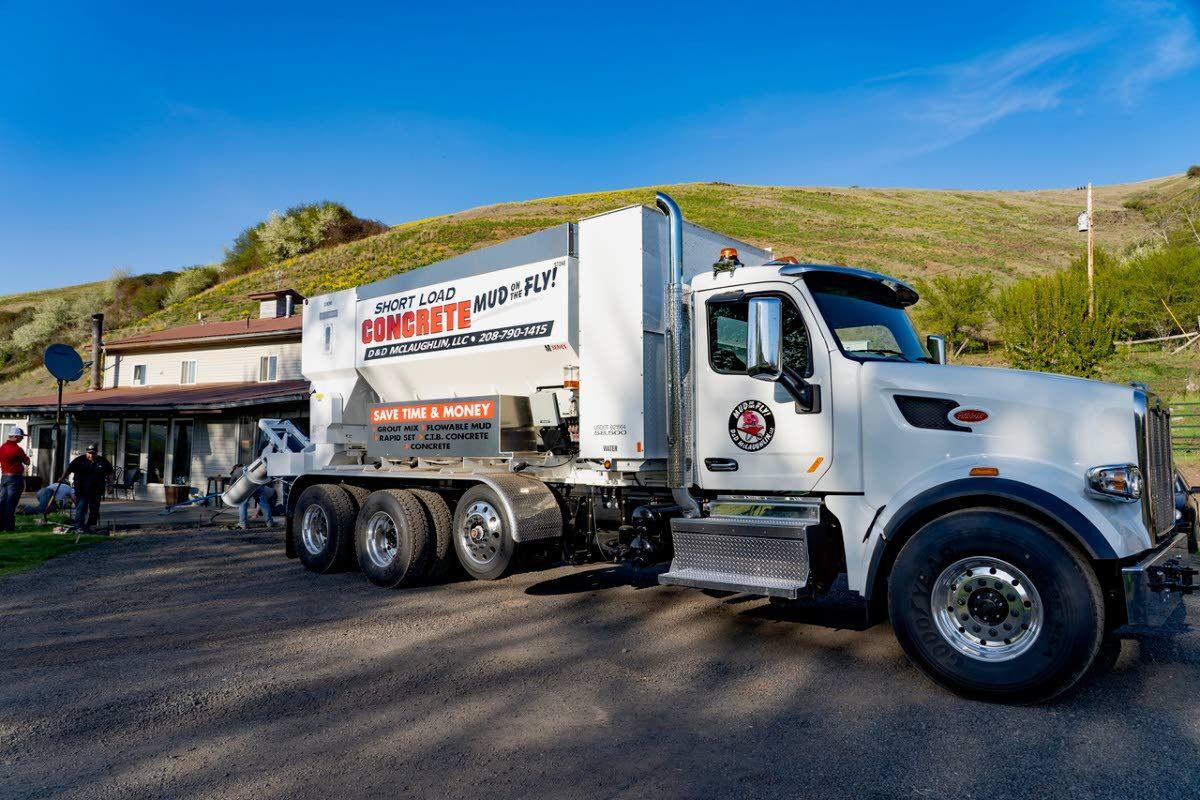 D & D McLaughlin has acquired this truck with a mobile concrete mixer for a new part of its business called Mud on the Fly. 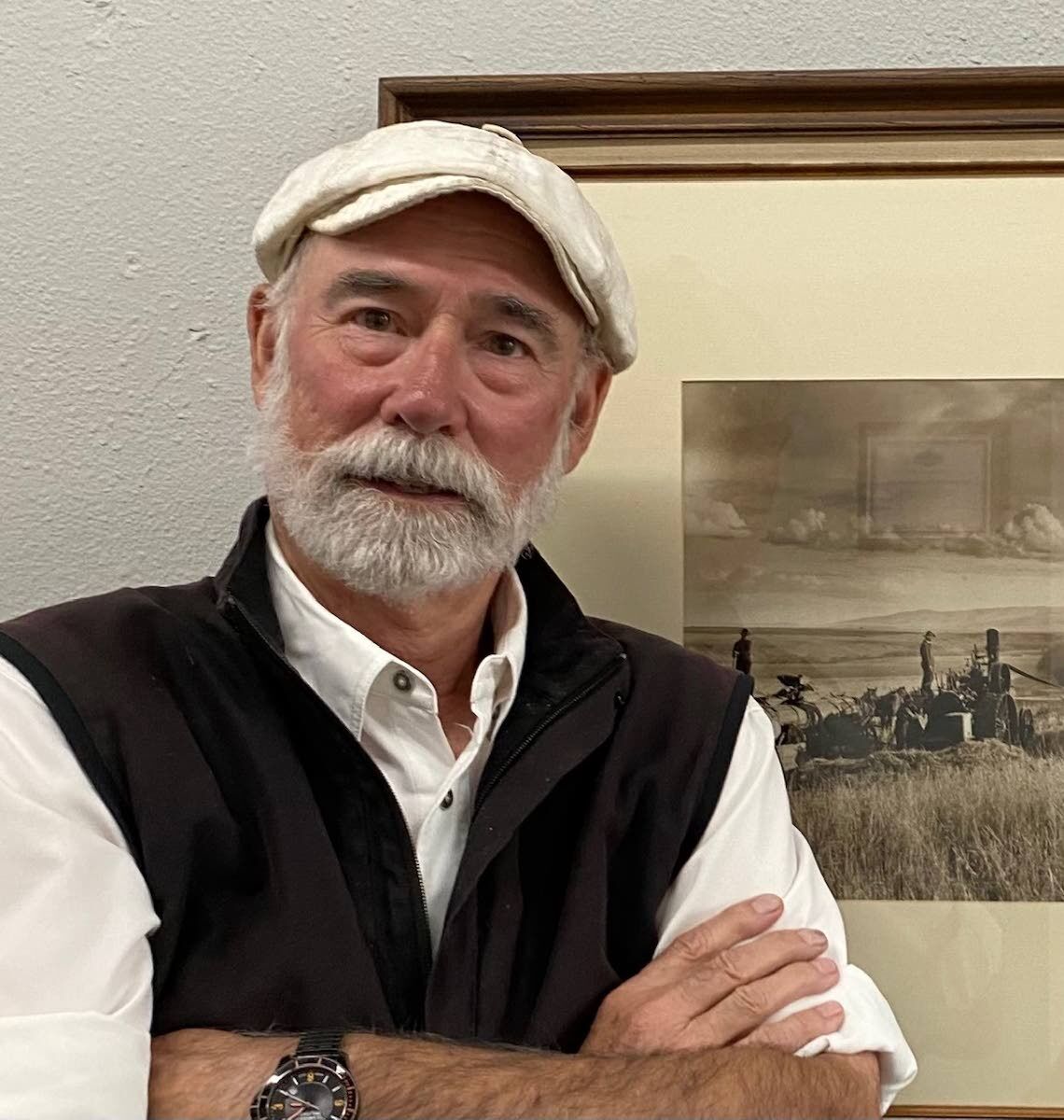 August Frank/TribuneSteve Carlton, the owner of Ritz Express Car Wash, stands for a photo in the tunnel of his business.

August Frank/TribuneConstruction vehicles sit at the edge of an empty lot by Rosauers in the Lewiston Orchards that will be the new location of BA Nutrition and Fitness.

D & D McLaughlin has acquired this truck with a mobile concrete mixer for a new part of its business called Mud on the Fly.

A new automated car wash in the Lewiston Orchards can clean the exterior of vehicles in 3 minutes and 6 seconds.

“People can wash their cars on their way to work,” said Steve Carlton, the owner of Ritz Express Car Wash at 409 Thain Road.

The most expensive option has 11 steps for the outsides of vehicles, including an extreme gloss tire shine, ceramic deep shine and polish, underbody blast and a bug treatment.

All washes come with the use of self-service vacuums, drying towels and mat washers at Ritz Express.

Monthly memberships are available that allow customers to wash their cars as often as every 24 hours for a deeply discounted price. Membership holders don’t have to present identification because their cars are automatically recognized by their license plates.

The business accepts debit and credit cards as well as cash through an automated touch-screen kiosk at the entrance. It is open 8 a.m. to 6 p.m. Monday through Saturday.

Carlton got the idea for the car wash when he used one like it in Coeur d’Alene and hired the same architect to design the building.

“We wanted the best you could buy,” he said.

Ritz Express is one of several businesses Carlton owns. He’s a building contractor who has a venture that sells and leases shipping containers for storage and office space on construction sites.

Construction is underway for an expansion of BA Nutrition and Fitness in the Lewiston Orchards.

The business is located at 1032 Bryden Ave., and will move about one block to the west on the same side of the street as Rosauers when the project is finished, hopefully by March, said Amanda Klempel, a physical therapist who owns the business with Bailey Harrison, a nutrition consultant.

The new building will be 4,800 square feet, 1,000 square feet larger than the business’ present location, and have room to expand.

The upgrade also is giving BA Nutrition and Fitness the opportunity to own its land and building, instead of leasing.

Klempel has been a physical therapist for more than 15 years, and she formed BA Fitness with Harrison 2½ years ago.

The upcoming move isn’t the only change for the business.

Earlier this summer, Travis Walker became an independent contractor with BA Nutrition and Fitness. His venture, Complete Fitness, shares space with BA Nutrition and Fitness. Walker moved because Mall 21 on 21st Street, where he was previously, is going to be dismantled for an expansion of Lewiston’s Rogers Subaru, which is adjacent to the now vacant shopping complex.

LAPWAI — The acquisition of a truck with a mobile concrete mixer is allowing a Lapwai business to complete small projects, including ones in remote areas.

D & D McLaughlin has been doing excavation for close to 30 years for homes, commercial buildings and highways, said the owner, Duane McLaughlin.

This year, the venture added Mud on the Fly, which completes jobs that require 1 to 8 yards of concrete, such as sidewalks, backyard patios, dog runs and post holes for pole barns.

The truck combines sand, rock, water and powder for concrete when it reaches a site instead of hauling already-mixed concrete from a plant, that can begin to lose strength after about 90 minutes, McLaughlin said.

That means he can complete work in remote areas such as Dent or Pierce, he said.

Often the work can be done in as little as 15 to 20 minutes because of the equipment and skills he has, McLaughlin said.

He also can be hired to be on standby in instances where builders aren’t sure of the exact time they will need concrete.

“Basically, I’m a batch plant on wheels,” he said.

Additional information is available at mudonthefly.com.

GRANGEVILLE — A former civil engineer and business owner is the new director of the Idaho County-Lewis County Economic Development Council.

An economist, Tim McDonald is responsible for efforts that help develop new businesses, keep existing ventures in the area and support commercial expansions.

“He will also lead efforts to address issues that inhibit business development such as inadequate high-speed internet service, housing shortages and the lack of childcare services,” according to a recent newsletter from the Clearwater Economic Development Association.

A previous Peace Corps volunteer in Ethiopia, he has operated several businesses. One venture helped heavy construction contractors by compiling lists of projects that needed or were getting rid of dirt. Another developed a drinking water purification system operated by solar energy that was used in refugee camps.

Guelcher joined the center last year as a business consultant and is replacing Barbara Leachman, who is retiring Thursday.

Prior to taking the position as a business consultant, Guelcher practiced law for more than 15 years, often counseling business owners. He also has been a SCORE certified mentor, helping people start, run and grow ventures.

A not-for-profit group and resource partner with the U.S. Small Business Administration, SCORE is the nation’s largest network of business mentors, according to the group’s website.

PULLMAN — College Hill has released a new beer to help raise money for a Washington State University scholarship for students in the school’s wine and beverage management program.

The beer is called “We Always Find Our Way Back Home, Even if it’s a Little Hazy Pale Ale,” and is available by the glass and can at Paradise Creek Brewery and dozens of drinking establishments around Washington owned by WSU alumni.

The beverage is a traditional West Coast-style ale, with notes of stone fruit, light citrus and pine, according to a news release about the beer.

The brewery used hops from Yakima Chief Hops, a business that is one of the largest hops distributors in the world, said Tony Poston, president of College Hill.

Yakima Chief Hops collaborated on the project with Paradise Creek Brewery in Pullman, and College Hill, a Pullman business that designs graphics for clothing and other items.

This is the third year College Hill has raised money for a nonprofit cause with a release of a beer. Each time, the beer is created by a different brewery client, Poston said.

The idea originated during the holidays one year when his secret Santa gave him a high-quality six pack of beer. The gift made him think that an upper-end beer could make a great fundraiser.

The effort meshes well with what College Hill does. It got its start designing logos for WSU and college campus groups.

As students graduated and started their own businesses, they continued to use College Hill, allowing the business to serve clients such as farms, breweries and high-tech companies.