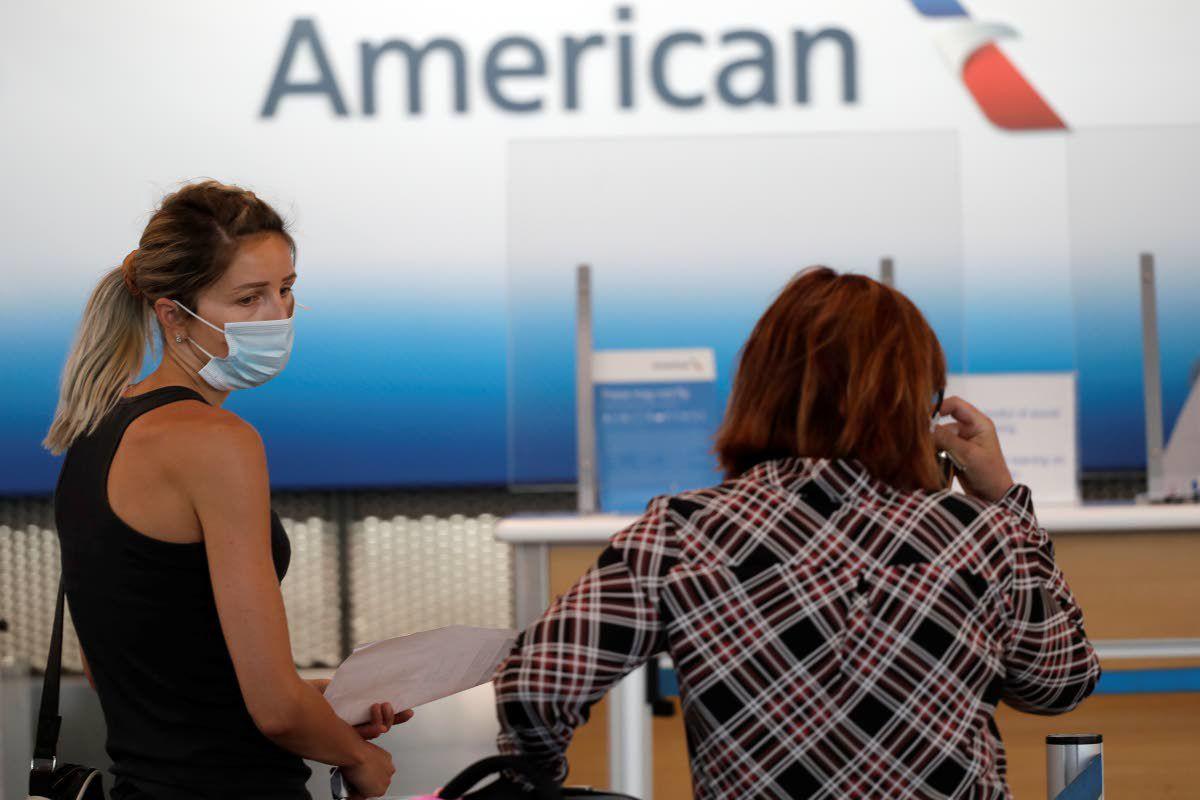 Travelers wear mask as they wait at the American Airlines ticket counter in Terminal 3 at O’Hare International Airport Tuesday, June 16, 2020, in Chicago. Beginning June 16 at American Airlines and June 18 at United Airlines, all passengers and crew members will be required to wear masks to prevent the spread of the coronavirus. (AP Photo/Nam Y. Huh) 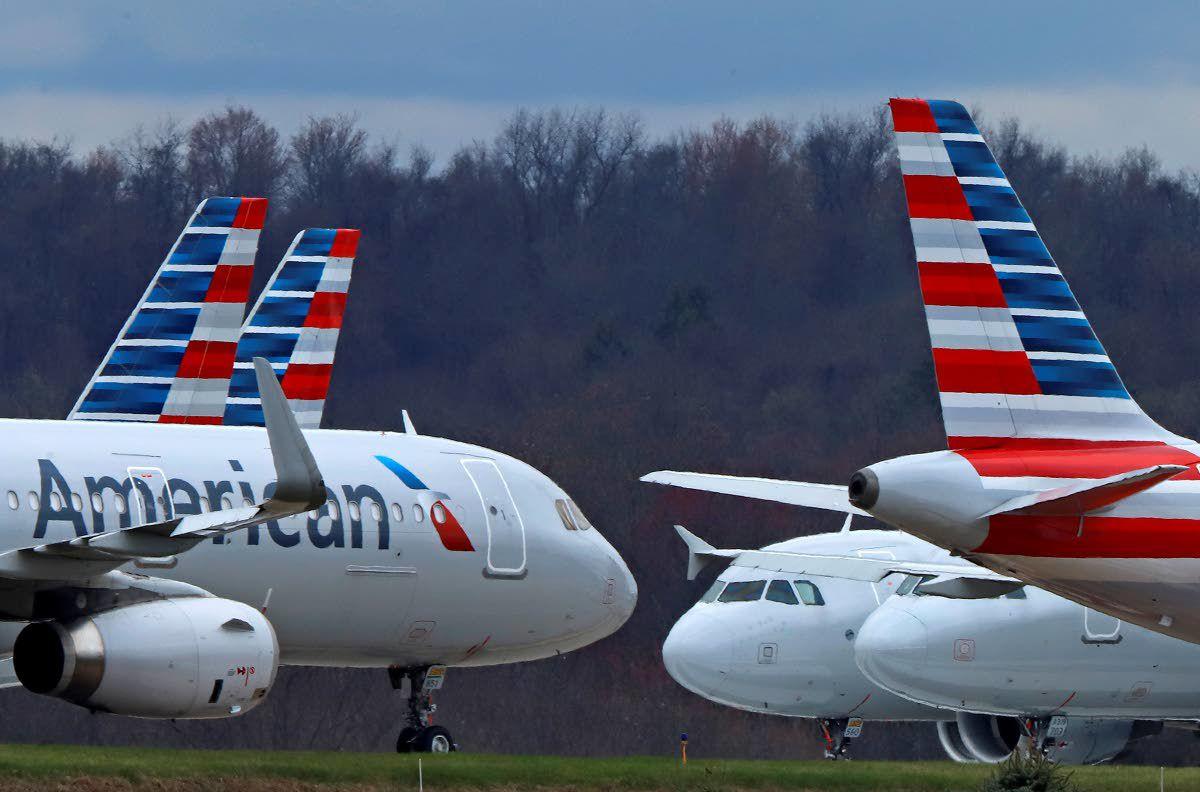 FILE - In this March 31, 2020 file photo American Airlines planes are parked at Pittsburgh International Airport in Imperial, Pa. There will be no more attempt at social distancing on American Airlines flights. The airline said Friday, June 26, that it will start booking flights to full capacity next week. (AP Photo/Gene J. Puskar, file)

Travelers wear mask as they wait at the American Airlines ticket counter in Terminal 3 at O’Hare International Airport Tuesday, June 16, 2020, in Chicago. Beginning June 16 at American Airlines and June 18 at United Airlines, all passengers and crew members will be required to wear masks to prevent the spread of the coronavirus. (AP Photo/Nam Y. Huh)

FILE - In this March 31, 2020 file photo American Airlines planes are parked at Pittsburgh International Airport in Imperial, Pa. There will be no more attempt at social distancing on American Airlines flights. The airline said Friday, June 26, that it will start booking flights to full capacity next week. (AP Photo/Gene J. Puskar, file)

The outbreak of the coronavirus has dealt a shock to the global economy with unprecedented speed. Following are developments Friday related to the national and global response, the work place and the spread of the virus.

American Airlines will start booking flights to full capacity starting next Wednesday. The move contrasts sharply with rivals including Delta that limit bookings to create space between passengers.

American said Friday that it will continue to notify customers of full flights and let them change flights at no cost. The airline said it will also let passengers change seats on the plane if there is room if they stay in the same cabin.

Since April, American has said it limits bookings to leave about half of middle seats open. Delta, Southwest, Alaska and JetBlue say they block middle seats or limit capacity. United Airlines CEO Scott Kirby has said social distancing is impossible on planes — even with empty middle seats, people are less than six feet from each other. Photos and videos of full flights, including ones on American and United, have drawn criticism for their lack of social distancing.

United Airlines will join Delta in resuming flights from the U.S. to China, which were suspended in February. United said Friday it will fly twice a week between San Francisco and Shanghai via Seoul starting July 8. Patrick Quayle, a United vice president, called it “a significant step in rebuilding our international network.” Delta resumed Seattle-Shanghai service this week and plans to restart Detroit-Shanghai next month.

The pandemic is wrecking airlines’ on-time ratings. The Transportation Department said Friday that only 55.7 percent of flights on the 10 top U.S. airlines in April arrived within 15 minutes of schedule, the government’s definition of on time. That’s the lowest mark since the department started keeping track in 1987. Airlines canceled 41.3 percent of scheduled domestic flights, also a record. A year ago, the cancellation rate was 2.4 percent

Boyd Gaming is planning to reopen its properties in Pennsylvania and Illinois. The casino operator said Friday that Valley Forge Casino Hotel in King of Prussia, Pennsylvania are reopening. Par-A-Dice Hotel Casino in East Peoria, Ill., will reopen Wednesday. The two casinos are the last of Boyd’s 29 properties to reopen.

Big Lots is seeing the continuation of strong demand that started in mid-April, with second quarter-to-date comparable sales through fiscal June increasing well ahead of expectations.

The discount retailer now anticipates second-quarter comparable sales will be up by a mid-to-high twenties percentage. Big Lots said Friday that it is in a very strong liquidity position, with current cash and short-term investments of approximately $890 million, and no amounts drawn on its $700 million revolving credit facility.

Shopping mall owner Intu Properties is scrambling to avoid bankruptcy after failing to strike a deal with its creditors. The London-based company is being hammered by lower rent payments from retail clients during the pandemic.

The group, which owns the Trafford Centre in England, has been trying to secure a “standstill’’ on loans and must reach a deal by midnight Friday. Intu has struggled with a 4.5 billion pound ($5.6 billion) debt burden this year.

The company said in a statement that its board is “considering the position of Intu with a view to protecting the interests of its stakeholders. This is likely to involve the appointment of administrators.’’

A German meat company plans to perform daily coronavirus tests on all 5,000 workers involved in the production process amid concerns about a series of outbreaks at slaughterhouses in the country.

Westfleisch, one of Germany’s biggest meat processing companies, said Friday that it is already conducting weekly tests on workers, but starting next week it wants to perform them daily. Westfleisch suffered a COVID-19 outbreak involving hundreds of workers at its plant in Coesfeld in May, but that has since passed.

Rival firm Toennies Group is at the center of an outbreak in the nearby region of Guetersloh that has led to a partial lockdown.

The World Bank says it will prove $374 million in cash support to 270,000 poor families in Jordan, including many who lost income due to the virus outbreak and lockdown.

The bank announced the aid on Friday, saying it was co-financed by the U.K.’s international development agency.

The lockdown came at an enormous cost. The country’s vital tourism industry has been at a standstill since March, and many businesses that were forced to close three months ago have only been allowed to reopen in the last few weeks.

Financial companies led a sharp slide for stocks on Wall Street Friday after the Federal Reserve ordered many of the nation’s biggest banks to suspend buybacks of their stock and cap dividend payments for several months.

The selling this week follows a surge in the number of confirmed new coronavirus cases, a trend that has undercut the optimism for an economic turnaround that helped drive a rebound for stocks for most of the past three months. Investors are now worried that the reopening of businesses that had been shut down due to the outbreak could be set back by the rise in cases, dimming the hopes for a relatively quick economic recovery.