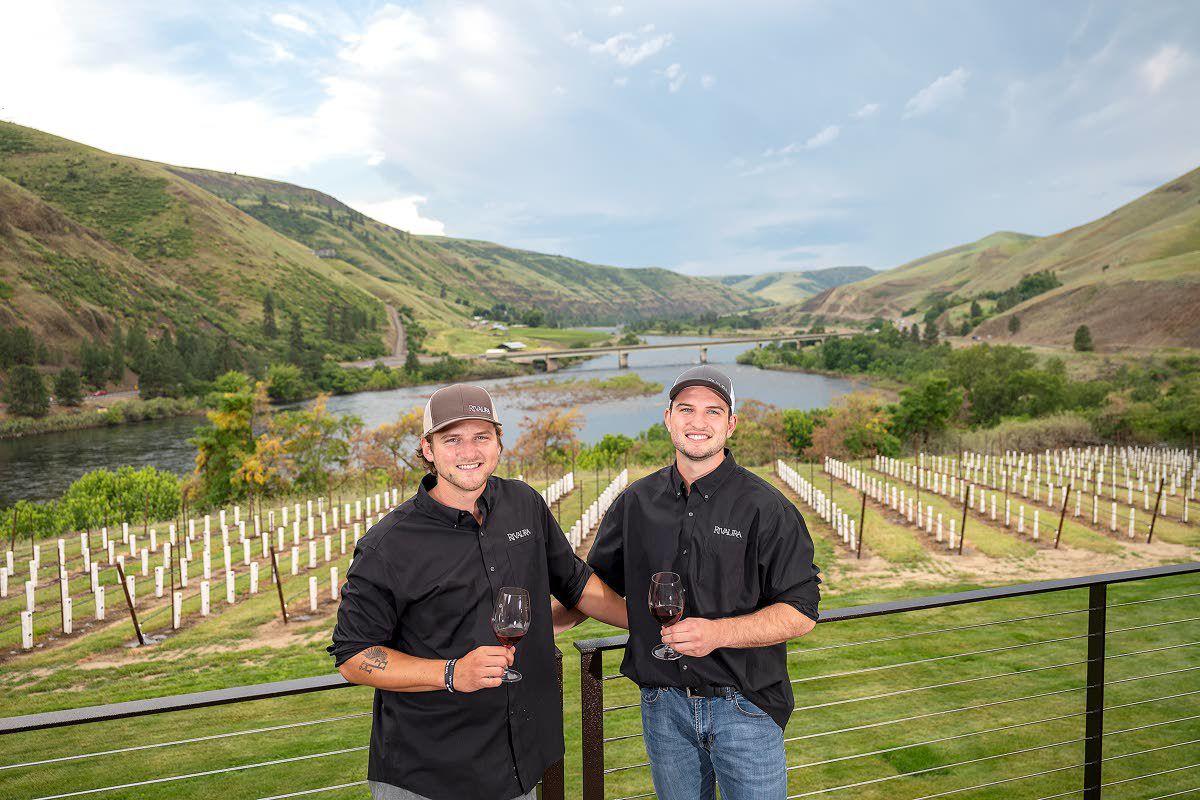 With the Clearwater River in the background, Lane Hewett (right), 23, and his cousin, Vince Hewett, stand in front of a section of the vineyard at Rivaura Estate Vineyards & Winery at Arrow. The Hewetts are assistant wine makers at the winery. 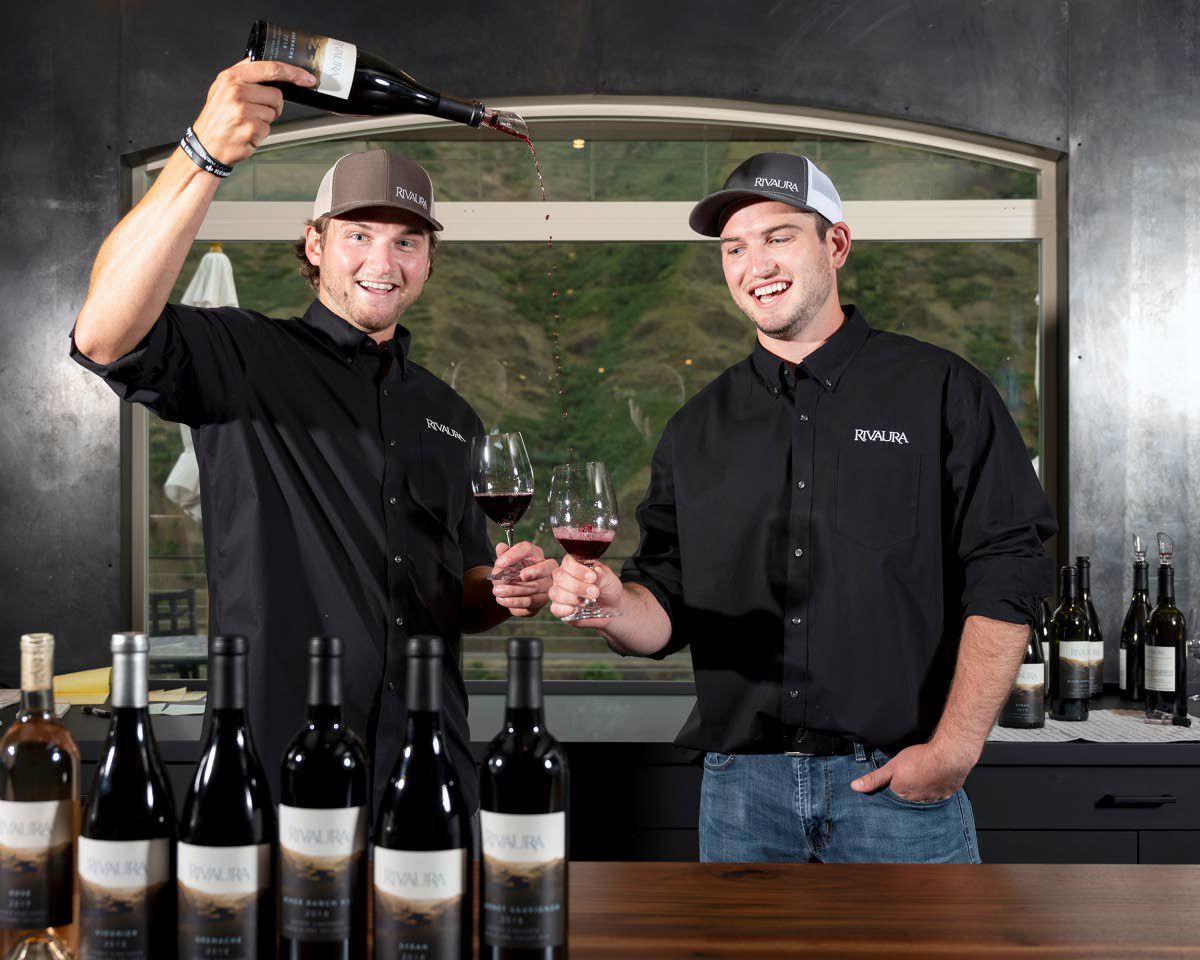 With the Clearwater River in the background, Lane Hewett (right), 23, and his cousin, Vince Hewett, stand in front of a section of the vineyard at Rivaura Estate Vineyards & Winery at Arrow. The Hewetts are assistant wine makers at the winery.

ARROW — For generations, members of the Hewett ranching family viewed 26 acres along the confluence of the Potlatch and Clearwater rivers like the rest of their holdings.

The scenic canyon was a place to raise alfalfa and run cattle. But as the Lewiston-Clarkston Valley and the surrounding area began to develop as a wine region, their perspective shifted. That prompted Ron Hewett Sr., and his sons, Ron Hewett Jr. and Reece Hewett, to establish Rivaura Estate Vineyards & Winery.

The business recently opened a tasting room on the steep, sun-soaked land where part of their vineyard is, culminating more than a half-decade of careful study and planning.

The winery joins 10 others within the boundaries of the Lewis-Clark Valley American Viticultural Area, which was established in 2016. The designation recognizes that wines produced with grapes from the region have unique, desirable characteristics.

“We took the long-term approach to try and maintain quality,” said Reece Hewett, an owner. “Most people probably couldn’t or wouldn’t. It took a lot of patience.”

“Everything we do is 100 percent estate,” said Lane Hewett, an assistant winemaker and Reece Hewett’s son.

The Hewetts did lots of research before reaching this milestone. Lane Hewett, and his cousin, Vince Hewett, the other assistant winemaker and son of Ron Hewett Jr., studied grape growing and winemaking.

Vince completed a bachelor’s degree in the same subjects from Washington State University.

Members of the family spent more than a week in the Napa Valley, getting behind-the-scenes tours of grape-growing operations, deciding among other things, to use metal trellises instead of wood. It’s a higher upfront cost, but steel lasts longer.

A consultant evaluated soil samples from hundreds of test holes. That information, along with data about sunlight exposure and temperatures, guided decisions about where to plant grape varieties.

Even though their site isn’t large, conditions vary, partly because of differences in elevation.

They chose to prune the grapes to grow fewer clusters on each vine, an approach they believe intensifies the flavors of the grapes.

“We try to make the best fruit, because that’s where it starts,” Reece Hewett said.

During harvest, they pick the grapes at 3 a.m. The early hour allows the grapes to stay cool as they are hauled to Artifex, a custom crush facility in Walla Walla, where they are processed following the instructions of Yashodhan Naravane, their consulting winemaker. Naravane is the lead winemaker at Rasa Vineyards in Walla Walla.

The combination of the flavors their growing conditions impart to their grapes, along with Naravane’s experience, is a combination they hope will go over well with the public.

There have been encouraging signs from critics. Their 2018 Grenache ($38) won best of class in a Savor NW Wine competition.

The Hewetts said they believe what they offer will help build the growing industry. Their tasting room, they note, is between Clearwater Canyon Cellars in Lewiston and Colter’s Creek Vineyards & Winery in Juliaetta and Moscow.

Rivaura, the Hewetts expect, will complement what those and other wineries have accomplished, and help turn the area into a new destination for wine lovers.

“A lot went into what we’re doing,” Reece Hewett said.

The winery sells a limited selection of food to go with its wine, such as cheese and cold meats.