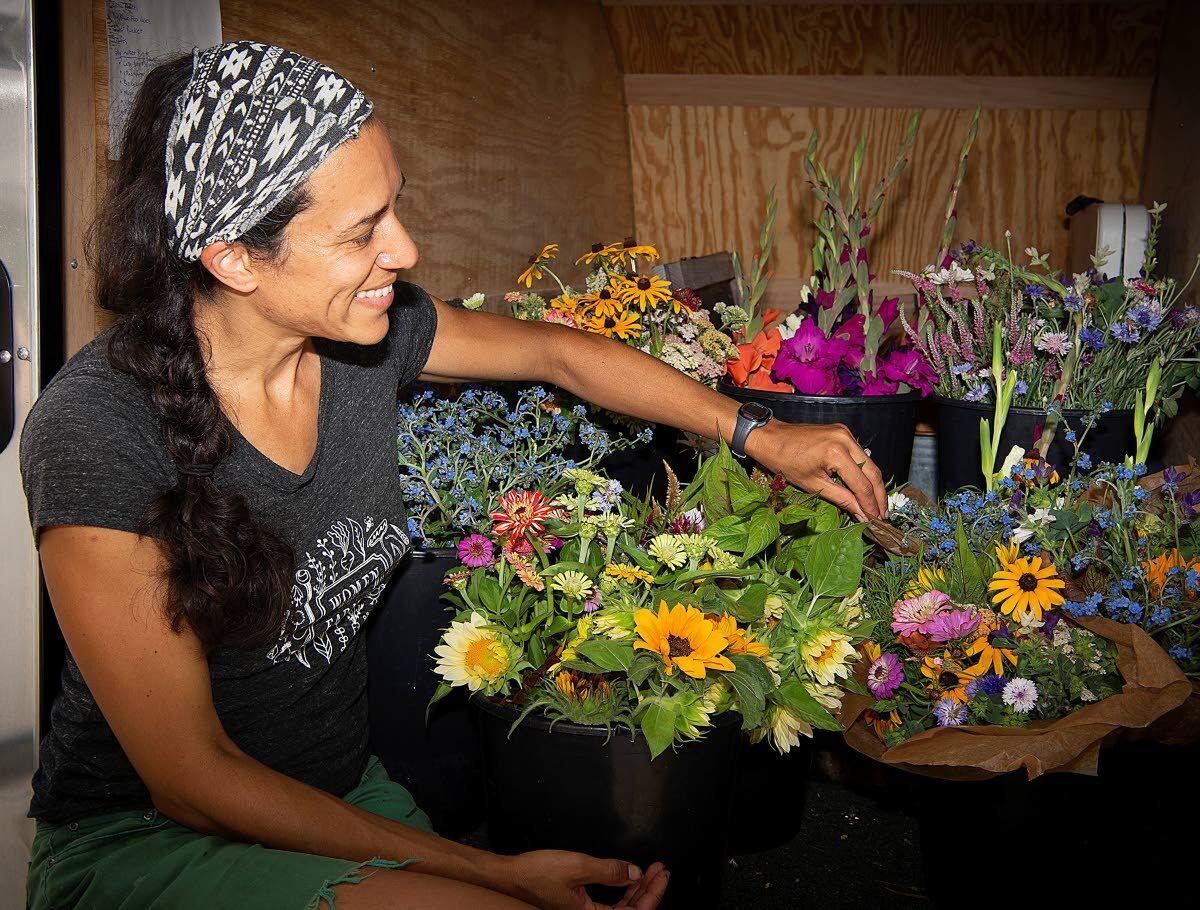 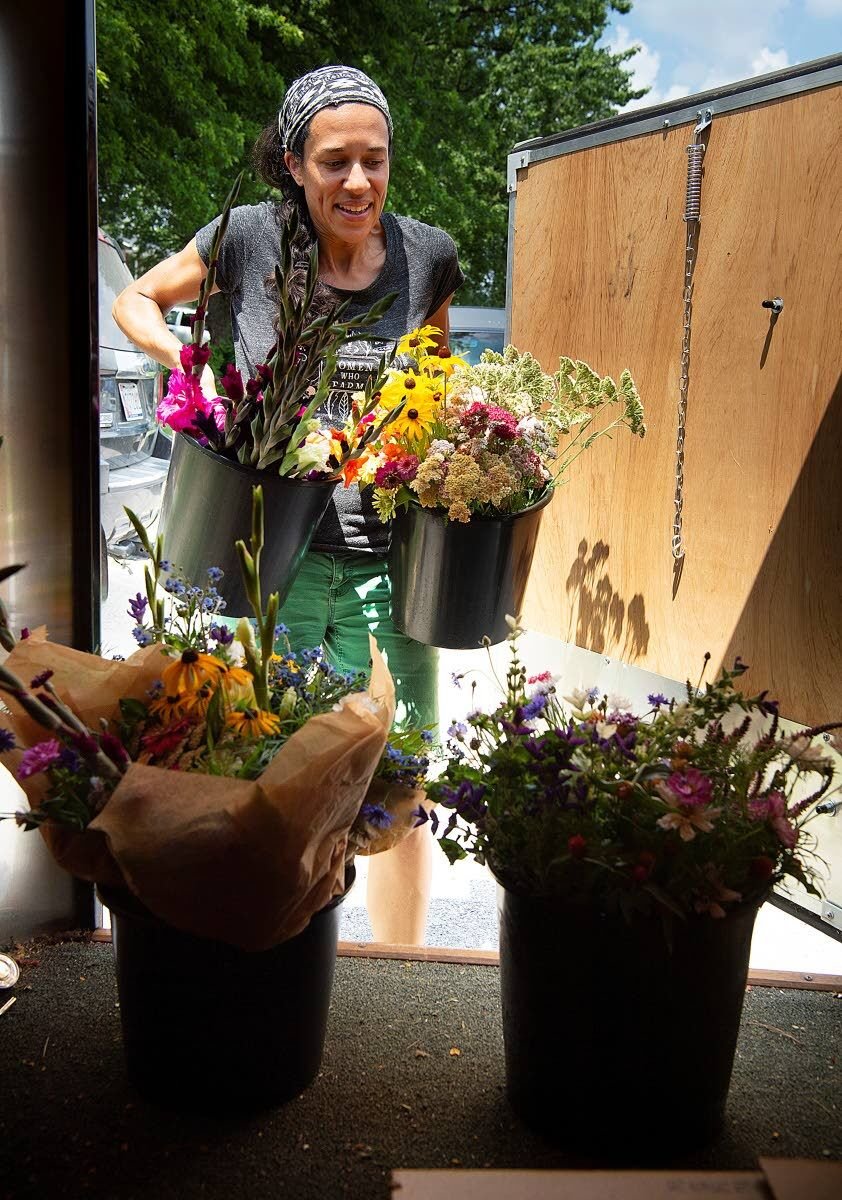 Bowens Blair loads buckets of fresh cut flowers into her trailer, July 19 in Frederick, Md. Bowens Blair is co-owner of Native Mountain Farm, which they describe as a “women-owned, Black empowered” business located in Boonsboro, that serves customers in Frederick County.

Bowens Blair loads buckets of fresh cut flowers into her trailer, July 19 in Frederick, Md. Bowens Blair is co-owner of Native Mountain Farm, which they describe as a “women-owned, Black empowered” business located in Boonsboro, that serves customers in Frederick County.

“Pretty much as soon as I stuck my hands into the dirt, and decided I was in love with growing and learning more about plants and the land, there was no way that I could do that without seeing the kind of intersection of race and injustice in our country,” she said.

Bowens Blair is co-owner of Native Mountain Farm, which they describe as a “women-owned, Black empowered” business located in Boonsboro, that serves customers in Frederick County. Co-owner Julie Blair, who is also her mother-in-law, has owned and lived on the land for 38 years.

“I’ve been growing off and on for the past 10 years or more and mainly grew food my whole career working for other farms and such,” Bowens Blair said, adding that she’s been vocal about being a Black farmer and pointing at her book “The Color of Food,” which was published in 2015.

In Frederick County, there are only 14 Black or African-American agricultural producers, according to the U.S. Department of Agriculture 2017 Census of Agriculture, the most recent data available. This is in comparison to 2,364 white producers in the county. That means Black people, who make up 18 percent of the population in Frederick County, make up 0.5 percent of the agricultural producers in the county.

And in the country, there are 48,697 producers who identified as Black, either alone or in combination with another race, according to the 2017 Census of Agriculture. They accounted for 1.4 percent of the country’s 3.4 million producers, and they lived and farmed primarily in southeastern and mid-Atlantic states.

Yet, in 1920, there were almost a million Black farmers in the country, though not all of them were owners, according to USDA.

The reasons for the lack of Black farmers and producers, despite a history of land stewardship that dates back centuries, are plentiful. And Bowens Blair said they include Black people and farmers being pushed out of the South and killed during Jim Crow, legal loopholes that made it possible for land to be taken from Black farmers and discrimination in laws that make it more difficult to pass down land.

A 2005 NPR article reported that, as recently as 1997, the Agriculture Department determined that in the southeastern U.S., loan applications from Black farmers took three times as long to be processed as for white farmers.

And as recently as June 15, Forbes reported that Washington, D.C.’s largest farmers market has repeatedly denied Black farmers and food makers a spot at their most profitable market in Dupont Circle.

Native Mountain Farm is a business that offers flowers, medicinal herbs and flowers, and fruit.

“We’re a small, small family farm,” Bowens Blair said. “We grow on about a quarter acre on my mother-in-law’s land.”

Bowens Blair attended the SOUL Street Market Pop Up in Frederick on July 4 and is also on the steering committee. The event featured Black-owned businesses and creators.

“I was blown away by the community support and coming out and standing in line on one of the hottest days … just waiting for my flowers and waiting to come inside and support all the other vendors as well,” she said, adding that the pop-up market was just the beginning and that the next event will be Aug. 15 at a larger venue.

“It was front and center as soon as I started apprenticing on farms and I felt like I was, you know, the only brown girl out in the country or I’d be at farmers markets and just kind of felt like the place wasn’t for me,” she said.

That feeling was reflected in the experiences of both farmers and customers.

“When I was working on urban farms and, you know, living and accessing farmers markets in cities like D.C. and New York and I was in communities of color and could see the inequities and see kind of the barriers at the door for not only farmers but customers of color,” Bowens Blair said.

She continues to farm to build self-sufficiency and “to continue to show and tell the world that we are out here, we do belong here on land growing food. We do have right to healthy food and plant medicine and we’re going to continue to provide ourselves with that no matter what.”

There are many organizations combatting and educating people about inequality in farming. These include Soul Fire Farm and The Black Church Food Security Network.

Soul Fire Farm in New York is located on 80 acres and is “committed to ending racism and injustice in our food system,” according to its website.

While their on-farm programs and in-person speaking events are canceled because of COVID-19, the farm would typically offer several programs and experiences including those that help teach “basic skills in regenerative farming” and training in building and construction. They also offer online learning and a youth program.

The Black Church Food Security Network “(builds) pipelines for fresh produce between Black Farmers and Black Churches in African American communities across America,” according to its Facebook page.

This includes “(working) with congregations to establish gardens and agricultural projects on Black Church-owned land,” and “(linking) farmers with congregations for niche farmers markets which happen inside places of worship,” according to their website.

FARMING IN A PANDEMIC

Bowens Blair said when COVID-19 hit, Native Mountain Farm was forced to reinvent itself. And at first, she wanted to “lay low and get the farm through it,” but people kept asking for flowers.

“It was really kind of cool to see that people were out here needing this joy, needing the therapy, needing something to brighten their day … and we wanted to be able to provide that,” she said, adding that they’ve slowly been growing the plant medicine portion of the farm.

With COVID-19 and social unrest related to George Floyd’s killing, Bowens Blair said it became clear that people are traumatized, stressed and struggling to sleep, but she had access to plants like lavender that could help.

“I really wanted to be able to provide that, particularly for folks that are on the front line, which is primarily, you know, the Black community, Black and brown community, both with COVID and out there hitting the streets and protesting,” she said.

Bowens Blair said it’s been great to see things like the Frederick Minority Owned Businesses Group on Facebook and people “putting their money where their mouth is” by being vocally anti-racist and seeking out Black-owned businesses.

She said the government offering assistance and subsidies is a great first step.

“I see a lot of that stuff as Band-aid solutions,” she said. “We can do little things here and there but overall we all know we have to completely tear down the system and rebuild it for it to actually work.”

As for what she wishes people knew about being a Black farmer in the community, she said she just wants people to know that “we’re here.”

“Not only is there a Black woman herbalist and farmer doing this now but she’s always been here, for centuries,” she said. “Our ancestors have been on land and stewarding land and growing healthy food and preserving herbs and using plant medicine since the beginning of time.”

And for the Black community, Bowens Blair said it’s important to remember that this isn’t just a trend.

“This is for us,” she said. “This is our history. This is a part of our legacy and we have to keep on going and we have to remember that we have this wisdom within us.”