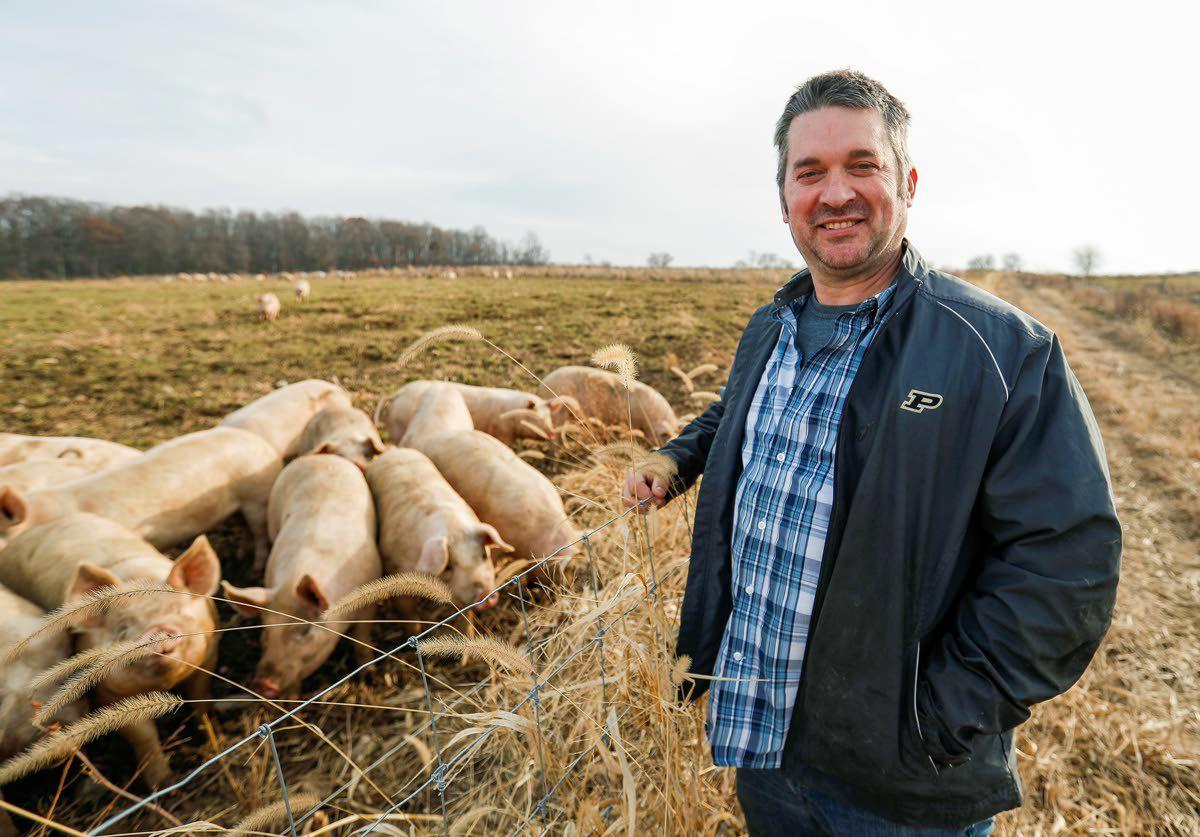 In this photo taken Dec. 3, Gunthorp Farms owner Greg Gunthorp poses for a photo in LaGrange, Ind. Gunthorp said the use of managed grazing on his property helps sequester carbon by building organic matter in the soil. 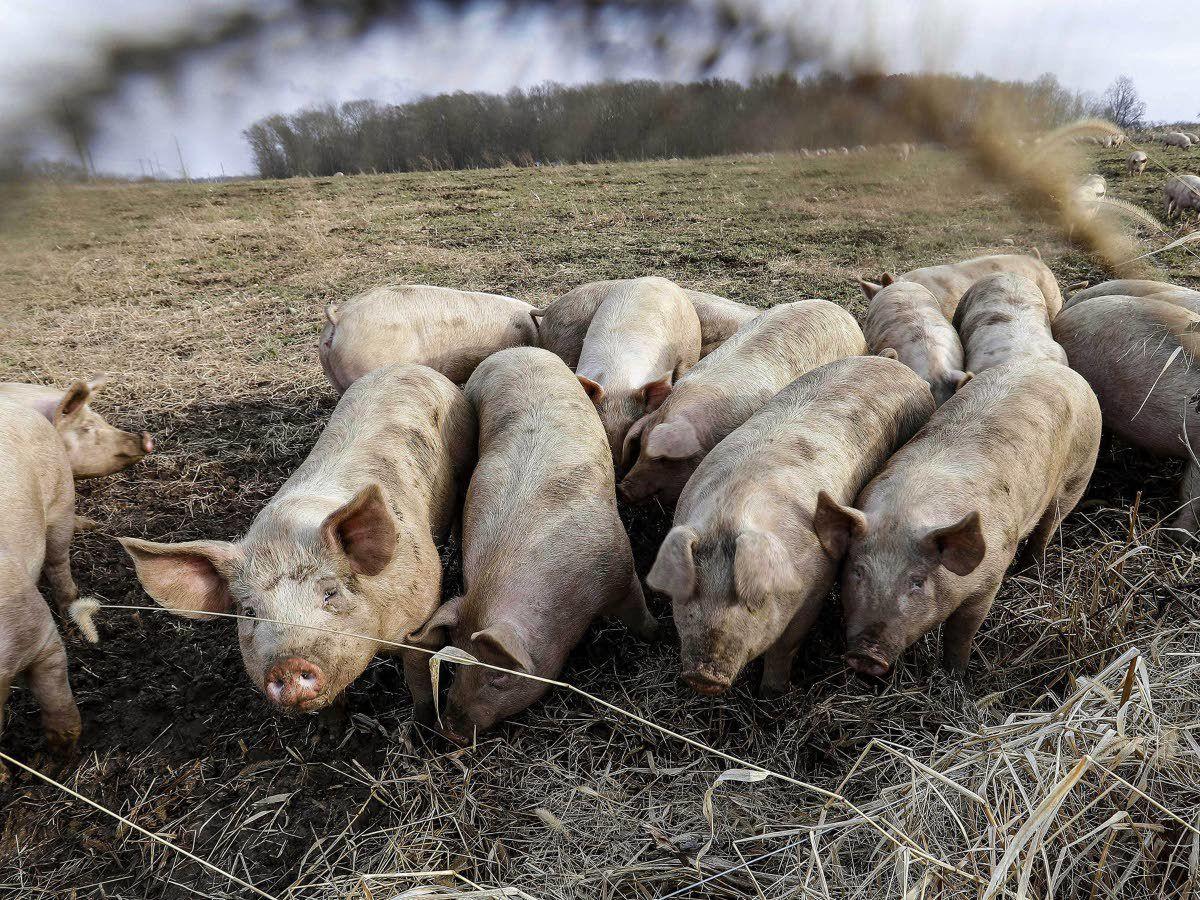 Pigs stand at the fence line at Gunthorp Farms, in LaGrange County, Ind., on Dec. 3. Owner Greg Gunthorp said the use of managed grazing on his property helps sequester carbon by building organic matter in the soil.

In this photo taken Dec. 3, Gunthorp Farms owner Greg Gunthorp poses for a photo in LaGrange, Ind. Gunthorp said the use of managed grazing on his property helps sequester carbon by building organic matter in the soil.

Pigs stand at the fence line at Gunthorp Farms, in LaGrange County, Ind., on Dec. 3. Owner Greg Gunthorp said the use of managed grazing on his property helps sequester carbon by building organic matter in the soil.

LaGRANGE, Ind. — Farmland is expanding across Indiana, worldwide food demand is increasing and Americans are eating more meat than ever before — still, Greg Gunthorp says, farming is dying.

By that, the LaGrange farmer means the small, independent farmer is increasingly losing out to big-brand agribusiness.

“The agriculture markets have been very clear for decades to get big or get out,” Gunthorp said. “We’ve lost 90 percent of the hog farmers in the last generation. ... Conventional agriculture is extremely productive and extremely efficient, but in lots of ways I think it hit the bull’s eye on the wrong target.”

But regenerative farming, a style of farming that abandons the plow for natural practices that promote soil health, is growing in the Hoosier state, and some think it could be part of the solution.

Regenerative farming encompasses a variety of practices, including cover cropping, not tilling the fields, and managed grazing of livestock.

These practices have been shown to boost soil health, prevent erosion and sequester carbon in the soil. At some locations, studies have even shown regenerative farms absorbing more carbon from the atmosphere than they emit.

The concept of regenerative farming isn’t new, but it is growing in popularity. Presidential candidate Bernie Sanders and former candidate Kamala Harris have promoted it in their sustainability plans, and environmentalists laud it as a practice that can reduce chemical runoff and improve carbon emissions.

And, unsurprisingly as a top agricultural state, Indiana has joined the race.

The number of acres used for cover-cropping, a major regenerative farming practice, have more than quadrupled in the Hoosier state since 2011. No-till practices have been steadily growing since the 1990s.

Regenerative farming might be environmentally healthy, but it could mean big benefits for the financial health of a farm as well — which is why some believe it may help save the small, independent farmer.

For fourth-generation hog farmer Gunthorp, it was a direct impact.

Gunthorp said he should barely be able to support his family on his 270-acre farm, according to some experts. But at his farm, he’s able to employ 30 workers full time and produce about 1 million pounds of pastured pork and poultry each year.

“Regenerative agriculture and sustainable agriculture, I think, gives people the opportunity … to do something different without having to get huge,”he said.

The simplest way to explain regenerative agriculture, Gunthorp said, might be as a step beyond sustainable agriculture.

“I think the handful of farmers have come to the realization that just to sustain rural America is not good enough, that we actually have to regenerate it,” Gunthorp said. “Regenerative agriculture relies on farmers’ ability to create a system with the ability to cooperate with nature.”

Mostly, this means promoting soil health, said Lisa Holscher, director of Indiana’s Conservation Cropping Systems Initiative. This can be done a multitude of ways, all oriented toward keeping nutrients in the soil and keeping disturbances out.

Not tilling helps, as does planting cover crops, which are planted during the off season and not sold.

Cover crops keep a growing root in the ground year-round, promoting natural organisms and working against erosion. No-till farming keeps those organisms together, where tilling would disturb the soil and break them up.

As a livestock farmer, Gunthorp also integrates managed grazing. By allowing his pigs to graze on the grass in his pastures, he said, the roots die back and regrow, which sequesters carbon and builds organic matter.

For every 1 percent of organic matter produced, he said, the soil’s water-holding capacity goes up about one inch per acre.

During droughts, that means the soil keeps its moisture. During floods — as seen in the Midwest this spring — it can protect farmers from heavy erosion that causes production losses.

“If we see (regenerative) practices across regions, across watersheds, we can see improvement in water quality from less runoff,” O’Donnell said. “That could potentially reduce flooding impacts.”

Farmers describe a variety of motivations for switching to regenerative farming. Some want to save the land for future generations. Some are motivated by religion, and want to be good stewards of the Earth. And, for some, it’s purely economical.

Whatever the reason, no-till acres have almost quadruped in popularity since the 1990s, and use of cover crops has similarly boomed in the last decade.

Since 2011, the number of acres used for cover cropping in the state has grown by 438 percent. A major drought beginning in 2012 may have accelerated the rise, Holscher said.

“Indiana is home to leaders of this regenerative agriculture movement,” Holscher said.

One of these leaders is Williamsport farmer Rick Clark, who was recently named 2019’s Farmer of the Year by Field to Market: The Alliance for Sustainable Agriculture.

Clark remembers a time more than 15 years ago when he just finished tilling a field to prepare it for corn planting. Then, it rained.

“We got a 1-inch rain event, and I couldn’t believe how much erosion had occurred,” said Clark, a fifth-generation farmer. “That’s when I said enough is enough, it’s time for a change.”

Clark started by no-till farming his soybean and corn crops, but eventually built up to farming “green” — meaning no chemicals or fertilizers whatsoever.

“We are about as naked and low-cost as you can possibly get,” said Clark, who now travels around the world to speak on regenerative and organic farming practices.

Gunthorp recalls his neighbors’ impressions when his family began incorporating more regenerative practices about two decades ago: “We were the granola-crunching hippie farmers.”

Now, quite a few farmers in the area employ the practices, he said, including Seven Sons Farms, and seasonal grass dairies that sell through Horizon Organic and Organic Valley.

“The soil health, regenerative farming movement is picking up steam and is probably the fastest moving conservationist movement in the country,” said farmer Ray McCormick, who farms 2,400 acres in southwest Indiana and southeast Illinois.

Joining the trend in the 1980s, McCormick was also part of the early wave of regenerative farming adopters. For decades since, he’s promoted the practice.

“I do it for lots of reasons, and the No. 1 reason is to save the planet. Without healthy soil we can’t grow our food,” McCormick said. “Farmers have a chance to make a dramatic impact in a hurry.”

The return on investment varies depending on the farm, but there are definite financial benefits to cover cropping, said Jordan Seger, deputy director for the Indiana State Department of Agriculture.

“I think you see a mix of returns and economic reasons why farms utilize cover crops,” Seger said. “In some cases, farmers are seeing some yield increases, especially after three or four years.”

Clark said organic and regenerative practices improved his crop yield — which brought in more money —but mostly, he said it saved him money on chemicals and fertilizers.

Gunthorp also found financial prosperity in regenerative practices. And he discovered that many customers are looking to buy from farmers who raise animals the way he does.

“There’s more and more customers all the time that are wanting to know how their food’s raised, how it’s processed and how it’s handled,” Gunthorp said.

None of this means regenerative farming will suddenly make it easy for the small, independent farmer in Indiana, he said. There’s still the challenge of getting it started.

The agricultural system is highly concentrated, Gunthorp said, and isn’t set up to encourage these practices.

“That whole expression, ‘What you support prospers,’ probably applies here,” Gunthorp said. “Because as a nation, we chose to prop up agribusiness.”

But while the trend progresses, big businesses are taking note: In May, General Mills promised 1 million acres of regenerative farmland by 2030. Other foundations such as Farm Aid dole out grants to bolster regenerative practices.

The ISDA also hopes to increase cover cropping acreage in the state to 5 million acres by 2025, Seger said.

“Farmers control a large percentage of the real estate in this state and in this country,” Gunthorp said. “And I think that farmers have to be at the table when we’re talking about climate change.”