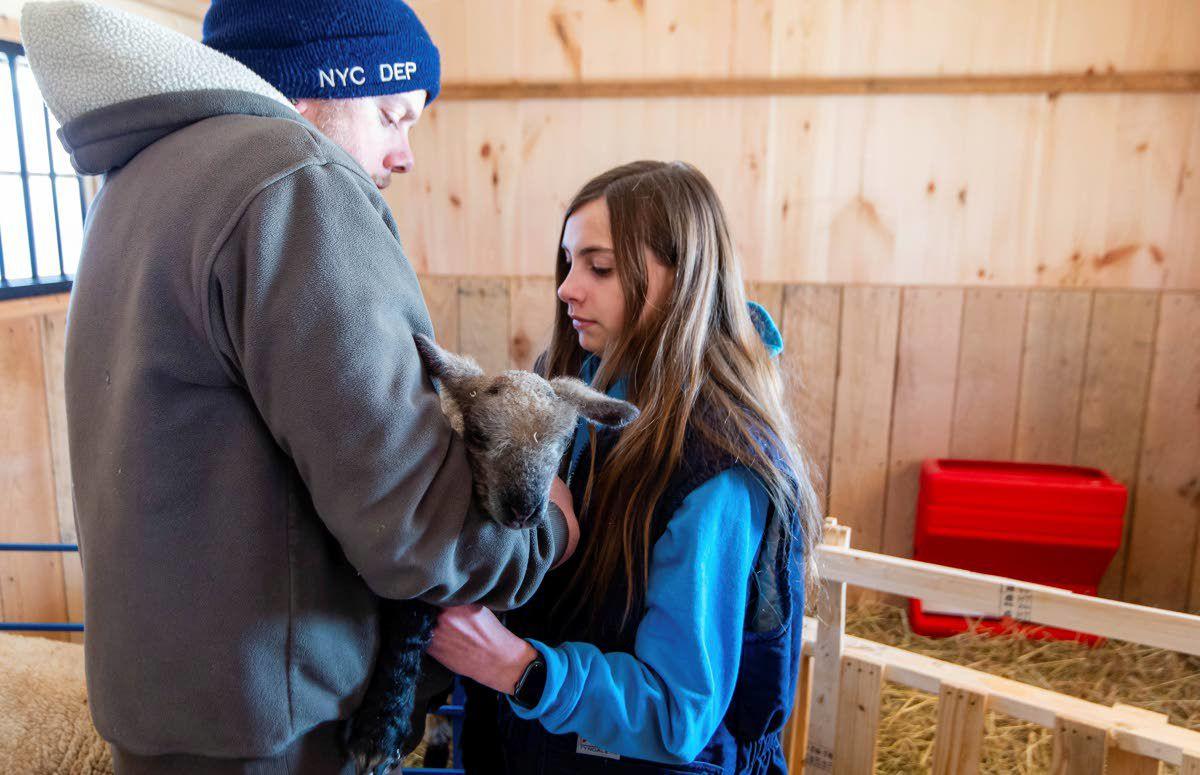 ABOVE: An Agri-Science teacher hands a two-day old lamb to freshman Gianna Campbell, 14, at the Shepaug Regional High School’s Agri-Science department on Wednesday in Washington, Conn. BELOW: Westin, left, nurses her two-day old lamb as Mystique, right, who is expecting any day now, look on 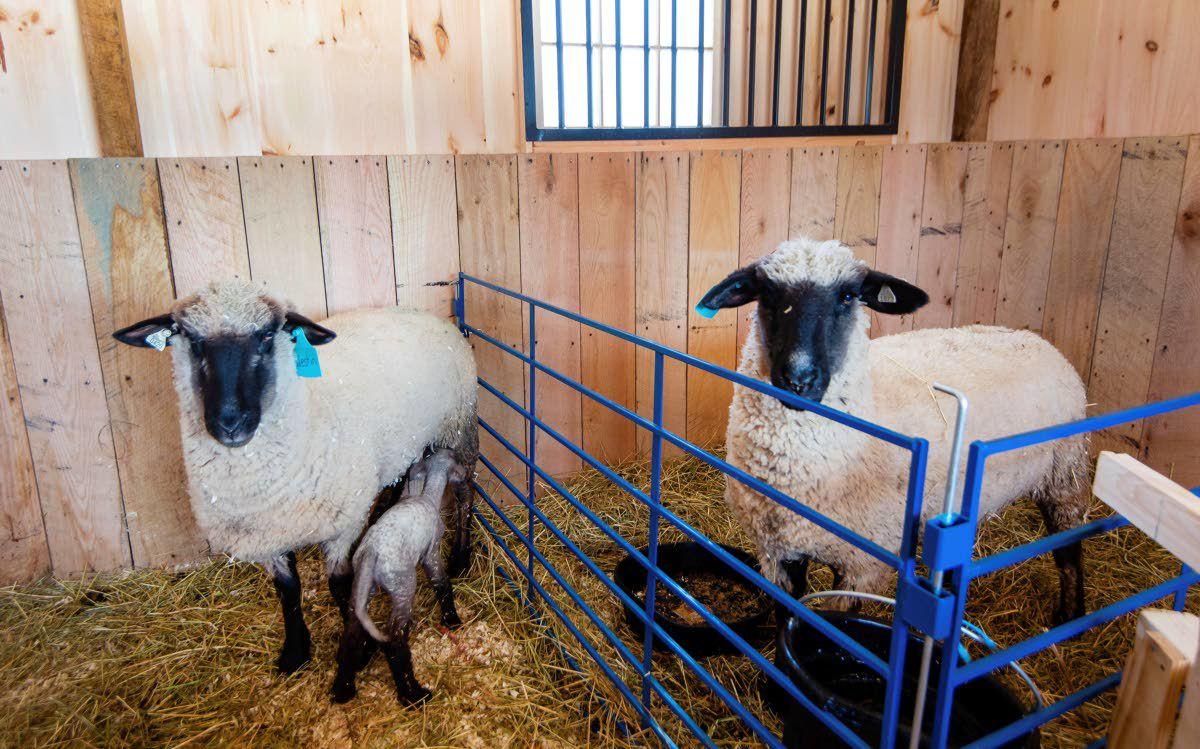 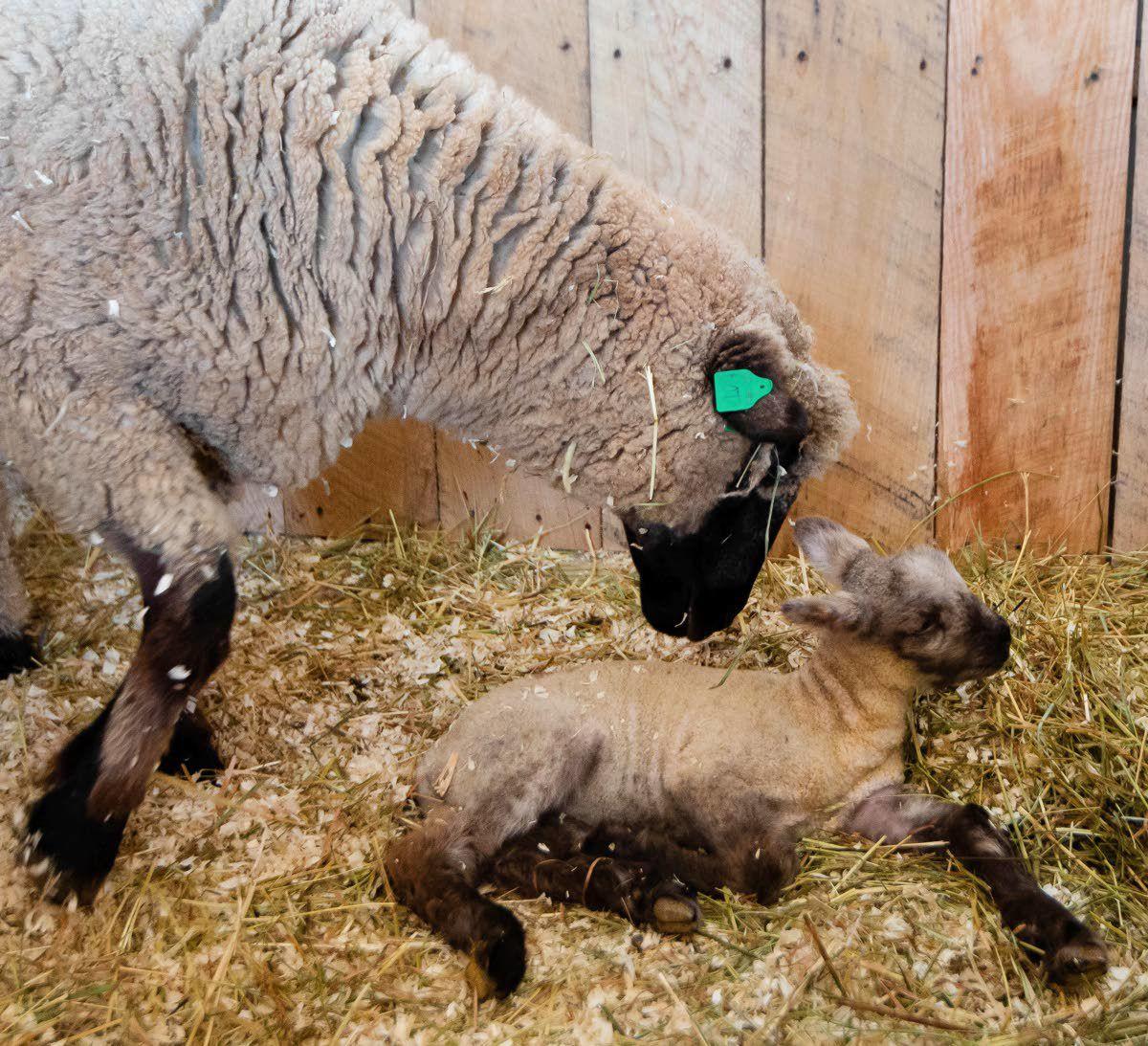 Dotty tends to her lamb that was born recently at the Shepaug Regional High School's Agri-Science department on Wednesday, Jan. 12, 2020, in Washington, Conn. 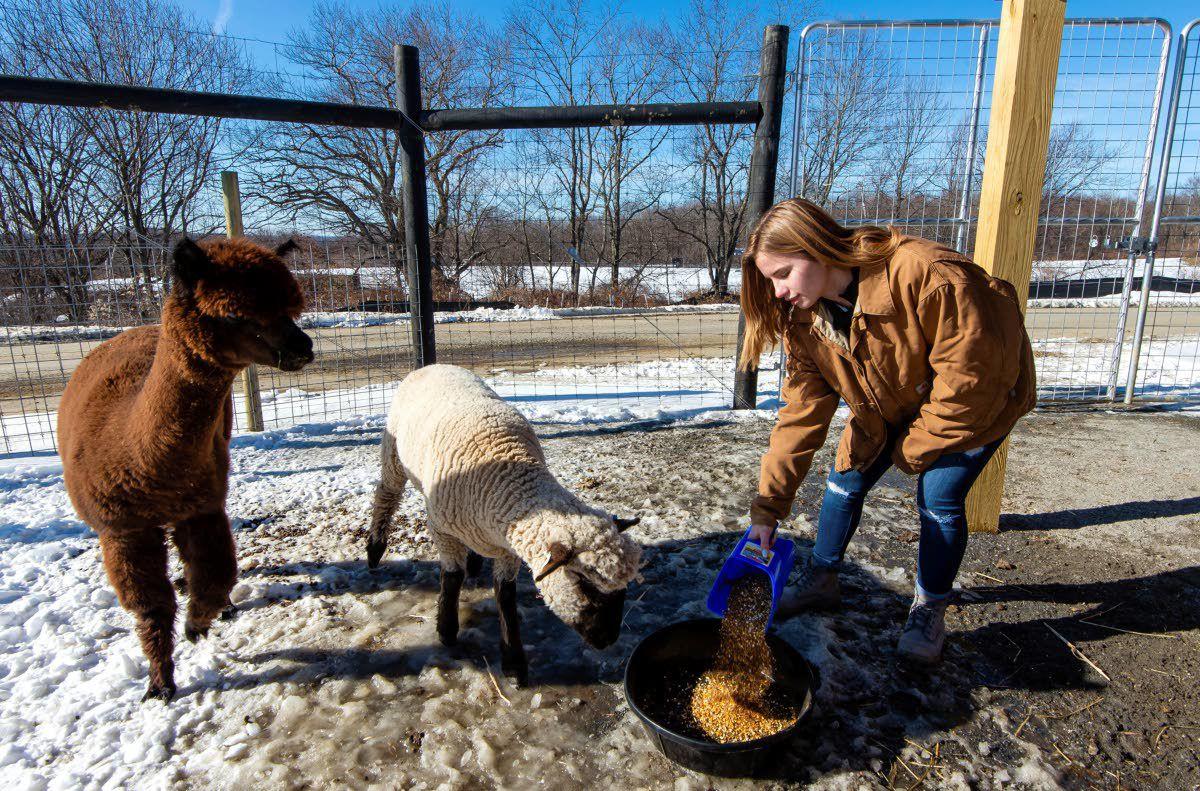 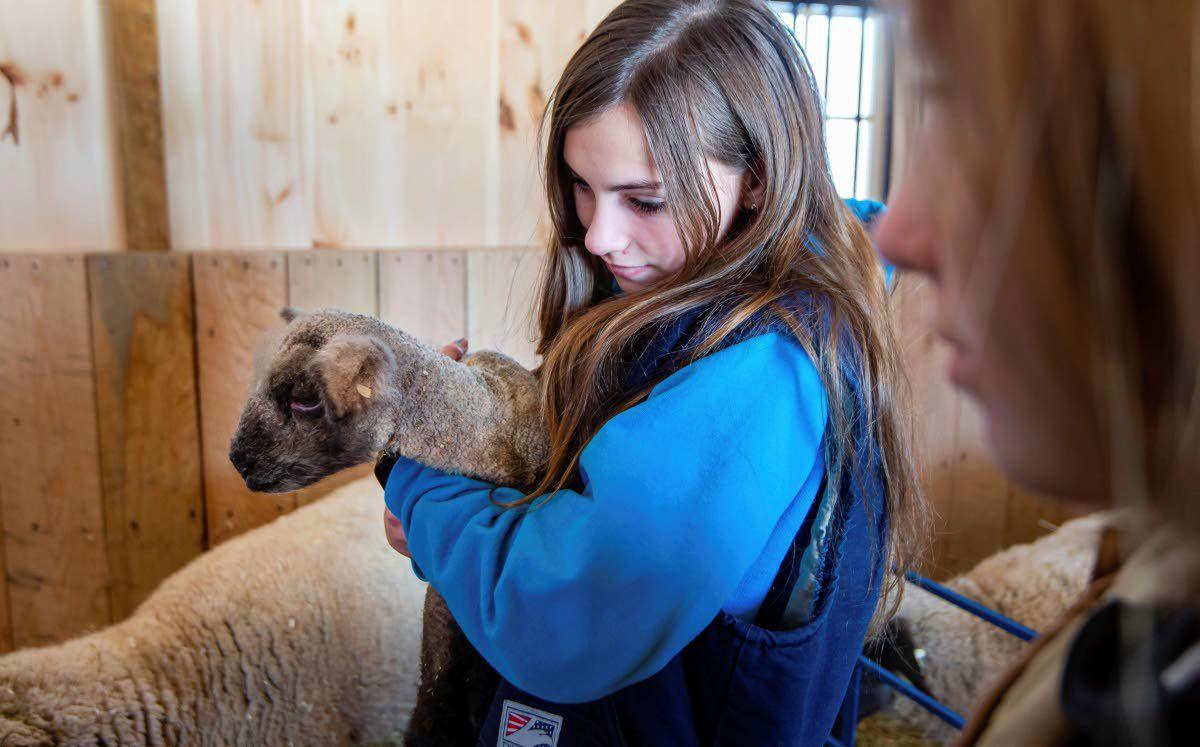 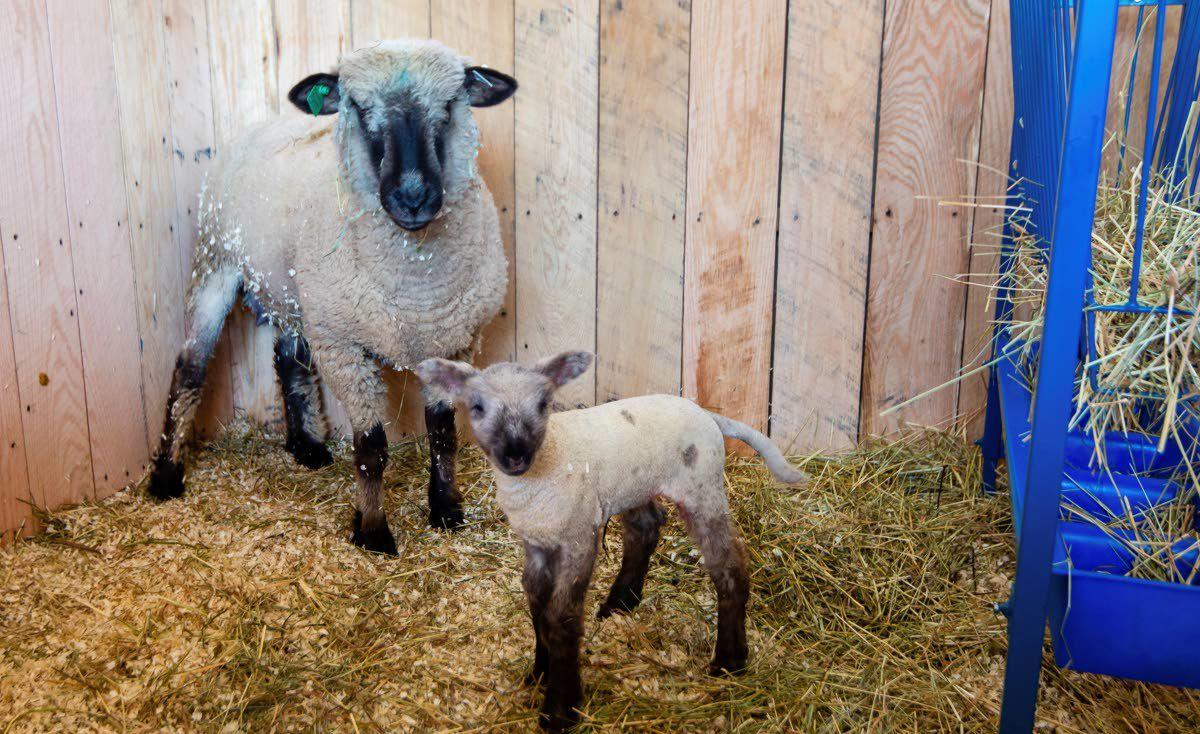 ABOVE: An Agri-Science teacher hands a two-day old lamb to freshman Gianna Campbell, 14, at the Shepaug Regional High School’s Agri-Science department on Wednesday in Washington, Conn. BELOW: Westin, left, nurses her two-day old lamb as Mystique, right, who is expecting any day now, look on

Dotty tends to her lamb that was born recently at the Shepaug Regional High School's Agri-Science department on Wednesday, Jan. 12, 2020, in Washington, Conn.

WASHINGTON, Conn. — Bundled up in her winter jacket, Elaina Stumpf headed outside on a recent brisk, sunny day at Shepaug Valley School.

The sophomore from Bridgewater had an important task. She needed to help feed her new friends, 2-week-old lambs birthed by sheep that are part of Shepaug’s Agriscience STEM Academy, which is also in its birth year.

“It’s really cool. You get to be closer to them and pet them while you’re feeding them,” Stumpf said of the newborn lambs. “They get comfortable with you.”

Since its launch in September, the academy has been combating Shepaug’s declining enrollment by offering students within and outside the Region 12 school district experiential learning opportunities focused on animal, food, plant and power sciences.

Seventeen are from the Region 12 towns of Washington, Roxbury and Bridgewater, and 29 are from outside the rural district: New Milford sends eight, Danbury seven, Sherman five, Newtown four, Brookfield three, New Fairfield one and one from an unspecified town.

“I was excited when they came to my (middle) school and told us there was going to be an ag program with animals,” said Reagan Rivera, a freshman from New Milford. “I thought it’d be cool to come here.”

The academy has become a breeding ground of new life in the past couple of weeks, bringing in alpacas, bearded dragons, bunnies, guinea pigs, rats and a turtle to accompany the newborn lambs and their sheep parents.

Stumpf said, “I was excited to try something new. I think normal high school is fun, but when you have a different opportunity, especially something in its first year, you can be a part of something bigger.”

Region 12 Superintendent Megan Bennett said there are a total of 267 high school students at Shepaug this year.

Peter Prowda, a professional demographer, stated in a 2018 report on enrollments for each of the Region 12 schools that Shepaug had 326 students in 2010. That number dropped to 252 in 2016.

Shepaug’s projected enrollment for 2029 is 263, but that figure could be considerably less without the academy, Bennett noted. She said the academy has a target number of 139 students to be fully enrolled.

Agriscience teacher and Shepaug alumna Rachel Murray, who teaches food sciences, agreed the new program is vital to the district.

Out-of-district towns pay $6,823 in annual tuition to send each student to the academy, Bennett said, and the state helps out by paying $4,200 of that amount.

Bennett said some Region 12 community members weren’t fully onboard when the agriscience program was first proposed in 2015 by her predecessor, Patricia Cosentino, whom Bennett replaced entering the 2018-19 school year.

“People were struggling to see how old-fashioned farming was going to meet the demands of the modern-day educational process,” Bennett recalled. “People were questioning the business model.”

Though 69 percent of Region 12 residents eventually approved building the academy in a November 2015 referendum, construction was delayed until November 2018 because the project didn’t get its much-needed 80% state funding until the fall of 2017.

Students are restricted to the program’s exploratory curriculum for now because the academy is in its first year and building from the ground up, said Lori Trovato, coordinator of the agriscience program.

“These students are understanding that they have the ability, through their own learning and the teaching standards that we’re providing them, to be malleable and grow as a whole with us,” she said.

Students rotate through “pathways” to study animal science; food products and processing systems; plant sciences; and power, structural and technical systems once every nine weeks. They will decide the ultimate pathway they want to pursue after this school year is complete, Bennett said.

“I think everything in the ag-program is way more hands-on than the normal sciences,” Stumpf said. “You get to do a lot more even though it’s harder work. It’s a great experience.”

When agriscience students aren’t flying drones around campus to find invasive species or designing self-driving tractors, they are in class with regular Shepaug students taking core curriculum classes for 80 percent of their day, Bennett said.

Peter Lawler, who teaches power, structural and technical systems, said the agriscience department has been collaborating with other Shepaug teachers on ways to incorporate cross-discipline concepts into their curriculum.

“We have a beautiful opportunity up here,” Trovato said. “All these pathways can tie into our natural world and the environmental side. This is something that our school wants to make sure we infuse into our students in some way, shape or form.”