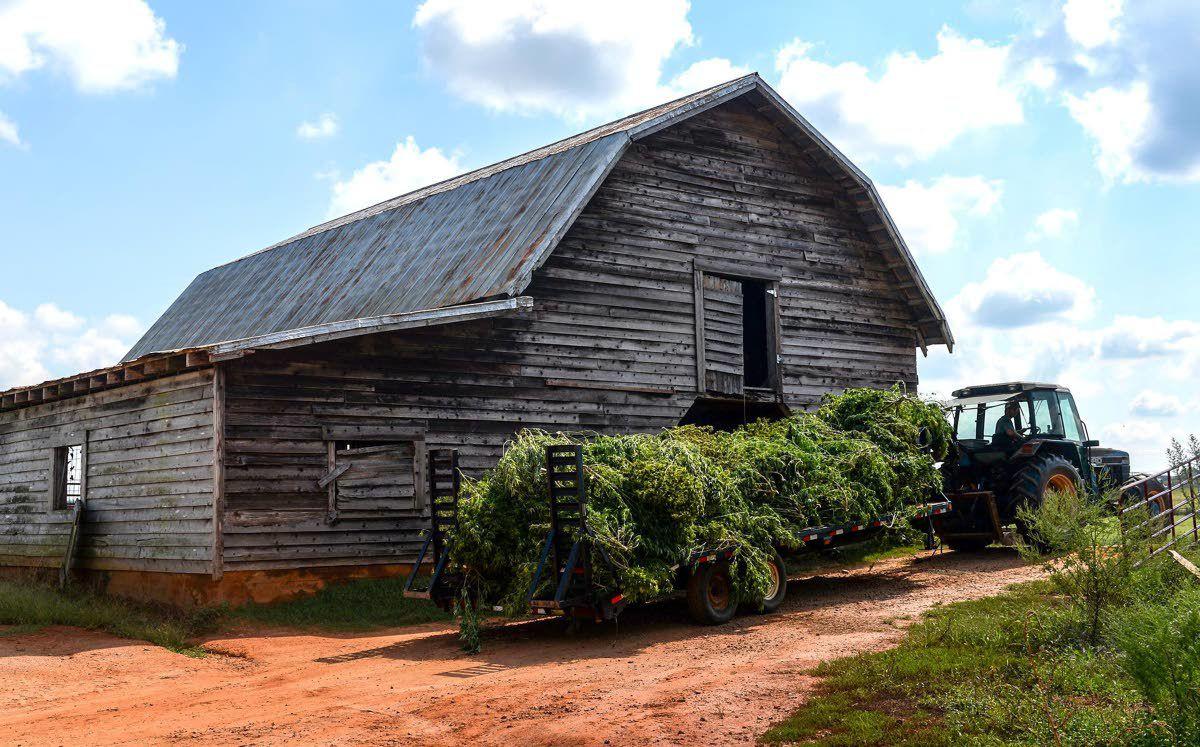 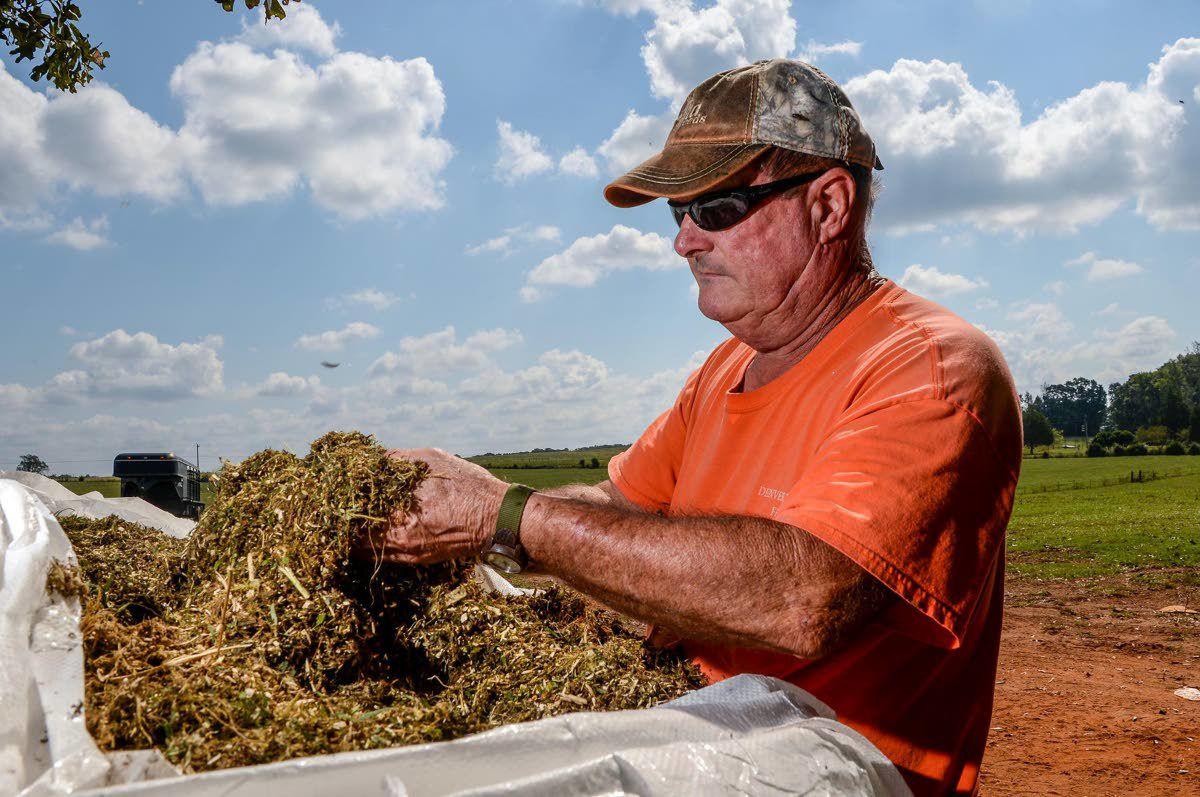 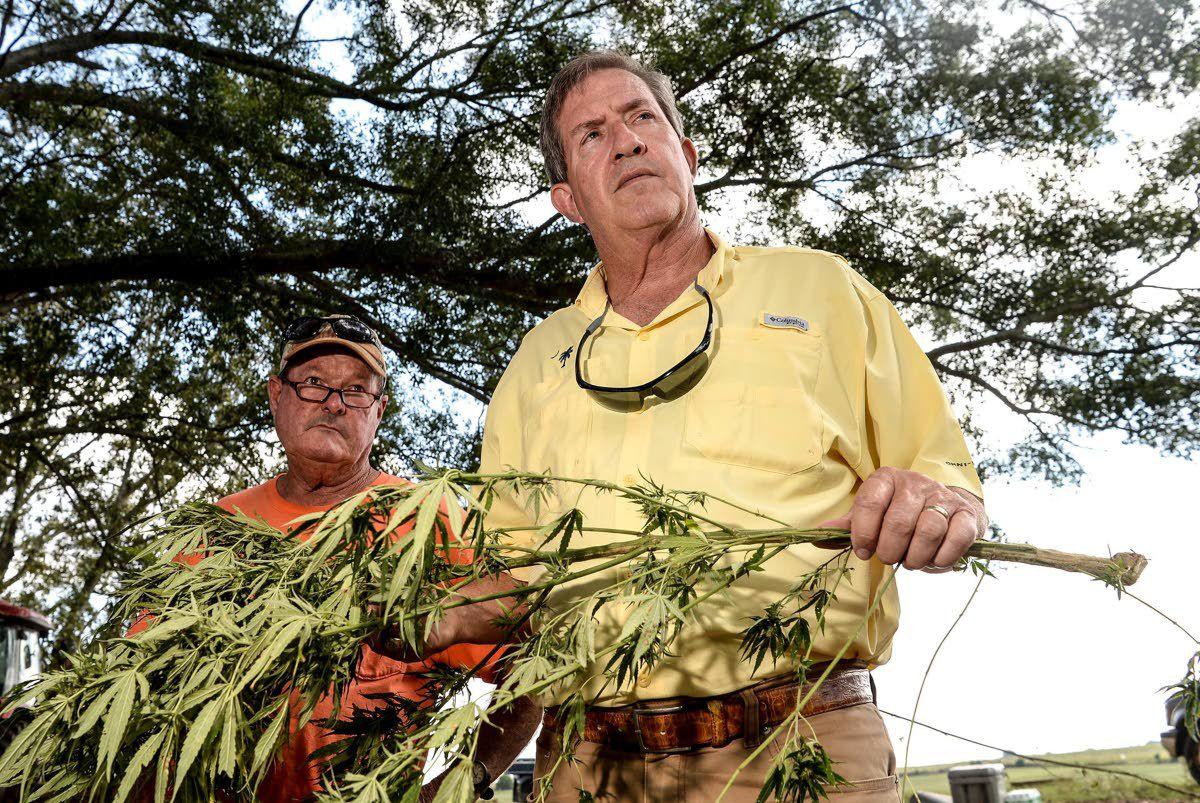 Tom Garrison, left, of Denver Downs Farm in Anderson, good friends with farmer Danny Ford, middle, speaks with Hugh Weathers, right, State Commissioner of Agriculture, during hemp harvest at the Ford farm in Central, S.C., on September 21. Weathers has been visiting the first 20 hemp farms around the state to see how each is processing their plants.

Tom Garrison, left, of Denver Downs Farm in Anderson, good friends with farmer Danny Ford, middle, speaks with Hugh Weathers, right, State Commissioner of Agriculture, during hemp harvest at the Ford farm in Central, S.C., on September 21. Weathers has been visiting the first 20 hemp farms around the state to see how each is processing their plants.

CENTRAL, S.C. — Tom Garrison wants you to know he’s a realist, not a pessimist.

But from where he stands — on the 1,000-acre farm his family has worked for 150 years — things are looking bleak.

“I’ve never seen anything like this in my life, with the hemp crop ... and I’ve never seen a more depressed ag (agriculture) economy than I’m seeing right now. It’s just gloom and doom, man.”

In 2018, Garrison, who owns Denver Downs farm in Anderson, S.C., was one of the first South Carolina farmers to be issued a hemp license.

“I just was trying to be an entrepreneur just like my dad was,” Garrison said.

Twenty South Carolina farmers, three from the Upstate region, were awarded the first round of permits by the South Carolina Department of Agriculture to grow no more than 20 acres.

This year, that number doubled to 40 permits.

Immediately, farmers like Garrison faced steep learning curves because of a lack of knowledge about the plant, high up-front costs and a fledgling processing industry needed to get the crops onto retail shelves.

Hemp is a derivative of cannabis sativa, the plant that produces marijuana. Hemp is low in THC, a chemical that gives marijuana many of its psychoactive effects, but high in CBD, a chemical believed to have many medicinal purposes.

Industrial hemp can also be processed for manufactured items, like fabric and car door paneling.

The plant was heralded as South Carolina’s next cash crop when the state legalized hemp farming in 2018; the emerging $1.8 billion CBD industry offered promises of long-term success for family farmers.

David DeWitt, who heads the hemp educational program at the Clemson Extension Program in Lee County, said he has heard the harvested crop selling to processors for anywhere from $15 to $60 a pound.

Garrison said the average yield is about 750 pounds of hemp per acre, but that number can vary widely depending on how much of a crop makes it to maturity.

Hemp seeds must be planted in pesticide- and chemical-free soil, and crops must be weeded by hand. Extra security measures are typically required, as well, according to the South Carolina Department of Agriculture website.

Since hemp was outlawed in the state for decades, farmers have to buy seeds from out-of-state sellers. Garrison bought seeds for this year’s crop from an Oregon retailer. The packet had a certificate of authenticity from the State of Oregon stamped on it.

The seeds did not take. So, Garrison said eight of this year’s 20-acre hemp crop will wind up in the bush hog, ground into hay, because of it.

Processors extract the CBD from raw hemp through a refinement process, which can be lengthy and expensive, DeWitt said.

The influx of South Carolina hemp growers has overwhelmed many local processors, causing a backup of product, according to Garrison, who said he is still waiting for payment after his processor failed to refine his crop last year.

“But there’s not any of my crop leaving my farm this year unless I got money in my hand,” he said.

Garrison added that the processing industry in South Carolina is still in startup mode. He said many of the new businesses popping up across the state have to get infrastructure and machinery in place before any work can begin.

The state department of agriculture is finalizing new hemp guidelines for 2020, to be added in the Farm Bill. Garrison, who heads an advisory board on hemp farming for the South Carolina Farm Bureau, is hopeful the changes to the bill will put checks and balances into place to protect farmers.

“But until all the kinks get worked out and all these bad players fade into the sunset, it’s going to be a lot of growing pains.”

Eventually, Garrison said, he thinks hemp will become profitable. He’s not sure how long that will take, though.

“I hope I live long enough to see it come to be a profitable crop. Who knows? It may end up like tobacco; It may be a contract crop, it may be a quota crop.”

A quota crop is one in which the government restricts how much a farmer can produce.

Garrison said he’ll probably be the last of his family to farm the land his ancestor, W.D. Garrison, settled on in the 1860s.

But for now, he’s forging ahead.

“I’m optimistic that farmers are smart enough to figure this out. Yeah. And even though a lot of people have been taken advantage of, that’s not gonna last much longer.”