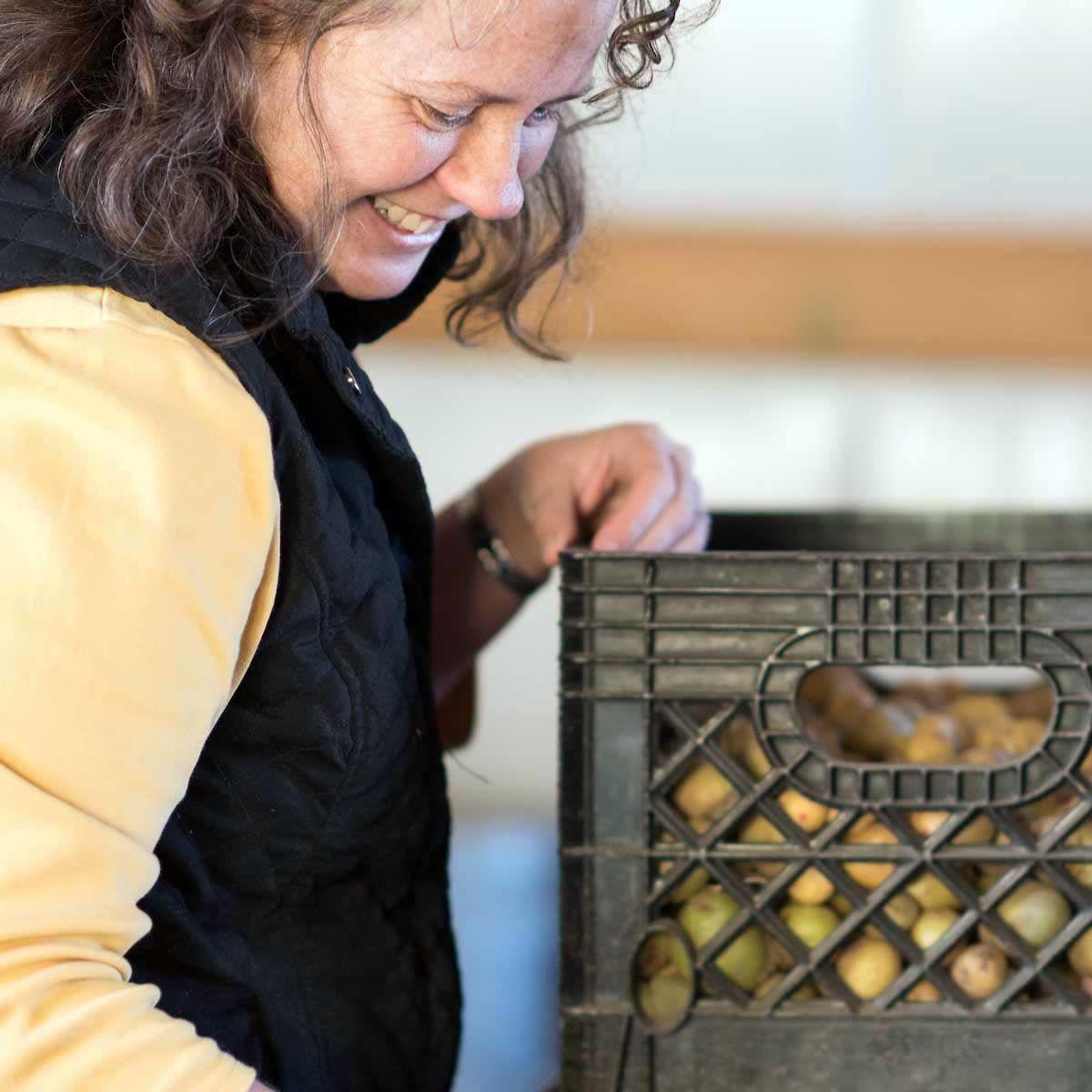 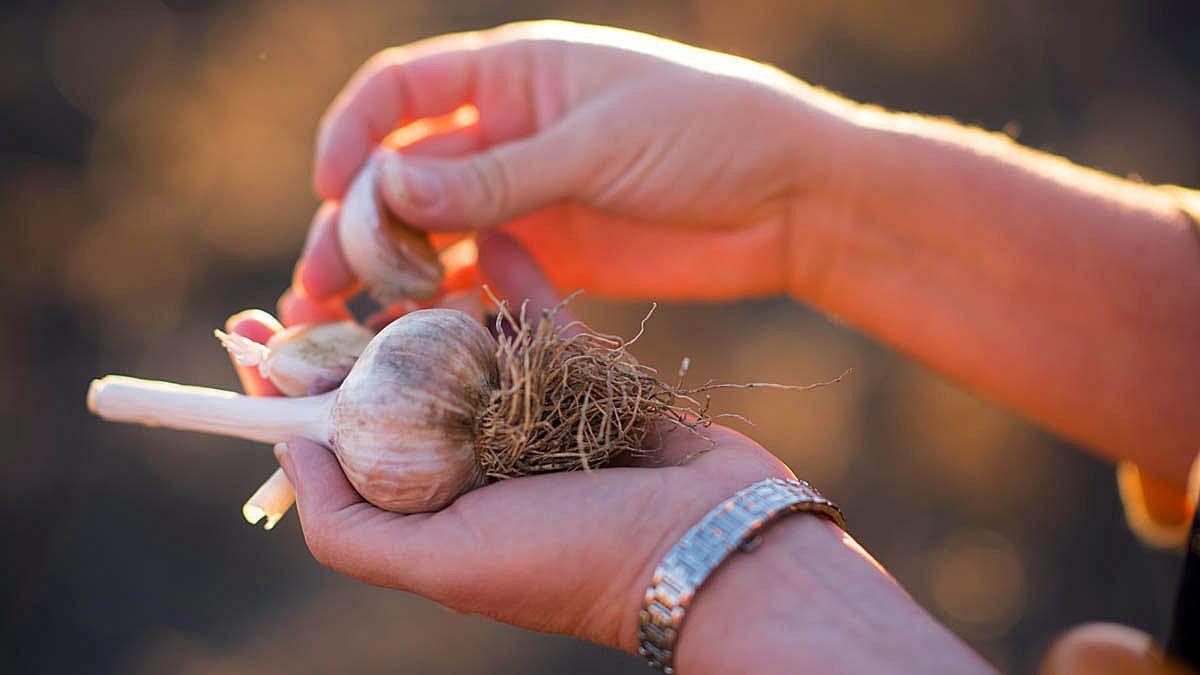 Johnson-Maynard peels apart garlic for planting at U of I’s Soil Stewards Farm. 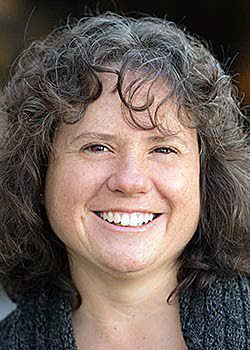 Johnson-Maynard peels apart garlic for planting at U of I’s Soil Stewards Farm.

Jodi Johnson-Maynard became a soil scientist so she didn’t have to decide between chemistry, biology and physics.

“In an odd way, it was my lack of focus within the sciences that drew me to the subject,” said Johnson-Maynard, who is department head of Soil and Water Systems at the University of Idaho. “When I took my first soil class, I realized I needed to integrate all these different fields of science to understand how the system works.”

Johnson-Maynard didn’t start her career in agricultural fields, instead focusing on forest systems for her master’s at Idaho. In a portion of the Clearwater National Forest, she found ferns growing in the sunny openings created by fallen trees were chemically altering the volcanic ash soils to such an extent that local conifers couldn’t grow back.

“This study set the tone for the rest of my career,” she said. “I’ve tried to focus on the impact plants and soil organisms have on soil process.”

After finishing her doctorate at University of California, Riverside, Johnson-Maynard returned to the Palouse in 2000 to join Idaho’s College of Agricultural and Life Sciences.

“I saw the need to work in agriculture, because of the rather complex challenges that growers face in managing their soils,” she said. “They want to know how their conservation efforts affect the earthworms and other beneficial organisms and the overall health of the soil.”

Right now, growers are asking questions about the resiliency of their soils and climate variability.

From my experience, farmers have become more proactive in the area of soil conservation. They are now pushing researchers to answer tough questions regarding conservation efforts such as the use of cover crops,” Johnson-Maynard said. “It’s a really challenging and exciting time. The farmers want to know how everything will affect not just their bottom line this year, but also their soil health and fertility 20 years from now.

To answer their questions, Johnson-Maynard has turned to earthworms. Previous research elsewhere shows an increase in earthworm density can provide a roughly 25 percent bump in crop yields through their influence on soil structure and chemical processes. In addition, Johnson-Maynard has found different types of tilling influence the species and number of earthworms in the soil.

To study the intersection of climate and earthworms, Johnson-Maynard joined the Regional Approaches to Climate Change in Pacific Northwest Agriculture (REACCH) project, a $20 million endeavor led by UI researchers to ensure the sustainable production of regional cereal crops. The region’s growers produce more than 130 million bushels of wheat each year, and climate models predict the region will likely experience an increase of 3.3 degrees Celsius by the end of the century.

“We have to be prepared for the future,” she said. “Already, our farmers are having issues such as planting on time and water availability.”

A Worm’s View of Climate Change

As part of REACCH, Johnson-Maynard surveyed Palouse earthworms and only found species that were exotic — not native to the region. Individual earthworm species were not distributed evenly across the REACCH study area, instead living in soil types that favored their needs.

“The REACCH earthworm survey was important to show that under certain climatic conditions, you won’t have earthworms, and, in others, you are going to have only certain types,” Johnson-Maynard said.

Now that the team knows where the earthworms are located, Johnson-Maynard plans to investigate how the worms interact with plant roots and nutrient cycling. She is now working on how the earthworms are affecting the availability of soil nitrogen.

The survey results can also be used to determine how climate change is likely to affect where the various species of earthworms will live in the future. Johnson-Maynard suspects drier climates will result in a loss of certain earthworm species.

Overall, REACCH found local conditions for wheat production will likely remain similar, and average yields may even improve slightly through the middle of the century, said Sanford Eigenbrode, a distinguished professor in the Department of Entomology, Plant Pathology and Nematology and director of REACCH.

“We don’t have a four-alarm fire in the near-term in terms of viable wheat production regionally,” Eigenbrode said. “But challenges for long-term sustainability are expected and may be exacerbated if we allow our soils to become more depleted.”

The outputs for REACCH include “Advances in Dryland Farming” — a 600-page manual for growing wheat sustainably in the region, published through Washington State University Extension. In addition, Johnson-Maynard worked with colleagues in the Department of Agricultural and Extension Education at Idaho to develop curricula based on the science and practice of wheat and cereal production as climates change.

“We wanted place-based curricula for fourth graders and high schoolers in Oregon, Washington and Idaho,” Johnson-Maynard said. “Even students with no direct connection to agriculture, but who are surrounded by crops, should understand what is happening in the fields and how food is produced.”

One of the results from the REACCH findings concern Johnson-Maynard. The study suggested changing climate may lead to an increase in fallow fields, and fallow fields experience high erosion rates — a change that could lead to declines in soil health.

Johnson-Maynard is leading a new $3.4 million project, known as Landscapes in Transition, to study alternative crops farmers could plant to protect their fields instead of letting them sit fallow. Because many standard cover crops don’t fit well into the growing season on the Palouse, her team is studying a few different options — including cover crop mixes for grazing and winter pea species.

“We want to provide all the information growers will need to use these alternative crops, and the crops’ impacts on factors like pests, weeds and soil health,” she said.

When Jodi Johnson-Maynard started studying earthworms, the giant Palouse earthworm was a legend. Scientific papers from the 1800s described the 3-foot, spitting, lily-scented native worm, and a few people claimed to find some in the 1970s, but the creature then disappeared.

“Most people thought it was long gone and extinct, or it never existed in the first place — the Loch Ness monster of earthworms,” said Johnson-Maynard, department head of Soil and Water Systems at the University of Idaho.

While looking for earthworms in native Palouse grasslands near Albion, Wash., Johnson-Maynard’s graduate student found one of the legendary creatures. Once people learned of the discovery, the worm’s popularity sky-rocketed, making the news and even the “Colbert Report.”

“I still have people ask about the giant Palouse earthworm,” Johnson-Maynard said. “In the long run, I think we were able to get a lot of people engaged in our work and that was huge, because it is hard to do earthworm surveys. It’s very tedious and expensive and additional eyes on the ground helps.”

In addition, they were able to correct a few myths about the legendary worm. The giant Palouse earthworm turned out to span around 14 to 15 inches at most, was more inclined to slowly vomit than spit, and Johnson-Maynard is still waiting for the worm to make her lab smell like flowers.